Ancient Journalists were much more freer to opine than the modern media allows today. For fear of lawsuits, even the descriptions of fugitives have to be watered down, without mention of looks and ethnicity. Old newpaper stories, adverts and editorials are very entertaining sometimes, due to that difference because they did not have to be politically correct.

One of the horrific stories involving local persons was the murder of James Russell by Mark Kiser in 1842.

James Semianes Russell was born on January 14, 1788 along the Rocky River in Cabarrus County, North Carolina to David and Elizabeth Morrison Russell. On February 8, 1809, he married Margaret "Peggy" Gingles in Mecklenburg County, North Carolina. She was the daughter of John Gingles and Rachel Morrison Gingle. Due to the Morrison connection, they may or may not have been related.

According to records, James and Peggy had a large family:
-Rachel Lucinda
-Elizabeth Matilda
-Jane Malinda
-David Green (2)
-John Gingles
-Mary
-James Allison (2)
-Robert Lee
-Margaret M.
-Nancy
-Catherine Rossanna
-Harriett
and a son who lived long enough to marry in 1836 known only as "C" Russell.
The 'two's above signify that they had two sons with each of those names. The Russells had the curious of habit found in that era of naming a child for a dead sibling. The first David Green Russell died at age 3 in 1817. His sibling David Green Russell II was born in 1819 and died in 1895. The first James Allison Russell died at the age of 2 in 1826. His same-named sibling was born in 1828 and died in 1890.

Margaret Russell is shown with the younger children in the 1850 census living with the McEachern family.
And the act that made her a widow: 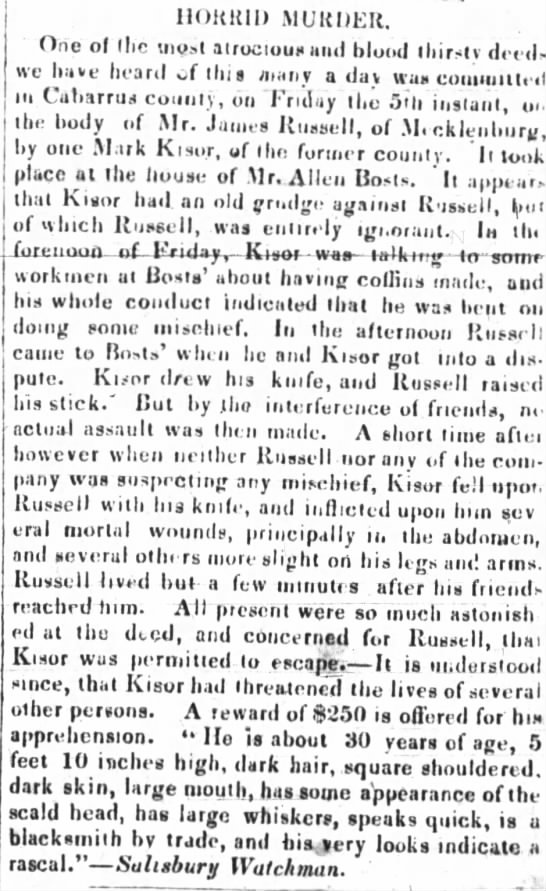 The description of Mark Kiser is very detailed and gives an opinion that would never flush today, "his very looks indicate a rascal." How judgemental (smirk). Scald head is a term we don't hear today for an ailment that is no longer common, if it still exists at all. Merriam-Webster Online Dictionary defines "scald-head" as thus:
archaic

:  any of several diseases of the scalp characterized by falling out of the hair and by pustules the dried discharge of which forms scales.

Mark Kiser went immediately into the the life of a fugitive and a reward was offered for his whereabouts.

News of the manhunt for Mark Kisor and the atrocious murder of James Russell spread far and wide, the following was printed in The Baltimore Sun, Baltimore, Maryland and The Times-Picayune, New Orleans, Louisiana.
Mark Kisor article

In the Book "Families of Cabarrus County, 1792-1815" by Kathleen Marler, it has the following listing:

1790 George and Mary owned land in the branch of Meadow Creek and Canada Branch on the north side of the Rocky River in 1799. Conveyed land to David Kiser in Oct 1805 on Rocky River. 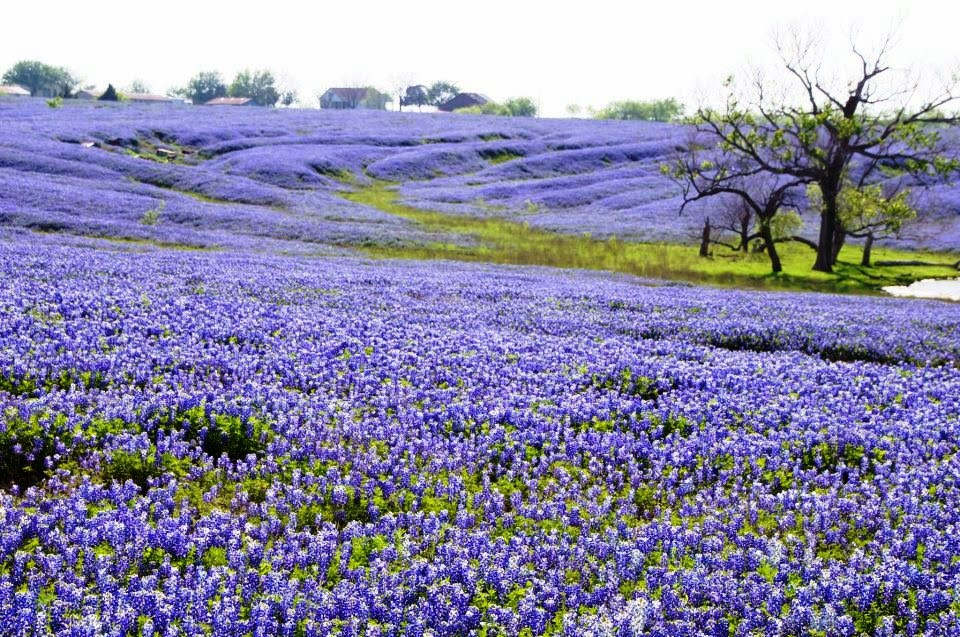 George Marcus Kiser or Kisor or Kizer, aka "Mark" was born about 1814 in Cabarrus County to George Alexander Kiser, Jr. and wife Deborah Weatherford Kiser. George A. Sr. and wife Mary Dove Kiser were his grandparents. He married Mary Ann "Polly" Crayton and had two children, Martha and James E Kiser. Mary must have been pregnant with James E when the horrible event occured, as he was born in 1843.

The sad young man became a Civil War casualy, just one of many from Cabarrus County.

According to research of descendants located on ancestry.com, Mary Ann "Polly" Crayton Kiser wasted no time after the disappearance of Mark Kiser and remarried a gentleman from Stanly County, North Carolina, by the name of  Andrew Jackson Huneycutt. I don't wish to counter anyone else's research, however, but on a timeline, I don't believe this connection works out to be the same Mary Ann "Polly" Craytons. I would  think more likely that they were two different Polly Craytons.

The sons of James S. Russell either publicized the award offered by the Governor, or submitted one of their own, and advertised far and wide for the apprehension of the murderer of their father. This ad was place by David Green Russell and Robert Lee Russell.

$250 Reward
Stop The Murderer
The above reward will be given for the apprenhension and delivery to the
sheriff of Cabarrus County, North Carolina for a man by the name of Mark
Kisor who committed and atrocious murder upon the body of James S. Russell
of this county on the 5th instant at the home of Allen Bost in Cabarrus
County. Said Kisor is about 30 years of age, 5 ft. 10 in. high, dark hair,
square shouldered, dark skin, large mouth and has some appearance of scald
head and large whiskers, speaks quick, is a blacksmith by trade and has the
very looks to indicate the rascal. He was badly dressed in homespun, but it
is presumed he will change his clothes. He wore a new pair of broguce with
stays around the heels. He is so much in the habit of carrying his rifle
that it is supposed that he will take it with him, it has a plain stock and
double trigger - he has a common case knife around in the shape of a butcher
knife attached to his pouch by his leather string through the handle. He has
a brother living in Georgia and two sisters in Mississippi one of them
married to Parrot Evans and the other to a Collins formerly of Anson County
where he will no doubt attempt to go. Kisor is fond of drinking and when the
least tight he is in the habit of singing dirty blackguard songs such as
nine times in the night, etc. Anyone apprehending said Kisor and delivering
him as above shall receive the reward.
David G. Russell
Robert L. Russell
Mecklenburg County. August 9, 1842

Having sister Phoebe in Itawamba County, Missisippi and sister Susan in Alabama and sister Sarah in Georgia and brother Archie in Georgia, Mark Kiser had multiple possibilities of places to run, wherein no one would no of his evil deed. No newspaper accounts or records indicate that he was ever caught or found. As it was easy in those days, especially for a man with a skill, to reinvent themselves, he may have made his way south or west, changed his name and started over with a new life and perhaps even a new family. One day a DNA test may connect western descendants with a Kiser family from North Carolina and the contributors will have no idea why or how.

In the meantime, I found it rather morbidly humorous that the sons of James S. Russell would add to the description of Kiser as being "fond of drinking and when the least tight he is in the habit of singing dirty blackguard songs such as 'Nine Times In the Night'." Below are the lyrics to that obvious ancient tune. I can imagine some man being arrested in 19th century Carolina for singing that bawdy lyric and charged with murder. And somewhere, a stocky,  bearded blacksmith, who called himself Joseph Foy or possibly Bynum Reed, mysterious neighbors of Mark Kiser's siblings, may have continued singing that song.

Another interesting aside, on the subject of the Kiser siblings neighbors was a ninety-year old farmer from North Carolina named Valentine Vanhoose. Anyone who has dug through land records or other documents of revolutionary era Anson/Montgomery counties that predated Stanly, has encountered the name of Valentine Vanhoose. I can't imagine a man of that advanced age in that day and time traveling to a far state prior to the era of train travel to start up a new farm, yet this nonagenarian is listed alone in his household as a farmer. Could it be the same Valentine? Hmmm. He's living next to people from this area originally. I'll have to look into that. liFind a Grave link to Memorial of Phoebe Kiser Colns Find a Grave link to Memorial of Sussanah Kiser Evans

Find a Grave Link to Memorial of Archibald Kiser

A rambling young sailor to London came down,
He'd been paid off his ship in old Liverpool town.
When they asked who he was, well, he answered them, “Right,
I do belong to a family called nine times a night.”
A buxom young widow who still wore her weeds,
Well, her husband had left her his money and deeds,
And resolved she was on her conjugal rights
To soften her sorrow with nine times a night
So she sent for her serving girls Ann and Amelia
To keep a look out for this wonderful sailor.
And if ever by chance he appeared in their sight
They should bring her the glad tidings of nine times a night.
She was favoured by fortune the very next day,
These giggling girls saw him coming their way.
And upstairs they rushed full of amorous delight,
“ Oh, here comes that bold sailor with his nine times a night.”
Well, she danced out of bed and she pulled on her clothes
And down to the hall door like lightening she goes.
And she viewed him all over and gave him a smack
And the bargain was struck: no more sailing for Jack
Well, the wedding was over, the bride tolled the bell,
Jack trimmed her sails five times and that pleased her well.
She vowed in her heart she was satisfied quite
Yet she still gives sly hints about nine times a night
Says Jack, “My dear bride, you mistook me quite wrong,
I said to that family I did belong:
Nine times a night's a bit hard for a man;
I couldn't do it myself, but my sister she can.”

A handsome young sailor to London came down,
He'd been paid off his ship in old Liverpool town.
They asked him his name and he answered them, “Quite,
I belong to a family called nine times a night.”
Well a handsome young widow who still wore her weeds,
Her husband had left her his money and deeds,
Resolved she was on her conjugal rights
And to soften her sorrows with nine times a night.
So she's called to her serving maids Ann and Amelia
To keep a watch out for this wonderful sailor,
And if ever he happened to chance in their sight
To bring her fond tidings of nine times a night.
She was favoured by fortune the very next day
These two giggling saw him coming their way.
They've rushed up the stairs full of amorous delight,
Crying, “There comes that sailor with his nine times a night.”
She's jumped out of bed and she's pulled on her clothes
And straight to the hall door like lightening she goes.
She's looked him once over and gave him a smack
And the bargain was struck: no more sailing for Jack.
The wedding was over, the bride tolled the bell,
Jack trimmed her sails five times and that pleased her well.
She vowed to herself she was satisfied quite
But she still gives sly hints about nine times a night.
Says Jack, “My dear bride, you mistook me quite wrong,
I said to that family I did belong:
Nine times a night's a bit hard for a man;
I couldn't do it myself, but my sister she can

Posted by Jobs Children at 9:34 AM