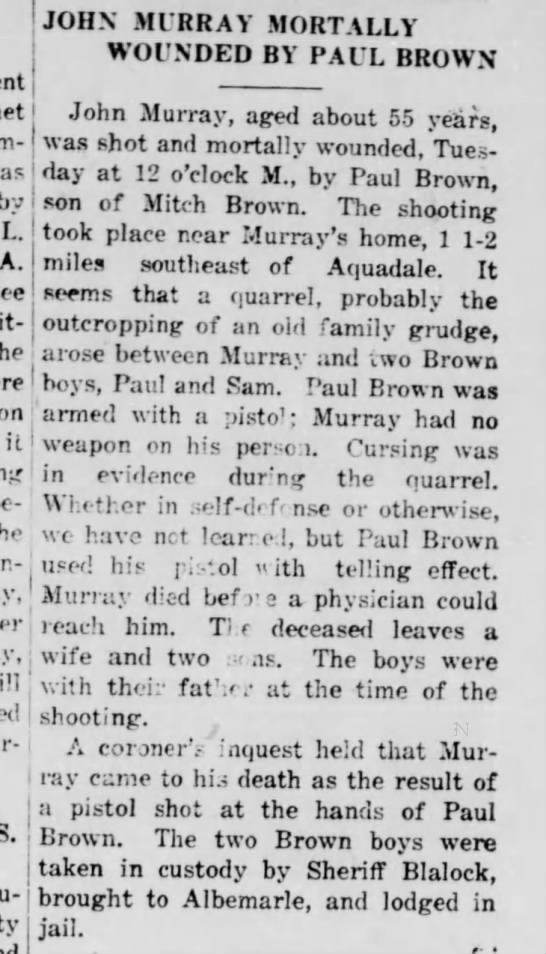 John Murray was a member of the Murray family I've written of before. He was the great nephew of my third great-grandmother.

John was one of the sons of Edmund Murray/Coley and Catherine Ledbetter Murray. Edmund was the son of Benjamin Murray, son of Stanly County Murray patriarch Jesse Murray and a daughter of George Coley. I believe her name to be Francis or Fannie, but that is not for certain. What is certain is that Edmund Murray was a good man, and his surname, and that of his children, swung back and forth as easily as a horse's tail swatting flies in the summer between the surnames of Murray and Coley. Edmund's estate papers reflect as much.  I've documented Edmund in my post "The Man With Two Names".

Edmund and "Katie" had 7 children together, with firstborn daughter Caroline, most likely dying as a child.

Benjamin died prior to his father, Edmund, leaving the two brothers, John and Alex, in the county to dislike each other. Edmund had also had children by a mistress, Beadie Carpenter, and Alex disliked them even more.

A mean streak ran in the Murray line, and sometimes it skipped a generation. As such, it also traveled down the lines of the families who intermarried with and were descended from the Murrays, like the Aldridges, and they were affected by it too.

It ran well through the blood of Old Ben Murray, son of Jesse I, and father of Edmund and it skipped Edmond and went straight to Alex.

Alex referred to his brother roughly and in insultory terms in a few lawsuits. John R. Murray remained just a simple farmer. Although he and his wife Maggie seemed to have some problems. (They married, split and remarried), John did not seem to be the angry sort. Not like A. C.

So it came as a shock to the community when the following newspapers hit the stand. The next article is from:The Concord Times  29 March 1917 • Page 6

The others are from Stanly County newspapers: "The Enterprise" and " The Albemarle Post".

The story of John Murray's murder was reported in all of the local newspapers. The above is the link to the Greensboro paper.

This is the link to the Charlotte version. 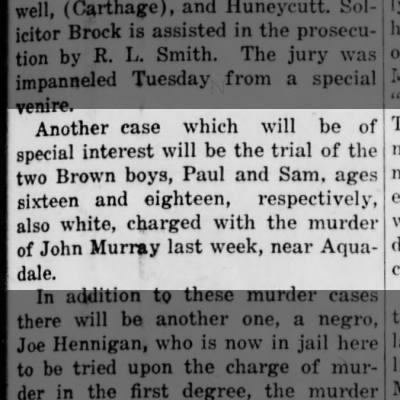 So who were these "Brown" boys, teenagers, only 16 and 18, who were the murders, and what was their motive?

It begins, in a way, with this advertisement: 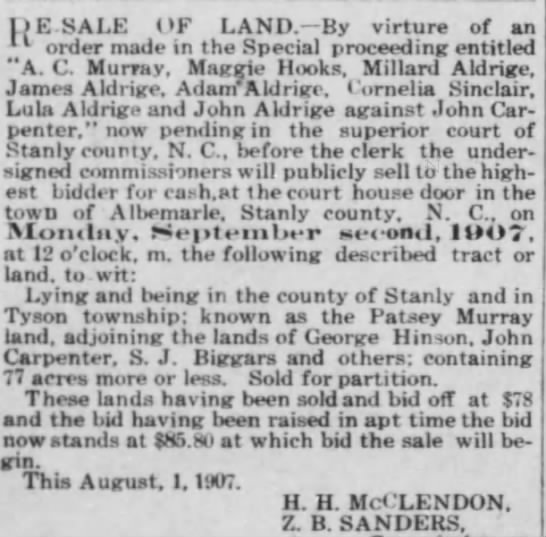 To explain the characters who played a role in the above drama, they are all descendants of Edmund Murray/Coley. A. C. Murray, was of course, Alexander, the oldest son. Maggie Hooks, was the youngest daughter, and sister of A. C. Murray. Millard, James, Adam Aldridge, Lula Aldridge and Cornelia Sinclair, were the children of deceased sister Francis Murray who had married William Edward "Will Ed" Aldridge. The name "John Aldridge" was an error on the part of the newspaper. In the actual court papers, it is referring to "John Sinclair", the husband of Cornelia Sinclair.

The problem appeared to lie in the fact that Edmund Murray/Coley, had not one, but two families. In his estate papers there was a division of property concerning a tract of land of 77 acres referred to as "the Patsy Murray lands." The division was set out as "A. C. Murray  1/4, Maggie Hooks 1/4, John Carpenter 1/4, Millard Aldridge, Adam Aldridge, James Aldridge, Lula Aldridge and Cornelia F Sinclair with John Sinclair 1/5 of 1/4 or 1/20th.

To explain the Patsy Murray lands, we have to go back another generation. In 1863, Benjamin Murray had conveyed this same 77 acres to James A. Ross. He then, according to the records of Green Wesley Simpson, went to Arkansas, along with his children Rebecca Ann Murray Hudson, her husband Henry, his son Jesse and wife Jane, his wife Martha, and at least a few of his nephews, Wesley Murray, son of Mariah, and James Washington Turner, son of Phoebe. There may have been others. 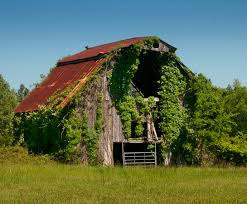 In 1867, Martha Murray had returned, and claimed the same 77 acres as homestead. At her decease, the property was transferred to the hands of Edmund Murray. Now, she was not the mother of Edmund Murray/Coley. She was less than a decade older than he, and he would not outlive her long.

Edmund Coley/Murray seems to be the son of Benjamin Murray and a daughter of George and Mary Coley. Ben Murray would have been 21 at the birth of Edmund, far before his marriage to Martha, so there was no apparent animosity between the two families. Edmund, by all signs left, appears to have been a good man, taking care of Martha aka Patsy, like a son, and taking care of George and Martha Coley in their old age. For love and respect, they had signed their property over to him for a nominal fee, before they died, under condition they live on it and he take care of them, which a later deed proves he did.

So Edmund Murray was a good man. However, he had apparently strayed upon his wife Katie. A single neighbor, Beadie Carpenter, daughter of Thomas Carpenter, had two children, John A. Carpenter and Nellie  Ann Carpenter. John A. Carpenter is the son Edmund Murray Coley, who being illegitimate himself, saw no difference in his legitimate and illegitimate heirs.  Nellie Carpenter, like her mother, also had a child out of wedlock. That child was a daughter, Nezzie Elizabeth Carpenter who would marry Mitchell Calvin Brown and be known otherwise, as "Bettie Brown".

There would be more lawsuits to follow between the 'legitimate' heirs of  Edmund Murray/Coley and Bettie Brown. The above list of grandchildren would be joined by Sarah Coble Broadaway and Amos Coble, children of Edmond's deceased daughter Sarah, who had been the first wife of Israel S. Coble.

Several suits dragged through the courts for years. One of the last was "J. R. Murray and others vs. Bettie Brown and others" recorded on page 467 in the minutes of the July 1904 session.

The Case is a study of it's own, and I will go into it no further here, except to present this long, nearly 20 year arguement as perhaps the motive for the affray at Rocky River Springs.

Betty Brown was the daughter of Nelly Carpenter. Nelly Carpenter was the sister of John A. Carpenter. The suit provides evidence that Betty Brown and her children believed themselves heirs of Edmund Murray. They brought the point home when referring to Alex and John in the suit as "A. C. Murray alias Coley and John R. Murray alias Coley", as if trying to make the case that the right to the name of Murray was up in the air for John, Alex and their whole siblings,  as well, because Edmund, their father, had always had to swing back and forth between both.

Rocky River Springs, in the early part of the century was a popular resort.


This family entanglement, arguement, lawsuits and feud, I believe, was at the core of the "quarrel, probably the outcropping of an old family grudge" that began the violence between 55 year old John R Murray and the two oldest sons, Paul and Sam, of Mitchell and Nezzie E. "Bettie" Brown. Biologically, John Murray was their great-uncle.

Nellie Ann Carpenter may have only had one child, but her daughter Bettie made up for it by having a very large family. Beadie Carpenter, grandmother of Bettie and mother of Nellie and John A., was listed in several papers as recieving county money for her old age and disability.

Mitchell and Bettie Brown had 16 children between them. Paul and Sam were the oldest. 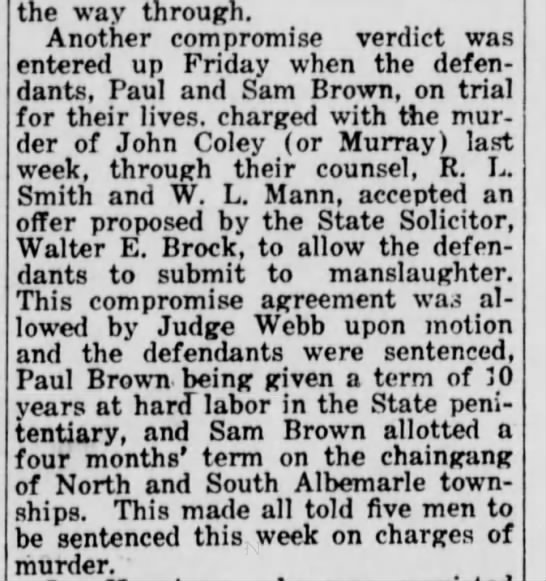 To summarize the whole affair, from all available information, about noon, on Tuesday, March 27, 1917, 53 year old John R. Murray ran into his great-nephews, Paul and Sam Brown, at Rocky River Springs. A heated argument ensued, with colorful language flying back and forth. The quarrel stemmed from an old family grudge, which could have been the lawsuits that had went back and forth between John and others vs the Browns mother and others, the final judgement of which had been settled in 1903 and 1904, when the Brown brothers would have been toddlers.

Paul, admitted to shooting John Murray, whose small son stood witness and took off home. He told his mother, and then disappeared. Paul was eventually found and was sentenced to 10 years. His younger brother Sam,16,  who was just present, was sentenced to 4 months on a local chain gang.

The Brown family removed themselves from Stanly County, first settling in Columbus County, North Carolina, in the Southeastern part of the state, near Wilmington, where they were found in the 1920 census. The Columbus County census stated that the Browns owned their farm. In July of 1917, just months after his sons arrest, M. C. Brown sells Lots 6 and 7 known as cottage sites at Rocky River Springs, to one W L and Mabel D Mann and R L and Ora B Smith, located on block one, on the east side of Albemarle Street 50 feet wide and running 175 feet back to Lee Avenue.

History of the Rocky River Springs from Fish House website

The Brown family is shown buying property in Quewhiffle, Hoke County, North Carolina in 1925, 1926 and 1929. Here they are seen in the 1930 census, and where they remained.

In 1940, they are seen with some of their children and a few of their grandchildren, Pauline Davis and Louis Silverblat, along with Hugh Reynolds Aldridge of Stanly County, son of George, so they still kept in touch with Stanly County people. Other Stanly Countians, like the family of John Teeter Davis, had also moved to Hoke to farm tobacco.
Nezzie Elizabeth Carpenter Brown would die in Hoke County in 1947. Her Husband Mitchell lived another 20 years, dying in 1967 at the grand old age of 90 in Aberdeen, Moore County.

Sam Brown would marry and have his own family and remain in Hoke County, passing away in 1959.

Paul Lee Brown did not stay in North Carolina, but seems to have hit the road as soon as he was free. He only served a fraction of the time he was given for taking the life of John Murray and by 1920 was found in Nashville, Tennesee. He left there and shows up in St. Louis, Missouri, where he obtained his social security number, and married Mary Alice Eldridge in September of 1924.
By 1935, the couple had made their way to L. A., where they settled in for the duration.

John Murray left a widow, Maggie Lingerfelt Murray. Together, they had 6 children:

Daughter Jessie, just one of many descendants of old Jesse Murray named for him and son Pinky Lee Murray are buried in the old Rehobeth Cemetery with many others of the Murray and Aldridge families.

So that is how a multi-generational and decades long family feud ended in tragedy. The hills of the Tyson community in Southern Stanly County was full of stories, and the one of John R. Murray and the Brown brothers was just one of many.

Posted by Jobs Children at 4:34 PM