Old Newspaper articles make for wonderful research clues. After discovery the Estate sale of the property of my Great-Great Grandfather, H. H. Davis by my Great-Great Grandmother Julina Aldridge Davis, I just happened to glance a little bit down the page. And I found this little gem:

Marina had married Thomas Deberry Greene in 1887. He died in 1895, and then in 1897 she married William Crowell Aldridge, a first cousin of Gus Davis and a nephew of my Great-Great Grandmother, Julina Aldridge Davis.

Lila W. Farmer married George Henry Boone, another brother of Julia and J. F. Boone. The Boones were the children of William Boone, the one son that Andrew Boone had left behind when he took off to Alleghany County. Another connection to the Boones was through the Murrays. Andrew had married Martha "Patsy" Murray when his wife Jane Hobbs Boone died, in Stanly County in 1850. The mother of Julina Aldridge Davis was Priscilla Murray Aldridge.

And then comes this pesky newspaper article.
Now, Rilla and G. H. Boone, that would be a typo of Lilla and George Henry Boone. A. H. Farmer, is of course, only son, Adam Huston Farmer.

Now, if it had not been for another document I have seen, I would have been really confused.
When I first began researching the children of E. W. Davis, I could not find his family in the 1910 census, the year before Nannie died. Then, while looking at the actual document, I came across J. T. Crump Jr. living right next to J. T. Crump, his daughter Vinia, and Ouisa Stewart, daughter of Sarah Hortense Davis Stewart.

This J. T. Crump Jr. was the same age as J. T. Davis. His wife was Nannie Davis, the same age as Nannie Farmer Davis, and they had a five year old son, Dewey, who was George Dewey Davis, born Oct 1, 1904.

This was clearly John Teeter Davis and family, but why had he given his name as Crump? I just brushed it off as an enumerator error, but secretly began wondering, and actively seeking, what did the "T" in John T. Crump stand for?

Edward Winfield Davis was born on December 3, 1811. He was the second sheriff of Stanly County, North Carolina, and a most eligible bachelor for most of his life.

He must have decided one day, later in life, that he wanted an heir, or a young wife to take care of him. He had hired servants until then, and probably had not felt the need. So at the tender age of 56, E. W. Davis took his first and only bride, Rebecca, daughter of Solomon Hathcock and wife Lavinia Rummage Hathcock. 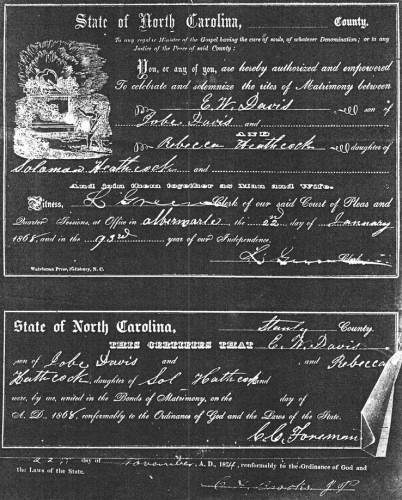 Rebecca was only 18 years old. It was not unusual in those days,  post-war, and reconstruction of 1868, for young girls to marry old men, as there were a shortage of men. What war had not taken, many had lunged West, looking for peace, fate and betterment. And E. W. Davis, a land owner, businessman, politician and merchant, was a good catch for a lady. She would be well-suited and would live comfortably. Before his death on October 30, 1882, Ned Davis, as he was known, watched his wife bring three heirs into the world. Sarah Hortense Davis was born on January 26, 1869, a year after the marriage. 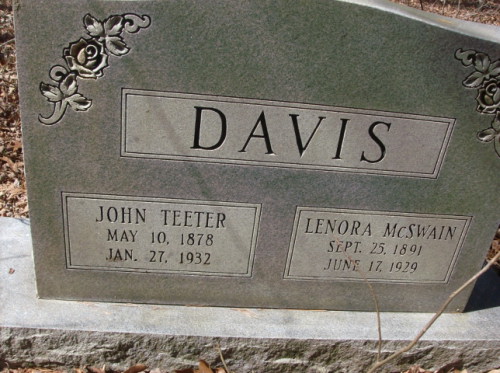 He and Nannie only had the one son, Dewey.

He and his second wife, Jennie Lenora McSwain would be married the longest and have 7 children: Ray, Christine, Maxine, William Wooten, Esau and Jewel.

When Nora died, Dewey and Ray were old enough to be on their own and take care of themselves. Baby Jewel would grow up with her uncle, Travis Crump's family and the 4 middle siblings, Christine, Maxine, Woot and Esau were sent to the Barium Springs orphanage.

John T. Davis would meet a boarder at the home of his younger brother, Travis Crump, Valedia Kinney of Davidson County, and enjoy a brief marriage with her before his death. She would bear a set of twins, James T and Jennie Lee Davis, born 4 months posthumously past their father's death.

Afterwards, she would have 2 more children: Travis Millard Crump on September 24, 1884, a year after her marriage and a daughter she named for her mother, Lavina, in 1889. In no other census, but the 1910 one, does John Teeter go by the surname "Crump". His marriage licenses and death certificates all designate him at "Davis". 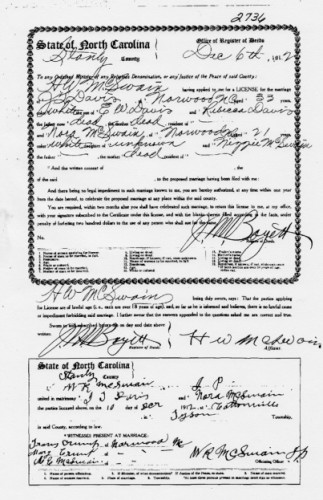 E. W. Davis was 66 when John Teeter Davis was born. His wife was 27. She had not had a child in 6 years. Was this last one a result of a young wife married to an old man, who falls in love with someone more her age? Or just a stepchild being raised by a stepfather and taking that surname at times?

The other two children of E. W and Rebecca, Thomas and Hortense, are never seen as anything but "Davis".

Then there is the fact that John T. is also seen as John T. Crump Jr. One article I had seen had him and his brother as "Tom Davis and J. T. Crump of Rocky River Springs".

Behind every answer is more questions.

Posted by Jobs Children at 8:25 PM