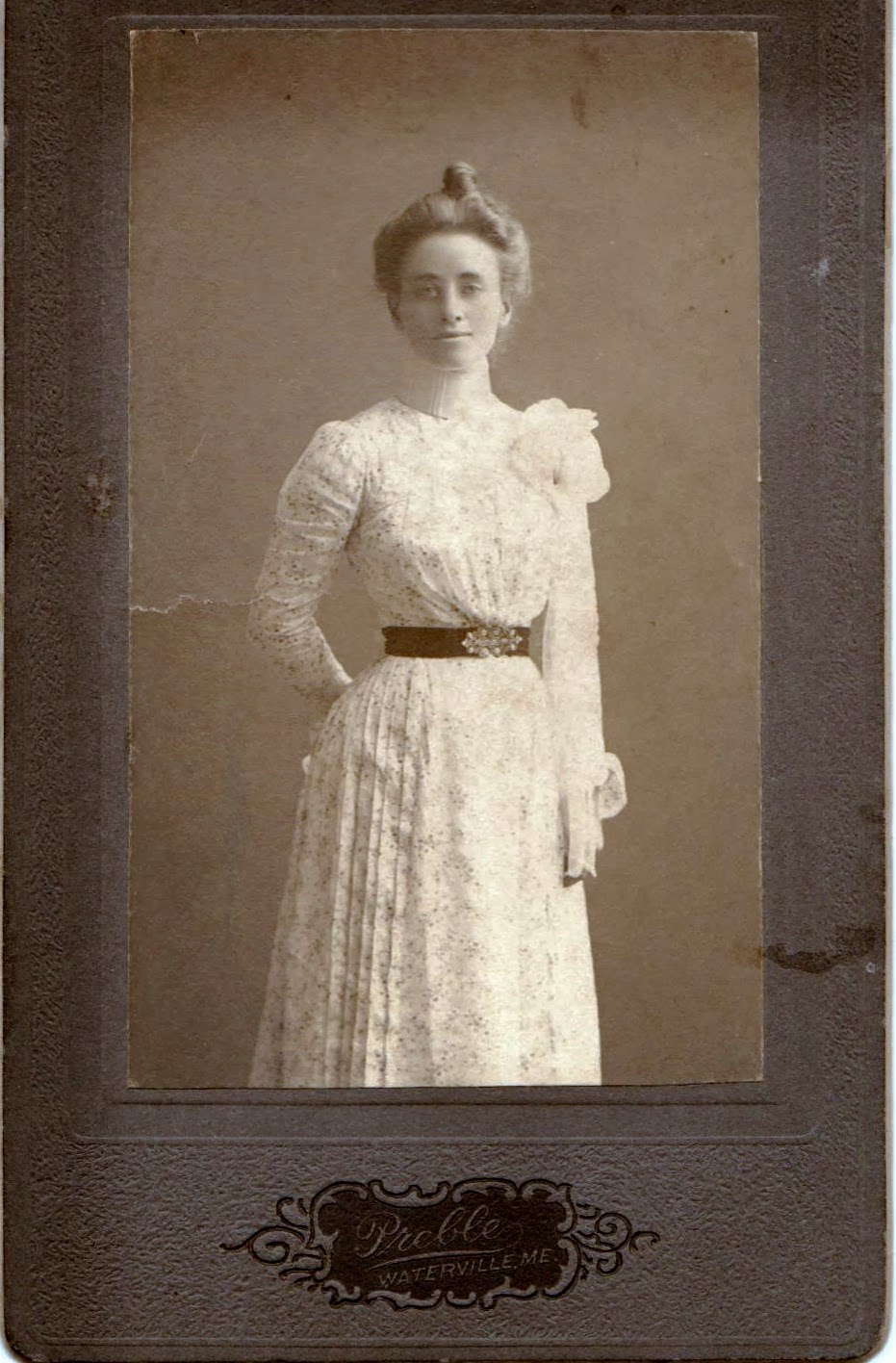 The young woman gazes wistfully into the camera. She is dressed in an elegant light floral print lace dress. A lace rose adorns her left shoulder and the high collar climbs uncomfortably to her chin. A black belt with a jeweled broach clasp adorns and accentuates her miniscule waist. Proper ladies of the day were covered head to toe, but the "Barbie Doll" physique was still the ideal.

In the black and white photo, her hair appears to be a light brown, but it could have been an auburn. Her eyes are clear, and not dark, meaning they were blue or a light green or gray. All girls and women of the day, after hitting their mid to late teens wore their hair up, no matter their class or status. Hers was in a unique roll, perhaps a local fad of the day.

Perhaps she was a bride-to-be, or perhaps her father commissioned the portrait in hopes that she would become a bride.

With her right hand placed demurely behind her back, her left one hangs loose at her side. At first glance, the hand appears odd, wooden or strange. Upon examination, it appears that is only the lace cuff of the dress, covering most of her hand, her hand clinched closed, only the knuckles show.

The embellishment at the bottom of the paper frame states that the photographer was Preble of Waterville, Maine. There is quite a bit to be found on the internet about S. L. Preble and his photograpy studio, and photos across the country attributed to him, but the vast majority in Waterville.

This young beauty in unnamed, only the initials "JAF" are on the back. Were these her initials? Perhaps she was a Jane, or a Julia or a Janette. Her mother's generation bore the elegant names of Susanna and Tabitha, but by her generation, Clementine had became "Tiney", Florence had become "Flossie" and Harriett had became "Hattie". Her daughters, if she would have any, would be the generation of Myrtle and Ethel and Pearl. Her sons, should she be blessed with any, could have been Walter, or Harvey, or anything ending in "bert".

The family this photgraph was in the possesion of was centered in the gold-belied area of where Stanly, Rowan and Cabarrus Counties all come together. It was suggested she was a member of the Mauney family, who were also members by marriage of the Davis family.

Valentine and Ephraim Mauney were brothers who were born near King's Mountain in Lincoln County, and then came first to Mecklenburg and Cabarrus Counties, and married McMackin sisters in Rowan. After the McMakin sisters had passed away, leaving both Mauney brothers widowers with young children, the apt merchants and businessmen both took daughters of James M. Davis and Rowena Lee Davis as their second wives. Ephraim married Elizabeth Jane Davis and Valentine married Winifred Catherine Davis, often seen as "W. C." or "Winnie". Jane and Winnie were grand-daughters of Job.

The beauty in the photo was not a common girl. She was without a doubt a member of an elite family. She did not work on a farm or a mill. She may have been in college, or about to attend. By this age, she would have no doubt received a good education, perhaps in a girls academy.

Was this young lady a member of the Mauney or Davis families? Had she maybe made a trip to Maine for a vacation or tour or educational opportunity, or had Mr. Preble, renowned photographer toured the South and came maybe, to Salisbury or Charlotte, looking for models for his art?

It was also suggested that she was a Misenheimer, or a Huneycutt that married into the Misenheimer family. But did the Misenheimers have the money and prestige that the Mauney's had?

The names of Ephraim and Valentine are all over the court records and land records of Stanly and Cabarrus Counties, and Rowan and Mecklenburg as well. Valentine was an unscrupulous businessman. He used his money to make money. He had it. He loaned it. And if he was not repaid in a timely manner, he took no pause in calling to collect what was legally his. He showed no mercy.

Ephraim appeared to be a shade less ruthless, however, both brothers invested in several mining companies within the three counties and in Gold Hill, in Rowan County in particular.

The family of Ephraim Mauney is buried at the Gold Hill cemetery in Gold Hill, North Carolina, while Valentine and W. C. Mauney are buried just down Hwy 52, a little ways in New London, Stanly County, North Carolina.

Was the Beauty in the picture a member of this enigmatic family and a descendant of Job Davis? Or was she somehow a girl from Maine, whose picture mysteriously ended up in North Carolina? Did she put on her best frock and get her "hair did" at a bid to snare a wealthy husband from a mining mogul or his son?

Perhaps she will remain anonymous. If anyone recognizes this young woman, leave a comment. I'd love to know who she was.

Posted by Jobs Children at 5:02 PM