Henry Melton Jr. was born in  Louisa County, Virginia, around 1739, to Henry Melton, Sr. and wife Mary, who may have been Mary Whicker. He married Agnes Sears, daughter of John Sears and Violette "Letty" Freeman. They had 10 known children: Stephen, Joanna, Sarah, Catherine, Susanna, John, Elizabeth, James, Pomfrett and Henry. Stephen was the oldest son and John was the second oldest son. Joanna was probably the oldest daughter and Susanna probably the youngest. Sons James, Pomfrett and Henry were still minors upon the death of their father around 1807, and were assigned guardians. John would become "John of Montgomery", who was the father of most of the Stanly County Meltons.

Henry's will was short and sweet. He was a blacksmith and appeared to be a 'no nonsense' kind of fellow.

A glimpse into his personality is given through records of the Hicks and Gresham families, into which his wife Agnes's sisters had married.

An Absalom Hicks died in Granville County and left 3 sons: Bishop, Harris and Absalom. Brothers Harris and Absalom, at the ages of 12 and 14, were bound to Henry Melton to learn the art and mystery of a blacksmith. While still a minor and a 'bound boy' of Henry Melton, Harris Hicks ran away and joined the army. He served under John Farrar and enlisted as a substitute for Jeremiah Frazier. Henry's daughter Elizabeth married Jeremiah Frazier. He also served as a substitute during his tour of duty for his uncle, David Hicks, who had a family.

There was a soldier who served with Harris Hicks who gave a deposition that Harris Hicks was in the tour of Charleston and during his service, had been kicked in the leg by a horse, giving him a "very sore leg". According to the depostion, Henry Melton told Harris Hicks "if he had not ran away from him and joined the army, he would not have had such a sore leg and be obliged to undergo the pain and misery of it. He wished for Harris to come work with him in his shop, telling him if he would do so he would learn him a great deal in the trade which he had never learned him." Harris Hicks declined and went on to seek medical care for his ailments. Apparently, Harris Hicks did not like working under Henry Melton, but he must have learned something, as he also became a blacksmith.

The Will of Henry Melton

In the name of God Amen in the year of our Lord One Thousand Seven Hundred and eighty three, I Henry Melton of Granville County and State of North Carolina Blacksmith well knowing that it is appointed for all men once to die and after death Resurection of the body do appoint ordain and constitute this my last will and testament.  (more flowery speech about a Christian burial and wordly goods)....I lend unto my well beloved wife all of my estate both real and personal during of her widowhood and should she marry it is my desire that the estate real and personal be equally divided among my children male and female. (comments about the payment of debts, children never named) I do appoint my well beloved wife Hagai and Thomas Ricks and (name marked out) to be my executors. 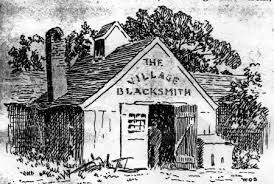 Posted by Jobs Children at 3:07 AM