The Will of Benjamin Faulkner

Benjamin Faulkner hadn't arrived in Anson County long before he thought it wise to order the writing of his will and wise it was.
He dated the Will October the 15th 1783.
Benjamin Falkner does not appear in any census, tax record, grant or deed for Anson County. His will and his being in Anson County is an important clue, however, in my pursuit to untangle the Faulkner family mysteries. 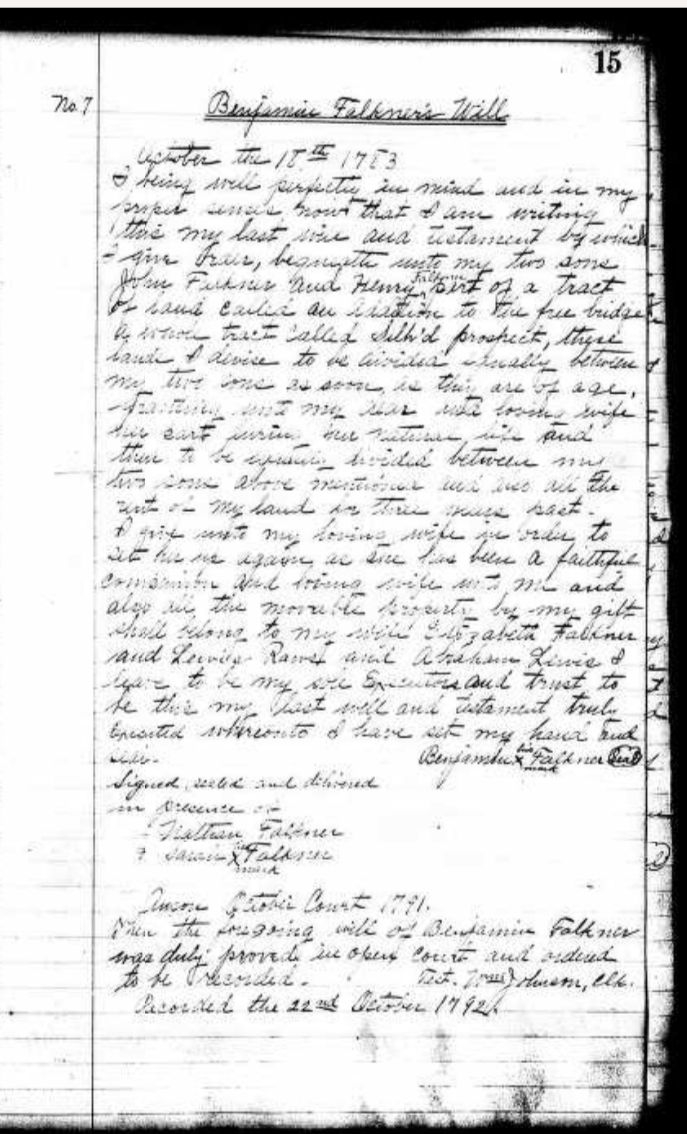 Here, I will attempt to transcribe the will, as the print is fading and in places, difficult to read.
Benjamin Falkner's Will
October the 18th, 1783
I being well perfectly in mind and in my proper senses now that I am writing this my last will and testament by which I give fair, bequeath unto my two sons John Falkner and Henry Falkner part of a tract of land called an Addition to the free bridge a whole tract called Silk's Prospect , these lands I devise to be divided equally between my two sons as soon as they are of age, granting unto my dear and loving wife her part during her natural life and  then to be equally divided between my two sons above mentioned and also all the rent of my land for three years past. I give unto my loving wife in order to set her up again as she has been a faithful companion and loving wife unto me and also all the movable property by my gift shall belong to my wife Elizabeth Falkner and Lewis Raws and Abraham Lewis I leave to be my sole Executors and trust to be this my last will and  testament truly executed whereunto I have set my hand and seal.
Benjamin Falkner (his mark)
Signed, sealed and Delivered
in the presence of
Nathan Falkner
& Sarah Falkner
Anson October Court 1791
Then the forgoing will of Benjamin Falkner was duly proved in open court and ordered to be recorded.             Test. Wm Johnson, clk
Recorded the 22nd  October 1792
Nathan Falkner and his wife, Sarah were witnesses to the Will of Benjamin Falkner. Nathan does appear in several early deeds, documents and census records of Anson County.
1790 was the year of the first census of the United States of America.
Elizabeth Falkner appears as the Head of her Household in this census. There's is a household of 4, two females, one of which would have been Elizabeth, and her two sons, John and Henry, both under 16, meaning they were born between 1774 and 1790. As both were living when their father wrote his will in 1783, we can narrow those years down to between 1774 and 1783. This John was still not my John, as he was not yet born.
Other Falkners in Anson County in this census were Archibald, Nathan, Asa, and Francis, twice.
There are several questions to be answered in this will. First, where did Benjamin come from? What was his relationship to Nathan Falkner? What happened to his widow, Elizabeth and his two sons, Henry and John? And where was the property he mentioned, a Plantaion named Silk's Prospect and the Bridge, 'Free Bridge'? I don't believe they were in Anson County. 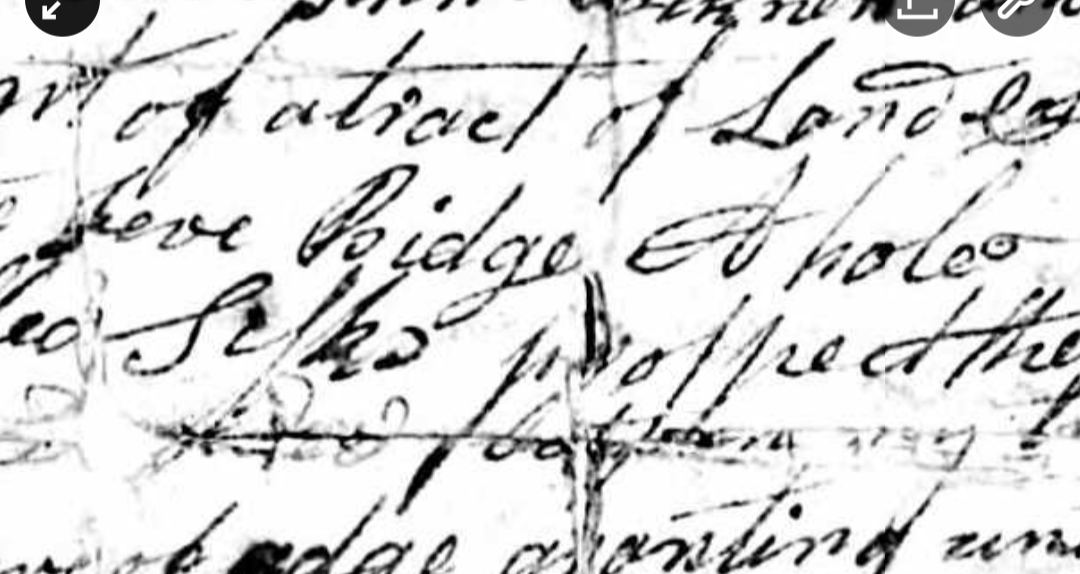 A closer look at the difficuly handwriting might give a different interpretation.
There's an historic home in Edgecomb County, NC called 'Piney Prospect', located near Tarboro. I believe the lands of Benjamin Falkner may have been located back east and his family may have returned there. Elizabeth was probably still a young woman and her boys were possibly around 8 and 10 in 1790, so it's very possible she remarried, either in Anson County, or back where they had removed from.
There is a site online called, The Faulkner's of Sandy Creek at fauknerfamilies.com, compiled by John L. Faulkner of Greer, South Carolina. He lists 10,548 members of an extended Faulkner family tree on his site, and has obviously done a tremendous amount of research.
Sandy Creek, where members of the Anson County Falkner Family lived after migrating to North Carolina from Maryland, is in Vance County, NC. Before Vance was formed, during the time the Anson Falkners lived there, was in Warren and Franklin Counties.
Digging into Vance County, I come across names, one in particular, that I haven't encountered since my research of my Winfield family and their connections to the Booth and Jones's, Vinkler Jones.

According to The Falkner's of Sandy Creek, Benjamin Falkner was born in Queen's Anne County, Maryland about 1754. Between there and the AGBI, he was the son of Thomas Falkner (or Fortner) and Elizabeth Hunt.
Thomas, born about 1710, was the son of John Falkner (1678-1727) and Sarah Ford (1680-1731).
Vinkler Jones had bought the Burnside Plantation in current Vance County from Charles Kennon on May 2, 1780. His son, John Jones, built the current house about 1800. On November 10, 1818, John sold the house to a Dr. Thomas Hunt, along with 2500 acres. Several records have Elizabeth, the wife of Benjamin Faulkner as having been born as Elizabeth Hunt.
Current Faulkner/ Forkner / Fortner family research and compilations have Nathan and Benjamin Faulkner as first cousins. They are in the family group who had migrated from Queen's Anne County, Maryland to Warren, Franklin and Vance Counties in North Carolina, then a branch went to Cumberland and later Anson while Nathan and possibly a few others seem to have came straight from Warren/Butte County to Anson. Nathan is found in Butte in 1771 and Anson in 1777.
The connection between Nathan Faulkner and Benjamin Faulkner is given as one of the proofs that the Anson County Faulkners were part of the Queens Anne County Maryland group.
Possibly going backwards and going forward, will help answer some of these questions in the Faulkner family mysteries, especially, where did the family of Benjamin go after 1800?
Posted by Jobs Children at 3:05 AM