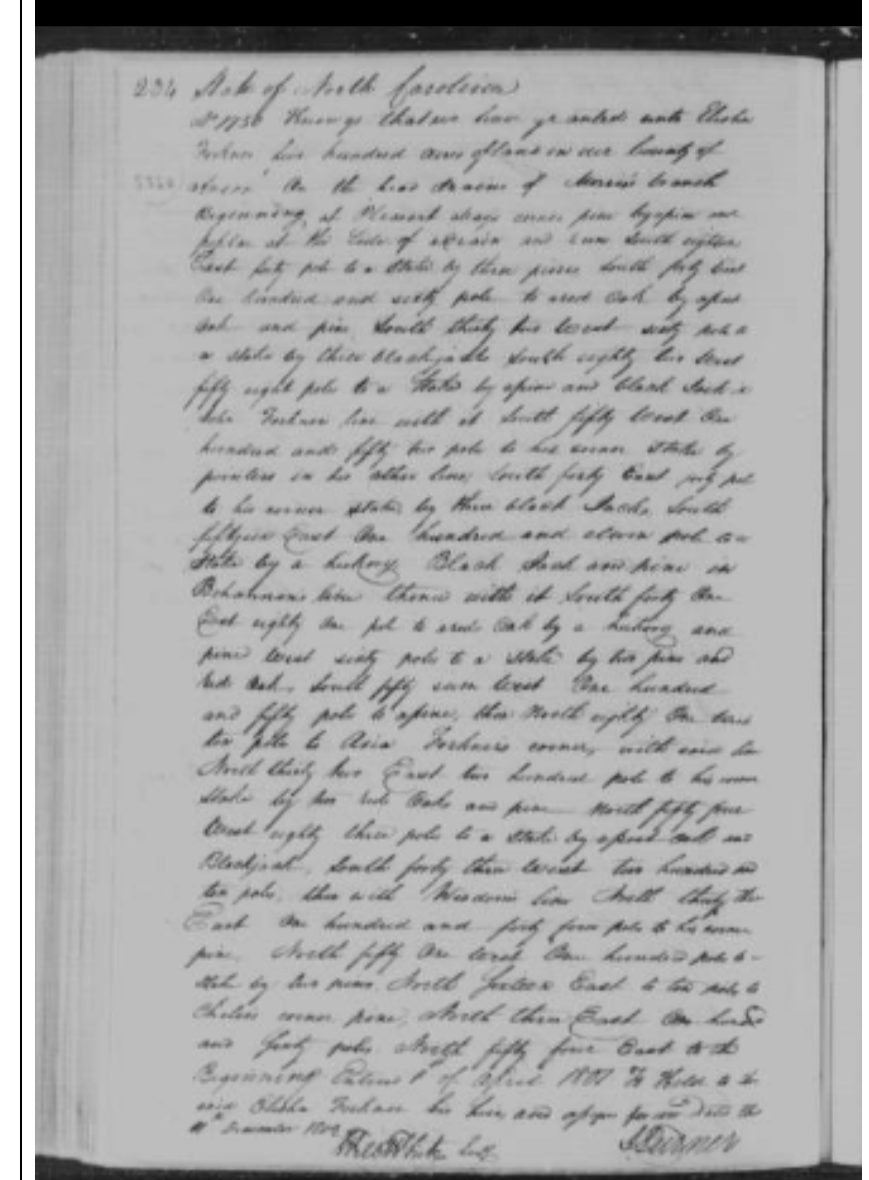 Allow me to begin this post with a land grant. As the olde scripte is difficult to read, let me transcribe the names and location parts, leaving out the chains and pines and blackjacks.
Book 110 pages 234-235 File 5560 Number 1750 - State of North Carolina. "Know that we have granted unto Elisha Forkner (sp) five hundred acres of land in our county of Anson on the head drains of Morris's Branch beginning at Pleasant Mays corner pine....by a pine and poplar... to a stake by a pine and black jack in John Forkners line ......pine in Bohannons line ten poles to Asa Forkners corner with Wisdoms line....Chiles corner pine  April 1802... To the said Elisha Faulkner his heirs and assigns. 11 December 1802.
There are 4 places that keep coming up in deeds involving the early Faulkners in Anson County; Jones Creek, Morris's Branch, Wilkey's Mill Creek and a branch off of Jones Creek called Featherbed Branch. There are a number of surnames of neighboring land owners that also keep popping up, Mays, Jarden or Garden, Buchanon or Bohannon, Wisdom and Chiles or Childs. Likewise, as several of these surnames had various forms as they were often spelled phonectically, Faulkner can be seen as Forkner or even Fortner. 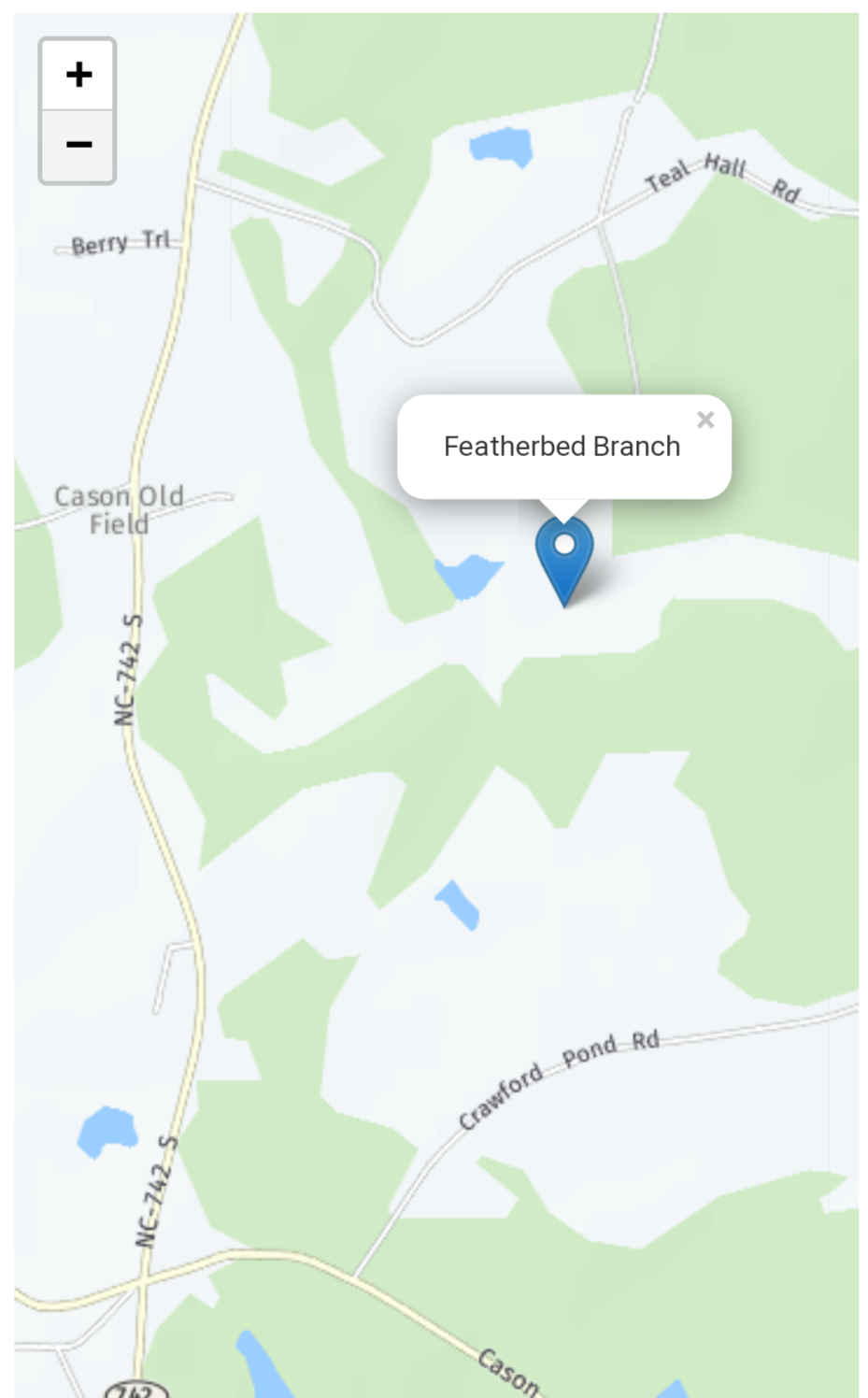 And I am going to follow that up with more information on Elisha or Elijah Faulkner found in land deeds. 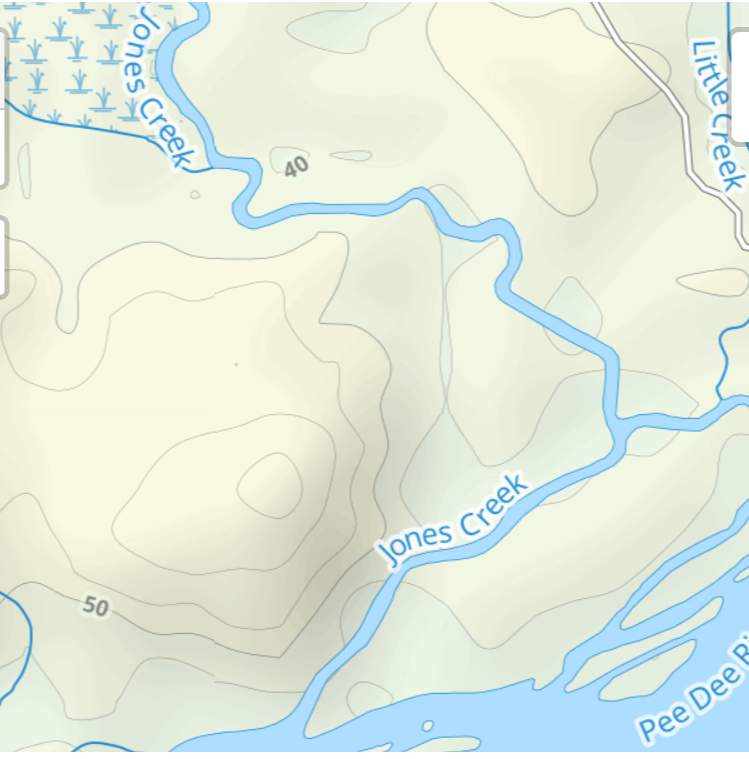 Dec. 15,1798 David Collins of Anson County to Elijah Falkner of the same sold 2 tracts of 200 acres, the border beginning at a hickory on the east side of Lowery's Branch near the mouth of Dry Prong. It crossed the 'dreans' or drains of Lowery's branch, crossed the branch and that was the first tract. The second tract was one of 100 acres that began at a stake on the line of David Collins new survey. It joined Ready Branch, crossed Lowery's branch and the fourth line of Collins new survey. The witnesses were Job Falkner, Merit Meek and Jonathan Falkner. Job Falkner gave oath in Oct, 1805 Book L Page 8.

Dec 2, 1800 Nathan Falkner to Jonathan and Warren Falkner, all of Anson County for 160 Spanish milled dollars, sold all my stock and cattle and hogs, 3 featherbeds & furniture, all my other household furniture & my crib of corn. Signed Nathan Falkner, witnesses Noah and William Rushing. Acknowledged in 1802, Book H2 Page 50. Note: Nathan only appears in the 1790 and 1800 census of Anson County. This sounds like a man on the move who is selling everything he can't take with him to members of his family. Also mentions a Warren Falkner, who never appears in a census. 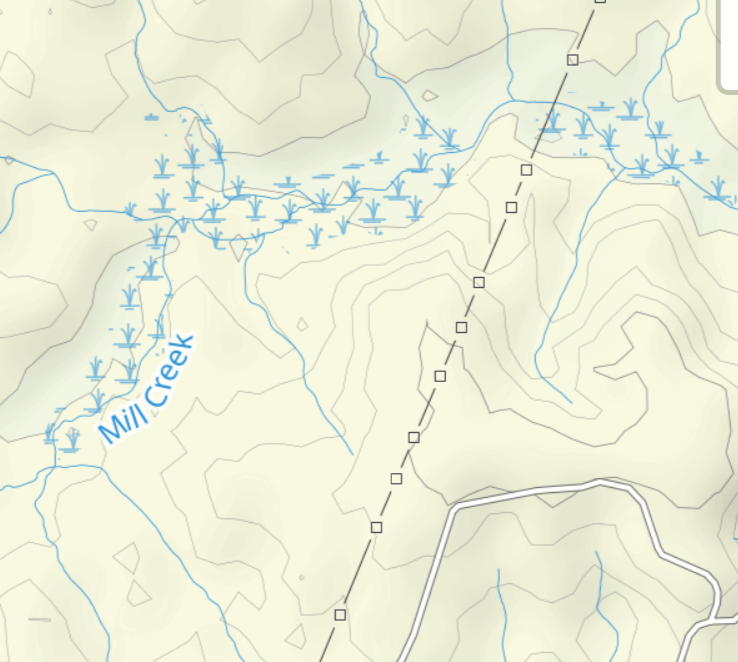 Nathan Falkner was the oldest Falkner found in the 1800 census of Anson County. In 1790, there was an older Falkner with him, Francis, and in 1800, the Francis is a young man. 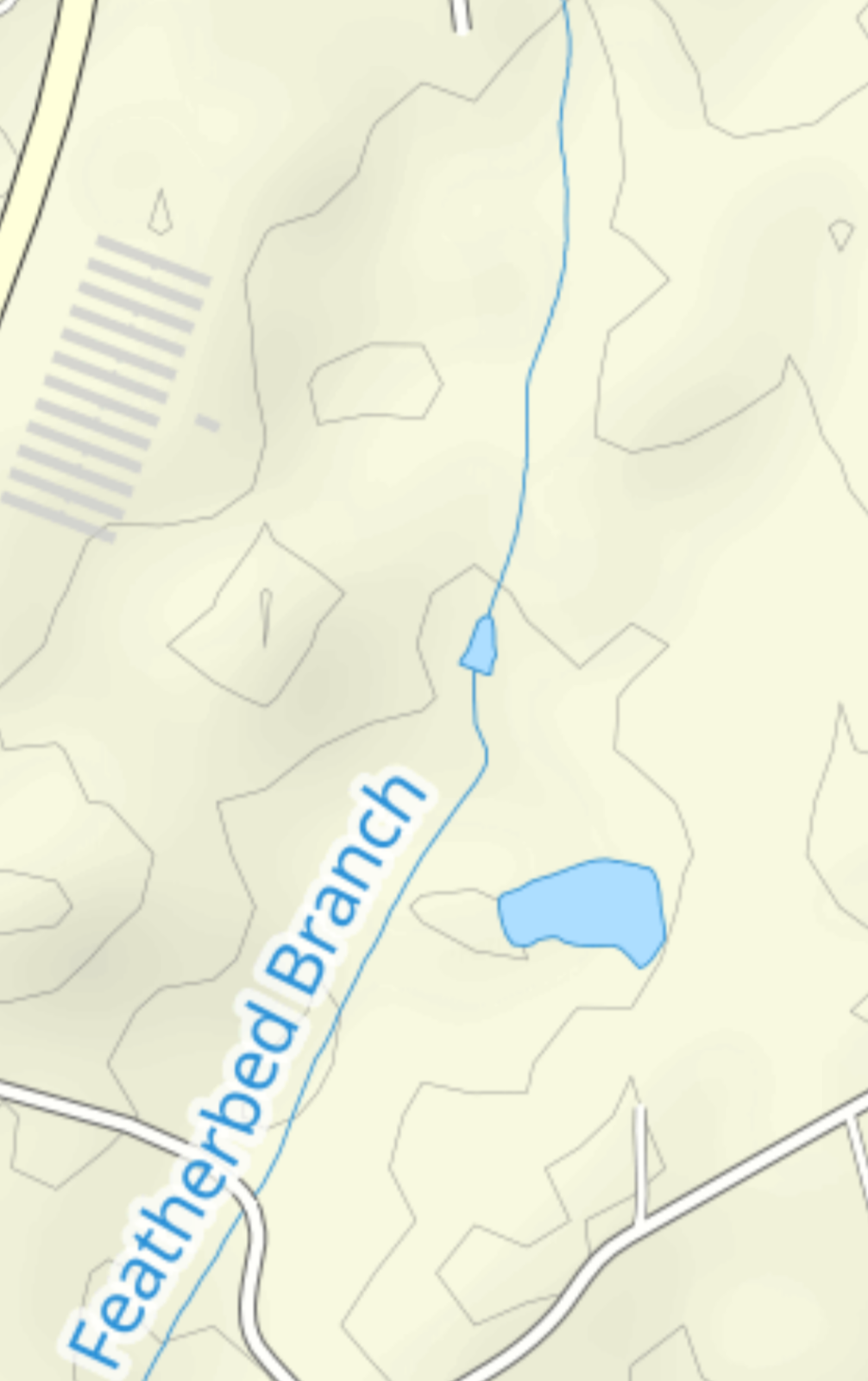 ie: Here I must interject that Elijah and Elisha were obviously interchangable. There was a grant to Elijah/Elisah Falkner. The property adjoined that of older John Falkner, which probably meant a familial connection. The names of Pleasant May and the Buchanons would become very significant. Also, Job Falkner, mentioned in both deeds, gave oath to both the 1798 deed and the 1803 deed both in October of 1805.

October 31, 1808 Asa Falkner of Anson County to John Buchanon of the same for $500, 500 acres on Featherbed Branch, beggining at a hickory in Malachi Watts line, near a drain of Featherbed Branch. Joins Wisdom, Chiles, Teak, John Falkner, Buchanon and Robert Jarmon, except .5 acres where the Meeting House stands, includes where said Falkner lives. Signed by Asa Falkner and witnessed by Richard C. Pattisall and M. Johnson. Oath on July of 1814 by Richard Pattisall. Note: This is the first mention of Asa. Again, the mention of the Buchanon property and that it borders John Falkner and Wisdom and Chiles, the same names mentioned in the Elijah Falkner transaction. 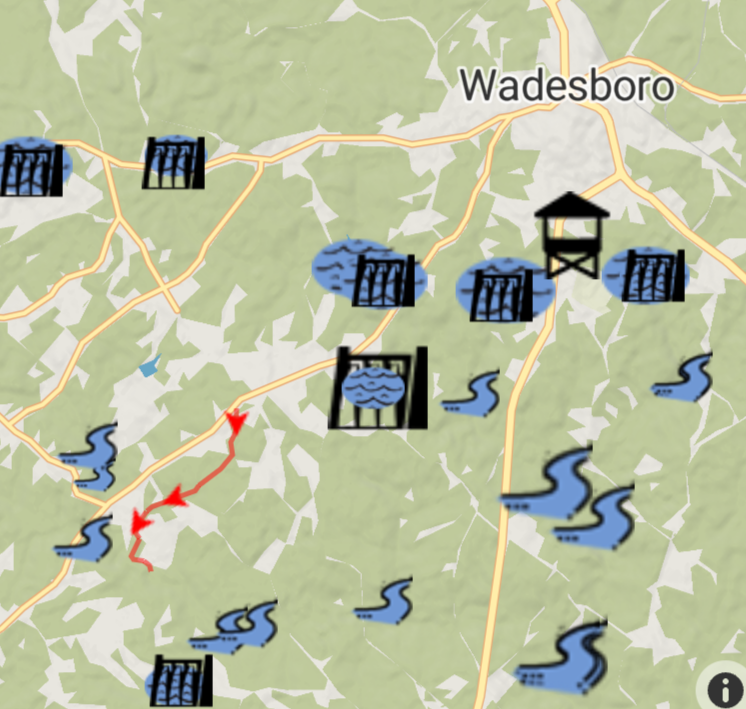 Featherbed Branch. The one grant early John Faulkner recieved was on Featherbed Branch and adjoined the property of Benjamin Buchanon. Now it shows Asa Falkner on Featherbed Branch.
The names of Jarmen or German, Bohannon or Buchanon, Wisdom, Chiles or Childs repeat themselves in many a deed or grant that belonged to the early Falkner/Faulkner/Forkner/Fortner family of Anson County.
John doesn't appear in the 1820 census, and I wondered if some of his neighbors did but we'll look at that in a moment. He was there, I'm pretty sure and it's because of the below record.
Dec 23, 1831 Henry Buchanan to Daniel McRae, both of Anson, on Featherbed Branch, beginning at a Hickory in Malachi Watts line near a drain of Featherbed Branch, joins Wisdom, Childs, Teal, John Falkner, Buchanon & Robert German. includes the land bought of Richard Buchanon except the 0.5 Acres where the meeting house stands. Book Y Page 92. Note; this is the same description of land Asa Falkner sold to John Buchanon and land is still in John Falkners name.
I believe this was the older John, as my John doesn't appear until the 1840 census. However, he would have been an adult by 1831, so let's look at it a little closer.  The year is only one year after the 1830 census and mentions Wisdom, Childs, Teal, John Falkner and Robert German. Keep in mind that sometimes German is seen as Jarman or Jerman, sometimes Childs is seen as Chilles and sometimes Buchanon is seen as Bohannon, as in the many incantations of Falkner. Getting a first name in is crucial too. German/Jerman is Robert. Teak or Teal, I haven't nailed down the first name, as there were several Teal's in the area. There were multiple Buchanons, John, Henry, and Benjamin. The Wisdoms were father and son, William and Francis. I wanted to check their properties to see if there were any mentions of the Falkners 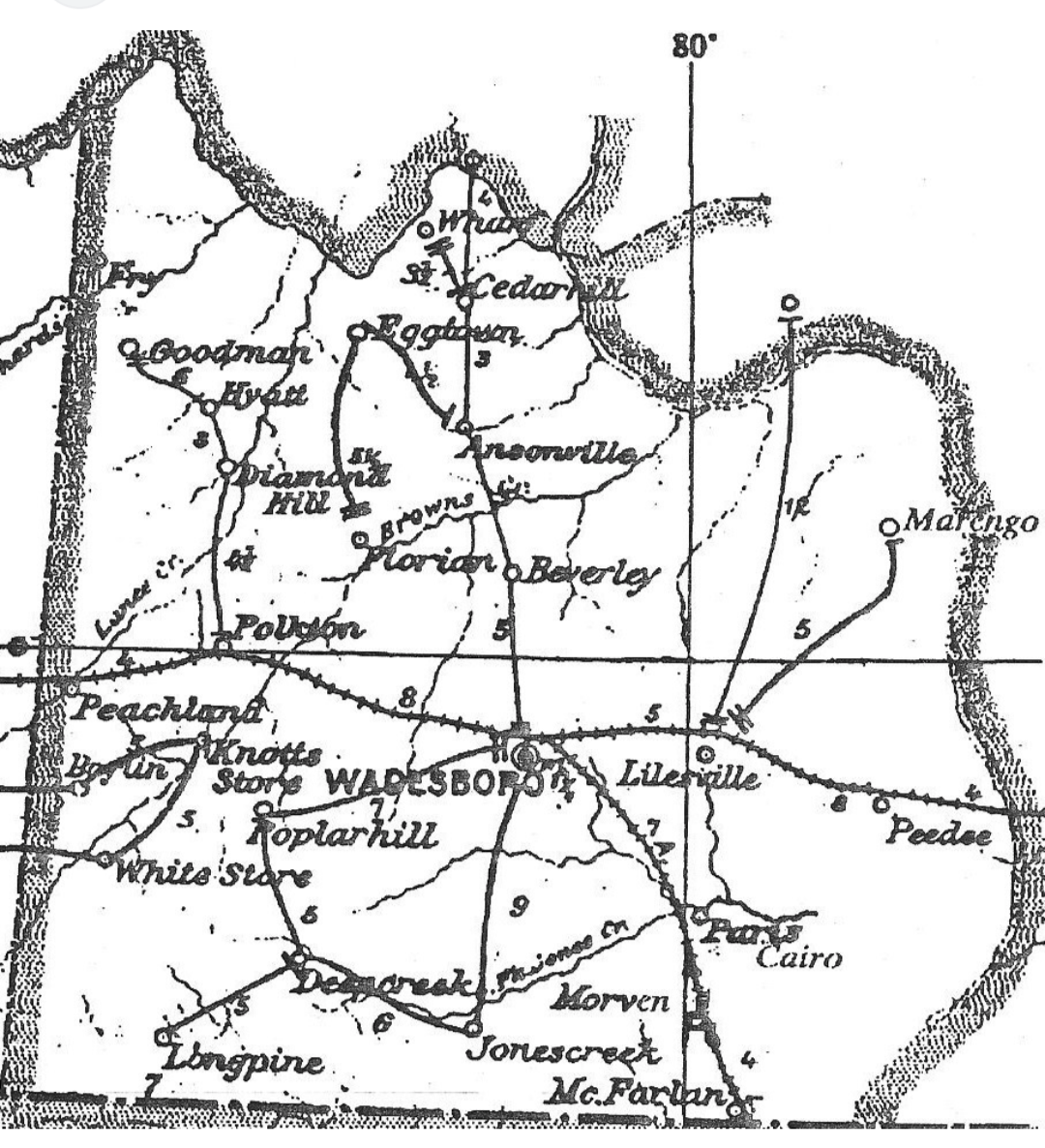 Starting with the Wisdoms, in March of 1799, Francis Wisdom received a grant of 100 acres on the waters of Jones Creek.
1805, Thomas Wisdom, another son of William, recieved a grant of 150 acres at Turners corner and joined the properties of John Childs and John Parrett. So we have a given name to the Childs neighbor and the corner was probably that of a John Turner.
Moving backwards, William, the Wisdom patriarch, had recieved 100 acres in 1787 that bordered Malachi Watts on the McDaniels Branch and on the waters of Jones Creek. The next grant interested me most. In 1798, William Wisdom recieved a 100 acres grant that began at a pine in his own land, ran 14 chains east to Asa Falkkners corner hickory.
There are early grants for John, James and Thomas Chiles or Childs. John has two grants, one at the Grassy Island Ford and another 'including the Island fish traps and ferry place". No mention of Jones Creek, Featherbed Branch, or any of the other names.
The Teals who may have been the ones mentioned are a Benjamin Teal, Jr., who owned land on Jones and Mill Creek in 1878 and an Emmanuel "Tull", who in 1802 lived on Jones Creek.
Robert Jarman was all over the place, but in 1784, he had recieved a grant of 200 acres on the southside of Jones Creek and Lewis Lowery's great branch. I've seen Lowry's branch mentioned in the records of Nathan Falkner. In 1790, he recieved a grant of 100 acres on the Dry Branch on the southside of Jones Creek. Robert was obviously wealthy as he attained a total of  20 grants. Decades later, there was a John S. Jarman, probably a descendant, who had two grants on Jones Creek, one of which bordered a Samuel Teal.
The Buchanan's, whom I thought would show up alot, did not. The Mays were the family that governed Mills and Jones Creek. They were all over it and had several mentions of Lewis Lowery and his branch in their records.
1820
In 1820, no Falkners were to be found in the 1820 census, but I know the families of Asa Jr. and even of a John were there, at least.
There were a number of Buchanons, but as this was the census that they listed the names of the Heads of Household in alphabetical order, we can't see the names of neighbors. They did list the names by township, however, or region. John and William were in the area called "Mays", no doubt named for the May family.
Richard, Henry and May Buchanon lived in Ratliff.
There were no Childs, or Chilles, although they were obviously there, too. There were no Wisdoms.
There were three Jarmans, John, William and Willie, and they all lived in Culpepper. No Robert listed. Had he died?
1830
Ten years later there are still 3 Jarmans, William, Willis (probably the same individual as Willie) and Jesse.
The only Buchanon remaining was May Buchanon, and he must have owned an enormous plantation,as he had a large number of slaves in his household.
There were no Wisdoms, they appear to have migrated away, leaving land in their name remaining.
There was one Chiles, James and one Falkner, Asa, and none of them lived near each other. Asa was also better off than most, as he owned 8 slaves.
It was who did live near Asa Falkner that interested me. First there was Robert Huntley, father of Elizabeth Huntley Falkner Jones, who had been the young widow of Asa Falkner Sr. and Abner Boggan, who had a close association with the family of John and Susan Webster Falkner, my Third Great Grandparents.
My aim is to dig deeper in the bowels of these five aligned families and attempt to discover the general area where at one time their property lines met. This in hopes I might be able to connect the dots to the various Falkners and where John would fit in, because I know, he fit in somewhere.
Posted by Jobs Children at 9:09 AM