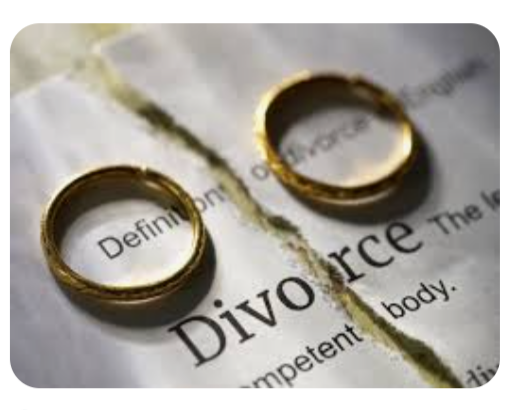 I recently posted about my Second Great Grandmother's younger sister, Ella Elizabeth Faulkner (1871 - 1935), in a post called "The Black Widow". You can read about it Here:

Aunt Ella was married five times, but in all fairness, she was only widowed twice.

She married first on December 23, 1886, to James Stevenson Turner, son of George Washington Turner and Elizabeth Wincy Morton Turner. He was the brother of her sister, my second Great Grandmother, Sarah Frances Faulkner's husband, William Alexander Turner. Two sisters married two brothers. It was not an uncommon occurance in those days.

Ella was very young at this time, no more than 15 or 16. Her age was very fluid over the years. Her death certificate gives her a year of birth as 1875, but I believe she had whittled away at that over the years and her daughter had no real idea of her actual age. If this was true, she would have been only 11 when she married the first time, which I don't believe was accurate. She and Jim had one son, George Washington Turner III, born in 1894. There were others, but they remain unnamed and didn't survive childhood.

Jim died of pneumonia, the very next year after his son's birth, in February of 1895. 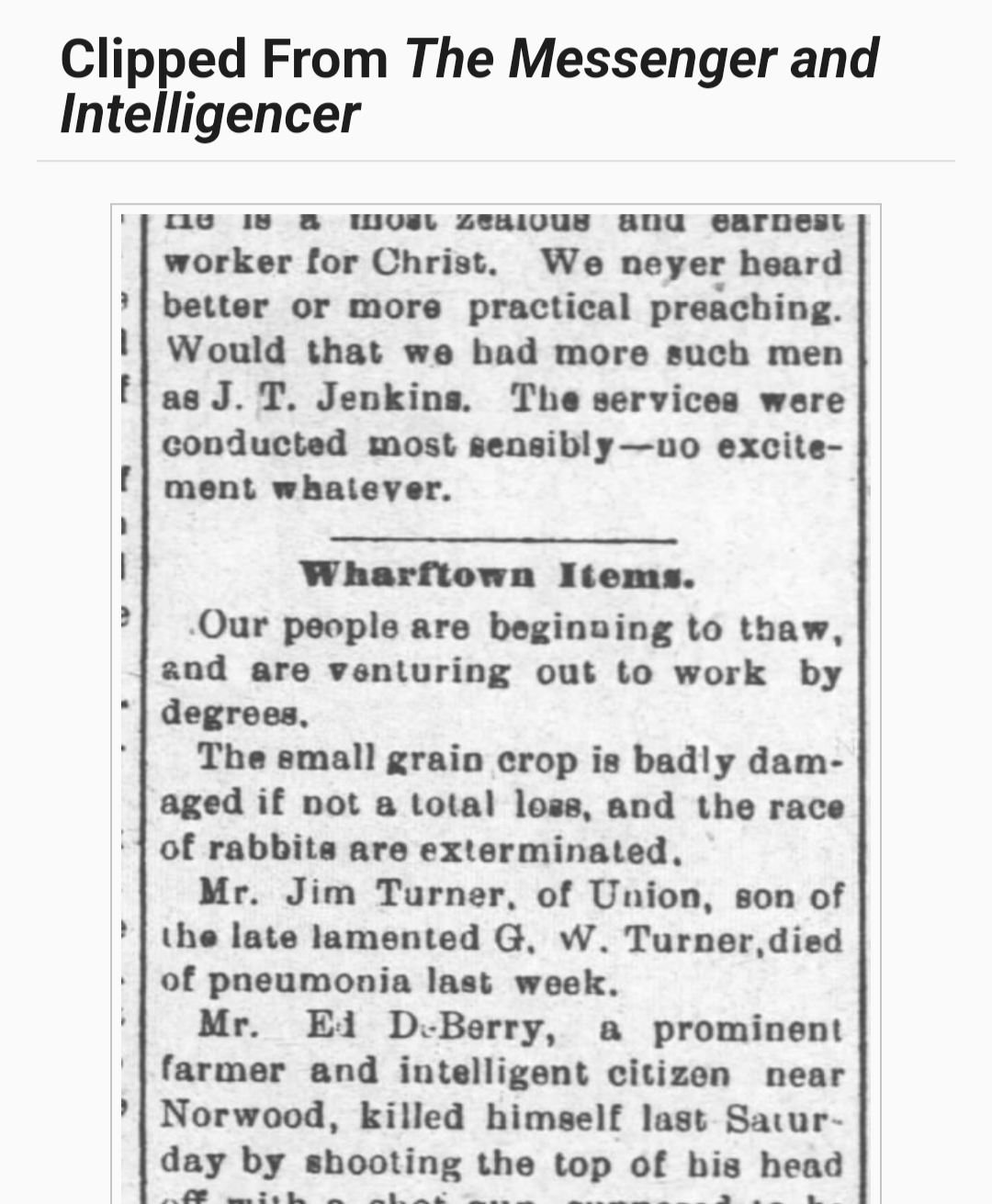 Ella sent her son to live with his uncle, Robert Turner. She remarried on November 15, 1897, to Charlie May Smith. I must make mention of the fact, that he name "May" in the name of a man in Anson County, NC, had nothing to do with the month of May, as in a woman's name, but rather, referred to the surname May, which was the name of  a prominent Anson County family. May Buchanon was another man in the area who carried the name, son of Benjamin Buchanon and Judith May.

I had came across the May family, as well as the Buchanons, consistently, while researching my Faulkner family roots.

So, Charlie May Smith was husband number two. This marriage produced a daughter, Virginia May, born in 1899. On January 8, 1900, while in the town of Wadesboro to visit a few of his siblings, Charlie Smith was robbed and murdered while waiting on a train. His daughter was 5 months old.

So now, Ella had been widowed twice, probably before, or near to, her 20th birthday. She moved from Anson County, to the town of Albemarle, in Stanly County, and moved in with her sister, Fannie and double brother-in-law, Will Turner. She's living there with her baby daughter in the 1900 census.

On August 5, 1900, nine months after the murder of Charlie, she married a third time to William Thomas Russell. W. T. Russell was from Montgomery County, NC and had moved to Stanly County, where he had married his first wife, Nancy Austin, and had three sons. His first wife had also passed away in 1900.

This marriage dissolved not by death, but by divorce. W. T. divorced Ella on July 2, 1903. It hadn't lasted long.

Not a quitter, Ella tried her hand at marriage a fouth time. This time, she chose a much younger man, instead of an older one. Thomas C. Russell Deas was from York County, South Carolina and was born in 1885, the year before Ella's first marriage. The couple were married on October 8, 1905, in Mecklenburg County, NC. Ella had moved to the big city. 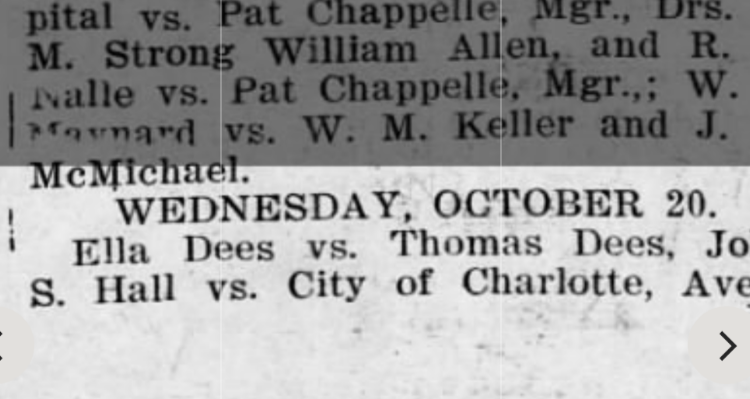 This marriage lasted about 4 years, and on September 24, 1909, Ella divorce him, instead of the other way around.

Lastly, Aunt Ella married for a fifth and final time to James Edward Dull, on September 25, 1915. This was about 6 years after her last divorce, and Ella was still in her 30's, somewhere between 35 and 39. She would have no more children, however.

Ella had taken up operating a boarding house in Charlotte, which was one way a woman could create a respectable living. James Dull had been one of her boarders. He was the son of James Bristo and Nannie Hunt Dull.  James was from Staunton Virginia and Ella was his second wife. He was again, a younger man, having been born in 1883. This marriage would last twenty years, until Ella's death in 1935. J. E. Dull would remain in Charlotte and outlive her by 22 years, passing on in 1957. 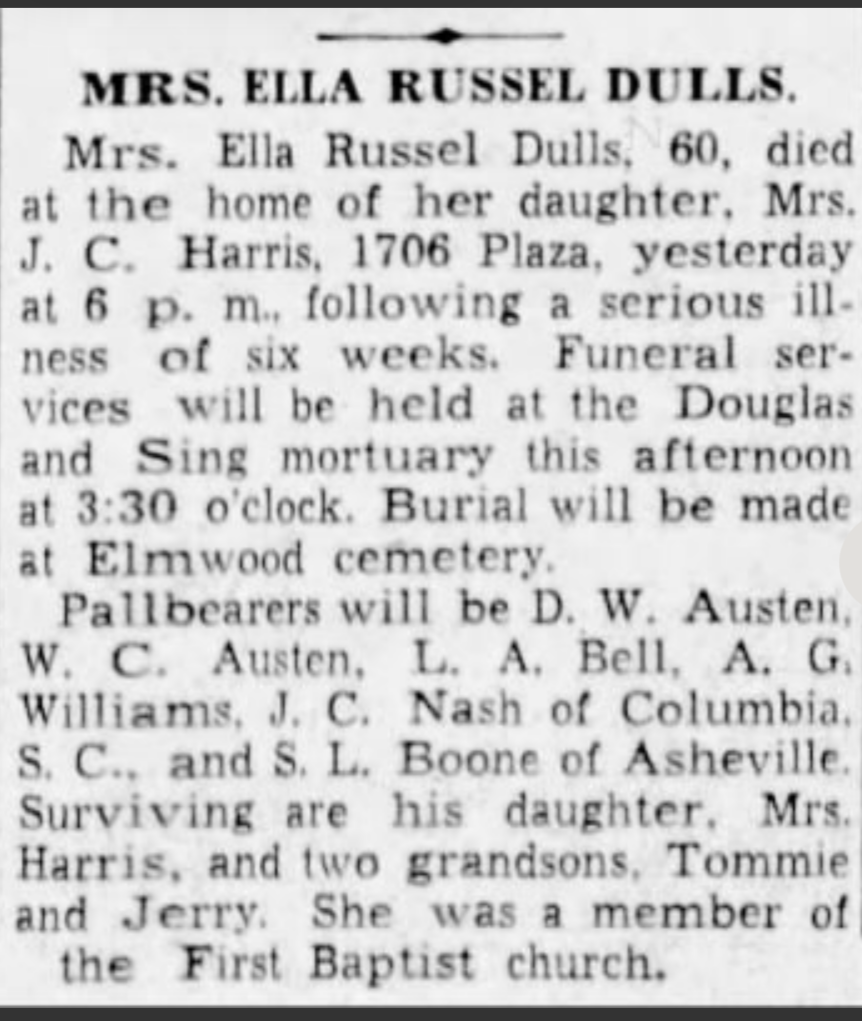 Although I knew of Ella's divorces, I never knew the details, having to wait on documents from the state archives to arrive. Now they have and this post is to address the interesting details of her two divorces.

The first was the case of  W. T. Russell vs Ella Russell, held in the Superior Court of Stanly County, North Carolina.

" I  The plaintiff above named complaint of the defendant and alleges  tha on the5 day of August 1900 in said County and State and in the town of Albemarle, the plaintiff and the defendant intermarried and ever since have been and now are husband and wife.

II That the Plaintiff is and has been a resident of the state of North Carolina for more than 2 years immediately and next of this action.

III That on the 29" day of October, 1901, the defendant willfully and without just cause voluntarily abandoned the plaintiff and has ever since lived separate and apart from him that after the marriage aforesaid while plainfitt and defendant were living together as man and wife. They took to board with them a man by the name of Cliffton James, who was a married man, but his wife was not living with him during  said period, as plaintiff is informed and believes the said James and the plaintiffs wife became too intimate and she was completely alienaated from plaintiff and refused to live with plaintiff as wife, and from their conduct towards each other during plaintiffs absence, as his business frequently called him away from home, the plaintiff has every reason to believe and doe believe that during said period of boarding the defendant committed adultery with the said James that upon plff. best information and belief, the defendant committed adultery with the said James diverse times doing said period.

IV That as plaintiff is informed and believes the defendant and the said James left his home about the same time and went to the town of Concord and lived in the same house on Factory Hill of the Gibson Mill, the house being kept by Robert Lowder and during said period, between the months of November, 1902 and March of 1903 she committed adultery diverse times with the said James. That each and all  the said acts of adultery without the counsel, connivance or procuement, or privity of the plaintiff and tha plaintiff had not cohabitated  with the defendant since the discovery by him of the commission of the said acts of adultery complained of.

So, basically, the honeymoon was over very quickly on this one. Within the first two years of the marriage, W. T. and Ella took in a boarder named Cliffton James, who was estranged from his own wife. While W. T. was out working, as a Carpenter, according to his professions given in the 1900 census, Ella and this Mr. James began an affair. Ella then left her husband and home in Albemarle and moved with Cliffton James to the Gibson Mill Village in Concord, NC.

I know nothing about Cliffton James, where he came from, or where he went. Ella ended up moving to Charlotte, NC, at least by 1905, when she remarried to Russell Deas.

This marriage went sour quickly, as well, but not on the side of Ella, but also, in a very bizarre manner, especially for the time frame in which they lived.

The Plaintiff Complains and alleges

(2) That she and defendant lived together as man and wife until about the 10th day of March 1909 when he abandoned plaintiff without cause and has since lived separate and apart from her.

(3) That during the month of February 1909 while she and defendant lived together at 310 South College Street in the City of Charlotte defendant with violence and threats, forced the plaintiff to leave her bedroom, that he then took a heavily veiled negro woman into said bedroom where they both undressed and went to bed together and committed adultery with her.

(4) That in the month of March thereafter the defendant abandoned the plaintiff as aforesaid and as he is informed and believes is now living in fornication and adultery with a woman whose name is not known to plaintiff, in the town of Monroe, NC.

Wherefore plaintiff prays for a Judgement of absolute divorce from the defendant and for such other and further relief as she may be entitled to and for Costs.

Russell Deas could not be found and the requested divorce was granted in October of 1909. True, or not, this case was a little wild and 'polyamorous' for 1909, and I am sure was grounds for tremendous gossip. Thomas R. Deas was found living in Marshville, Union County, in 1910. 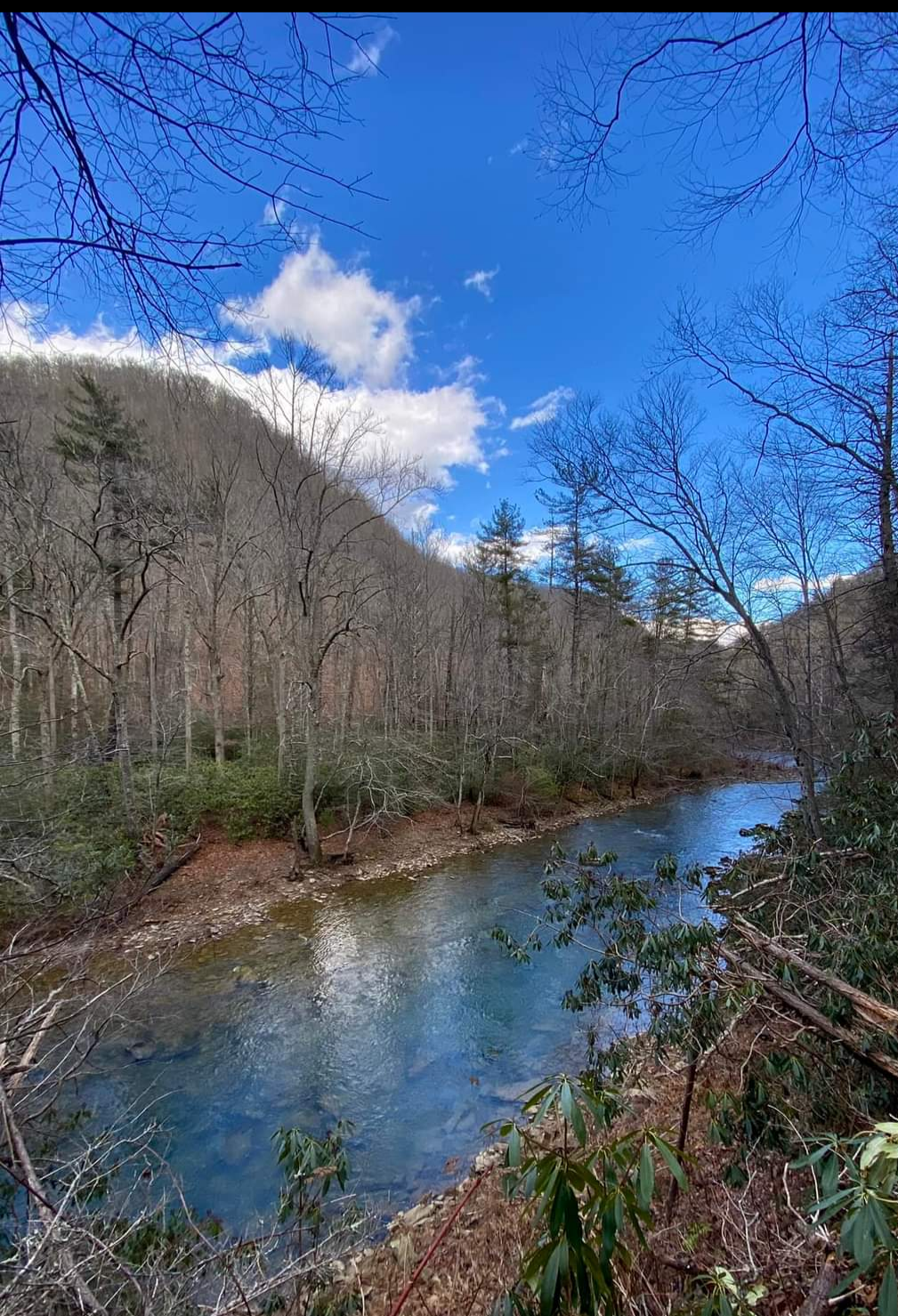