The Memories of an Old Man: James Thomas Shepherd


The story of James Thomas Shepherd began with the above marriage record. On Christmas Eve in the dark days of Reconstruction in the Sandhills of Richmond County, North Carolina, William Edmund Deberry Shepherd (sometimes seen as Edwin or Edward, the names seemed interchangeable), son of William Wilson and Emaline Shepherd; married Francis "Fanny" C. Carter, daughter of Marcus Princeton and Nancy Marks Carter. Marriages normally took place in the brides county of residence, but not this one.

James Thomas Shepherd, known as Tom, would be the firstborn.

In a nutshell, the following is the family tree of William Edmund Deberry Shepherd, a Civil War vet, as was his father Wilson.

In the old Stanly News and Press, a column was featured called "Fred Morgan's Musings".  Mr. Morgan often touched on local history and characters in that history, in his columns. In a latter issue in 1900, his subject was concerning a now defunct Post Office in a long abandoned community called "Rest".

This portion of a 1940 map of Stanly County shows the general area of Rest. It is said to have been located near the modern day area called "River Haven", south of Morrow Mountain and close to the Swift Island bridge.

According to Mr. Morgan, a post office for Rest was set up about 1890 in the home of Mr. Eli A. Forrest, a crippled man. Mr. Forrest, had with difficulty, tried to farm land in the rolling hills of the area that he had inherited from William Forrest, his father. As many families did in the hard times, Mr. Forrest sent his children to work in the growing cotton mills of the times, once they were old enough, to support the family. They moved to Concord in Cabarrus County for this purpose and left Rest without a post office.

After Mr. Forrest, Rest had a chain of postmasters and locations:

Next came the home of Dick Harris, who moved to Spencer for railroad work. The ball was then passed to John Frank Lilly. Mr. Lilly lived on the north side of Mountain Creek, while most of his patrons lived on the south side. Any rise in the water of the creek made it difficult to cross for the patrons to get their mail, so again they wanted a different location for the post office.

This link to a 1916 soil survey map shows a school called "Forrest School" near a crossroads which may have been the two roads they referred to near the Swift Island Ferry.

After Mrs. Hinson gave up the position of Postmistress, the job was taken over by a Mrs. Louise Underwood. The article concludes " Mr. James Thomas Shepherd was appointed to suceed her. He served as postmaster until  the establishment of Albemarle R. F. D.  number 1, which from then on until the present day has supplied mail services for the community. "

James Thomas Shepherd is buried at Anderson Grove Church cemetery, along with his wife and a son. Land records show interactions with W. W. Kearns, his uncle by marriage, of his portion of an inheritance of land from his grandfather, Marcus P. Carter. The Marcus P. Carter cemetery is located south of Hwy 24/ 27 between Indian Mound Road and McNeil Road. Marcus P. Carter purchased the land from Parham Kirk, administrator of the estate of Henry Harrison Melton (I). Henry Melton and Marcus Carter were good friends and neighbors, as proven in Henry's letters to him during the War between the states. It was in this area of the county that the Melton's all dwelled. 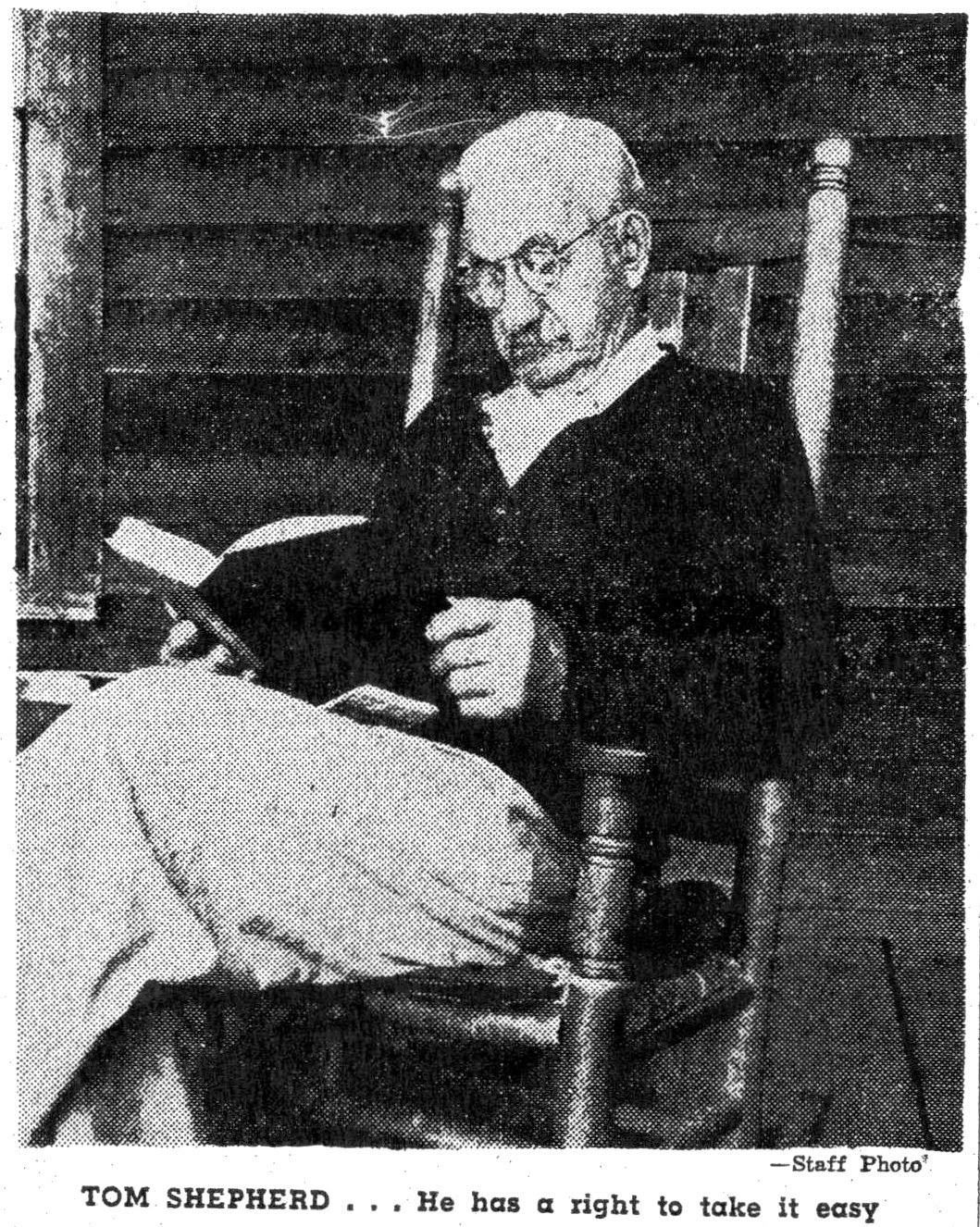 This picture, from an article in the Stanly News and Press  about 1954, shows Tom Shepherd looking much more like a Postmaster than a farmer. A distinguished looking fellow, donned in slacks and sweater, sitting in a rocking chair reading a book, on the porch of an old house that looks like it may have matched the Kron house in archetecture, is a back drop. The article explains Tom's early years, as well as his notice of the change of time.

The article states that Tom was living in the Stony Mountain section of the eastern side of the county and that he did not go to school until he was over 15 years old, and then he only attended the Ingram school for 3 winters. The article then proceeds, " Tom was born on that day in the year 1869 on a farm in the upper edge of Richmond county in the vicinity of Little River. His father was Edmund Deberry Shepherd and his mother was the former Fanny Carter of Stanly County. When he was 4 years old, his mother died and his father remarried in Richmond County. Tom came to Stanly County to live with his mother's people. His grandparents, Mr. and Mrs. Marcus Princeton Carter reared him until Mr. Carter died in 1880. For the next 11 years, Tom was a hireling among the public."


The 1870 census shows a year old Tom with his parents in Mineral Springs, Richmond County. His mother and infant brother were buried in Stanly County with his grandparents.

The 1880 census shows Tom and his sister Lundy Cornelia or "Nealie" in the home of his grandparents, along with their aunt Lucy Jane, who married W. W. Kearns.

The article continues: "For an 11 year old thrown out for hire among the money-shy public of 1880, it was a tough life to live. Farming was the only thing of  any economic importance going on in the county, and it was farming Tom did from then on. .........Some of the farmers he worked for during that time were John Underwood, Fannie Howell widow of Kearn Howell, Tom Laton, Whit Marks, A. J. Russell and Sid Smith. In 1891, the year he married, he said he was only being paid about $9.00 a month".

Tom married Lucy Rosa Morton and by 1900, they had had 4 children, Beulah, Virgil, Alice and William E. Virgil is the son buried at Anderson Grove with them.

In the article he states: "He was married to the former Rosa Morton, daughter of the late Mr. and Mrs. J. A. Morton (John Allen Morton and Dovie Caroline Biles Morton). She was 17 at the time, he was 22. Her parents objected to the union and her father had forbidden the register of deeds to issue a marriage license to Tom. Through a friend in Mt. Gilead, Tom had sent the necessary information by mail to Troy, the county seat of Montgomery County and secured a marriage license from that county.

"Cost me three dollars, " Tom said with a chuckle, "I don't know what they cost now."

On the day of the marriage, June 14, 1891, Tom got his bride-to-be and took her down to the old Swift Island Ferry, where the minister, Alec Whitlock, and a crowd of other folks were waiting. Everybody boarded the flat and it started across the Pee Dee River. A little over half way across, Mr. Whitlock told the ferryman that we were in Montgomery County and  asked him to stop the flat. Tom said, "So the flat stopped there, less than two-thirds of the way across the river and we were married right there on the flat."

"To this union 11 children were born".

The 11 children of Tom and Rosa (sometimes seen as Rosina or Rosana) were:

All of his children reached adulthood and he married off all of his daughters. At the time of the article, Tom estimated his grandchildren at 35 to 40. I suppose he had lost count.

In the early days of the marriage, Tom continue to work as a laborer on other people's farms. At one point, he borrowed the money from his employer, Tom Laton, and bought the farm on which he raise his children and still lived. The old Laton cemetery in on a hill adjacent to the Marcus Carter cemetery, across the highway. All of the old cemeteries in the area, including the two Solomon cemeteries, have stones adorned with ferns and scrolls and other artistry. Being so near to one another, perhaps the same artist decorated these, or either it was a trend on the east end of the county.

Tom Laton had offered to send Tom Shepherd to college along with his son, who became a doctor. It was an opportunity Tom knew he should have taken, but he was concerned with an unpayable debt, and had continued to farm.

In the article he recalled the early days of farmers using oxen to pull plows and the first bicycle he ever saw. "It was ridden by Lawrence Fesperman of Wadesboro.....and it created a sensation among the folks at church." The church mentioned was Anderson Grove.

He recalled keeping that fourth-class post office in his home, with mail being delivered twice weekly, and at 85, Tom Shepherd was still walking the mile from his home to the mailbox by the road. His home sat that far back from the street. Although Tom had lived through the great depression, he recalled the most difficult era in his lifetime as being from 1892-1896, when Grover Cleveland was in office.

"Men were walking the roads and streets begging for work to do in return for food." This was also the era of the last great migration out of Stanly County and surrounding areas to Arkansas and Texas, or people congregating to the towns where mills and factories were being established.

Tom ended his interview by revealing his love of reading, radio, hunting and fishing. He had no use for television and watched only one movie in his lifetime.

Like his sister Nealie, whom I've posted on recently, Tom, the young boy who fought to survive in the difficult era of the end of the 19th century, succeeded in making his way in the world. And with the old man's memories, I end this tale of the grandson of Marcus Carter.

Posted by Jobs Children at 3:11 AM