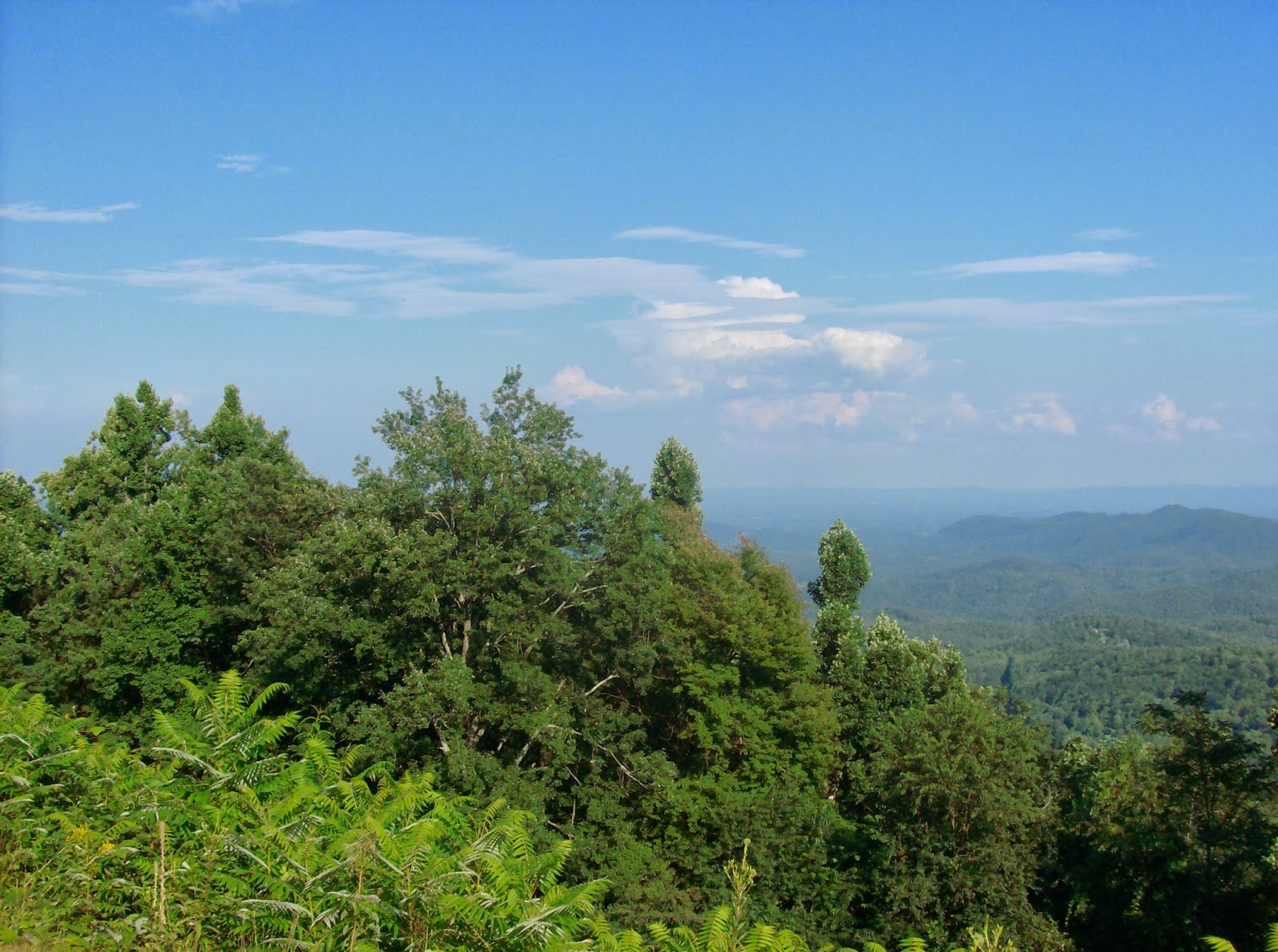 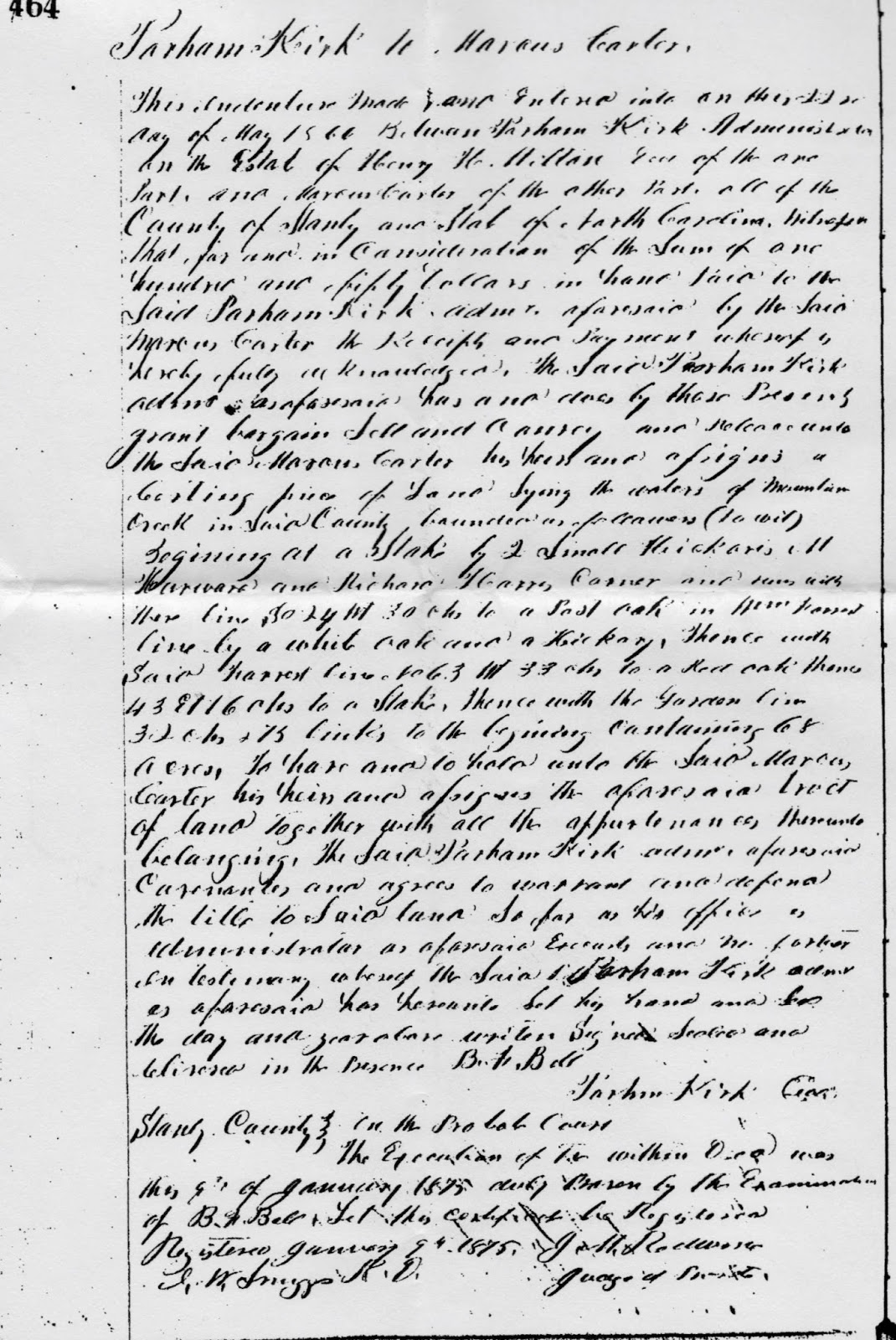 I first made mention of Marcus P Carter in my post "The Letters of Henry H. Melton".  Marcus Carter and Henry Melton were apparently friends. Henry had made it a point to write to Marcus when he was away at war and  also to have Marcus watch after his family when he was away. Henry did not make it back home.  Marcus would purchase the land that Henry lived on from the executor of his estate, Parham Kirk. They were obviously already neighbors, according to the letters. The questions arise of how Marcus P. Carter was related to the other Carters in the area, if at all. His daughter Sarah, would grow up to marry John A. Russell, son of James Roberson Melton and Temperance Russell, all who resided in the small town of Albemarle, North Carolina during its early years. Still out there is the determination of how James R Melton ties in to the other Meltons, he definately is related, due to close dealings with them, but just exactly how? And also to the origins of Tempie Russell, and how both James and Tempie were closely associated with the founding family of Albemarle, the Hearnes.

The Letters of Henry H. Melton

In census records, Marcus and his young family first shows up in Montgomery County, living near several Tolbert families. A Whitson Tolbert is next door.

His oldest three children have been born, his wife is two years older than he. Francis Caroline, at age 9, declares her parents 17 and 19 at her birth. Marcus's profession is simply given as "Laborer". Perhaps he worked for the Tolberts.

In the 1860 census, Marcus and his family were enumerated 3 times. In each one, they had different neighbors. Many families were left out, The Carters were well accounted for.

This 1860 version has  Lucy as the youngest child.  This one was taken on August 1, 1860, by J. McCorkle, and lists him in the area of the Albemarle Post Office with several Millers as neighbors. His occupation is 'Farmer'.

On this one, two children younger than Lucy, a Julia and a John is listed. Lunda's shown as older than Kinchen. This version gives Marcus's age as 39 and Nancy's as 37, and his profession as a shinglemaker. The Post Office was still Albemarle, and the census taker was the same, except this one was a bit earlier, on June 30th. Perhaps Mr. McCorkle did not realized he had already enumerated this family. Sarah has been left out. His neighbors were all Thompsons, Ben, John, William and George. Which makes sense, as the location of the Thompson cemetery is not far from that of the Carter Cemetery.

In this last one, at an even earlier date, June 22, Marcus is younger still, as is his wife. Frances is Frances again, instead of Fanny, but Kinchen has become "Kenchie", which may have been his nickname. Sarah and Lundy are there, in the correct order, but there is no 8 year old Julia or 5 year old John. Instead, there is a 5 year old Caroline. Same Mr. McCorkle doing the counting and the post office is in Albemarle.

His neighbors in the last one are given as J.M McLester, Parham Smith, J M Bivens, Guilford Harris, and Clementine Melton, with her younger sons Atlas and Preston. Her husband, Joseph Melton and older son Green J. Melton are missing from this census. I've wondered where they were and what they were doing.
By 1870, Fanny and Sarah are married, leaving only Lucy at home. The other children have died. Marcus and family are still in the area of the Albemarle Post Office. Their neighbors being Frank Melton, with wife Martha and daughter Fannie, Martha Melton, widow of his friend Henry H Melton, several Forrests and the Green Ross family and David Rummage family. Marcus is just a family.

The last census Marcus Princeton Carter will appear in is the 1880. He is by then an old man, Lucy is still at home and he and Nancy have gotten custody of the living children of daughter Fannie, James Thomas Shepherd and his sister Lundy Cornelia Shepherd.

Land records show that his lands were split in 6 shares. I know that John Russel and wife Sarah Carter Russel were one share and daughter Lucy. J. Carter Kearns recieved another share, while Tom and Nealie Shepherd, children of Fannie were two other shares.

Marcus Carter and members of his family are buried near the area called "Green Top" in Stanly County, east of Albemarle, not far from the Swift Island bridge across the Yadkin-Pee Dee River. There are 6 marked graves and 4 not legible. Perhaps the 4 are the mysterious children, "Julia, Caroline and John" and one other who did not make a census. The markers read:

The proximity of the dates of the death of Kinchin and Lundy lead me to believe they may have died from a contagious disease.

Kinchin Carter was 20 years old at his death. He was the right age to have been drafted into the Civil War, however, there are no records that he enlisted or was conscripted. I looked into records concerning health, mental status or dependency in Stanly County and found nothing that would give a reason that he was not a soldier.  That does not mean he did or did not have a mental or physical handicap that may have precluded him from serving. Finding tales of men literally forced and blackmailed into joining the army, it is hard to see how he just missed it, was overlooked, or just chose not to serve.

The toddler, William W Shepherd was no doubt the son of Fannie Carter and husband William Edmond Deberry Shepherd. His father was named William Wilson Shepherd, and likely, the baby William's name was William Wilson also.

The following is the family tree downward of Marcus Princeton Carter and his wife, Nancy Ann Marks Carter. Unknown is his family tree from himself upward. Was he a member of the Carter family that here existed, a descendant of the esteemed Revolutionary War soldier, Samuel Carter? Or did he migrate from somewhere else? Perhaps someone will find the name of Marcus in a record that gives a hint toward this information.

Other possible children: Laura (1852), John (1855) and Carolina (1855). These may have died as small children and could account for the unmarked, unreadable stones in the family cemetery.

So where did Marcus P Carter live before his appearance in the 1850 census? Were he and Nancy married in Montgomery County? Who were Nancy Ann Marks Carters parents? Why was this family not polled for the war effort? What saved Kinchen, at least from going? Was there a epidemic about in 1865 that took the lives of both Lundy and Kinchen that summer?

These are questions there may never be an answer to, now that Tom Shepherd and his sister Nealie, both who lived with their grandparents for awhile, have passed.

Posted by Jobs Children at 5:43 AM