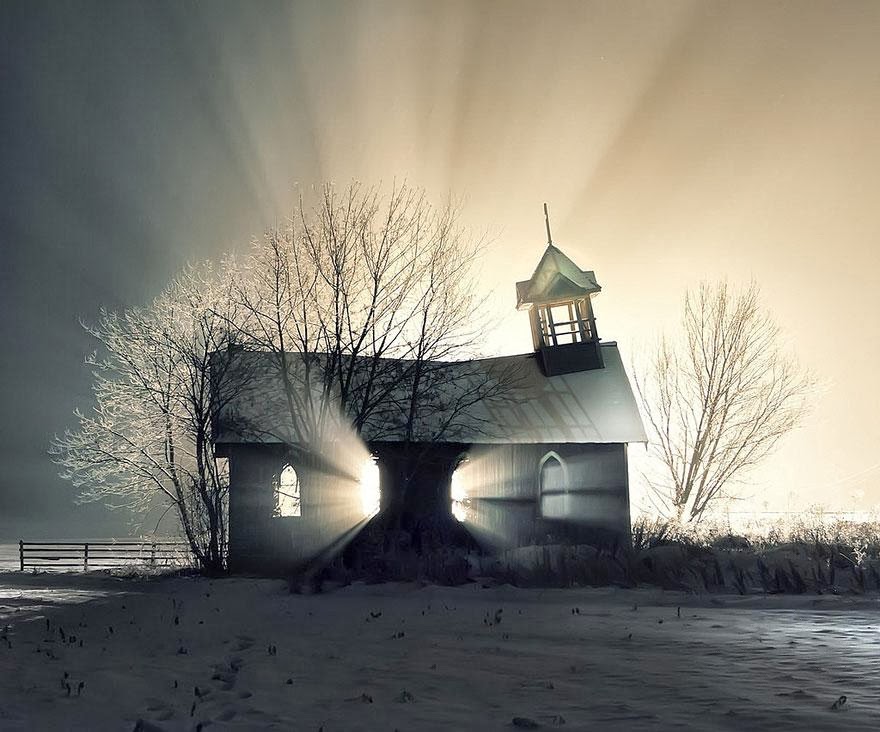 The rolling hills of old Stanly County, North Carolina was full of stories, and that of Tempie Russell was but one of them. Temperance "Tempie"  Russell became a member of the Melton family of Stanly County in an off-handed way.

It begins in the middle, with the marriage of 26 year old John Russell to 24 year old Sarah Carter on November 1, 1874 by Justice of the Peace, S. S. Stone.

Marcus Carter was a close friend of Henry Harrison Melton, as provided by Henry's Civil War correspondence before his death.

Marcus P. Carter started on the Montgomery County side of the Yadkin River and by 1860, had moved to the Stanly County, or west, side. He would also serve in the Civil War, but survive it, unlike Henry H. Melton.

The first time that Temperance "Tempy" Russell, mother of John Russell, shows up in Albemarle is in the 1860 census, with her young son John "A" Russell.
She is living in the Albemarle Post Office District, following the Stephen and Dicy Saunders family and before Nancy Solomon and her family. One of the Solomon's, Fanny, had married Jarrett Russell. It's not yet known if Tempy was related to that family.

Ten years later, Tempy (the transcriber wrote "Pompey") is shown as keeping house while her son is a Shoemaker. This trade ran rampant in the Melton family. Joseph Melton, especially, followed the trade of shoemaker. Perhaps he taught John Russell the trade.

By 1880, she is living with her son and his wife Sallie Carter Russell.

By 1900, Tempy is the Head-of-Household with her son, daughter-in-law,  their daughter Eva Evelyn and her husband, John Eudy.

Tempy is not listed in  the next census if 1910. She is buried in the Old Albemarle Cemetery, otherwise known as the PeeDee Avenue cemetery. The dates on her tombstone are illegible, but it says "Tempy Russell". She is buried near her daughter-in-law, Sarah Carter Russell. Eva has left her husband, John Eudy, by 1910. She alone, is living with her parents, along with a boarder, Bob Hatley.  The next year, Eva Evelyn Russell Eudy, obtains a divorce from her husband John Eudy.

By 1911, she married Ed Harbison. This marriage had obvious problems as well, as by 1920, Ed is living with his sister Martha and her husband, Frank Herndon, along with their younger brother William Roy Harbison and a 9 year old girl, Dora, listed as a niece. Ed's marital status is given as "Divorced" and Roy's as "Widowed".  However, on Eve Evelyn Russell Eudy Harbison's death certificate, she is listed as married, and the informant is none other than Ed Harbison.

Eve and Ed are buried together at Greenlawn Cemetery in China Grove, Rowan County, North Carolina.

So, the story of Tempy Russell, just from the progression, seems nothing out of the ordinary, just a woman who had a son, who had a daughter and that is the end of the tale. But Tempy was anything but an ordinary lady. Records clearly show an air of mystery surrounding her and then there is her relationship with the practical and resourceful, if not somewhat arrogant and stern, James Roberson Melton.

Tempy, when we are sure it's our Tempy, shows up first in the 1860 census of Stanly County. She is living in the tiny town on three hills, called Albemarle, on Long Creek in Albemarle, part of the old Hearne plantation. Business man James R. Melton had a very close relationship with the Hearnes, and that is another story on its on. He was one of the youngest of what I'll refer to as the second generation of Melton's and my theory is that he was still underage when his father died, so he may have been 'bound out', as an orphan, or half-orphan, to one of the Hearne's, who aided in his raising and his start in business, but those records would have been recorded in the burnt county of Montgomery, prior to the birth of Stanly in 1841, and are forever gone. All that there is definite proof of is his close relationship with the Hearne's, and his business partnerships with them.

Tempy is not found in Albemarle in the 1850 census, when her son would have been a toddler. 1848 is also the year that James R. "Jim" Melton married his wife, Mary Ann Kirk.

In the 1850 census, after John Russell was born, Jim Melton is shown in  the town of Albemarle, listed as a Shoemaker, which was a common profession in the Melton family, most notably for the oldeset son of John Melton, Sr. , Joseph Jr.

Living with Jim is his bride, Mary Ann, and their first born son, Davidson Hearne Melton. They were living right next door to Davidson Hearne, for whom Davidson H. Melton was obviously named for. Other neighbors were Richard Carter, Wiley Hutson, and carpenters, Henry H. Melton, his wife Martha Kirk Melton and Robert T. Melton and a one year old Julia A. Melton and Mary Melton, mother of Robert and older sister of Henry.

By 1860, James R Melton is still living in town, but is now a grocer and he and Mary Ann have added a daughter, Ellen Douglas Melton and another son, William Thomas, to the family. Living with him, or possibly in a small house next to him and between he and Davidson Hearne, is Charlotte Melton, also seen in records as a single woman. 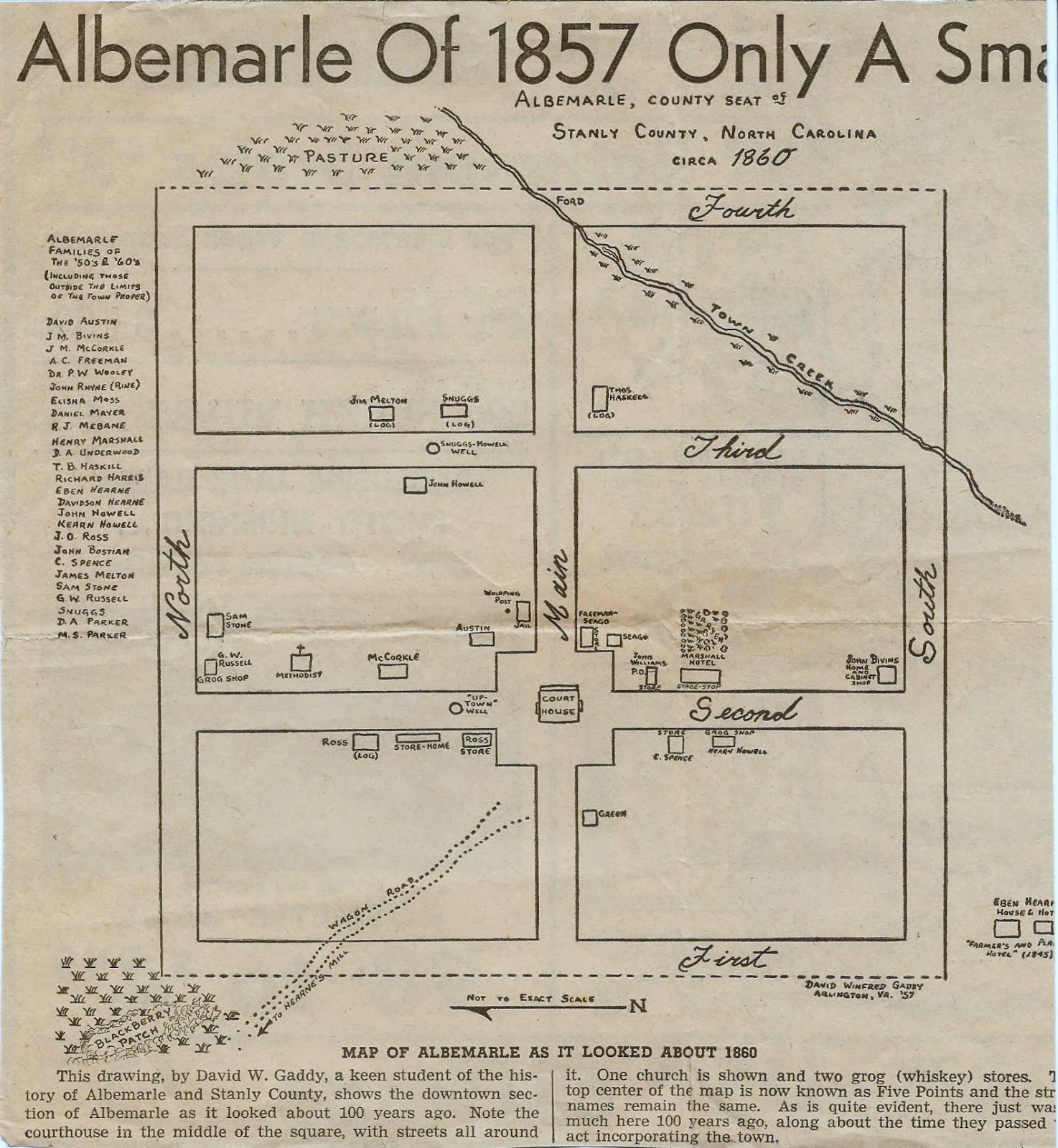 A drawn map of Albemarle in 1860 showing location of the Jim Melton family.


But to determine exactly when Tempy Melton was born as well as her son John, we must look at each census she shows up in and see if they agree, or the range they put her in.

Twenty years later, in the 1900 census Tempy is now listed as 76, with a birth year of 1824. John remains with a birth year of 1848, and a birth month of May. He is now a Harnessmaker, and his daughter Eve and her husband John Eudy, a house carpenter, are living with he and Sallie and Tempy, apparently in the same little house in the same location.

Sallie Carter Russell lived to have a death certificate and names her parents as Nancy Marks and Marcus P. Carter. The origins of Marcus P. Carter are as mysterious as those of Tempy Russell.

There are a number of tax records available in the Heritage Room at the Stanly County library. One of them, from 1865, just after the end of the Civil War, lists "Miss Tempy Russell" owning "1 lot" with a value of $50, in District 9.

Another later tax book lists Tempy Russell with one lot, no age. Isaiah Russell with 228 acres, age 53 and J E Russell with 22 acres. This may have been Tempy's son John whose middle initial kept changing from A to E to H. 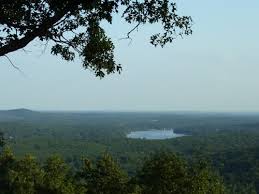 So Miss Tempy, who owned a little plot of land,  must have a deed in the land records, and certainly enough, she did.

This Indenture made this 9th day of February, 1857 between Davidson Hearne of the County of Stanly and state of NCarolina of the first part and Tempy Russell of the County and State aforesaid on the second part"

Davidson Hearne, partner, neighbor and associate of Jim Melton, sold to Tempy Russell, mother of a son with Jim Melton, a parcel of land. Who was Tempy to Jim Melton and Davidson Hearne? Who were her parents? As her son was born in 1848, she should have been some where neaby in 1850. Did Jim Melton teach his son the trade of Shoemaking?  Next, a look at Tempy's little piece of land.

Posted by Jobs Children at 8:12 AM