The Will of Temperance Russell

Temperance aka "Tempy" Russell, a seamstress and single mother, who lived in the small but growing town of Albemarle, North Carolina during the latter half of the 19th century until a little past the turn of the century, owned a little plot of land and left a will, that shows a little glimpse into her personality.

She took care of her family, in a time when it was very difficult for a woman without a husband to do. And when it was time for her family to take care of her, she made it clear in her will who had and who had not. 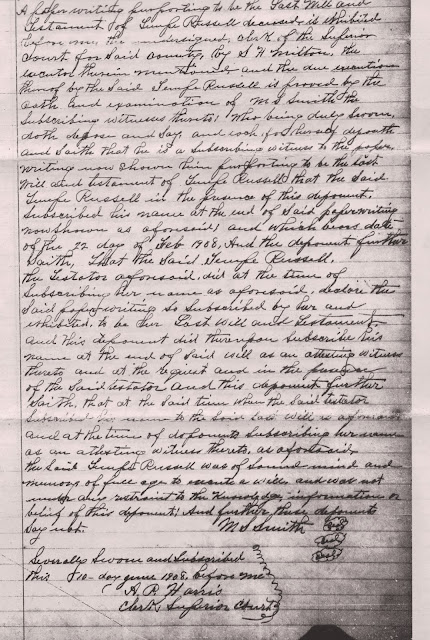 Tempy's will comes in three parts: The first part is that of witness statements testifying to the validity of the will. The second part is an addendum from A. P. Harris, the clerk of court accepting the will as authentic, and the last part is the will and the words of Tempie Russell herself.

The first two sections are merely legalese, and far too lengthy and boring to repeat word for word. Yes, I said it...boring...withall and hereto of the first part etc. etc. ad infinitum. They basically state that  A. P. Harris, Clerk of Superior Court, who is also involved with the family in a land transaction, has before him a piece of handwritten paper purported to be the will of Tempie Russell. It has a date of  February 22, 1908 and two witnesses, M. S. Smith and Ada Hathcock,who both testify, sign and seal to the statement, that they were present at the writing of the will and verify that it is actual and true and that no one coerced Tempy into writing it, and that she was also in her right mind, or "of sound mind and memory and of full age to execute a will".

And now for Tempy's will:

I Tempy Russell of the aforesaid county and state being of sound mind and memory, but feeble in health and knowing that my earthly existence according to my age is drawing to a close, and being desirous of disposing of what worldly effects I possess while I am living, make and declare this to be my last will and testament. In manner and form as follows: Viz

First    I desire that my executor hereinafter mentioned shall provide for my body a decent burial suitable to the wishes of my relatives and friends.

Second   I will and bequeath to my granddaughter Eva Eveline Eudy, wife of John Eudy all my personal property consisting of Household and Kitchen furniture now in the house where I live and all the house and lot where I now live. Being in the South side of the lot deeded to the said Eva Eveline Eudy, dated April 22, 1901, containing one half acre, more or less.

Third  This last devise, item second, is made to the said Eva Eveline Eudy, with the proviso that John Russell, my son and Sallie Russell, his wife, have a house there as long as both of them shall live, and with the understanding that the said Eva Eveline Eudy and her husband, John Eudy, see that they, the said John Russell and Sallie Russell, is provided for and taken care of during their natural lives and at their death, see that they are decently buried.

Fourth   My will and desire is that all of the property devised to the said Eva Eveline Eudy be hers to have and to hold during her natural life and at her death, to her bodily heirs, if she has any. If she has none, it is to be hers to will and to do with as she sees fit, provided however, that she comply with Item Third of this will.

Fifth    I will and devise to my grandson William Henry Russell, son of William Henry Russell, late of Augusta, Georgia, one dollar to be paid to him by my executor, When called for. I make this difference between my grandchildren for the reason that the said William Henry Russell has never lived in this part of the country and has done nothing for me, and I hope he is able to live without it, and for the reason that the said Eva Eveline Eudy, and her father and mother, has always lived with me, or near me, and have administered to my wants, in so far as they were able, and always treated me with respect and affection.


In the presence of us who at her request and in her presence subscribe our names as witnesses.

So, here are the hints Tempy gave us:

One, her grandson has never lived in this area.

Four, we also know that William Henry Russell, Sr. was not living with Tempy in the 1860 census, or any of those afterwards.

So where was William Henry the first in 1860? Where were Tempy and her boys in 1850? When and why did he migrate? When was he born and when did he die? Who was his father? Was he also a Melton?

So, the search for William Henry Russell is on, along with the origins of mother Tempy and also the origins of Sallie Carter Russell's father, Marcus P. Russell.

Samuel Houston Milton served in several legal, political and business capacities in turn-of-the-century Albemare. Around the time of Tempie's will, he was the Mayor. Tempie evidently had strong ties to the Melton family. Can I find any more trace of her or her sons?

Posted by Jobs Children at 5:21 AM