Oklahoma Territory Sutton, or O. T. was the husband of a descendant of Job Davis, Elizabeth Ingram. The following is his obituary:

O.T. Sutton
Funeral services were held on Wednesday, September 28, 1988 at Eckols Chapel in Kenedy for O.T. Sutton. The Rev. W.R. Menke Nad Robert L. Wimpee officiated. Interment was in the City Cemetery.
Pallbearers were Jimmy Sutton, Roxie Robinson, Ralph Sutton, Glen Sutton, Mark David and Douglas Wood. Arrangements were by Eckols Funeral Home of Kenedy.
O.T. was born in Sayre, Oklahoma on April 21, 1902 to LaFayette Fate and Abida Hawkins Walton Sutton and died on September 26, 1988 in Kenedy. He was 86 years, 5 months and 5 days of age.
O.T. had lived in Kenedy since 1954. He was married to Elizabeth Ingram on September 21, 1954 in Kerrville, Texas. He was a retired gauger and welder. He was active in Lone Star Fiddler Association, Old Time Fiddler Association, and United Fiddlers.
Survivors include his wife, Elizabeth Sutton of Kenedy; two sons, Russell W. Sutton of Brazoria, and Dell Sutton of Seguin; a sister, Oma Curl of Jourdanton; 6 grandchildren, 16 great-grandchildren and 3 great-great-grandchildren. He is preceded in death by his parents, 12 brothers and sisters, a wife, Ruby Sutton and a daughter, Virginia Reed Sutton.
Parents:
LaFayatte Fatie Sutton (1861 - 1948)
Abida Hawkins Walton Sutton (1862 - 1956) Whomever thinks that Genealogy is boring was not an apple that fell off the Davis tree. In researching the descendants of Job Davis, I have came across a wide-range of characters, and possibly none more colorful or charismatic than Mr. O. T. Sutton. Beginning with his name.

Every family tree is full of stayers and goers. America was founded by "Goers", persons with enough derring-do, desperation or hope to make the long journey from whatever their country of origin over to a new and unknown land. Even those sent against their own will, whether children kidnapped and sold off the streets of London, poor Irish, convicts, or enslaved Africans, the survivors of which were the strong, the hopeful, the adventurous. The ones who had enough inner continence to persevere, to believe in a better future, the will to survive, are the ones today's Americans are descended from.

One trait I've noticed about our Western cousins were the unique and descriptive names they gave their children. Place names were very common. I've came across many girls named Missouri, or Florida, or Louisiana or Texie or Texanna. But "O. T. Sutton" was the only fella named Oklahoma Territory I've ever came across.

His unique moniker also fit his personality well. He was such a warm person, his descendants decided to convey this message on his tombstone. 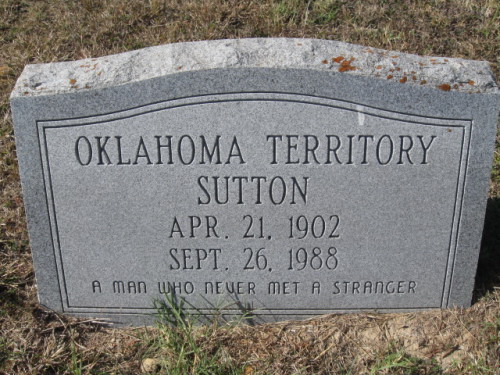 "A Man Who Never Met A Stranger", what better statement could anyone ask to leave this world with?

Oklahoma Territory Sutton, born to be a character, was born on April 21, 1902 in Beckham County, Oklahoma. He was the son of Lafayette "Fatie" Sutton and his wife Abida Hawkins Walton Sutton.

An 1892 Interview with "Fount" Sutton, grandfather of O. T. and father of Lafayette Sutton, told of how he left Texas with his family when he had heard of the free grassland in Oklahoma. He brought a wife, 6 children and 40 head of cattle with him. He made the run, planted his stake and was the first man with a family on Timber Creek. They lived from a tent and wagon until he was able to build a dugout. Two more children were born on the claim until 1898, when he would bury his wife, with another infant, in the first factory made casket in the town cemetery. His children were educated in a dugout school.

Fate, one of the older children, would marry one of a set of twins, Abida Walton, and have 8 children. Okalahoma Territory would be the youngest son, and 7th child.

By 1910, Fate and Abida had moved their now complete family to Chaves County, New Mexico, were he farmed.

Posted by Jobs Children at 5:57 AM