George D (possibly David) Morton shows up in the 1860 census of Anson County.
It's an oddly arranged household. George is a 39 year old bootmaker with $1650 in real estate and in  $1200 personal estate. Living with him is 25 year old James Haire and 47 year old James Bennoit from South Carolina. After the 2 James's come a line of children, William 7, Hampton 5, and Flora 2, who are George's own children. Lastly, his wife Mary is listed at age 27. Normally, the Head of Household leads the list, followed by spouse and children. Any borders, relatives, or household employee and farm hands are listed last. But not in this case. 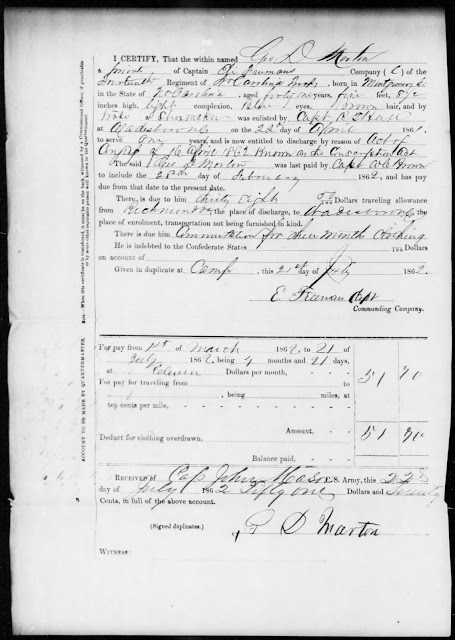 I don't know where George D. Morton was in 1850, but his military papers from his term in the Civil War state he was born in Montgomery County. So here we have yet another George.
I've already blogged about George Simeon Morton, who fought in the War of 1812, was born in Prince Edward County, Virginia, married Elizabeth McSwain in 1814 at her father's house on the Stanly County side of the river, and moved with relatatives, McSwains and Throgmortons, to Henry County, Tennesee.
For The Love of George
Then there was George Crogin Morton, younger brother of Rev. Samuel P. Morton, who moved to Webster County, Missouri.
Pim - The Story of George Crogin Pimberton Morton
Rev. Samuel P. Morton also had a son, George Arnold Morton, who also moves away, and I will be getting to him eventually. but now we have George D. Morton. I acutally have more information on his wife, Mary, than I do George.
George married Mary Jane Carpenter, daughter of William Guilford Carpenter, on June 24 1853, in Anson County. He had brought his Cedar Hill bride to the County Seat of Wadesboro, were he was said to be in the Manufacturing Business.
As he is listed as a Bootmaker in the census, perhaps his two tenants, Mr. Haire, and Mr. Bennoit were employees and fellow Bootmakers. 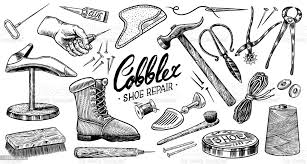 In Anson County deed, Book 15 Page 605, George D. Morton and wife sell for $250 to James Martin, a tract of land on Jack's Branch adjoining the property of James Martin, Matilda Carpenter and others. James Martin was the husband of Mary Jane Carpenter Morton's sister, Ann, who lived next to them in Cedar Hill Township in 1850. Cedar Hill is located in the northeast corner of Anson County, just below Rocky River which forms the Stanly County line.
The property was 41 acres that met Lucy Martin's corner and was the land 'drawn by Mary Carpenter in the division of her father's estate'.
In 1861, in Book 16, Page 194, Joseph Carpenter, Allen Carpenter, George Morton and wife Mary, Merritt Tyson and wife Eliza, sold to Thomas Henley for $100, or $25 to each of the 4 parties, for a tract of land,
"which has descended to us due to the consequence of the death of Susan Carpenter and H. M. Tyson who intermarried with A. J. Tyson in Lot 2 containing 41 acres of the lands of William Carpenter which was alotted to his daugher, Susan Carpenter, deceased."
And then came War. George D. Morton, 33, Served in  Company C, 14th Infantry. His trade was as a mechanic.  He was wounded at Malvern Hill.
Name
George D Morton
Enlistment Age
33
Birth Date
1828
Birth Place
Montgomery County, North Carolina, USA
Enlistment Date
22 Apr 1861
Enlistment Place
Anson County, North Carolina
Enlistment Rank
Private
Muster Date
22 Apr 1861
Muster Place
North Carolina
Muster Company
C
Muster Regiment
14th Infantry
Muster Regiment Type
Infantry
Muster Information
Enlisted
Casualty Date
1 Jul 1862
Casualty Place
Malvern Hill, Virginia
Type of Casualty
Wounded
Muster Out Date
21 Jul 1862
Muster Out Information
disch
Side of War
Confederacy
Survived War?
Yes
Residence Place
Anson County, North Carolina
Occupation
Mechanic
Title
North Carolina Troops 1861-65, A Roster 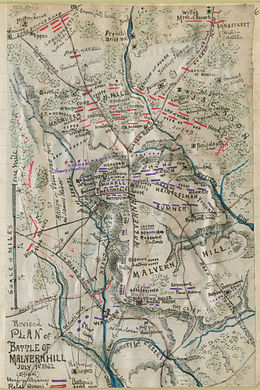 George D Morton tended to jump census records. As I have not located him in the 1850 census, so went the 1870. But we can get an idea of where he was around this time as his son Guilford gives his birthplace as Black Hawk, Carroll County, Mississppi in 1869.  His family may have been in transit.
The family chose Grayson County, Texas in which to relocate.
Posted by Jobs Children at 4:45 AM