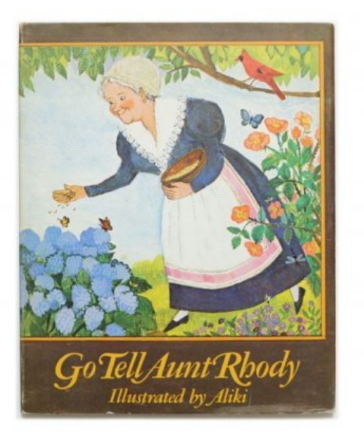 Something about Rhoda Porter piqued my interest the moment I saw that she lived right next to Isham Ingram in the 1840 census of Cedar Hill, Anson County, North Carolina. I had already been into the Porters a bit while researching my Turner roots from the same area. One of the sons of James Turner and Susannah Axom Turner, my 5th Great Grandparents, had married a Porter. But Rhoda was one I had not seen. 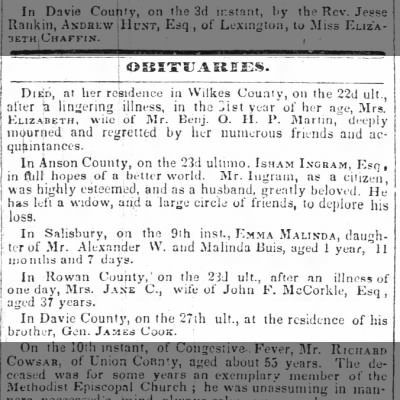 Isham Ingram died in 1846, and his widow, Lucy Martin Ingram, had remarried  two years later, to my 4th Great Grandfather, Rev. Samuel P. Morton,  whose daughter had married the grandson of the aforementioned James and Susannah Turner. Rev. S. P. Morton had acted as the administrator of the estate in 1858, some 12 years later. In that estate was a list of 9 distributees, or heirs of Isham Ingram. As he and Lucy had no children to speak of, or at least none living at the time of his decease, nor grandchildren, the estate, after Lucy's remarriage. his estate was distributed equally to his 9 siblings, for $ 370.28 each. These were Joseph Ingram, Hezekiah Ingram, Trecy Ingram Turner, Rhoda Ingram Porter, Sally Ingram Ingram, Parthenia Ingram Thomas, John Ingram, Matthew Ingram and Wiley Ingram.

I've spent the last two days trying to determine which Ingram was which, as they were a multiplus crew, and a traveling bunch on top of that. So, I've not had complete success in that area. I know from his will that his sister Sallie lived in Alabama. I knew who Trecy Turner was, but not whom she married. I had remembered seeing Rhoda, so the Ingram search is rather intense.

As for Rhoda, I know who she married.

I also know the fate of that marriage.

-DANIEL PORTER – Married Rhody INGRIM [Rhoda INGRAM] in 1800. Shortly afterwards she “was Guilty of acts of lewdness, and Adultery” and has since had a bastard child. He has offered to be reconciled to her, but she is unwilling. She now live apart from him and has not live, or cohabited, with him for upwards of four years past. Prays for a divorce. Signed: Daniel PORTER. Neighbors who certify the facts: James COLEMAN, _. R. PICKETT, Ingor D. CASH, John SMITH, Thos. THREADGILL. (undated, but referred to committee by the House on 16 Dec 1813.) (Recommended in committee report of 24 Dec. 1813 to be postponed indefinitely.)

So, Rhoda Ingram married Daniel Porter in 1800 and he filed for divorce in 1813. He stated she had had a bastard child, but if they were married, how would the child be illegitimate? He offered to reconcile, she turned him down. She began living apart from him in about 1809 and had not lived with him in 4 years. She was mother to at leat one child.

I found Daniel Porter in the 1800 census, next to John Ingram and James and Hezekiah Hough. The other two Porters in the county were Barnabas and Charles, side by side and in a different part of the county.

He's between 26 and 44 years old, with a little girl under 10 and another 10 to 15, and I don't think she was Rhoda. There were also 5 slaves in the household. He married Rhoda Ingram this exact year, probably after the census. So, it looks like Daniel was a widower with two young daughters. He may have been quite a bit older than Rhoda.

I don't find Daniel in the 1810 census of Anson County, but Barnabas was back, living in the same general area as James Turner and Isham Ingram, who lived next door to his sister, Trecey Turner. There's no Charles or Daniel, but a Drury Porter shows up, next to Anglica Seigler, whom I've blogged on before. Could Drury and Daniel be one and the same?

There was a Daniel Porter who served in the Revolutionary War in Virginia. Was he the same Daniel? 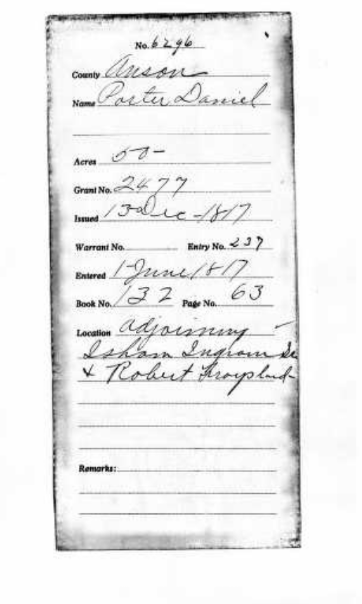 Another odd coincidence was that although Daniel Porter does not show up in the 1810 census, in 1817, he acquires a land grant that adjoins the property of Robert Frayland (?) and Isham Ingram, Sr., Rhoda's father.

In 1820, everything is in alphabetical order, so there is no proximity to others enumerated in the same area, but there are 3 Porters, Charles has returned, Barnabas is still there, and now there is Rhoda. And she is not alone.

No sign of Daniel and Drury has moved south of the Carolina border to Chesterfield County. It is my belief that Daniel was probably dead.

In 1830, Rhoda is found living right next door to her brother, Isham Ingram. This time she is heading a household of 8 people. Rhoda is said to be in her 40's, or born between 1781 and 1790. There are two females in their 20's, or born between 1801 and 1810. These could have been the two in the 1820 census. We'll call them Daughter One and Daughter Two, for lack of any real knowledge of who they were. There's also a male in his twenties, who was not in the last census. We'll call him son-in-law One, or perhaps wannabe, or maybe a fieldhand. Or maybe he was a son returned, one who had been bound out as a child due to illegitimacy that Rhoda had been accused of in 1813. There were two boys born between 1816 and 1820 who could very well have been the two under 10 in 1820. I'll call them Grandson One and Grandson Two. The little girl in their age group has disappeared, perhaps dead, or perhaps, if she were closer to 10 in 1820, married as a teen within the last few years there. Two additional little boys have joined the homestead, both under 5, so born between 1825 and 1830. I'll call them Grandson Three and Four. A Jesse Porter has turned up in Anson County, and we find Charles Porter next to James and Axom Turner, my 5th Great Grandfather, and his oldest son, and Barnabas Porter is living next to Stark Ramsey, another ancestor of mine, who I know lived in Burnsville, but on the same page with Charles Porter. 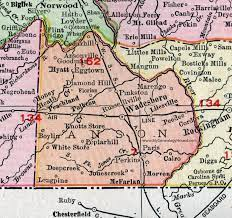 Rhoda's last census was that of 1840. She's again listed next to her brother, Isham Ingram, and close by are Joseph Ingram, another brother, and Joshua Ingram. Also closeby in Milly Turner, her niece, who appears to be taking care of Treasy Turner, Milly's mother and Rhoda's sister, as the 3 dashes fit the ages and genders of Milly, Treasy and Milly's son, Alexander.

This time, the girls are gone and only one family member is left with Rhoda. Rhoda's age is given as in her 60's, or between 1770 and 1780, and a young man in his 20's is with her, employed in agriculture.

Barnabas or Barnaby Porter is sitll with us, and appears to be in the same place, near Thomas Drew, Allen Carpenter and Samuel Exum. There's a few new faces, a William Porter, in his 30's and a woman in her 20's, with children, probably his young family, but there is also a woman in her 50's, maybe his widowed mother or mother-in-law. He's near Robertson Pistole, so sitll in the same general area of Burnsville. Lastly, there is Alex Porter, a young man in his 20's with a teenaged bride, 15 to 19, just the two of them.

The last report I have, so far, of Rhoda Ingram Porter is in the estate file for her brother, Isham Ingram.

The exact paragraph, as written in form for all of the 9 heirs was;

I believe Rhoda Porter had died before 1858, but maybe not. People were missed in the census records quite often. My question was, who were the other people in her household? Were they her children and grandchildren, and if so, who were they and what happened to them? Who were Daniel Porter's daughters by his first marriage? And who was Daniel Porter to start with?

In Treacy Turner's portion of the estate papers, the last name listed was that of Burwell Braswell, her son-in-law and Executor. In Parthenia Thomas's case, it was Isham Thomas, her son. Thomas Ashe and William G. Smith are listed in most every case and I believe they were just accountants or clerks. But was William Little related to Rhoda?

The 1850 census of Anson County is filled with various young Porters. Most have been tied to either James Barnabas Porter, who died about 1846, and his wife Levicy Gresham Porter, others to Charles, but most of his line migrated southward and west.

I know of two daughters to Barnabas Porter, Patience Porter who married Axom Turner and migrated to Alabama, and Elizabeth Braswell, born about 1810, who named a son Barnabas Porter Braswell. 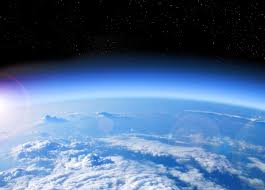 I put this forth into the stratosphere, in hopes to connect with some Porter family expert who knows more about Daniel and Drury and Barnabas and Charles, and perhaps even Rhoda. I've met wonderful distant cousins, and other passionate researchers since I started blogging, who have had information I would never have known any other way. I hope the case of the Anson County Porters may be the same.

Posted by Jobs Children at 5:52 PM