The Setting of the Son : The Will of Job Calloway 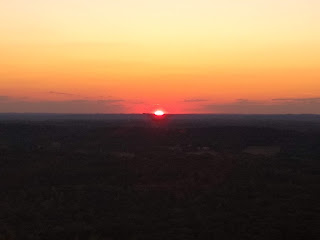 As all things begin, so then must they end. On March 10, 1837, Job Calloway, of the Western part of Montgomery County, North Carolina, knew his days were numbered. He was weak of body, and ill of health, and knew it was nigh time to get his affairs in order. Only 47 years old, only 3 of his 10 children had reached adulthood. His loving and dutiful wife drew near, knowing widowhood was upon her and most likely filled with sorrow and fear. But faith would hold her, her two married daughters, Mary Calloway  McLester, and Vashita Calloway Morton, lived near and would provide emotional support and help with the younger children. She had 4 strong sons in their teens and early twenties to work the farm and help provide for the family, and a fifth not close behind; Isaac 23, Elmore, named for her mother, Leticia "Lettie" Elmore Randle, 20, John C. 18, Arippa 14 and Alfred 10. The family was completed by three little girls, Cassie (Cassandra) 9, Sallie (Sarah) 8 and Tishie (Martisha) 3. 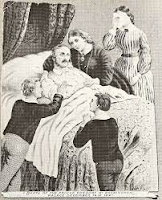 Job called two of his  trusted friends and neighbors, Nelson Pennington  amd Joseph Clayton, to witnesses the act of his writing of his will. He named his son-in-law, Samuel P. Morton, a godly and well-studied man, to be his Executor. His life should not have been but half over at least, yet, his wordly vessel was giving way, there was not time to wait. So he began:

"In the name of God amen, I Job Calloway of the County of Montgomery and State of North Carolina being weak in body and low in health but of my right mind knowing shortness of life and  certainty of death make this my last will and testament and + desire my wordly goods to be disposed of  in the following manner.

1st I recommend my spirti into the hands of him who first gave it + my body to the earth from whence it was first taken to be buried after a Christian manner at the descretion of my Executor.

2nd I give and bequeth to my beloved wife after my debts are satisfied or paid all the balance of my property to her to use for the use of raising the little ones of her body, the same property (if any) and love to her during her widowhood + after her death or end of her widowhood the property to be divided equally between my children.

3rd I give to my eldest daughter Mary McLester property to the amount of $70 which property she has got.

4th I give to my second eldest daughter Vashti Morton property to the amount of $70 which property she has got.

5th I give to my eldest son Isaac Calloway property to the amount of $70 which property he has got. the above mentioned children having their property now in hand are not to recieve anything more until all the rest of the children recieve $70 each if there be not that much, if not the three oldest above mentioned to pay over to the rest unitl all are equal.

6th I divide in this that 20 acres of land lying on the Yadkin River be sold.

7th I direct in my will that 400 acres of land at home be priced at $2 per acre + my 4 boys younger than lsaac buy the same + pay into the estate the amount thereof + as they come to the age of 21 they are at liberty to build, settle, + clear said land outside of the old premises so that there shall be no improvement on the widows peaceable possession + if they choose not to take their place in this land the said when called for by the 1st oldest or by any of the 4 when 21 to laid off equally + value accordingly to division + the drawed for by them four boys, viz, Elmore, John, Agrippa + Alfred.

8th I also choose for the Executor of this my last will + testament Samuel P. Morton as my Executor.

The document was filed in May of 1838

Job Calloway and his wife, Susannah Randle Calloway were my 5th Great Grandparents.

Job was the son of Isaac Calloway (Sr) and Elizabeth Arnold. The family originated in Maryland.

Susannah was the daughter of Colby Randle and Leticia Elmore. The family originated in Virginia.

I felt it important to reiterate his will, given the fact that I've seen Vashti given as the daughter of Isaac Calloway in so many lists, reports and family trees. Isaac was her grandfather, and she had a brother named Isaac. She also had an Aunt named Vashita for who she was obviously named, but the Vashti who married Samuel P. Morton was the daughter of Job Calloway.

Job was buried in the Calloway Family Cemetery with his parents, Isaac and Elizabeth Arnold Calloway. The cemetery expanded to include others in the community and became the Palestine Community Cemetery, located centrally between Badin and Albemarle. Susanna Randle Calloway would outlive Job by nearly 40 years. She died April 18, 1870 and was buried with her husband. The couple were the parents of 10 children, 5 sons and 5 daughters, beginning with two daughters, followed by 5 sons in a row and ended with 3 more daughters. He lost 2 sons in the Civil War, and 3 children migrated away, while the remainder stayed behind.  They were:

Posted by Jobs Children at 8:35 AM