Who Were the Griggs Boys? 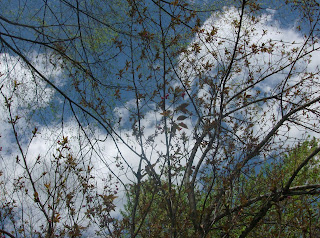 Two years later, on November 19, 1848, her widower, Rev. Samuel Parsons Morton married Lucy Martin Ingram. In the next census record, 1850, the very first one to give names, but not relationships, to the women, children and other people, like borders and hired hands, in the household, Samuel and Lucy are seen living in Cedar Hill, Anson County, with a number of children in their home.

First there is George Arnold 10, Elizabeth Wincy Morton 12, and Sarah 6. These 3 were Mortons, I know who they are and where life took them. Wincy was my 3rd Great Grand mother. Then there were 2 small boys, Lewis, age 3 and James W., age 1, who were obviously born after the death of Vashita C. Morton. Everyone has them pegged as being the sons of 44 year old Sammy and 52 year old Lucy. I just didn't see that as likely.

So, for years, I tried to find Lewis and James. Most just put it off as the too often case of child death that occured in those days, but my spidey senses, genetic memory, intuition, whatever you want to call it, was telling me that was not the case. I had the feeling that the reason these boys were not being found past 1850 was that they were not Mortons. People swapped children alot in those days, for various reasons.

So, I began a search for a Lewis, born about 1847, within a reasonable distance from the Morton family, say Anson and Stanly, possibly Union County, in 1860, when he would still be young and should still be living with a family or a guardian. I chose Lewis because it was a far less common name than James. The other criteria I was looking for was a Lewis of the right age, with a brother named James W. who was about 2 years younger.

And there were two.The next step was to see where  this Lewis and James W. combination were in 1850.

Lewis and James W. Brown fit the bill, and they lived in Tyson Community in Stanly County, that bordered the northern end of Anson County, where the Mortons were living. However, in 1850, Lewis Proctor Brown and his brother, James, were safely within the household of their parents, Lewis Tobias Brown, and his wife, Jane McIntyre Brown, in Tyson.

Then there was Lewis and James Griggs (misspelled Greggs), who lived in Gulledge, in Anson County, with John and Susanna Griggs. Correct names, correct ages, within a reasonable distance, but let's look at them ten years before, when they were toddlers, in 1850.

No Lewis (or Louis), no James, but there's John, and Alfred and Elisha? So where were Louis and James?

Why living with Rev. Sammy and his wife, Lucy, of course. The question is why? So, let's look at the Griggs family. Were they connected, somehow, to Sammy, or just church family perhaps? Were they related to Lucy Morton? That, I don't know at this point, but let's look at who they were.

The Griggs/ Greggs line that Lewis and James Wesley were heir to, began with John Grigge, an Irish immigrant, who was born around 1757. He served in the Revolutionary War as a Private in the North Carolina Militia.

The family settled in Anson County, NC and a second John, who took on the spelling Griggs was born around 1780. John II  married Fannie Rushing. They moved south of the border to Chesterfield, South Carolina, were they were parents to a third John. 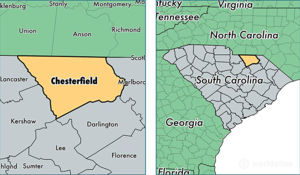 John Wesley "Jackie" Griggs was born in 1798, when his father was just 18, in Chesterfield County, SC. He would move back to Anson County, NC and settle in the Gulledge Community. 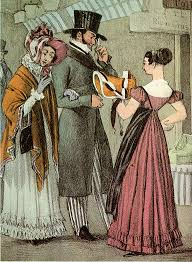 Jackie and Susanna would become the parents of 10 children:

James Wesley was Susanna's  last child. She was well into her 40's when he was born. Perhaps when 1860 rolled around, she was ill. With the boys just being babies in 1850, actually, I don't believe it was a matter of education. There may be an answer somewhere in a court record, but it's still my belief that Lewis and James W. Griggs were the two little boys living with Rev. Samuel and Lucy Morton. Susanna would die in 1864 and was buried in the Griggs Cemetery in Gulledge Township, which is located on what is known as "Littles Quarters".

Jackie Griggs (John III) would marry a second time to Sarah Ann Teal, daughter of Bart and Pinky Teal. There were 3 more children:

Lewis Griggs himself, he, like most young men of the era who were born in the 1830's and 1840's, ended up fighting in the Civil War.

One of the lucky ones, I suppose, Lewis survived the War and within a few years after the fallout, married and started a family.  Several of the children of Jackie Griggs married into the Gulledge family, the prominent gamily that the entire community was named for, and Lewis was one of them.

On Jan. 1, 1869, at the age of 21,  he married Miss Harriett Elinore Gulledge, 19, daughter of James R. Gulledge and Martha Howell Gulledge. I'm interested in this Howell connection, as there are Howell's in my Davis family tree. 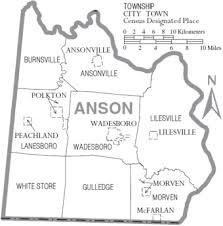 Lewis and Hattie, as she was called, settled in the area of Anson County called White Store, where she had grown up. White Store Township is located just west of Gulledge in the southwestern most corner of Anson County bordering both Union County, NC and the South Carolina border. There, they raised 3 sons and 6 daughter:

A few newspaper clippings of the family follows: 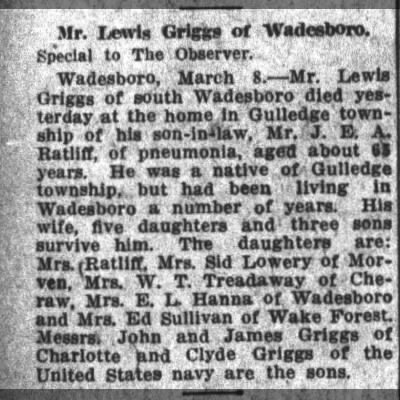 James Wesley Griggs chose a different route and became part of the western migration. A child with this parents in 1860, by 1870, he had moved to Collin County, Texas and was living with the Felker family, working  as farm labor.

One year later, Missouri Felker, 17 in the census, would become his wife in October of 1871.

James Wesley Griggs was not the only young man from the East Coast to travel west after the Civil War.

From the restlessness of youth, to the experience of traveling during the war, to the newer, quicker methods of travel with the spreading of railway lines, escaping the memories of war took many a young (and sometimes older) man far from home.

James Wesley Griggs first landed in Plano. He and Missouri mostly raised their children in Denton County, Texas. She would pass away, on February 21, 1892 in Hood, Cook County, Texas.

The turn of the century, in 1900, found him in Cook County, Texas, with only his youngest son, Israel, at home, but his younger half- brother, Charles Patterson Griggs had moved his family to Texas as well, and was living with James.

James still a restless spirit, moved to the colorfully named town of Willow Bar in Cimmaron County, Oklahoma, where he is found, alone, in 1910. However, in 1920, at age 71, he had opted for the convenience of city life, and  was living on East Fifth Street in Oklahoma City, Oklahoma, with his son, Israel, a Railway Engineer.

I can not give a reasaon the Griggs boys were placed with Rev. Samuel and Lucy Morton as infants, but I do know they were not living with their parents in 1850 and the Lewis and James Wesley who were incorrectly labled "Morton" in 1850 were not Mortons and were not the sons of a post-menopausal Lucy.

Posted by Jobs Children at 4:45 AM