Margaret Victoria Davis was the youngest daughter of Henry Davis, Job's oldest son, and his second wife, Martha Palmer. She was born on April 5, 1852 amidst the times of her father's greatest troubles. She was a preteen when her father passed away. Her mother passed away in 1879, after all of her children were grown.

Henry Davis's minimal estate papers reveal little of his passing and nothing of the fate of his widow and younger children. I am sure that somewhere in the scattered and digitized papers of that troubled and turbulent era of Stanly County history, a mention of a dower, guardianship, or something regarding this family must be there to find. It seems his younger brother, E. W. Davis, took the reigns and not so benevolently prevailed in the fate of his nieces and nephews. Henry's second oldest son, John Edward Davis, silently closed the door on his fathers legend, and clung tightly to the devoutly religious family he had married into, that of the Rev. Uriah Staton of Anson County.

Who did young Victoria go to live with? Perhaps it was that, for a while, of her oldest sister Sarah Francis "Sallie" Davis, who became the second wife of Woodson Davidson Alexander Crump on February 4, 1858, when Victoria was only 5 years old.

1850 Bill first appears in records with his parents and two little brothers in the census.

Margaret Victoria Davis married William Pines Crump, the oldest son of the above mentioned Woodson, and a stepson to her sister Sallie, about 1876, well into her twenties. Bill Crump, as he was known, was a young man with a troubled past. The following event took place in 1879, a few years after his marriage to Victoria, J. E. Howell referred to James Edward Howell, a cousin of his wife Victoria, son of Peter Howell, the oldest half-brother of her father Henry Davis. Bill and J. E. Howell had grown up in the same section of Anson County, the Cedar Hill section, just across the river from Stanly, where Victoria had grown up. I have not yet discovered what Jim Howell did to end up in jail, for his buddy Bill to want to break him out. 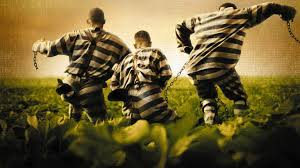 
1860 Victoria first appears in the census.

Victoria appears in one census with her family. Her brothers elsewhere, her oldest two sisters married, only Henry and wife Martha Palmer Davis and their two middle and two youngest daughters appear in the household.


Her husband lived at home until he was an adult, and thing were not at all harmonious. W. P., as he was most often known, would attempt to take his father's life. He was arrested, but there was never a trial. Oddly, Woodson must have stepped in and dropped charges, or some other reason prevented a trial, as William seems to have gone on with his life. His mental state seemed to be deteriorating early. Below is the link in the story of Sallie Davis Crump, Victoria's sister and Bill's stepmother.
A girl marrying her step-nephew would be considered incestuous today, but back then, marriages among cousins and step-relatives were common.

1880 The Families first census together. 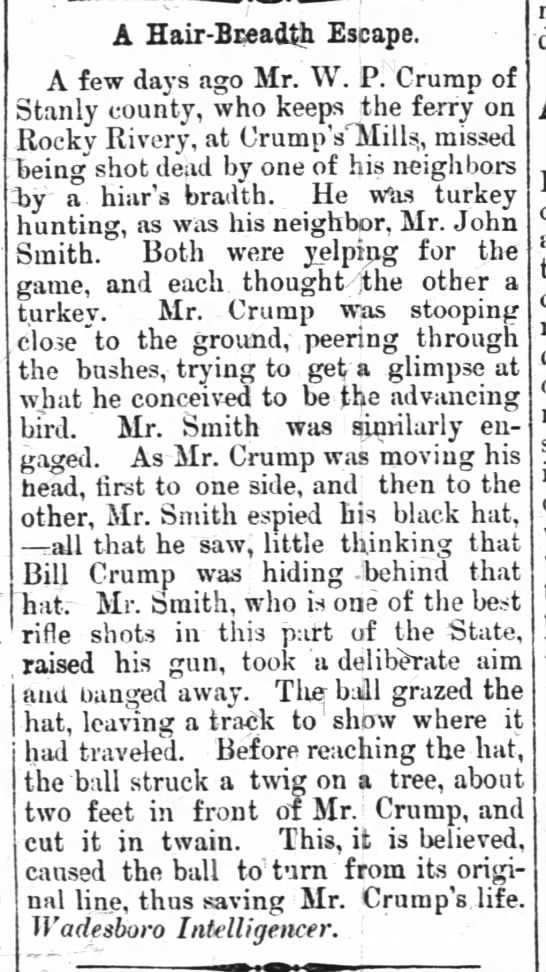 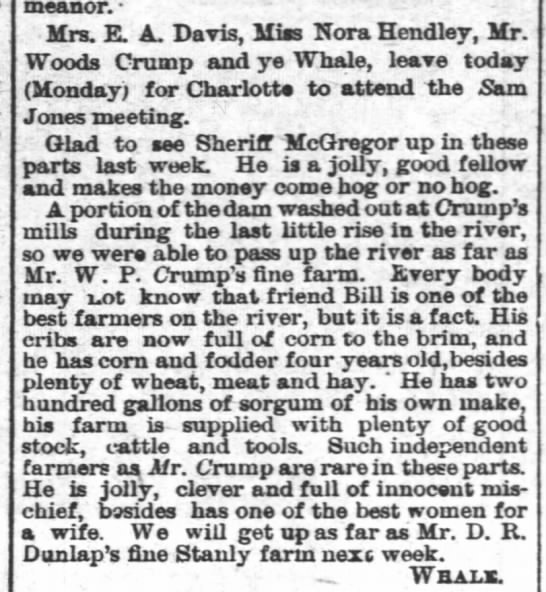 The Messenger and Intelligencer
(Wadesboro, North Carolina)1 May 1890, Thu • Page 3 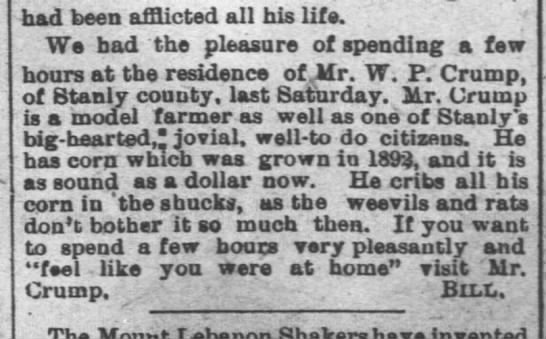 The Messenger and Intelligencer
(Wadesboro, North Carolina)30 Jan 1896, Thu • Page 3
1897  The Ferry Sinks
Below pictured is Bennett's Ferry which was down the way, and probably very similar in form to Crump's Ferry. 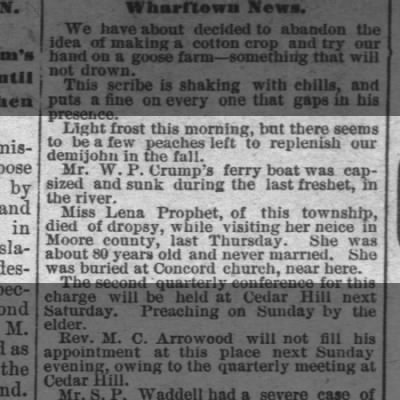 
1878 Bill and his family in the Ingram Suit as Heirs of Clementine Ingram Crump. 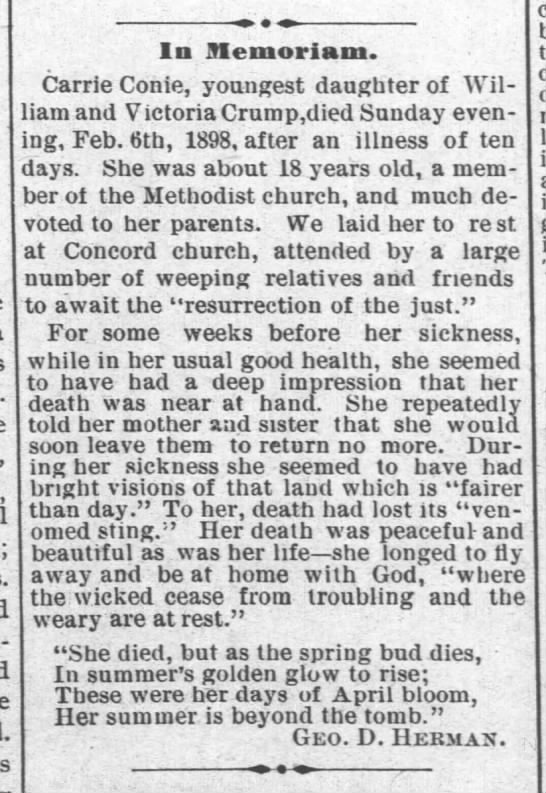 Bill's brother Joseph had a champion hog. A convict was lurking around the area. Steve Crump, Bill and Victoria's son who moved to Texas had married his second wife, reported to be a well-off widow. and Victoria was not feeling well.

1900 Victoria has surgery in Salisbury. 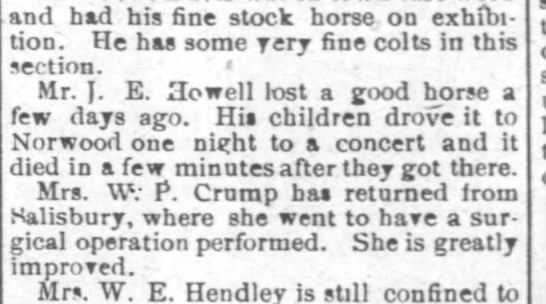 The Messenger and Intelligencer
(Wadesboro, North Carolina)24 May 1900, Thu • Page 2 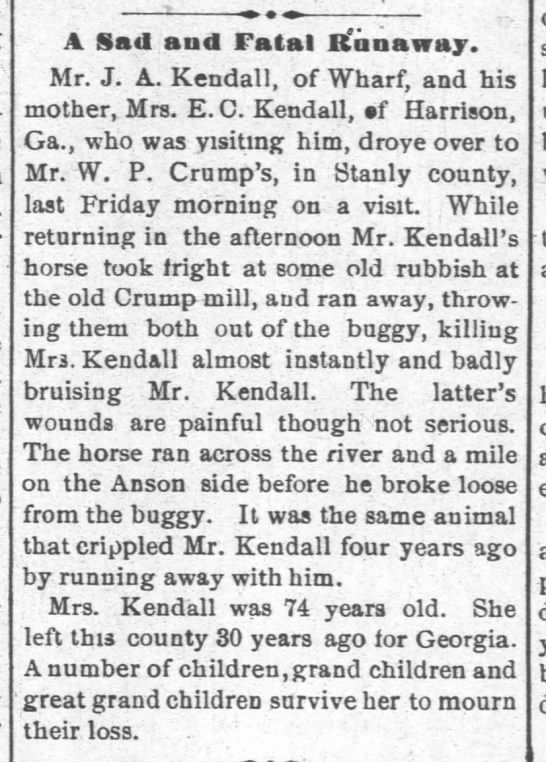 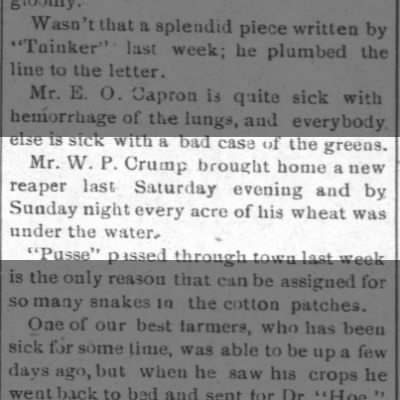 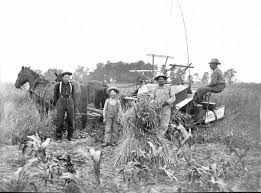 The Crumps lived on the side of the Rocky River and Bill operated a Ferry, and helped his father operate a Mill, while another Rocky River resident, J J Davis, also ran a mill. The ferry went between the community of Rocky River, on the Stanly County side, to Wharf, on the Anson Side. Wharf was located near the Concord Methodist Church in Anson County, in the area of Howell, Kendall and Woodall Roads. According to newspaper accounts, there was also a road in the town that led to the Old Davis Ford called "Forde" Road. On the Stanly County side, Rocky River was near Loop Road in the southernmost part of Stanly near the river. 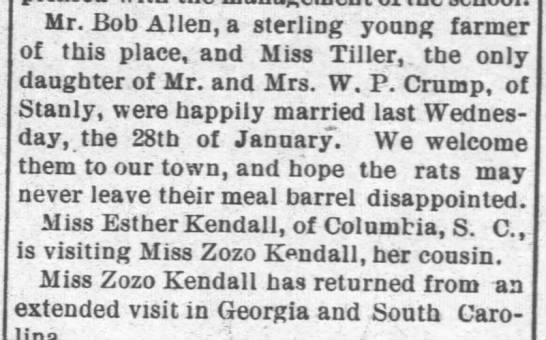 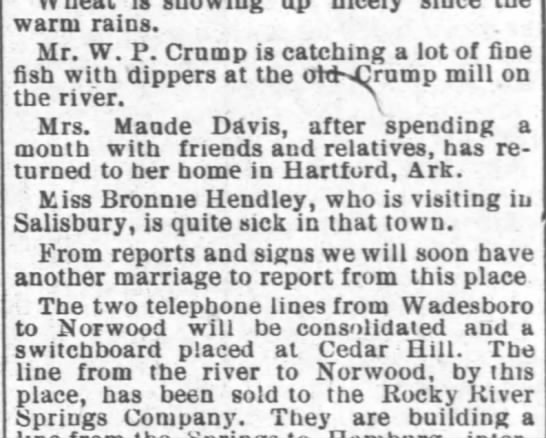 ...and I would like to know who Maude Davis from Arkansas was. It was obvious she was related to individuals in Wharftown, who inevitably, are almost all in my family tree. Which Davis family moved to Arkansas? 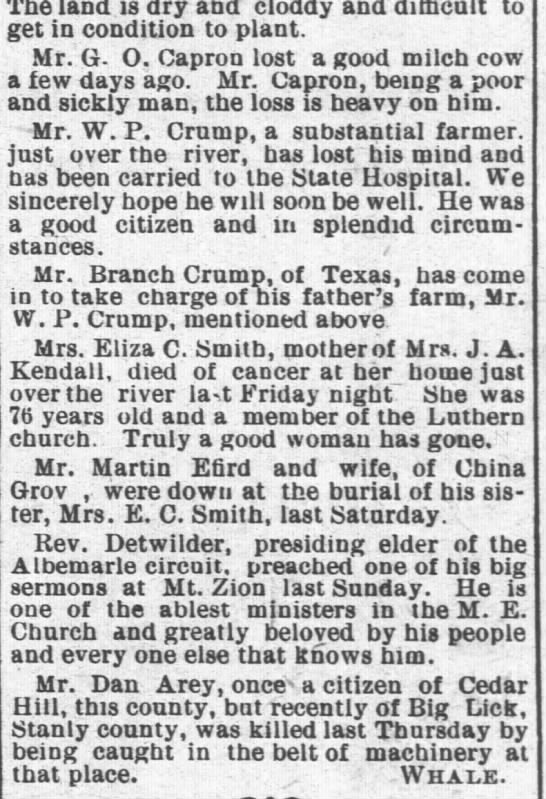 1900 Census, Branch Crump was living with his brother Stephen Henry Crump in Texas. In 1904, he came home to take care of his families farm.
June 1904 Bill is Back, Victoria is Sick
and son Branch has reunited with his wife. 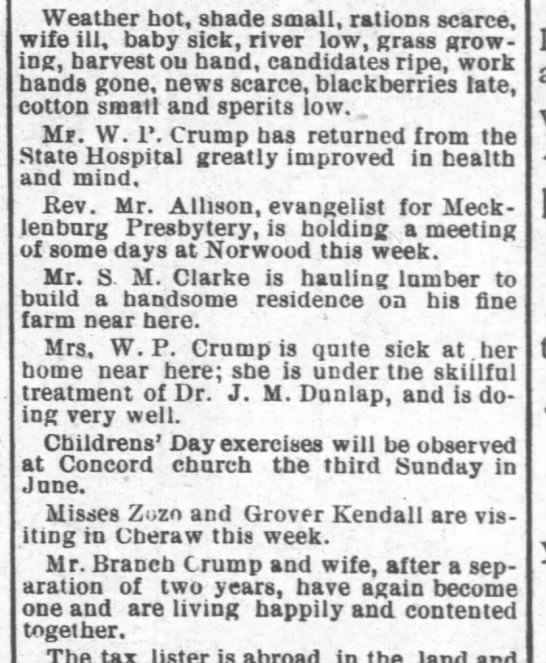 By 1905, Bill had been place in the mental hospital in Morganton, at Broughton, his property was being sold and his land rented, in an attempt to support his family. 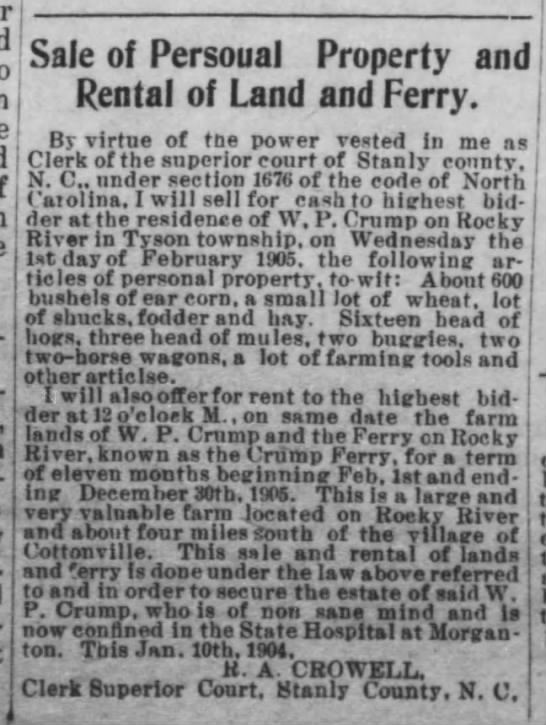 
Six years later, it was reported that Victoria went to visit Bill and he was able to talk, and wanted to come home. He was referred to as River Bill Crump, as opposed to his cousin, William F. Crump of Polkton. Fannie Howell referred to in the article, was the wife of James Edward Howell, whom Bill had busted out of jail in Wadesboro when they were younger. 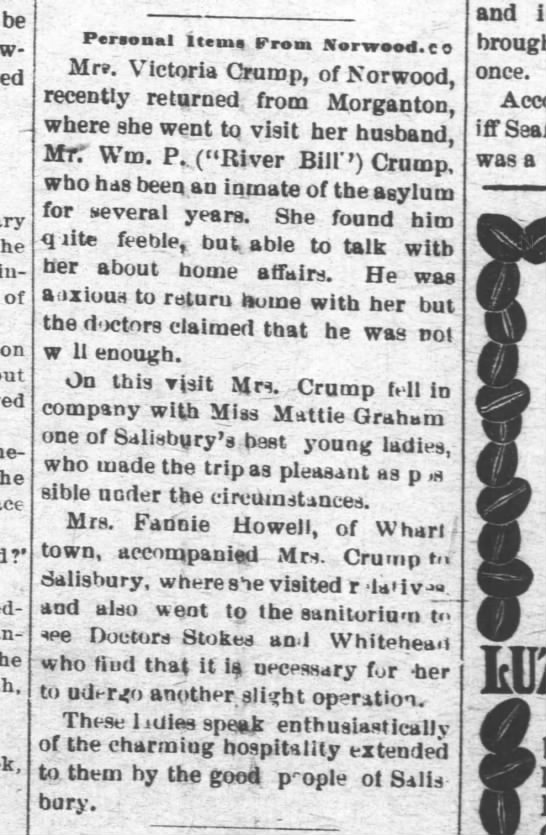 1917 The Crumps Large house on the Stanly side of the river burns down. 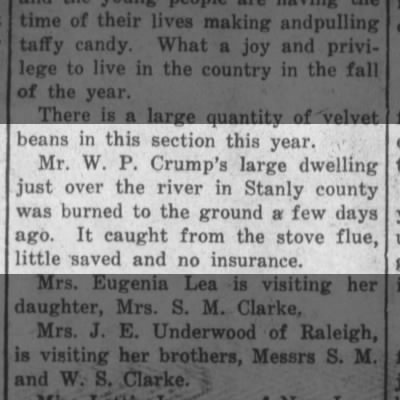 In 1920, the final sale of River Bill's property was taking place. It had caused a disagreement between William Branch Crump and his brother Atlas Erastus Crump.


Bills Legacy was over. Victoria passed away on September 28, 1934. The couple had 6 children:


Some of the Crump family remained in the area. The family of Steven H. Crump removed to Texas. Next is his story