Shipman Jones is an enigma. He appears in just a few records and even his "possible" decsendants are a mystery.

The appearance of Shipman Jones begins with the death of a more well-known gentleman in Olde Fayetteville, that of Jordan Howell.

Jordan Howell was my 6th Great Uncle. He was the son of Sarah Winfield and her first husband, Richard Howell. The couple had 4 children: Peter, Jordan, John W. and Charlotte. Jordan was named for his father's brother, and perhaps an even older relative. He was born about 1794 and he and his younger brother, John W. Howell removed from Anson/Stanly County to Cumberland, to the growing business and trade 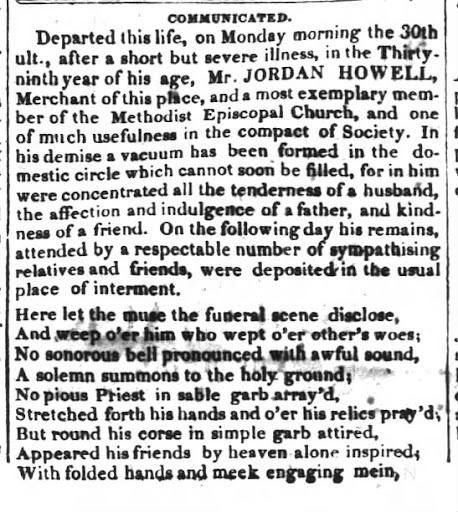 center of Cross Creek, now known as Fayetteville.  He died a still young, but well-established businessman and left a small family. He had married a widow, Mrs. Hannah Handy in 1820. Jordan is shown as a Junior, because his uncle, Jordan Howell, Sr., was still alive. The bondsman for this marriage was William B Hall and the witness, John Armstrong.

From all appearances, his two daughters, Clarissa and Charlotte, went to live with their Grandmother, Sarah Winfield Howell, because they married men near where their grandparents resided in Stanly County, and not men from the Fayetteville or Coastal area. His only son (to make it to adulthood), Jordan Lafayette Howell, remained as an apprentice to business partner, Paris Tillinghast, and later removed with Tillinghast to Columbus, Georgia.

His widow Hannah remained in Cumberland County and applied and recieved her dower. After the year had passed, she remarried, to the mysterious Shipman Jones. Bondsman was Thomas H Massey and witness, Archibald McLean, Jr.
Shipman Jones took advantage of his wife's inheritance and they sold the property for cash.
He is mention in one land record, and one record alone, that one involving the sale of Hannah's property to John W. Howell, brother of Jordan.

"Shipman Jones and wife to John W. Howell.....between Shipman Jones and Hannah Jones his wife, which Hannah being the widow of the late Jordan Howell of Fayetteville, North Carolina....for the sum of $50....south side of Hay Street near the foot of Hay Mount....Brick House....Lot # 4 in the deed from Redfield and Company from Petersburg, Va. , William Moore,trustee, to Able Turner...said Turner...date June 22 1824...conveyed to Jordan Howell and Job Davis as tenants in common...belonged to said Hannah and her present husband aforesaid or to them jointly. ....recorded by Robert Strange."

The marriage lasted no longer than 9 years, because on April 7,1845, Shipman Jones again appears in the marriage records, this time marrying Eliza Carroll. There were several Carroll families in Cumberland County and it is unknown which one Eliza belonged to. Bondsman and Witnesses for this marriage was Amasa Barnhill, D G McRae and J. McLaurin. 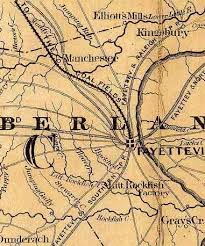 Having married in Cumberland County in 1836 and then again in 1845, one would think Shipman Jones would show up as the head of a household in 1840. There are plenty of Joneses in the 1840 census in Cumberland County, but Shipman is not one of them. Nor is he in any of the neighboring county, or in the 1840 census at all. This could mean one of 2 things, either he was not counted at all, which is very possible. He could have been in transit or on the sea, or just missed entirely. Or, he and Hannah could have been members of someone else's household.

It is most likely, however, that Hannah had passed away by 1845, as this is when Shipman Jones married Eliza Carroll.

Marrying in 1845, it would make sense that the couple would appear in the 1850 census, unless dead. Which Shipman Jones appears to have been before 1840, but not too long prior. He left no will or estate record. But appearing in the 1850 is Eliza Jones, widow, with three young boys, living with an "Agnesy" Carroll, maybe her mother.


In the 1860 census, Eliza is still living in a household with "Alge", and has given birth to 3 daughters, only son Billy (William H) is still in the household.

1870 was the last year that Eliza shows up in the census, this time with 3 of her 4 daughters. The family lived in Rockfish. Rockfish was located on the western border of Cumberland County, and now transfers over into Hoke County.

It was named for Rockfish Creek, which is a contributery to the Cape Fear River. While Eliza maintains the Jones name in 1850 and 1860, by 1870, she has reverted back to Carroll. Her children's marriage licenses ensure that this is the same Eliza and there is a bit of a twist to this family that sets them apart in this time and era.

While the older woman, "Algathy" and Eliza, are both counted as white in the census records, the children of Eliza Carroll Jones are not.

As you can see on the above map, Rockfish Creek from old Robeson County. This part of Robeson would become Hoke County. Robeson County is also known for one type of peoples, the Lumbee tribe.

While searching through Eliza Carroll Jones's neighborhood in the 1860 census, looking to see if her sons had been "bound out", as was the custom in those days for the children of widowed or unmarried mothers, I noticed an unusual thing about her neighborhood, something I had only saw in the 1850 census of  Wolf Pit in Richmond County, North Carolina. About half of the population of the area was labeled as "Mulatto". 
The 1850 and 1860 censuses were taken prior to the Civil War. Prior to the Civil War, most people of color were enslaved and were not listed in the census records with persons of European heritage. There were a few, "Free People of Color" listed here and there. Freed persons of African Heritage. There were also a number of true 'mulattoes', persons of mixed heritage who were born free. Some were former slaves freed by their owners. Others were persons born to previously freed mothers. Others were born to Caucasian mothers, but had fathers who were of color.

But these individuals were not great in number, and scattered. There were no large communities of them, simply a few random families.

In my previous research of WolfPit Township in Richmond County, a few years ago, wherein over half of the population were labeled as "Mulatto", I discovered that this group had been identified as "Croatan" Indians, who had came to the community to work in the turpentine industry. Census takers had no label for Native Americans at the time. Individuals were either Black or White, and those who did not fit in either of those, who appeared "Brown", where given the designation of Mulatto.

The Croatan are who we now know as "Lumbee Indians". They were discovered in the 1730's living along what is now known as the Lumber River, and was at that time called Drowning Creek. They were using English farming and building methods and some of the members of the tribe were of obvious Caucasian and Native American heritage, described as "Mixt" and having gray eyes or lighter than typical hair. Over time, this tribe fluidly intermarried with other members of the encroaching community, including both persons of European and African decent. One of the most well known Lumbee, Henry Berry Lowery, is said to have married a woman of African decent. The Lumbee are today referred to as "Triracial Isolates", or persons of multiple races who took up in various spots along the East Coast and Southeast, sharing many of the same surnames. In the 1860 census of Rockfish Township in Cumberland County, the following is a list of Eliza Carroll Jones's immediate neighbors.

And the pattern follows, including a 16 year old, Joseph Carroll, mulatto, working for a Mr. Evans, white, possibly her son "David Joseph" from the 1850 census, and one being his middle name.

This tells me, the real fathers of Eliza's children may have been Lumbee, and that Shipman Jones may not have died just prior to 1860, as the census might suggest on first glance, with a son being born in 1860, but may have divorced her, due to seeing that her children were obviously not his.

Another family I have been researching had such a thing happen. that of George Washington Nash, of upper Anson County. He was the son of Nancy Nash and Benjamin Hudson, of just across the Rocky River from Stanly County. He was married twice, the second and third times successfully, however, his first marraige, to a woman named Mary. He sued Mary for divorce in Stanly County Superior Court, as she had ran off with another man, and he also mentioned that she had given birth to a mulatto child not long after their marriage.

Eliza's children, when adults, named their prospective fathers in their own legal documents.

Her son William H. "Billy" Carroll, names his father as Ezekial Webb, Ezekial Webb appears as a free man of color, and married, in the 1850 and 1860 census records of Cumberland County.

1860
He had an older wife, Nancy, and at least 3 children. His son Weston R. G. Webb would move to New York as he grew up, and Ezekial, himself, would move to Raleigh.

The daughters of Eliza Carroll Jones name their father as Robert Mallet. Robert Mallet had likely been a slave. He does not appear in any census prior to the Civil War, but he does appear in the Freedman's Bank Records.

Eliza Carroll was the daughter (as far as I know) of Phillip Carroll and Algea Willis Carroll. Algea, was, I believe, the daughter of Algernon Willis, son of Benjamin Willis.

They were married in Cumberland County in 1823 and divorced in 1837, in Cumberland County. I am sure there is an interesting story behind the divorce of Phillilp and Algea. Perhaps Phillip was not Eliza's actual father. I am curious to find out the background on that. 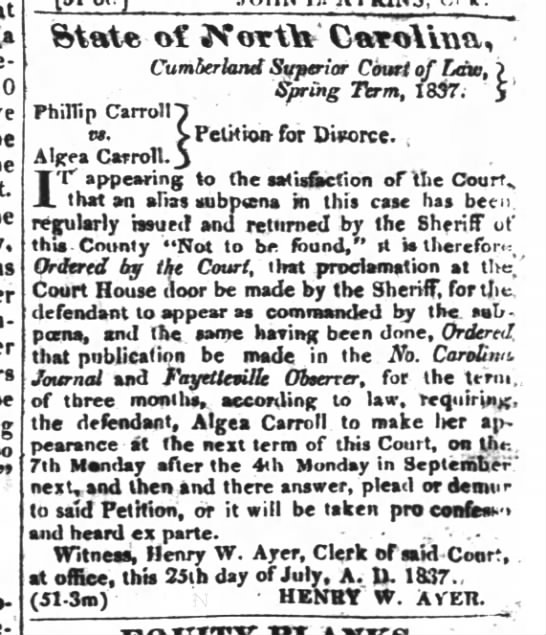 The Children of Eliza Carroll Jones were:

1869 -  Rhoda Carroll McAllister - proves to be the daughter of Mary by a Warren Carver, raised by Eliza as her own. Married James Floyd Young in 1891.

To prove my theory that the fathers of Eliza Carroll's children were probably members of the Croatan or Lumbee tribe, the death records of Rhoda Carroll McAllister Young's give her race as "Indian".