I'd always thought that Winfield Ford had eventually turned into Davis Ford, as Peter Winfield's daughter, Sarah married Job Davis, for whom Davis Ford was named, and her father Peter, and brother Edward, both or either, being the source of the name of Winfield's Ford.

However, I have now discovered that they were two different fords, several miles from each other. 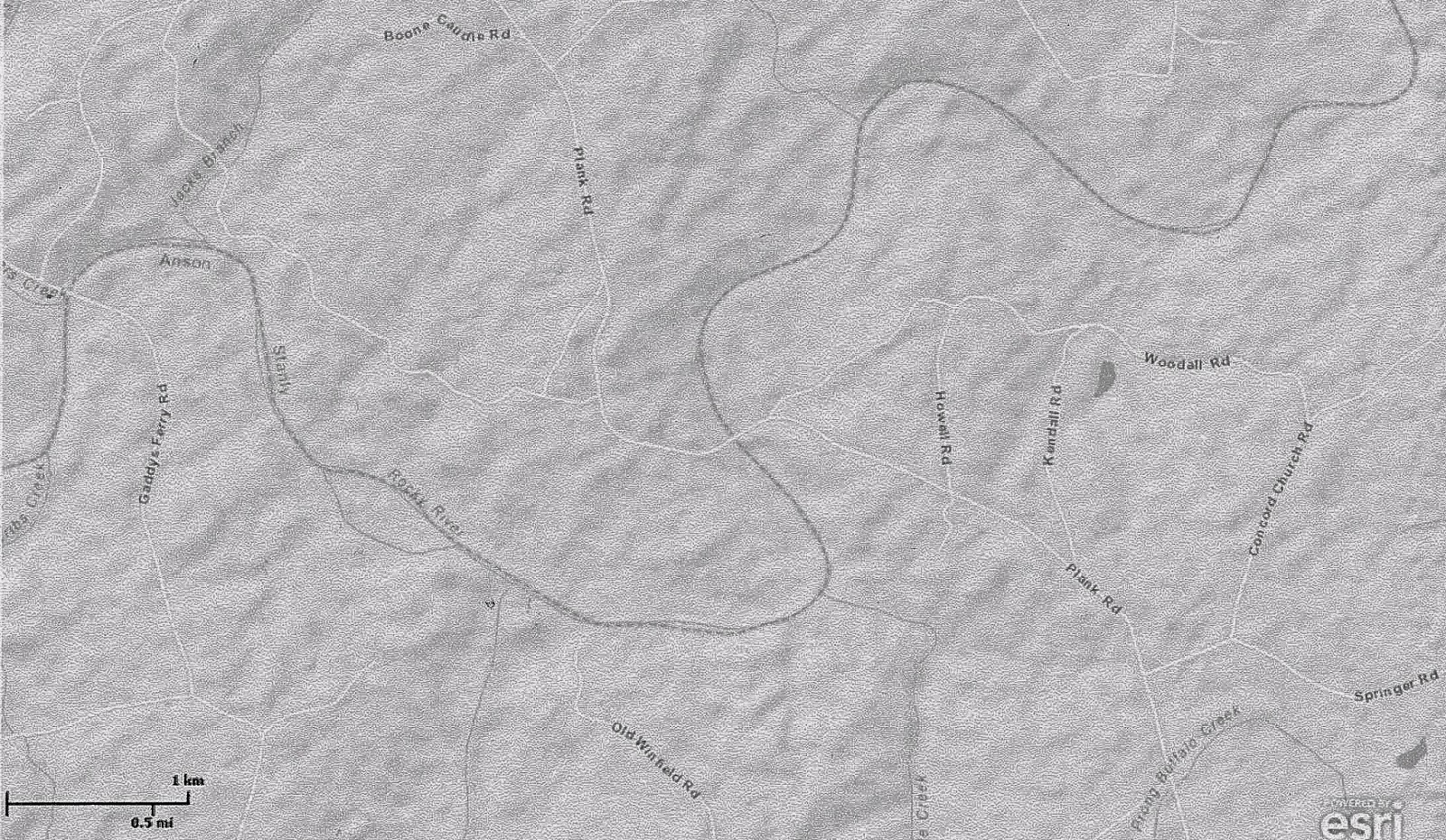 Davis Ford was located more in what is the sole of the "boot" of the Rocky River. Notice Old Winfield Road toward the bottom of the photo. The original Winfield Ford, I recently discovered, was north of where it says "Woodall Rd", due north of the intersection of Kendall Road and Woodall Road.

The North Carolina Highway Marker commemorating this battle, or skirmish, as some would call it, is located at the Hwy 52 crossing of the Rocky River between Anson and Stanly Counties. Sources state that the actual battle, and the more accurate location of Colson's mill, was at the fork of the Rocky and Yadkin/PeeDee River, which is now private property and no public roads lead down to it. In the times of the American Revolution, the juncture of these two rivers was an important spot for the two counties and also nearby Montgomery County, and businesses located there were an Ordinary, the Mill, a ferry, and a stagecoach relay, in addition to several homes and at least one, possibly two churches.

The following are excerpts from the site Carolana: Carolana: Colson's Mill

"In the year 1780 I think it was but I am not so sure of the correctness of this date as the other, I again volunteered under Captain McCurdy for a term of three months and continued under him for about two or three weeks, and was then transferred with a number of our company to the command of Captain Thomas Ray – and continued under his command until he with a detachment of his company were defeated by the Tories near Rocky River – which defeat being attributed to the bad conduct of Captain Ray – he resigned – and Matthew Stewart my father was made Captain in his stead, and under whom I completed the term of three months – this was also volunteer service as before stated.
Later, he repeats this story:
"I think this was in the summer of 1780 – Again I volunteered under Captain McCurdy for three months served part of the time under him – when Captain Ray was chosen to our command who after his defeat at or near Collson's Mills [sic, Colson's Mill] on account of dissatisfaction, resigned and my father Matthew Stewart took command in Ray's place – under whom I completed the full term of three months for which I volunteered under McCurdy."

In his 1832 pension application affadavit, William Boyd (R1094) asserts:
"I served 3 years & 9 months as Lieutenant in a company commanded by Captain Buckner Campbell [Kimbrell], I was in one considerable engagement with the Tories, at the Junction of Rocky & Pedee rivers; the Tories were commanded by Captains Fannon [sic, Colonel David Fanning], McGirt & Boston Satts. The result of the fight was 73 of the Tories were killed, (amongst those were the said Captain Boston Satts, on the part of the
American troops (or Whigs) 7 men were killed & 11 wounded. Colonel Ledbetter was commander of the troops on the day of the battle, Captain James Crump & Captain Buckner Campbell [Kimbrell] both commanded each of their own company on the day of the Battle; there were several other companies of North Carolina militia engaged in the battle, but the names of their officers I do not recollect; (this Battle was fought in Montgomery County State of North Carolina); the same services were rendered in the State of North Carolina."
Later, he repeats his story:
"...during this term he was in several engagements with the Tories. The first of which was in the forks of the Little Pedee and Rocky Rivers, in which engagement, 75 of the Tories were killed and among them was Boston Salts, a Tory Captain, and that, Lieutenant Colonel Drury Ledbetter commanded during the battle, and that there were 6 or 7 companies in the engagement, and that there were 5 men killed and 11 wounded in his company, and that he was slightly wounded in the thigh."

In his 1832 pension application affadavit, Richard C. Swearingen (S31402) asserts:
"The British had taken Charleston and the Tories got quite strong and formidable in the South, one Colonel Davidson & Captain Brevard was raising the men to fight and disperse the Tories, he again volunteered under them for the time of three months. He joined his officers at a place called the Long House on the Fork on the road between Rocky River & Salisbury North Carolina, they then marched on to a place called Colson's Mill in Anson County for the purpose of dislodging the Tories who were there encamped and were commanded by one Major Welch, an engagement took place between the Company under Davidson and Brevard and the Tories which lasted from about daybreak till something like 10 o'clock when the Tories were defeated & run off except those who were taken Prisoners who were some considerable number."

In a few books and articles written on the details of the Battle of Colson's, it is mentioned that the ford as was used as escape route, as it was just a few miles down the Rocky, the smaller of the two rivers, from the Mill, or "Colson's Old Field" as it was sometimes called. It makes since that Winfield Ford was on this section of the River, as it crosses into the section of land that Peter Winfield left to his daughter Jemima, and her husband Griffin Nash and the part that went to his daughter Sarah, and her first husband, Richard Howell, before he passed away and she married Job Davis. This portion was eventually given to her oldest son, Peter Howell, who as an adult, would make purchases of other portions until he had recouped a good section of his grandfather's original grant and purchase from Hugh Ross. The Winfields had came down from Virginia aproximately the same time as Drury Ledbetter, who served during the Battle, along with their relatives the Freemans and the Robertsons. Peter Winfield's wife Charlotte, was the daughter of Arthur Freeman. Her sister Keziah Freeman Meanly and husband Richard Meanly, and brothers Joel and Henry Freeman, were some of the persons who had migrated with Peter and Charlotte and their four children, Edward, Sarah, Jemima and Ancena.

I wonder if any of them witnessed the battle?

Posted by Jobs Children at 3:03 PM