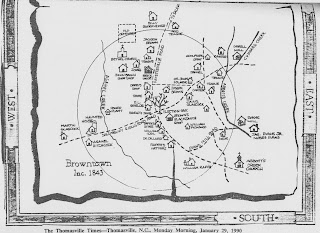 Browntown, in Davidson County, North Carolina, is now considered a Ghost Town. The above map from the Thomasville Times, shows the roads that led to and from Browntown, and the names and location of the homes of some of its citizens...and most of its citizens were named, most unusually, Brown.

By the 1760's, Davidson County had 6 small communities that had grown up in mostly the northern section, and were by and large, mostly German settlers springing off the German Moravian Settlements around Salem and Forsyth County, and church groups coming from the north.

Browntown was settled a little later in what was known as the Abbott's Creek Township. It is said that at one time, Browntown rivaled Salisbury and Charlotte in population and industry. It was situated on an old road that led from Salisbury to  Guilford  Courthouse, now known as Greensboro, where a 1781 Revolutionary War Battle was fought. The town of Browntown was known for its craftsmen and artisans.
When it was incorporated in 1843, it was more than twice the size of Lexington, and Thomasville had not yet been incorporated. 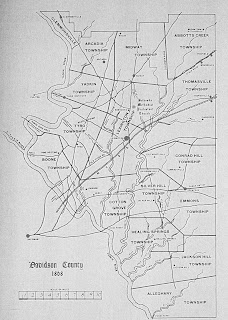 While researching the Howell's, some of whom married into families in Davidson County, I discovered that they had also married into and with the Brown family. Most of the Howell's and who they married were some farmers, but also physicians and merchants. During most of the 19th century, Browntown was grace with 6 doctors. Dr. Allen Newsome, originally from the southern part of Davidson County, practiced there, after resigning as postmaster of Jackson Hill. Dr. Newsome was a gifted and versatile man. He not only was a planter, a physician, and post master, he was also a merchant, a minister and a constable during the course of his lifetime. More on him later, but he married Charlotte Howell, from Fayetteville, North Carolina. Her father Jordan Howell was also a merchant and when he had died in 1836, Charlotte and her younger sister Clarissa had returned to live with their grandparents, Sarah Winfield Davis (widow of Richard Howell, father of Jordan) and Job Davis, in Stanly County, North Carolina.

Browntown was known for it's cabinet makers and for creating elaborate tombstones still seen throughout the area.

Currently, the only things left of Browntown is an old cemetery and a short road called Browntown Lane. It is near an old Abbotts Creek Primitive Baptist Church. It is said that the remains of an old Hat Shop are still there. In the earlier part of the century, farmers did not respect gravesites and a farmer took down the gravestones and plowed over the residents of Browntown and planted grain. In more recent years, efforts were made to locate the cemetery and mark it off and preserve it for future generations and research.

An old record mentioned a 'school' of cabintry in Browntown and the artwork and tombstones that remain show a strong German influence.

Browntown, just one of many communities that faded away. When a plank road was built south of it that  Bypassed the town, then the railroad also missed it, Browntown died out. While the land is still owned and a few people live around the area, the town and nearly all trace of it have disappeared.

Posted by Jobs Children at 4:11 AM