Revelation in the Papers: The Estate of John C Starnes. 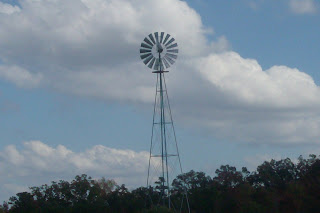 The estate papers of John C. Starnes, of Stanly and Cabarrus Counties, North Carolina is a thick bundle of papers that came in three parts. The first part is the list of personal property belonging to John C Starnes by the administrators of his estate, his brother Nathan Monroe Starnes (N. M. Starnes) and A. Eudy, of whose connection to the family I do not know.

The second part is the Final Settlement of the Estate of John C. Starnes and the setting off of a dower for his widow, Abigail D. Furr Starnes. 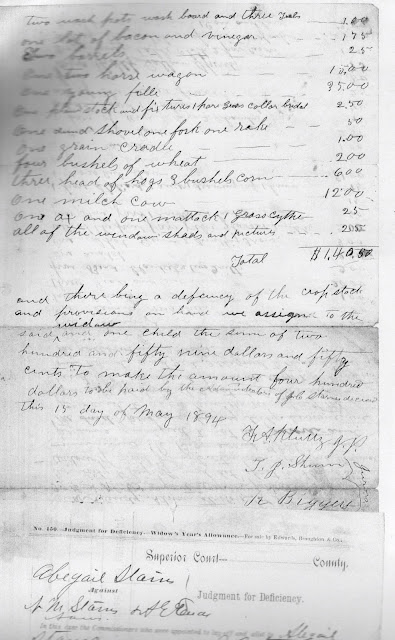 The the third part of the Estate papers concerns the lawsuit that the widow, Abigail D. Furr Starnes, filed against the heirs-at-law of the estate of her deceased husband, which turned out to be his surviving brothers and sisters and the children of two of his deceased sisters. 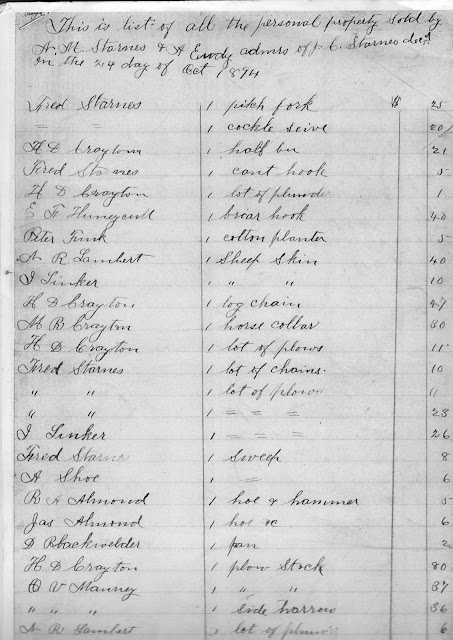 For me, the most amazing truth brought to light from these documents was the mention of a child. The child is not named in the documents and I had never seen a child listed in any of the censuses with John C Starnes and Abigail, that was thiers.


The 1870 census, the first one taken after their marriage lists a young Adam Shoe in their home. As an Archibald Shoe is also listed in the home of John's father when they were children, it is easy to guess that the Shoe's were perhaps the orphaned children of a neighbor or even a relative. Adam appears to be the son of a Tobias Shoe and Rilla Garmon Shoe who lived in Stanly County. As Tobias is shown dying in 1862, the likelihood he died in the Civil War, either in battle or of illness, is great.

In 1880, a teenaged Daniel Starnes is living with the couple. He is not listed as a son, but a servant. He was probably a distant or not so distant relative.

By 1900, John has passed away,  and so has Mary Byram Starnes and the widower, Frederick Fincher Starnes, has married his cousins' widow, Abigail. The 23 year old F. L. Starnes is Frederick's son, Frederick Lafayette Starnes. Samuel L and 'Walas Mc Stearnes' are designated as grandson's of the head-of-house in the census. These young men turn out to be Samuel Lemmonds, son of Margaret Leavy Starnes Lemmonds, and William Mack Linker, son of Sarah Alice Starnes Linker, and Frederick Fincher Starnes's grandsons. The original census document did not specify surnames for the boys, so the transcriber assumed they were Starnes'. Census records have to be analyzed and researched carefully. They are loaded with errors.

In 1860, a 2 year old John Starnes is enumerated in the family.  His tombstone is located in the Stallings Cemetary on the Stanly, Cabarrus County line. This is another sign that the family lived on the line, sometimes being counted in one county, sometimes in another, other times in both, without having actually moved. This cemetary is accessible by way of Smith Lake Road between Barrier Store Road and Cox Road.

Albert and Frances Owens were a married couple that were employed as servants. A 15 year old 'Brady' Starnes is also listed in this census as a servant. She was actually Beadie Ann Starnes, daughter of Rufus Starnes and would become the future wife of Frederick L Starnes, F. Fincher Starnes son, who is listed just above her.

Yet, there is the child of Abigail listed in the estate papers of her first husband, John C Starnes. Who was this child? He or she was not yet born in 1880, as a child does not show up in that census. This child was evidentally alive in 1894, but did he or she die before the 1900 census? Or was he or she out on their own by 1900? If the birth was shortly after the census, this certainly could have been the case 20 years later, especially in this time period.
The 1900 and 1910 census, which enumerated how many children a mother had had and how many were still living, both lists Abbie for 0 and 0.  Yet, her first husbands estate papers clearly lists a widow and one child in several places. Why is the name of this child not given? Why would his surviving siblings, and nieces and nephews, children of his non-surviving siblings, inherit his property and possessions ahead of his wife and child?

If John had married prior to his marriage to Abigail and had a child by that marriage, he or she would have been an adult by John's death and should have been named in the estate papers.

So, another mystery to solve. Who was this child of Abigail and John? Did he or she live to adulthood? And where is this person buried?

Wills of Frederick and Abigail have been ordered. It is now just a waiting game.

Posted by Jobs Children at 6:53 AM