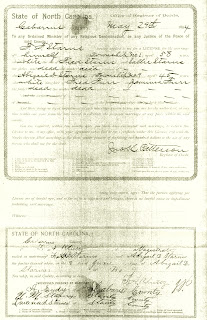 Abigail D Furr was the daughter of  Frederick Furr and Cristine "Crissy" Miriam Furr of Cabarrus County, North Carolina. She was born in August of 1844, one of those privileged young ladies to have experienced life on a large farm in the rolling hills of Carolina prior to the Civil War. She was the oldest girl and had 5 younger sisters, Mandy, Elizabeth, Martha Jane, Rosa and Bebie Loudemie and two younger brothers, Paul and Charles.

At the age of 20, she married John C Starnes who lived near present day Locust, North Carolina, just across the county line in Stanly County. She had grown up along the border of Stanly and Cabarrus. Some years later her little sister Elizabeth would marry John's younger brother Nathan Monroe Starnes.

In John's estate papers, a child is mentioned, but never shows up in any other records, so if Abbie ever bore a child, he or she did not live long. Later census records would record her as never having had a child.

John C Starnes died in May of 1894. His cousin F. F. Starnes purchased many of the items at auction. His wife Mary had passed in March, just two month prior and just two months later, F. F. and Abby would be married. 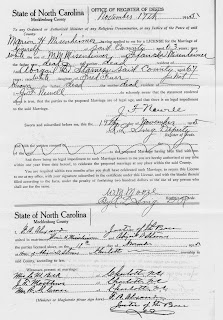 F. F. Starnes had been taxed for 4 large parcels of land in Cabarrus county, one being his father's old homestead, and for Machinery in a mill he operated in another township in lower Cabarrus County. Soon, he would begin to sell off certain parcels and business interests and relocate to the growing city of Charlotte in Mecklenburg County, where he would purchase 4 homes, 2 on Sunnyside Drive and 2 on Arlington Avenue.

After F. F. Starnes died, Abby, who was 18 years younger, would move closer to the trolley on Arlington and remained a widow for two years before marrying again in her 60's, a slightly younger gentleman, Marion Harrison Misenheimer, who was also from her section of Cabarrus County. They would remain in Charlotte.

Abbie outlived her third husband as Marion died in 1923 and Abbie not until 1925. She left her property to her surving sisters, nieces, nephews and a few caring neighbors.

Posted by Jobs Children at 3:05 AM