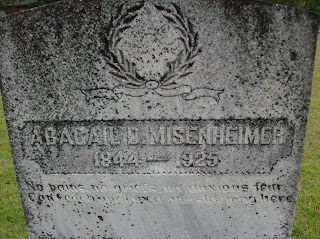 Abigail D Furr Starnes Starnes Misenheimer was born in August of 1844 to Frederick Furr and Crissie Little Furr of the Rocky River section of  Cabarrus County.  At the age of 20, on August 7 of 1864, she would marry John C Starnes in Stanly County, just across the county line. He lived near the area  now referred to as Locust, North Carolina, on the westernmost border of Stanly County with Cabarrus. John was a Civil War soldier and they were married just a month before Sherman burned Atlanta. The circumstances of John's ability to return home and marry his bride are unknown. Perhaps he was severely injured.
John and Abbie are never shown listed in a census with any children of their own. In the 1870 census, they are shown with 14 year old Adam Shoe in their home, an aparent orphan. Adam was the son of Tobias Shoe, a Civil War Soldier who died during the war. Perhaps he was hired to assist a wounded John.

In the 1880, a 17 year old Daniel Starnes is shown in their home with the relationship 'servant'. He was most likely a relative, a nephew or cousin, hired to give assistance to John. John died on May 2, 1894 and Abbie married his cousin, Frederick Fincher Starnes on  June 2, 1894, exactly two months later. That may have been exact protocol for a grieving widow.


In John's estate papers, a 'widow and one child' are mentioned. Nowhere else does a child of John and Abbie show up. By 1894, Abbie is 49 years old. As there was no 1890 census, it was mostly destroyed by fire, the child would have had to be born after the 1880 census, and could have been a young teenager by 1894. As of yet, I have not found a grave for a young Starnes buried near any of the other family members that could be the child of John and Abby. The two young girls buried near Abby, John and F. F. Starnes and his brother N. M. Starnes are the daughters of Nathan Monroe Starnes and his wife Elizabeth, who was Abbie's younger sister. In the 1900 and 1910 censuses, which lists the number of children a woman has had and also the number of those children still living, Abbie is listed as 0 and 0. None born. None Living. 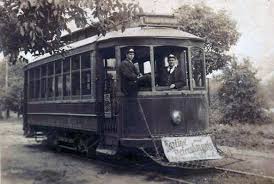 Frederick Fincher Starnes and Abbie had moved to Charlotte, NC to retire, and living first in the Piedmont Park section, near the Elizabeth community, and then she later moved to some property closer to the trolley system, on Arlington in Ward 6, that F. F. had purchased at some point. So, her will was probated in Mecklenburg County, North Carolina, on March 13, 1925.  It had been recorded on October 17, 1924. After the death of F. F. Starnes in 1913, Abigail remained single for 3 years, then later married someone she may have known from her childhood in Cabarrus County, Marion Harrison Misenheimer, whose family had lived close to the Furrs. Although Marion Misenheimer was 9 years her junior, she would outlive him by two years and in 1923, Abigail became a widow for the third and final time. 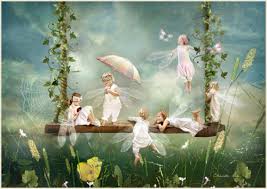 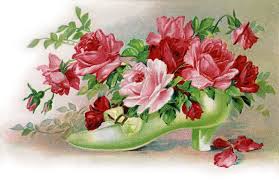 Posted by Jobs Children at 7:05 AM