In archaeology, is is not always possible to identify bone fragments. The fragments of a leg bone, a jaw with teeth, portions of a broken skull, what can these pieces, without the rest of the skeleton, tell us about an individual, a group, or an event?

Genealogy is akin to finding bone fragments and trying to put them together in such a fashion as to aid in imagining an individual, a family, in the way they were. African American genealogy is more difficult than most. Even after emancipation, finding records of a family's history, an individuals existence, even, is liking digging up bone fragments and trying to make sense of them. While some families were missed in certain censuses, black families were missed more often. Marriages were more often not recorded, and the same goes for deaths. Cemeteries were less likely to be maintained, graves less likely to have been marked. Families were more likely to be shattered and scattered. Fathers, and sometimes mothers too, sometimes had to work more than a walking distance from where they lived, so did not live with the rest of the family. And while all families, especially poor families, suffered the loss of little children from now preventible diseases and sometimes accidents due to parents working in the fields and children being unattended or underattended (a 7 year old minding the baby and it was eaten by a wild hog...I'm serious), black families lost them even more disproportionately. While a white family of 12 children were lucky if 75 percent of them made it to adulthood, black families were lucky if 25 percent of them made it to adulthood. Life was hard for all, but harder for people of color. I say this not from any source or material, but from my own personal experience of just trying to research them. 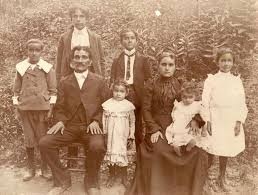 In Davidson County, North Carolina there exists a most unusual Family Bible. The Bible was the possession of Neil Nicholson McQueen,who was born in 1848 and who died in 1910. Neil was the youngest of the 9 children of Alexander Marcus "Sandy" McQueen and his wife, Sarah Batten McQueen. Neil was somewhat removed from the rest of the family. He was 25 years younger than his oldest brother and a full 8 years behind the next to the youngest in the family, Sarah Ann. Neil was a menopause baby, an afterthought. He was not a grandchild, as some of these much younger tag-a-longs tended to be. Sandy and Sarah were his parents, they were 49 and 41 when he was born, not so unusual.

In his family Bible, Neil had recorded the arrival of  his Scottish ancestors to America, the births and deaths of his siblings, and the typical family records that were kept in Bibles, a permanent record, in those days. What made Neil's Bible so unusual, is he recorded his whole family in the Bible.

My last post was on the father of Neil McQueen in a post called "The Sins of Sandy McQueen". You can find it here:

The reader may have read it and asked, "What sins?", as Sandy seemed to live a typical 19th century life as a Scottish-American having arrived to North Carolina as a child.  Sandy got drunk a few times and was kicked out of the Baptist Church he had joined. Other than that fraility, he seemed so typical, and he was.

His death was recorded in the Presbyterian Church, at Macedonia. 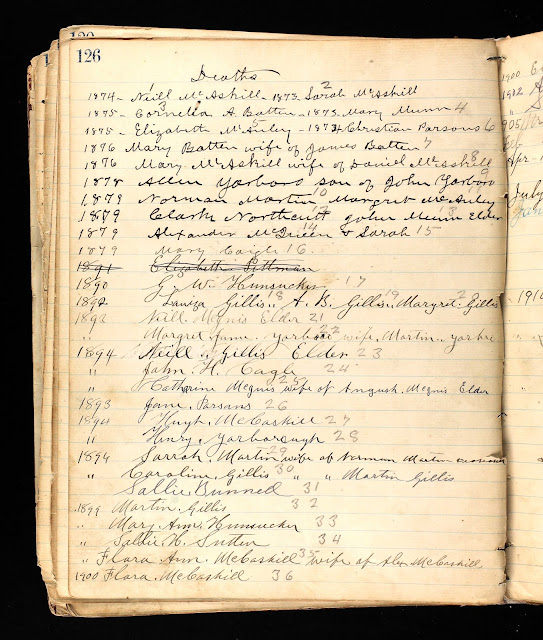 But other than that, Sandy appeared to be a steadfast family man. But it depends on what you mean by steadfast.

The orignal copy of the Family Bible of Neil N. McQueen is in the possession of Lee and Kenneth Koontz of Lexington. There's a list of family records compiled by Linda Hendrick Smith in 2001.

In the Bible is recorded the names and statistical dates of the children of Sandy and Sarah Batten McQueen:

Daniel Nichelson McQueen was born 2 February 1828 in Montgomery County and died about 1878 in Arkansas.

John Murdock McQueen was born 11 January 1832 in Montgomery County and died in (unknown year) in the Beaverdam Community of Richmond County, NC

William Butler McQueen was born 5 October 1837 in Montgomery County, and died about 1906 in Drew County, Arkansas.

Neill Nickelson McQueen was born 3 November 1848 in Montgomery County and died on March 13, 1910 in same.

The unusual part of the Bible is that Neill had also recorded the birth of his half-siblings, 12 mulatto chldren that his father had with 3 women of African decent, before and after the Civil War, women his father had held in slavery and some he had maintained a relationship with, and had impregnated after emancipation. This is one of those facts you can only confront as "it is what it is".  All we can do in our current atmosphere, our present theater, is to speculate and our speculation can only derive from our own mindset, and not theirs. We must simply accept fact as fact. Below is the other list of the "lost" children of Alexander Marcus McQueen:


Children with Lea McQueen (notice Lea is the only one whose last name, McQueen, is noted)


Note: Lea's children are the only ones given a last name, and the spelling was changed from McQueen to McQuean. Why was this? Was this to give them a unique name of their own, or to distance one branch of the family from another? Also, Alex McQuean is the only one whose death is noted at all.


I've looked through many a Family Bible and never encountered one wherein a man listed all of his father's illegitimate children, never-the-less one wherein the children of former slaves had been entered with the father being their former slave master.The closest I've seen are plantation journals sometimes kept by the lady of the house, the Mistress, if not the Master, which kept track of the births and deaths of the enslaved people much in the way of the registrar of a municipality. But, never in a Family Bible.


I wondered, who were these people and what happed to them.

The first group was fairly easy. In 1870, the following family was still living with Sandy and Sally McQueen.  "Lends" was 30. In other places, she is seen as Linda. "Mande" is really Hannah if you look at the actual document, and she is 17. "Betsa" is Betsy and she is 4 and "Reed" really says "Bud" and he is 2.

Abe, Betsy and Cranford are living with "Lea" McQueen. Right above them is Neil McQueen, who kept the bible, their half-brother and below them is the family of Alexander Butler, his wife, Hannah and an 8 month old baby girl called "M. B.", listed as his step-daughter.

Recall the list in the Bible for Lea was Hannah 1861, Abe 1864, Bet 1868, Alex 1870 and Cranford 1871. So Lea's last child with Sandy McQueen was born after that 1870 census. Alex, or Bud, died as a child, so this is the complete list for her, Abe, Bet and Cranford are living with Lea, next door to Neil McQueen's family and right next to them is the newly married Hannah McQueen Butler, Lea's oldest daugther.


And I discovered who the baby named "M. B." was, their daughter Mary Bell Butler Davis. The step-daughter title may have been incorrect. The above is from the death certificate of Mary Bell.


Then we have this family grouping:


Now, the above enumeration was done in Troy Township on June 5, 1880 by B. F Simmons.
Bet and Cranford are listed as the stepchildren of Gilbert Green, head of household.

The previous 1880 enuneration was conducted just 3 days later on June 8, 1880 in Cheeks Creek Township by Calvin Crunch. That's what it looks like, anyway, Calvin Crunch.

In that one, Abe,  Bet and Cranford are living with Lea McQueen and listed as her sons and daughter and she is living next to Hannah and Neil. Abe only appears once in this census, but both Bet and Cranford appear twice at vastly different ages. They're not just one off its 12 and 9, which match the birth years in the Bible, compared to 17 and 16. Captain Crunch was way off on that one.


Now, we do have this fact and document to add in:


So which mother belonged to which set of children? I have to look closer into the children for clues.

We've already seen that Hannah McQueen married Alex Butler and on her marriage certificate her mother was listed as "Lee". But the witnesses to the wedding were Neil McQueen (white and youngest son of Sandy McQueen with his wife Sarah Batten McQueen), Hamp McQueen (mixed race and son of Sandy McQueen and "Len" in the Family Bible, and Len McQueen, herself.

Abe has an interesting story and I will give him his own post. He was living still with his father, Sandy McQueen, in 1870 and with Lea, Bet and Cranford in 1880. He was married at least twice, but none of his documents clarify who his mother was.

Betsy or Bet appears in the same households as Abe in 1870 and 1880. I've not yet found anymore mention of her. She may have married after 1880 and changed her name.

Cranford married Cherry Butler. His mother is listed as "Len" on his marriage certificate.

Jerry McQueen was perhaps the most prolific and well- documented of the "bone fragment" children of Alexander McQueen. He was married at least 3 times and fathered a great number of children. He also lived long enough to recieve a death certificate and he lived near to the same area he was born for his entire life.

In both his marriage certificates and his death certificates his mother is listed as "Lindy".
His wives were Mariah Morrison, daughter of Harriett James (who might have been a widow), Clarise McCaskill and Mary Jane Ward.

The documents of the second son, George McQueen is of no help. He was married a few times, but the names of his parents were totally omitted. He died in 1910, so no help there either.

Mariah McQueen married Robert Green, the son of Gilbert Green (who would marry 'Linda" McQueen). On her marriage certificate, her mother's name is 'Len'.


Hampton McQueen, born in 1857, married Odelia Blue (and perhaps Hannah McCollum, too, but probably in just a 'relationship' with her), also identified his mother as "Lindy".


The youngest child listed in the Bible under "Len" was Jacob McQueen. He also lists his mother as "Lendy". 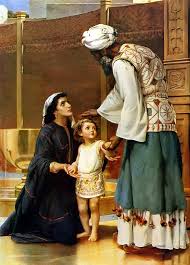 As for the woman, Hannah, in the Bible as the mother of Smithe, Sugoch and Emely, there are several women named Hannah in the 1870 and 1880 census records of Montgomery County of the proper age and race to be Hannah, but none named McQueen. I also find no record of her children, but it's also important to note that no last name is given for them, unlike the children of Len (Lindy).

I was able to trace of few of the lost children of Sandy McQueen and will tell of them in further posts.

Neil McQueen was indeed, an unusual man. He not only recorded his white, full siblings in his family bible, but also recognized his half-siblings, the dozen children his father sired with 3 enslaved women, before and after emancipation.