This is a photo of the Walter Jonah and Wincy Ann Mauldin family of Stanly County, North Carolina. From left to right, the individuals are Grover Littleton Mauldin, Walter Lee Mauldin, father Walter Jonah Mauldin, the little girl in front is Annie Maude Mauldin, the taller girl in back in Bertha Mae Mauldin. Seated is the  mother of the family, Wincie Ann Mauldin holding Riller Estelle Mauldin, who would not live to see two years of age. The boy to her right is James Fred Mauldin and the girl standing to the far right is Ethel Pearl Mauldin.

This photo was made about 1914 and 3 more children would be born. But Bertha Mae Mauldin was not one of the the children of Jonah and Wincy. They are my Great-Grandparents and the little girl between them was my grandmother. I was told the girl in the back, Bertha was an orphan girl that they took in. But she was more than that. She was a cousin, and a niece of Walter Jonah Mauldin.

And her nickname was Scrappy. 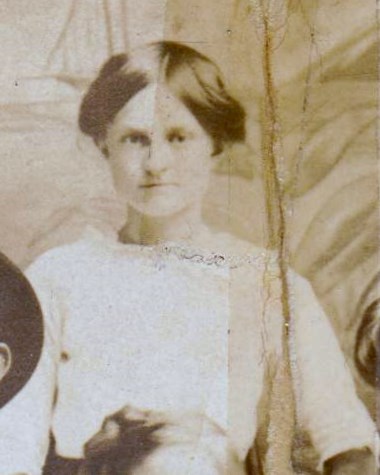 I don't know how Bertha Mae got the nickname of Scrappie, but she earned it at a very early age. She certainly looked enough like the family to be mistaken for one of the children, having the same nose as her Uncle Jonah and the same deep-set eyes that ran in the family. Jonah and Wincy themselves were both Mauldins. They were first cousins as well as a married couple. Their fathers Frank and Duncan were brothers.

In her first census, she shows up as "Scrappy" but the transcribers did not know what to make of it.

In this census, Scrappy and Willie Alice Mauldin are both listed as granddaughters of James (Duncan) Mauldin and Margaret Wincy (Solomon) Mauldin. "Tine" Mauldin, age given as 28 in this census, was Scrappy's mother and Mary Louise, given as age 24 in this census was Willie's mother.

A search of the bastardy bonds from the 1890's of Stanly County revealed nothing for the Mauldin sisters. The fathers of Scrappy and Willie remain forever a mystery. On their marriage licenses, Scrappy listed Tine Mauldin as her mother and Duncan Mauldin as her father, referring to the man who raised her in her early years, her grandfather, James Duncan Mauldin. Willie Alice, at her marriage to William Cephus Kimmer, only listed her mother, Mary Mauldin, and no father.

Duncan and Margaret passed away within a short time of each other in 1909. In the 1910 census, the two yet unmarried sisters are living together on Efird Street in Albemarle, with their two daughters, and a boarder named John Thompson.  The certain identity of John Thompson is unknown. It was a pretty common name around the area. All we know is that he was born around 1869 in North Carolina and worked in the local Cotton Mills.

The census records gave a little additional information in certain years. For instance, in the 1900 census, we find that the family were living in Center Township, which was near Norwood, in the southern part of Stanly County, and that father James Duncan Mauldin was a farmer. Both he and his wife Margaret could read and write, and so could their only son, Walter Jonah Mauldin, but none of the daughters, Tine, Mary or Minnie, could. From what I have seen in these old records, over and over, education before the Civil War, was much better than the educational opportunities after the Civil War.

Another  item of interest in the 1900 census was that Margaret was recorded as being the mother of 7 children, with 6 of them living. That means one of them had passed away by 1900. I only know of Nettie, Tine, Mary, Jonah and Minnie. So, who was the 6th one living in 1900 and who was the one who died?


The 1910 census also gives us a few views of how these girls were living. The single daughters of J. D. Mauldin had moved from Center and off the farm to the growing village of Albemarle and had went to work in the Cotton Mills.


Mary was shown as staying at home and taking care of the house. Her older sister, Rosey or "Tine" is listed as a winder hand. Their young daughters, Scrappy and Willie Alice were working as spinners at only 13 years old. Child labor laws were not yet in effect. Boarder John Thompson was working general labor at the Cotton Mill. Living on Efird Street, they most likely worked at the old Efird Mill or perhaps its neighbor, the Wiscassett.

After the 1910 census, Scrappy went to live with her uncle, Walter Jonah Mauldin, and family, as can be testified to by the 1914 photograph. This may have been after the death of her mother, Tine. In the book titled "Ye Mauldins" by cousin Ervin Mauldin, her date of death is recorded as November 25, 1912. I have not been able to find a tombstone or record of her death, however.

Scrappy seemed to be exploring her options a bit and was recorded in the local paper as returning to the mills after staying with her Uncle. 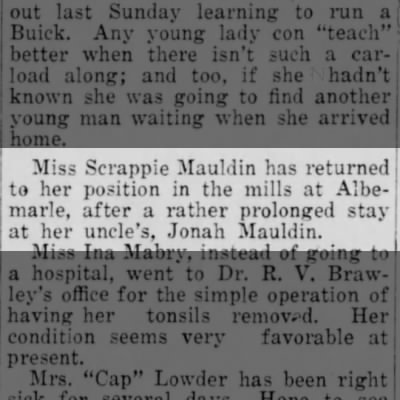 In the 1920 census, Scrappy was now boarding with a Chandler family on Watts Street and back working as a spinner in the Cotton Mills.


This fate would not last long, In the mills, Scrappie would meet her husband.

Charlie Doby shows up in the 1920 census as living on the Salisbury Road and working as a "Section" or section hand in the Cotton Mill. He had a wife and 4 young sons. On March 9, 1920, his 29 year old wife, Patty Carter Doby would die of Pulminary Tuberculosis, a disease that was rampant in this era.

A year later, on March 26, 1921 Scrappy aka Bertha Mae Mauldin, would become the second wife of Charlie Doby.


The couple would waste no time enlarging their family.

By 1930, the family had moved to Cedar Street and two daughters had joined the family. Lonnie, Coy, Dewey and Elmer were all sons of Pattie Carter Doby. Daughters Helen and Mary were daughters of Scrappy.


Tragedy was no stranger to Scrappy and it would strike again. On March 18, 1931, she would bring her third daughter, Emma J. Doby, into the world and on March 11, 1934, one full week short of 3 years later, she would lay the child to rest. The reason given for her death was "Croup". Many little ones never made it to school age in those days.


The 1940 census would reveal that the family had moved again, but not very far. This time from Cedar Street, on the "Efird Hill" to Ludlow Street, which was off of Depot Street and in front of the mills, closer to town, school and the park. 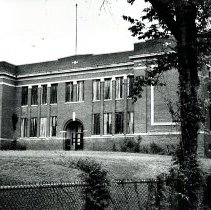 Elmer was still living at home and Scrappy's daughters Helen and Mary were now in their teens. A fourth child, son Arnell K. Doby, had joined the crew. Son Dewey, who was married with 3 children, was also living in the home.

The 8 children of Charlie Doby and his two wives were:


The children of Charlie Doby and his wives Patty and Scrappy have left an indelible footprint on Stanly County and Albemarle in particular.