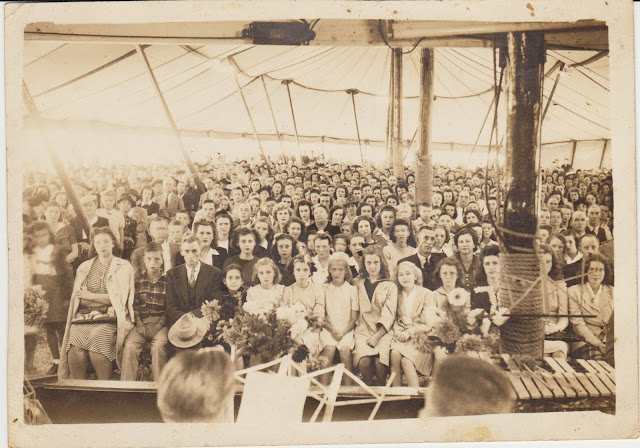 I thought I had posted this photo of an old timey camp meeting under a tent, or a "Tent Revival", before, but upon searching, I could not find it.

This photo was in a collection of my grandmothers and from the dress of the people involved, I would guess it was taken maybe in the 1940's, possibly the late 1930's. Then again, I am no expert on vintage fashion. The hairstyle and plaid dress of the woman in the coat with her arms crossed on the front row beside the young boy looks very WWII fashion-wise to me.

The photo is I believe from the old Rehobeth Church in Southern Stanly County, North Carolina. It could possibly have been at Cottonville, too. Rehobeth was abandoned sometime in the late 1950's, early 1960's and several of its members joined Cottonville and several, who had moved to the town of Albemarle to work, in my family, joined Pilgrim Holiness, which would later change its name to Albemarle Wesleyn.

We see the back of two men's heads in the foreground. Were they performing music or was this two ministers taking turns ministering to the flock?

The place was full, that is for certain. A sea of faces goes back and back and extends beyond the shelter of the canvas. A row of little girls line the front, some quite assured that they are getting their picture made. They are flanked by a pious older man, probably a farmer in his Sunday best and to the other side a trio of young ladies just a bit older, perhaps the area's most eligible bachelorettes.

About 4 rows back, a stout older woman looks like she would rather be anywhere else but there. Perhaps because of the blurred faces of two youngsters right in front of her who obviously could not stay still.

I can't put a name to any of these folk, but they are the parents, grandparents and great grandparents of people who live in our county right now, and whose family can trace back to this county. Depending on the years, some of these faces, perhaps of the younger ones, might still be alive.

If anyone can be recognized, I'd like to know.

Posted by Jobs Children at 3:24 AM