When Joseph Marshall Herrin made the decision to change his name around 1896 to escape justice and reputation, he did not choose an unheard of name, but a very familiar one. He chose the name "Marshall E. Harwood." Whether he was banking on the sterling reputation of his first cousin, Marshall Elmond Herrin, or whether he hoped to be mistaken for the other Marshall Harwood, his motives can not be fully known.

The three men lived very different lives, albeit coming from the same area and being born at the same time and place in history. But the newly assumed Marshall Harwood was not the only Marshall Harwood in town.

Celia first appears in the 1860 census as a little girl.

The family is intact. Celia is the third of 4 children. All is well. However, the tides have turned drastically by 1870. The family is still intact, both parents still alive and older siblings, Tillmon Alexander Harwood and Mary Elizabeth Harwood, have flown the nest and started families of their own. Younger sisters Celia and Emmaline have started families of their own, too. However, they have neither married nor flown the nest.

Three young children are now in the family. Celia has had 2 children, Marth Josephine Harwood, known as Mattie and Thomas Alexander Harwood, 8 month old in this census. Their father was Moses Edward Wellington "ED" Lowder. Emmaline has had one son, 5 month old John Arbuckle "Archie" Harwood. His father was Julius Lowder.

Having been left by the father of her children, Celia would turn to married neighbor, Ephraim Eudy.

In the Almond Community, wedding bells were ringing as Ed Lowder and Margaret Moose were walking down the aisle to become man and wife, while in the same community, the first breathes of a newborn boy were being taken and the sounds of the wails of an newborn baby could be heard bouncing off the hills.

Thus was the entrance into the world of the real Marshall Harwood.

Celia Harwood appears in the 1880 census, but without her children. At this time, I do not know where they were living, but in all liklihood, they were "bound out" per the practice of the day, and may be in the census, but perhaps wrongfully under the surname of the head-of-household.

Marshall first appears in the records during his marriage.


He was 21 and his wife Rosa is 24. And this marriage takes us back to the name of Mathias Moose.  Rosa D. Moose was the daughter of Mathias Moose by his second wife, Fanny Hatley. She was a half-sister to Margaret Moose who married ED Lowder. Ed Lowder being the father of Marshalls older half-siblings. The official relationships between any of the individuals involved could get a little confusing after that.

So the marriage certificate names the father of William Marshall Harwood as Ephraim Eudy.

Ephraim Eudy was born May 8, 1843 and died on October 7, 1907. He was the son of Jacob M and Catherine Adeline Harkey Eudy, both surnames popular in this area of Stanly County. This area being the Bridgeport/Millingport area. The Feb 5, 1897 edition of "The Daily Concord Standard", described Ephraim Eudy as 'a hustling merchant'. He was both merchant and farmer and an important man with a large family in the Millingport area. 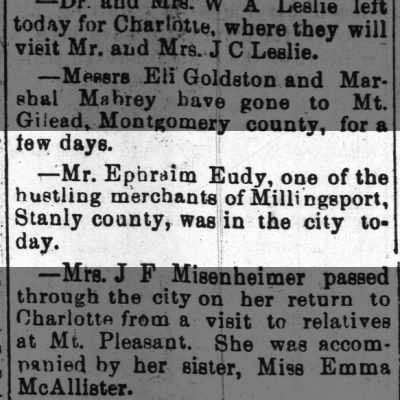 Ephriam Eudy had married Martha Alabama Sides, known as Mattie, in 1867, just after the Civil War when men were scarce and healthy young men scarcer. He and Mattie had had 4 children by the time William Marshall Harwood was born, and several more children afterward. The first child Ephraim and Mattie Eudy had after Marshall was born was a daughter, Lucy Jerome Eudy who married William Riley Hartsell, Jr.  She was known as "Jerome" and was born in November of 1874, just a year younger than Marshall. He must have had a close or admiring relationship to her, because he would name his only surviving daughter, Lillie Jerome Harwood.

Ephraim Eudy, businessman, farmer, miller, and proprietor of a Roller Mill and General Store, left quite the legacy in Millingport, as such that his obituary was printed in at least 3 local papers. 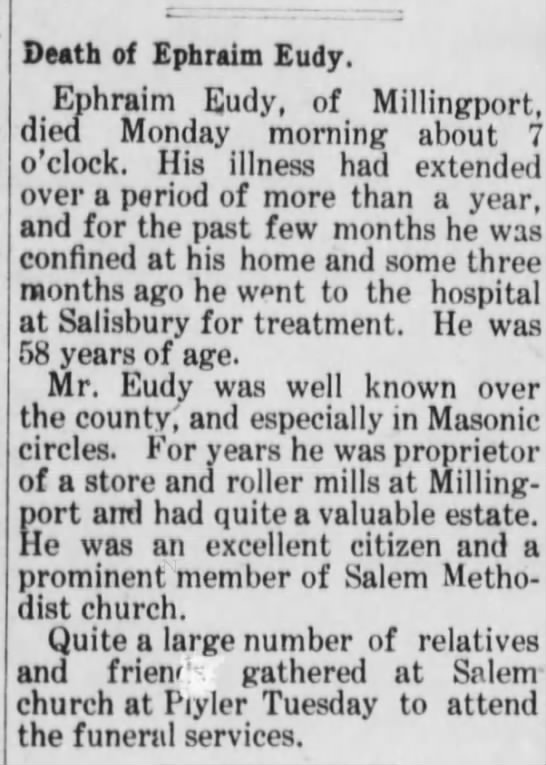 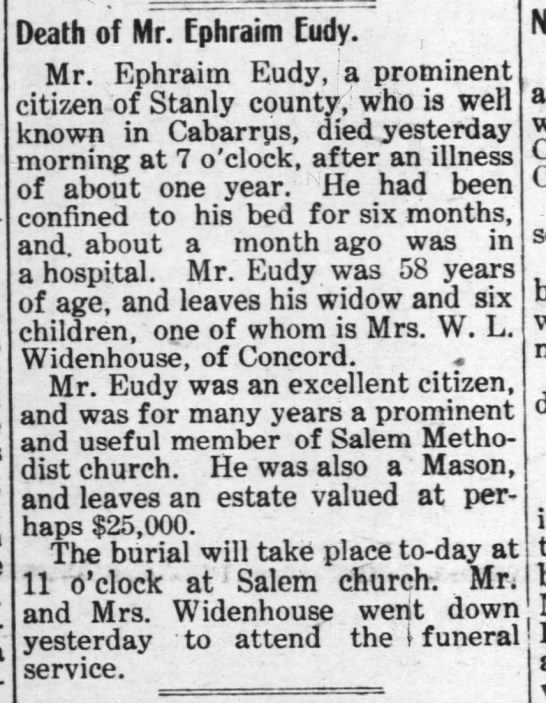 His wife acted as Executrix to the estate. 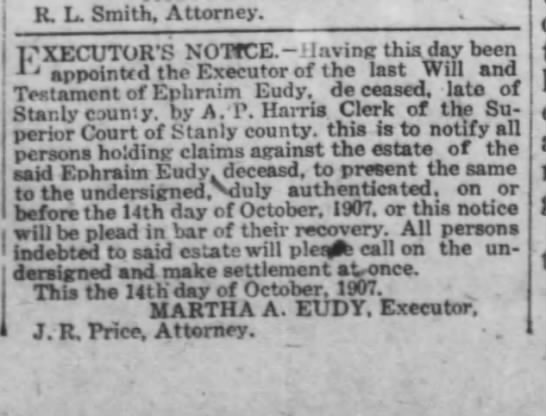 Mattie would follow Ephraim to the grave just 4 years later, neither of them yet 60 years old. 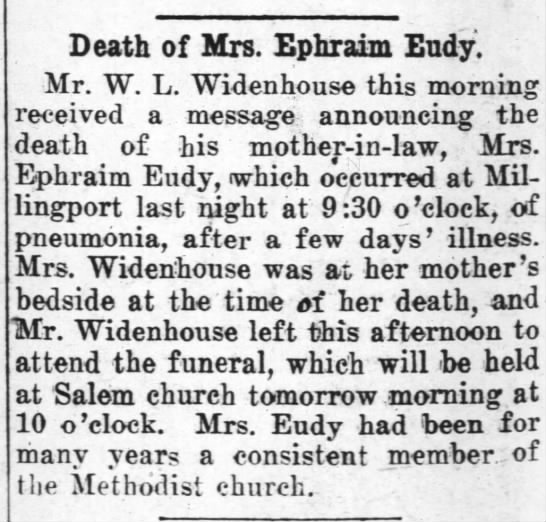 Ephraim had been preceded in death by several of his children, however. The papers reported the sad loss of one of his single daughters, Zula. 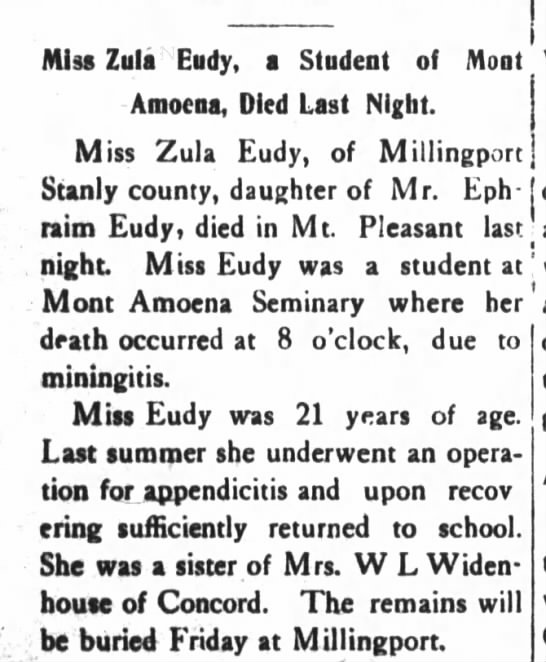 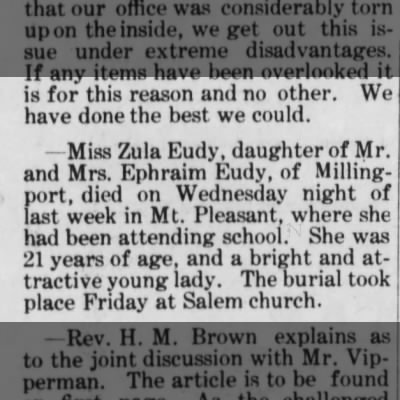 All daughters. Lucy Jerome Eudy Hartsell had passed away in 1905. 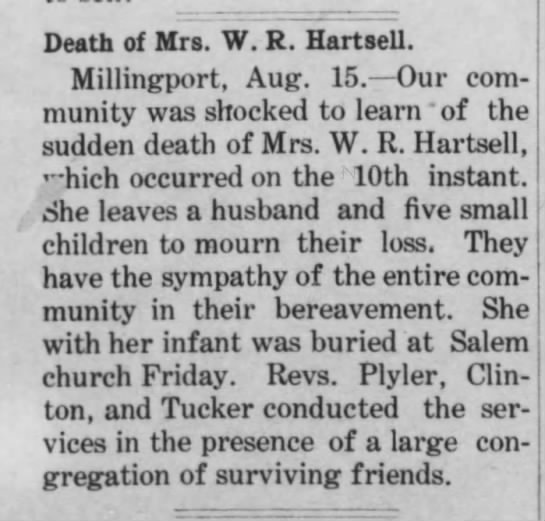 Tombstones record the birth and death of two sons who died as infants or toddlers,

So in his later years, Ephraim Eudy had no son but William Marshall Harwood, and no son to pass on the Eudy name.


Ephraim's life had not been perfect either. His parents divorce, during a time when this was uncommon, can be found within the Stanly County court records, and Ephraim was arrested during his earlier years for "Retailing", or selling illegal alchohol.

So, Marshall's childhood was much different from that of his contemporaries.

He found love in the form of Rosa Moose, of whom I spoke earlier. Their marriage was August 19, 1894 in Bridgeport, which was near the current community of Millingport. The first census Marshall actually shows up in is that of 1900.

The census shows the couple as having been married 6 years and having had 2 children with one living. This is accurate, as Lillie Jerome Harwood is shown as one year old, and buried in Salem UMC cemetery is a small tombstone for Geneva Harwood, daughter of W. M. and Rosa Harwood.


In 1900, Marshall was trying his hand at farming. He was not one to make the papers, but once he did, having to do with a hog. 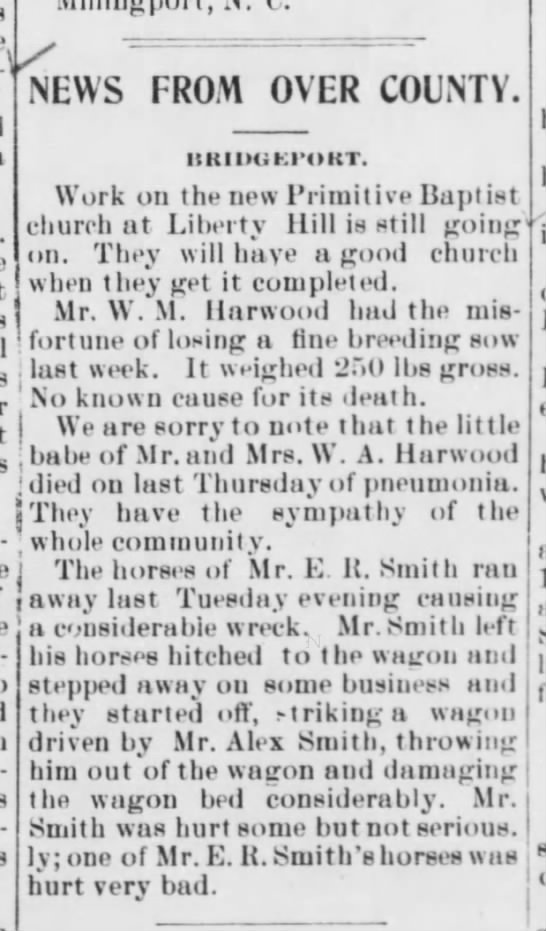 
By 1910, he had moved to Albemarle and the young couple with their two children were living on the "Mill Hill" and working in the cotton mills that were now operating in Albemarle.


By 1920,  Marshall and Rosa's daughter Lilly had gotten married and it was just Marshall, Rosa and son William living in the household.

Lillie married William Walter Tucker on January 16, 1916. In 1920, the young couple was living with son Alexander, living in the last house on Graham Street, where Walter was a farmer. Everyone else on the street worked in the Cotton Mill, including their 16 year old boarder, Ray. Knowing Graham Street, the last house is not like the others and most likely pre-dated the cottage style mill village houses. A city cemetery is on the property.

By 1930, Marshall had moved from Salisbury Road (possibly the current Salisbury Avenue) to Graham Street. His wife Rosa died on May 5, 1928 and was buried at Salem United Methodist Church in Millingport. In 1930, Marshall is working as a yard helper at the Cotton Mill, probably Wiscassett, due to the location of his home. His son William Julius Harwood is living with him along with his young bride Bertha, whom he will be divorced from by 1940. William and his sister and her family will move to the PeeDee community of Montgomery County by 1940, where they will remain and William will remarry to Juanita Mills.

William Marshall Harwood will pass away shortly after this last census on Dec 6, 1932. He was buried with his family at the Harwood home church, Salem United Methodist, with the rest of his family, including his mother.

Joseph Marshall Herrin aka Marshall E. Harwood, would live a life of deceit and trouble with the law, before finally assuming a new identity, relocating to another county, and settling down in his later years.

Marshall E. Herrin would attend school, obtain an education and career, start a lucrative business with his friend and brother-in-law, move to Mecklenburg County and start his own businesses that would leave a legacy for his children and a small business empire that would maintain until present times.

William Marshall Harwood would recover from his unfortunate birth and live the quiet life of a farmboy turned millhand and raise his small family on the "Mill Hill" of Albemarle, NC in the confines of a typical Carolina textile village.

Posted by Jobs Children at 3:05 AM