I wondered about the relationship between Balaam A Carter and Nancy Cranford from the time I saw her residing as a boarder in his home in 1900. The boarder arrangement wasn't an unusual one, but after seeking to find out who Nancy Cranford was, she became a lady cloaked in mystery. Not only Nancy, but also her mother Millie and her daughter Elizabeth. 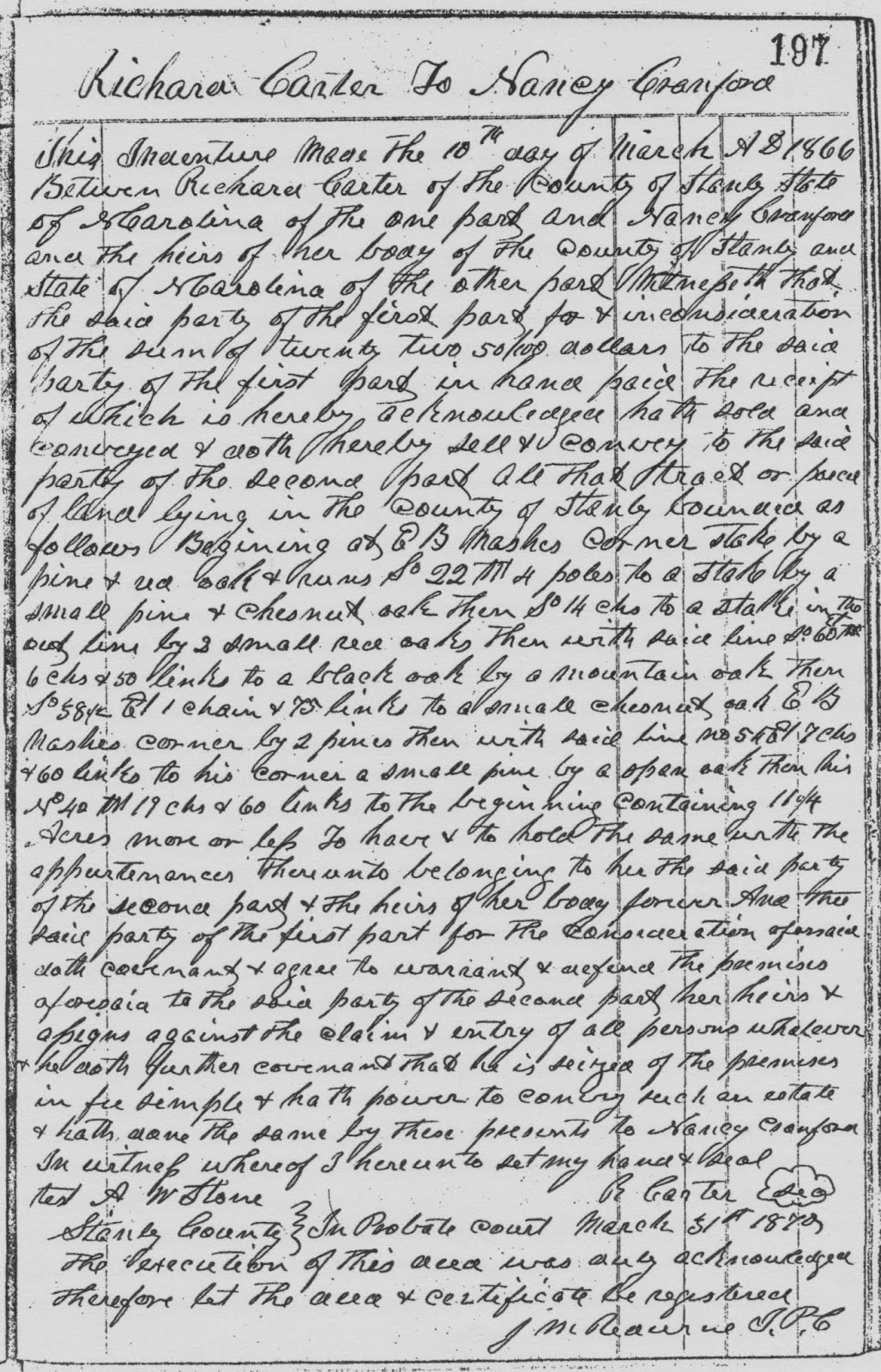 Nancy Cranford may have been born in Montgomery County, North Carolina. It was a center for local Cranfords and more of the family resided there than in Stanly, although I've been able to determine that several of them seemed to move around quite freely and frequently between Randolph, Davidson, Montgomery and Stanly Counties. She first show up in Stanly County in the above deed. On March 10, 1866, Nancy Cranford for twenty-two dollars and 50 cents, purchases 11 1/4 acres of land neighboring that of E. B. Nash from Richard Carter. 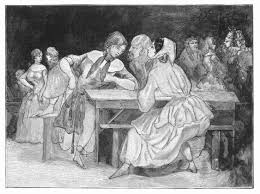 This is the second census that Nancy shows up in, in Stanly County:

From later census records, I know that 27 year old Elizabeth Cranford is her daughter. Mary Rummage, a boarder deserves a post of her own and the infant Cornelius can only be assumed to be the child of Mary Rummage. As seen in earlier posts, the Rummage family had some involvement with the Carters.


This Jefferson was Jefferson Beauregard Cranford, son of Willis G. Cranford. I have seen during research in other lines, on many different occasions, that people were sometimes enumerated several times, and often in a different location. Unlike modern censuses, wherein the enumerators are to determined who lived in a particular house on a particular day, in censuses past, they counted the persons who were there on that day. I have seen young men counted at home with their parents, and then two months or two weeks later, be counted as a laborer in the home of a farmer whom they were working for at the time. I've seen a young woman counted in her parents home, while obviously visiting, under her maiden name and then also be counted on a different with her husband, whom she had married a year or so prior, and had already bore a child.

I believe this was the case of Jefferson B. Cranford, that there was only one. He was first counted while visiting relatives while still 8 years old, then sometime later in the year, after he had turned 9, the census takers showed up at the home of his parents. This link between Jefferson and the Cranford ladies leads me to suspect a close relation between Willis G. Cranford and Milly and Nancy Cranford.

No proof, but a possibility.

The third census Nancy shows up in is still in Stanly County:


This is the one that names Lizzie as her daughter and Milly as her mother. Neighbors in this census are John Russell, shoemaker, his wife Sallie (who was Sarah "Sallie" Carter, daughter of Marcus Princeton Carter) and John's mother, Tempie Russell, all of whom I've covered in previous posts. John was the son of James R. Melton, Albemarle businessman, whom I will cover more when I delve back into my research of the Meltons, who were a very complicated family. 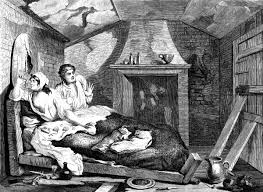 After the Russells' was Winny Poplin, who was Winny Simpson Poplin, who I covered in my posts on the Simpson's to which I will soon be returning. She was a widow at this point.

Then there are the Cranford ladies, after that a farmer, Joseph Wall's family, then Susan Hill, then A. D. Potts, a miner from Mississippi, and after that, the family of F. J Kron, a physcian from France, of whom I've made mention in several past posts. There are no living descendants of Dr. Kron, however, he left indelible marks on the community and his written insights give a great deal of cherished information on early Stanly County.

This also gives us an idea of where the Cranford ladies resided. It was most likely along the market road to Lowder's Ferry and the old town of Tindallsville, that by that time had already been abandoned for the most part.

Notice that Milly was missing in the 1870 census from Nancy and her household. Instead, she was to be found in this household:

Ben Mauldin was the son of James O Mauldin and Mary Ann Smith Mauldin. I see no possible relationship there. His wife Ann was the former Margaret Ann Rummage, daughter of Nelson Rummage and Christine Cranford Rummage. There is the Rummage connection again, along with another Cranford.

Millie also appears in the 1830 census of Montgomery County.

Nancy Cranford, her known daughter, was born between 1820 and 1835, depending on which census you are looking at. Women often lied about their ages, especially when in Nancy's situation.

So, who were her sons?

There appears in Montgomery County, this gentleman:

Leonard Cranford, living with a Sanders family. Also of interest is Wiley Hudson.

He ends up marrying a Mary J Russell and in 1910 is living in this family setting: And then this deed from 1898, wherein Nancy sells her property to Balaam Carter for $25 and support for the rest of her life. What is her connection to the Carters? And was her acquaintance with Balaam more than just one of knowing him or neighbors? Was there a family connection? Could Balaam's mother Mary have been a Cranford or a Saunders?


Or was the relationship due to his marriage to Elizabeth "Bettie" Rummage? Bettie's mother was Beadie Fanny Cranford who married David Rummage. She was the daughter of Nathan Christopher "Kid" Cranford and Sarah Elizabeth "Sacky" Coggins Cranford. Kid Cranford's parents are recorded as being a Leonard Cranford and wife Mary Hopkins Cranford. There has to be a connection, but what?

And then Nancy's last census is the one in which she appears in the household with Balaam, his daughter, son-in-law and grandson.

Transcribers often mistook the surnames Cranford and Crawford, but this was Nancy.

But recall, I started the post with the 1870 census and stated that it was the second census that Nancy appeared in. The first was in 1860, and it raises more flags and question marks than any other.

In it, the three generations of Cranford women are listed, and the ages are probably the most accurate ones. 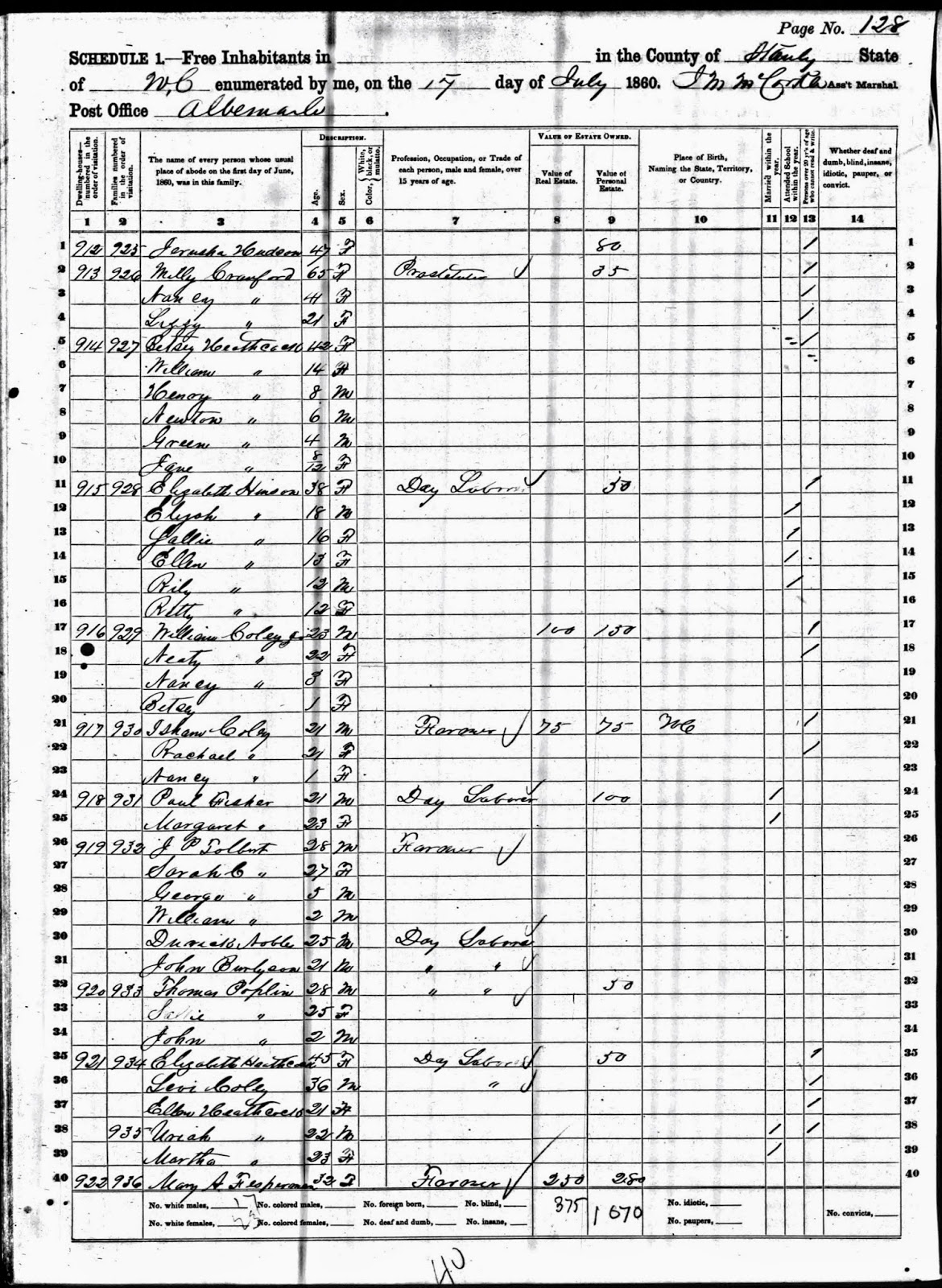 But it is the occupation given Milly and her offspring that colors the page. While the list goes down alternately between "Farmer" and "Day Labor", Milly has acquired a unique title. For the life of me, I can't make anything out of that word except "Prostitutes". I've zero in on it and magnified it and it still says "Prostitutes", not just in the singular, but in plural.

Was this occupation genuine, or were the Cranford women the victims of a bitter census taker for whatever reason?

Sometimes, looking to solve one mystery can lead to discovering many others. Hopefully, more information on these three ladies and the Cranford family, that will solve more of this puzzle.

Posted by Jobs Children at 5:53 AM