The Women in Balaams Life

There were several women involved in the life of Balaam A. Carter, and I believe I've touched on most of them, however, I wanted to document them and investigate them a little more, somewhat for my own benefit. Sometimes, to lay things down and take a closer look, helps to clear a foggy situation.

The first woman in Balaam's life, was of course, his mother Mary, otherwise seen as Polly, which was a common nickname for Mary, as Mary's abound in 19th century Stanly County.

Balaam and Polly escaped the census taker in 1850, however, they show up in the 1860 census, in the Harris Community. Balaam has married Alley, his first wife and her younger brother is staying with them as well, as their parents died in 1850 and 1858.

Polly is 49, giving her an estimated birth year of 1811. Polly is not listed with Balaam in 1870, although I feel like she was probably still in residence, or either staying with his yet unidentified sibling.

She returns to the household of her son Balaam in the 1880 census, this time being identified as his mother.
By this time, Balaam has remarried to his second wife, Bettie Rummage. The transcriber made several errors on this one, but looking at the original document, "S. A." is clearly "B. A." and "Tellie" is "Bettie". Stepson "Lonna O.", was not given a surname in the census, leading the transcribers to assume his surname was Carter, when in actuality, his surname was Rummage.

Mary "Polly" also appears in a land record with her son Balaam:

Balam A Cater to Julius A. Kendall

"This Indenture made this 12th May 1857 between Balaam A. Carter &  Mary Carter of the first part and Julius A. Kendall of the second part all of the County of Stanly and State of North Carolina......Balaam A. Carter and Mary Carter hath bargained and sold........unto Julius A Kendall.....for one dollar paid in hand one bay mare one cow three head of hogs and all our growing crop of wheat after the rent is first paid all of our growing crop of corn after the rent is first paid.....to be held in a special trust made payable to Peter E. Foutz for 55 dollars principal....date not recollected...whereon there is a note wherein J. A. Kendall is security and B. A. Cater is principal....also a note date May 12 1857 payable to Julius A Kendall for $18.87 cents....B. A Carter and M. Carter... 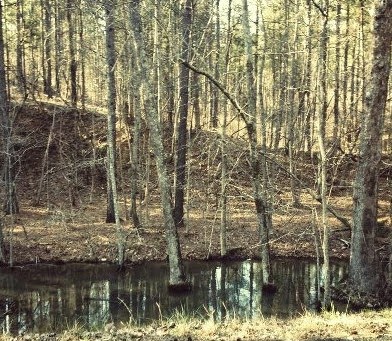 And that is all we know about Mary. Her maiden name and parentage is unknown. It can only be assumed that she passed away between the 1880 census and the 1900 census, as she does not show up in that one. Her burial location is also unknown. The second woman in Balaam's life was his sister Susan.

As seen above, Susan, born about 1840, was living with Balaam in 1860. Unmarried, she passed away the same year, as seen in the mortality schedules, of thyphoid fever.


The third woman in Balaam's life was his first wife, Alvina "Allie" Holt Carter.  Allie's name is seen alternately as Alvina, Almena, Elvina or Alley, in census and land records. In the 1850 census, at the correct age, she is even seen as "Emmaline", but Emmaline, born in 1837, would have to be Alvina, in the realm of the daughters of Allen Holt.
By 1860, Balaam and Alley were married and her parents had passed away. Her younger brother Benjamin was living with them. Holt researchers give the date of Balaam and Alley's marriage as 1854. Allen's estate was settled in 1850 and Phoebes in 1858.

Alley shows up in a variety of land records with her husband Balaam.

An interesting land record involving Balaam is one dated March 10, 1875 involving a mortgage between Jerry Snuggs and Balaam A Carter, wherein "Jerry Snuggs, colored am justly indebited to Balaam A Carter". Mr. Snuggs mortgaged his crops of corn and cotton to Balaam for a loan and T. A. Simpson, who seems to have been a good friend of Balaam, witnesses transactions with him, etc. So was John B. Simpson, who did the same.

Looking at the 1870 Stanly County census, to see who Jerry Snuggs was, and if he lived near B. A. Carter,
I found this record:

And while the Snuggs family were not counted that near B. A. Carter, it was interesting to see who their neighbors actually were. They lived near Nancy Cranford, her daughter Elizabeth and Mary Rummage, who come into play later on. And also the older Margarite Rummage, living with her sister Elizabeth Rummage and neice Elizabeth Rummage. All characters whom I will touch on later in this post or in this series of posts.

In 1880, Mr. Snuggs and wife Jemima are living with a grandson and near Martha Rummage, of whom the post:   The Bird in the Branches  was concerning.

On April 5, 1870  Balaam Carter and wife 'Elvina' mortgaged property on Jacob's Creek adjoining John Kelley and others, to Daniel Freeman, a storekeeper and businessman. The second time Alley's name is shown in the document, it is as "Balaam Carter and wife Alvina" and it the postscript of the document, wherein she is interviewed separately from her husband to assure she has not been coerced into selling property that she is not willing to, her name is shown as "Alvainia". This mortgage was satisfied in full on January 15, 1885.

In 1875, she is shown as "Alvina" in a mortgage from Balaam to James M. Redwine for $10, 'these articles of personal property," including a 2-horse wagon, a 10 year old mare, and a blind. (Or it could have read that the mare was blind).

On January 9, 1875 another record of a transaction between Balaam Carter and wife Alvina Carter and John A. Lilly, on the waters of Jacobs Creek, adjoining the lands of George Rummage, deceased, Carolina Frye and others.

Looking at the 1870 Stanly County census, I did see the family of a household led by a female, Sarah Rummage, living nearby,  and also the following Fry family:

Also in 1875 was a transaction between B. A. Carter to "Mauney & Company" on January 26th. In it "B. A. Carter and wife 'Aviry' Carter" are indebited to E. A. Forrest, Ephraim Mauney and son, and Mauney Trading Company for $30.00. Later in the document is named "B. A. Carter and wife Alley" and later when Alley is examined separatley, she is again referred to as Alley Carter."

Alley died sometime before the November, 1879 marriage of B. A. Carter to Bettie Rummage.

In the book "These Hallowed Grounds" published by the Stanly County Genealogical Society in 2012, under the heading of  The Isaac Mabry Cemetery, it is mentioned that Richard Ingold, owner of the property the cemetery is on, remembers a stone for Alley Carter being there. It makes sense as the cemetery is in an accurate location and there was involvent between B. A. Carter and the Mabry family.

Alley showed up in 2 censuses with Balaam. They were married roughly 20 years, with no children.


1860, with her younger brother, Ben Holt, mother-in-law Polly and sister-in-law Susan. And then, alone with Balaam in 1870.

The next woman in Balaam's life was Catherine Simpson Mabry. "Kate", as she was known, was the daughter of Isaac and Lucy Simpson.

On November 15, 1878, she became the mother of Balaam A. Carter's only child, Ann Eliza Carter.

Catherine and Balaam were not married. Apparently, at some point, Catherine married a Mabry. It may have been to Frank Mabry. There were at least 3 Frank Mabry's in the area at the time. Perhaps Mr. Mabry thought the child was his. At any rate, the following bastardy bond was filed with Catherine naming Balaam as the father. T. A. Simpson, again signed in for his friend and another document this same year ordering Balaam to court to answer for this was signed and co-bonded with John B. Simpson. Notice that Catherine's name was written as Simpson, then a line was made through it and Mabry written above it. She may have been a recent bride. 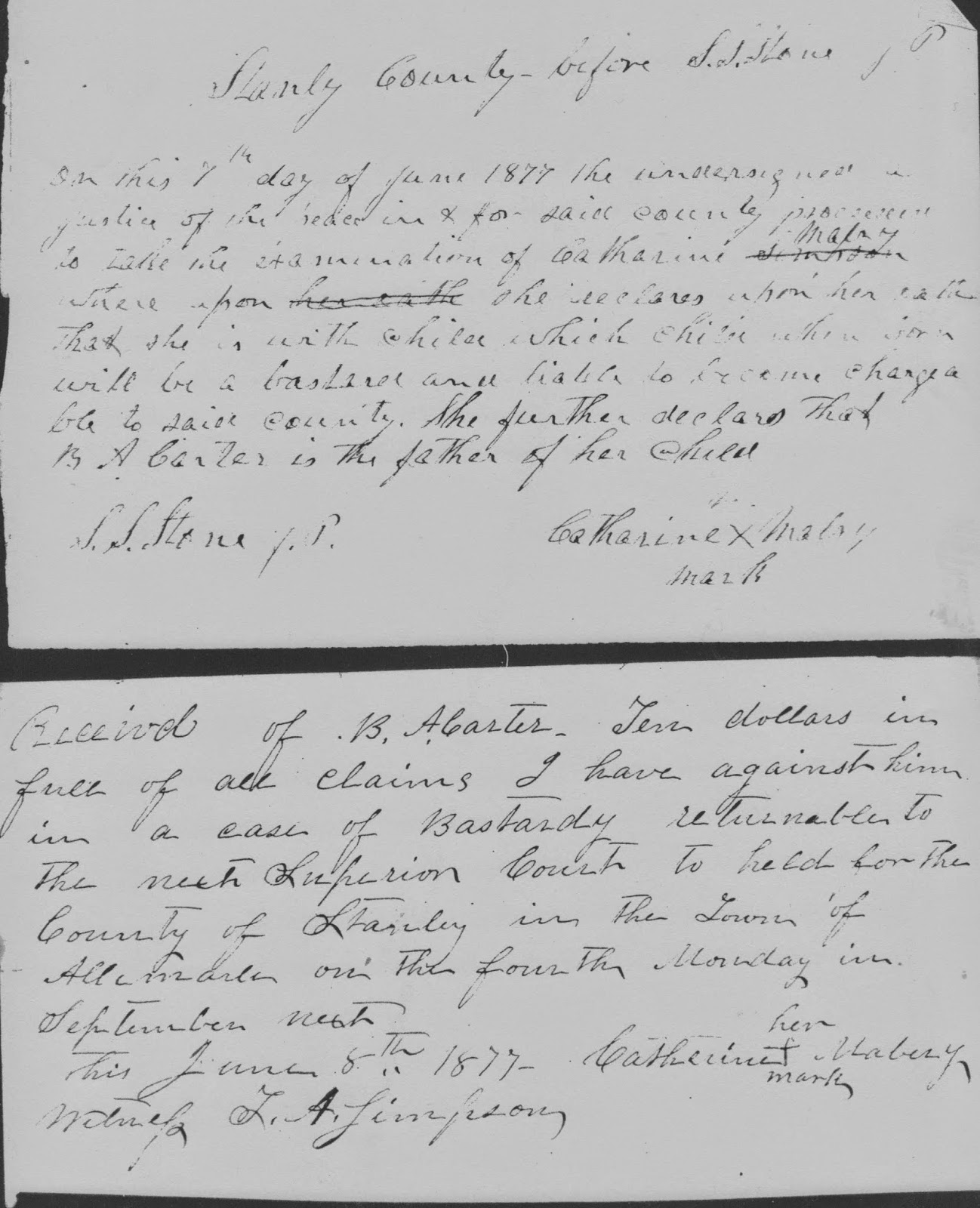 I have not been able to locate Cartherine Simpson Mabery or her daughter in the 1880 census. On Ann Eliza's marriage license to John F. Russell, however, she lists her father as B. A. Carter and her mother as Kate Simpson.