Balaam A. Carter was the 'other Carter' I was looking into in my previous post Marcus P Carter and the Estate of Joshua Carter.

While he mentions the names of his parents in his marriage certificate and appears in a number of consecutive census records, B. A. Carter was still a bit of a mystery. 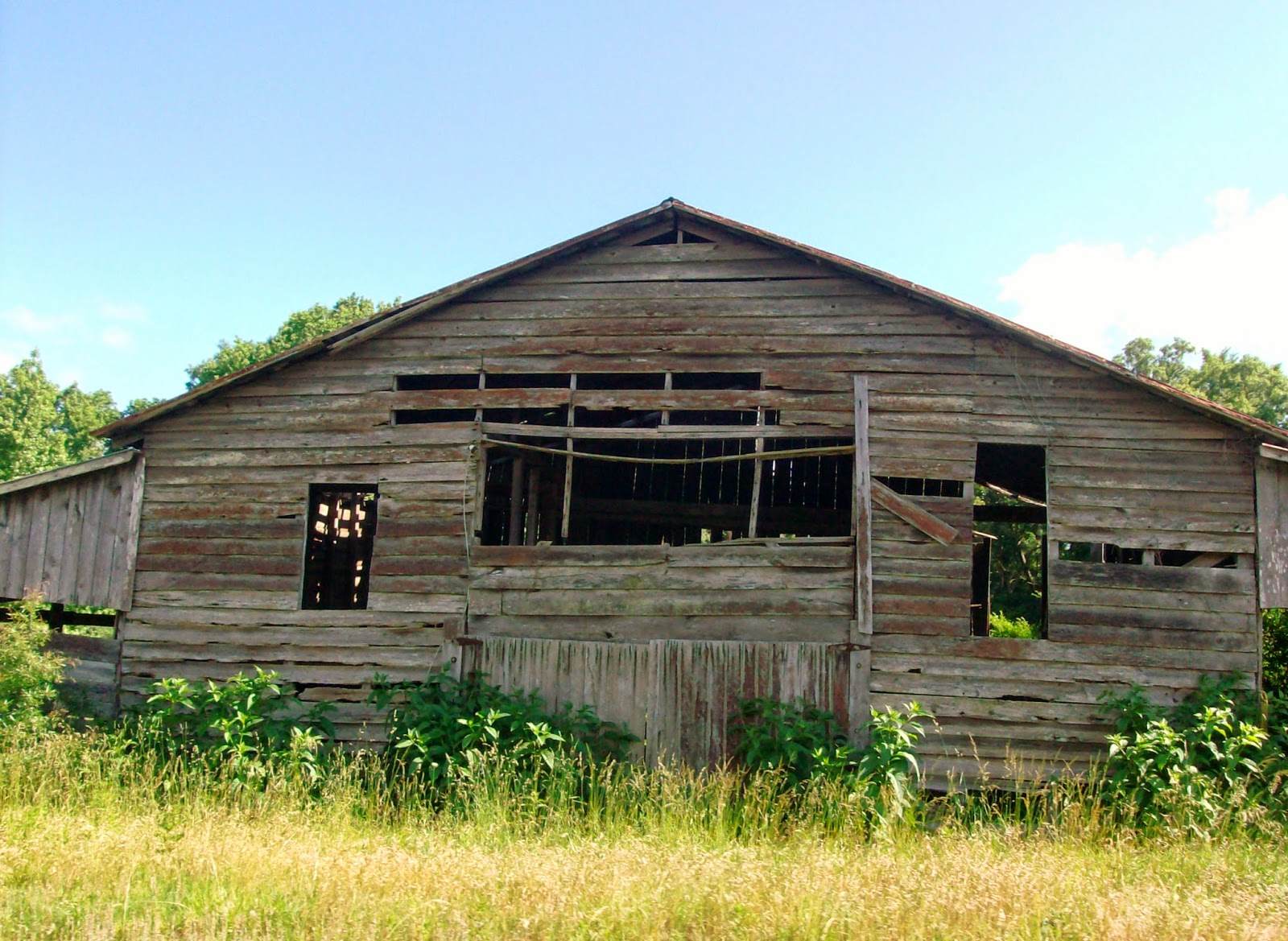 He does not show up in the 1850 census of Stanly County. Actually, I've not been able to find him anywhere, yet. It may be that his household was simply missed. That was not uncommon. 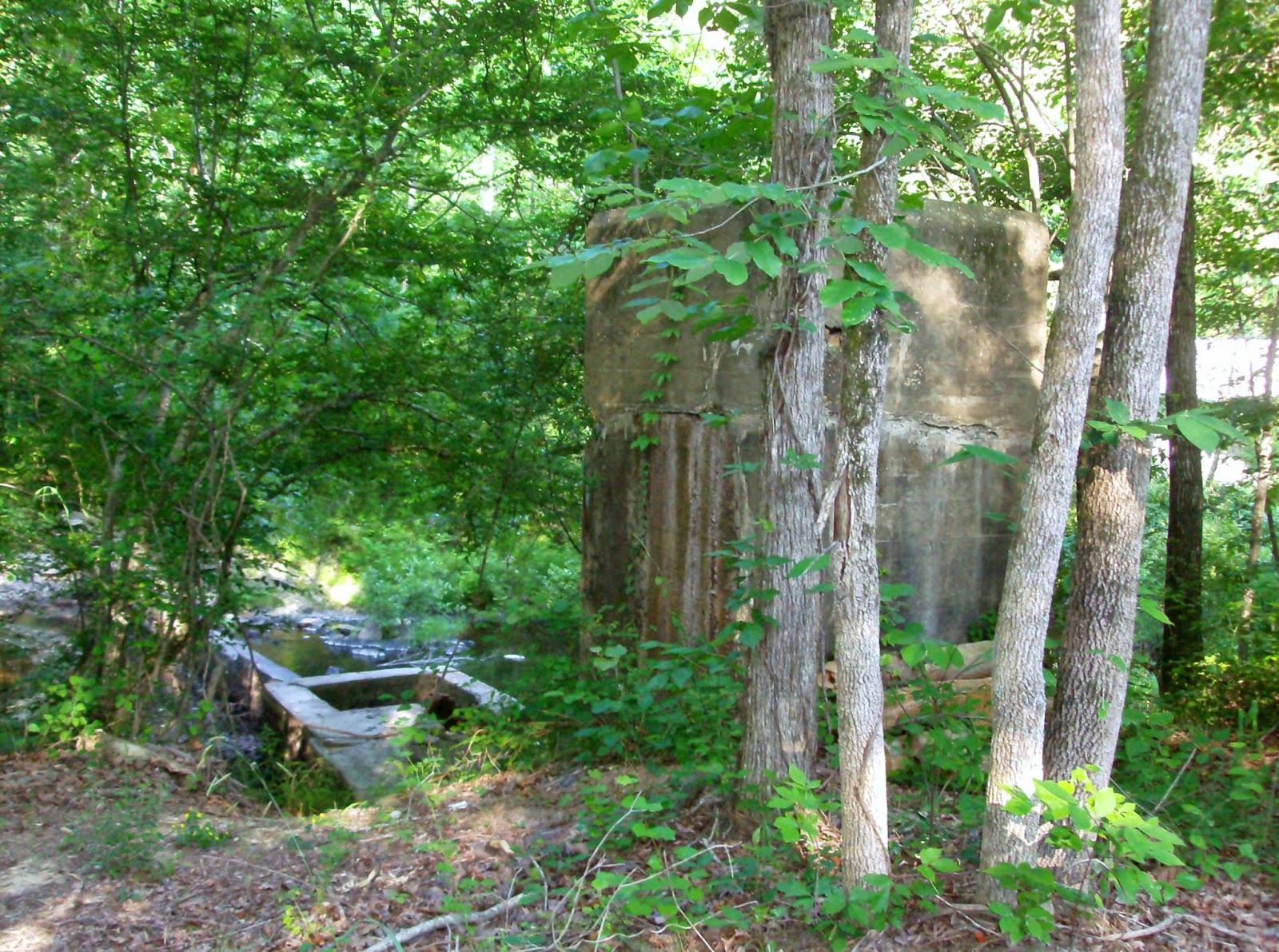 He first shows up in the 1860 census. He was living within the area of "Albemarle Post Office" and was listed as a Shoemaker and 28 years old. Neighbors included Miller Easley and Henry Easley, Betsy Hill and Harriett Hill and Henry Marshall. Living with him were Alley Carter, 29, a young boy Benjamin Holt, 49 year old Polly Carter and 20 year old Susan Carter.

This census appears like Alley Carter may have been his wife. I would find out later through land records that she was. I would also find out from the 1880 census and other land records, that Polly Carter was his mother. I have no proof, but am pretty confident from the placing of the person in the household that Susan Carter was most likely his sister. I did, however, discover from research that Benjamin Holt was the son of Allen and Phoebe Holt. His father had died shortly after the 1850 census. At this juncture, I don't know if there was a relationship between the Holts and the Carters. There were several Holt/Carter intermarriages.  As I don't know Alley's maiden name yet, or Phoebe's maiden name, it's possible that there was an unknown kinship.
From the ages of Balaam and Alley in 1860, it's likely they were married after the 1850 census, so I might be able to find Alley's identity by finding her in that year. Research is always ongoing.

Ten years later, Balaam and Almena are on their own. At first glance, this would appear to be an entirely different woman than Alley, due to the age difference. However, land records float easily back and forth between Alley and Almira and Almena as being the wife of B. A. Carter. Same woman. The transcription of this age is incorrect. The '5' looks like it could be a '3' and the '0' could as easily be an 8, so I believe the actual age recorded here would be 38.

B. A. Carter, like most men of his generation, served in the Civil War, and luckily for him, he survived.

The late 'Seventies' was a busy time for Balaam Carter. The last year his wife Alley (or Alvina, Alvira, Elvira, Almena as she is variously noted) appears in a deed with him is in January 1876.

In June of 1877 B. A. Simpson was brought to court on the the word of Catherine Simpson Mabry on charges of bastardy. 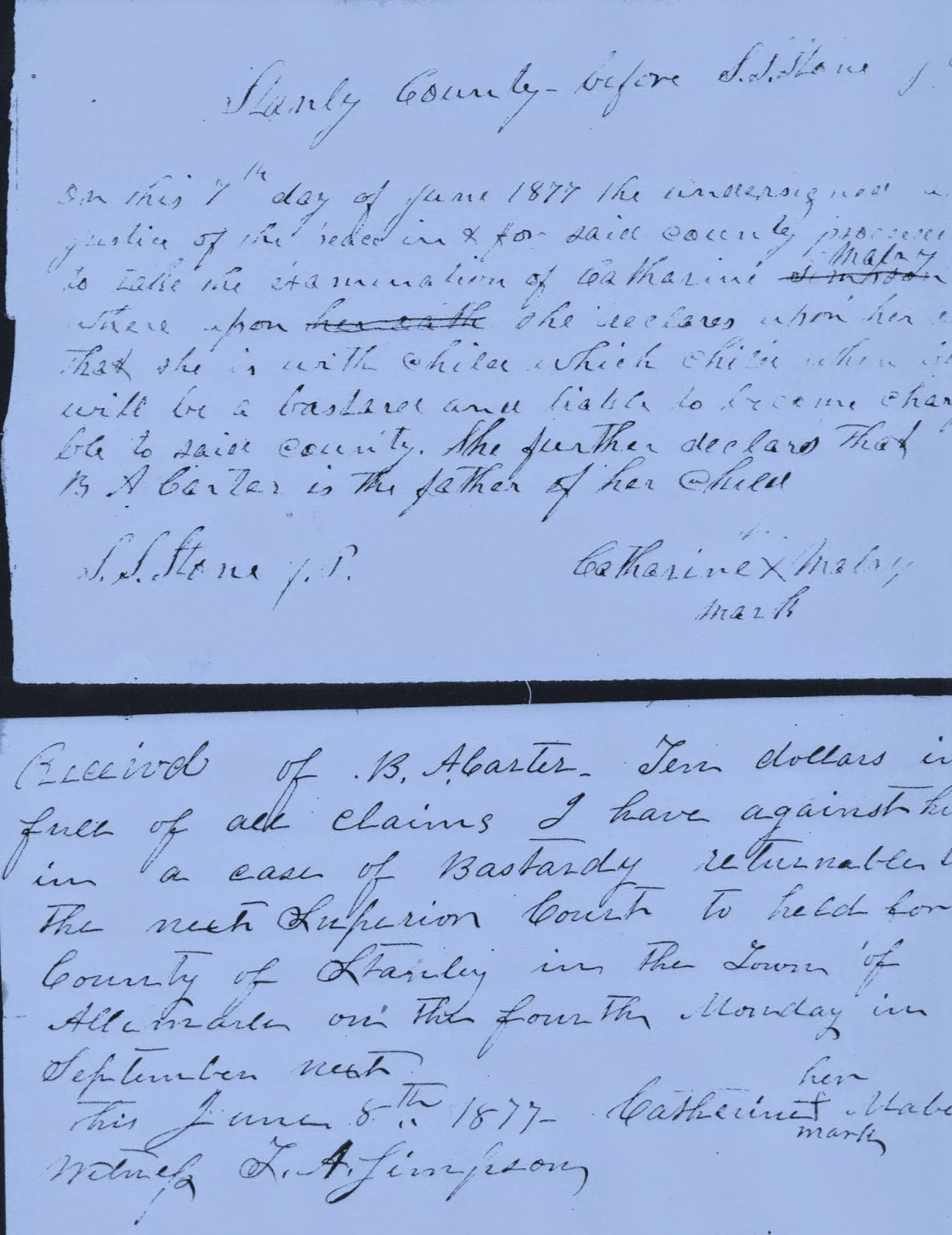 In the document after Catherine's first name, you can see the "Simpson" marked over and Mabry written in it's place. This page was witnessed by T. A. , or Thomas Alexander Simpson. Catherine was the daughter of Isaac and Lucy Simpson. I've never discovered Lucy Simpson's maiden name, however, another researchers notes, her maiden name was given as "Dee" and it was noted that she was Native American. I've not seen proof or disproof of this claim either way.

T. A. Simpson was a cousin of Catherine Simpson, who must have been married to a Mabry at some point. There is no marriage record for her in Stanly County. The child born was Ann Eliza Carter, whom B. A. Carter fully embraced, as she was his only child. On her marriage license, she lists her father as B. A. Carter and her mother as Kate Simpson. 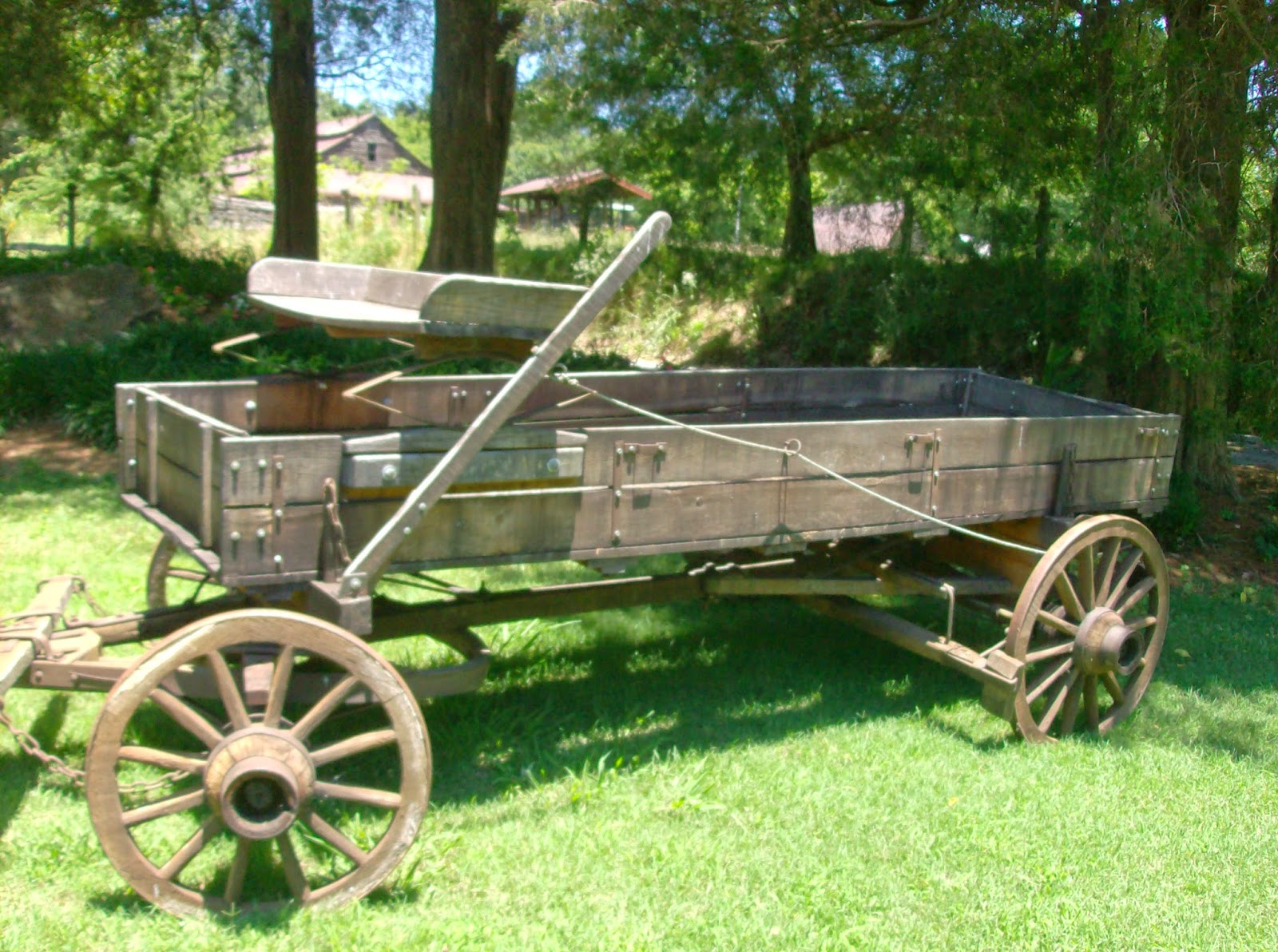 John Brantley Simpson had an out-of-wedlock child himself, with Martha Jane Rummage, whose sister, Bettie,  Balaam Absalom Carter would marry two years after the birth of his daughter Ann Eliza with Catherine Simpson Mabry.

This second page reads "Know all men by these presents that we B A Carter + J. B. Simpson are held and firmly bound unto the said State in the sum of $200 to the payment of which we  bind ourselves, our heirs + assigns jointly and severally firmly by these presents sealed this 7th day of June 1877, .......charging him with the  the maintenances of a certain bastard child begotten on the body of Catharine Mabry and shall indemnity the said county from any + all charges for the maintenance of said child. " 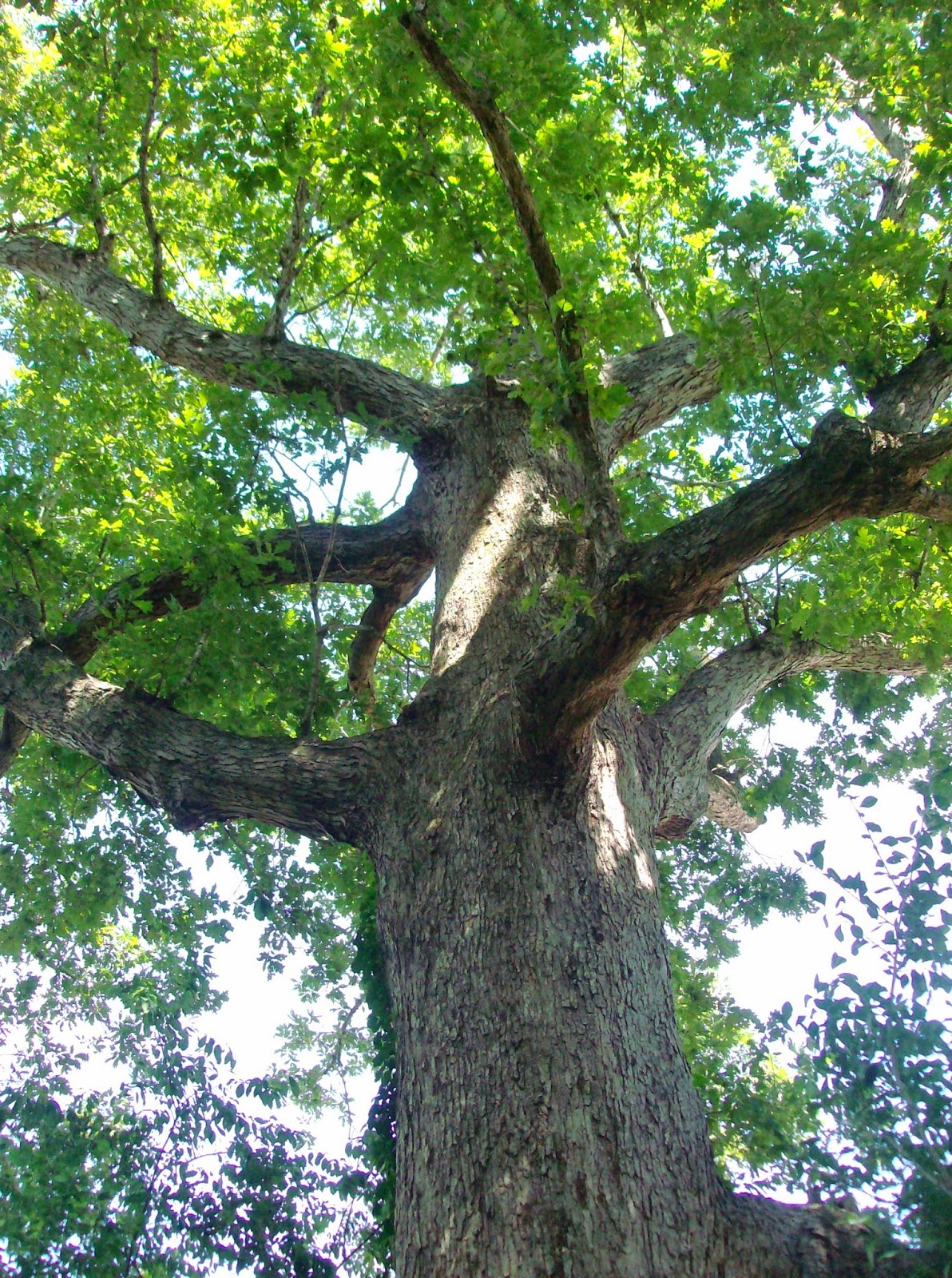 It is signed by B. A. Carter and J. B. Simpson, who were obviously close friends. J. B. Simpson would also be a first cousin of Catherine Simpson as his father Thomas, and her father Isaac were brothers.

On November 23, 1879, B. A. Carter, son of James (d) and Mary Carter,  age 50,  married Bettie Rummage, 35, daughter of David Rummage. No mother's name was given for Bettie, but it was noted that she was deceased. The official was Joseph S. Dunn and the event took place in Stanly County.


In 1880, we have a bit of transcription error problems, but in looking at the actual handwritten census, we have the right family.
S. A. was actually B. A. , of course and "Tellie" was actually written "Bettie". 14 year old male, Lonna O. Carter was not a Carter. His correct surname was omitted, so he comes up as a Carter, when he was actually Bettie's son Lonnie or Lonna Oscar Rummage. Polly Carter is confirmed as Balaam's mother "Mary" and also appeared within his household in 1860.

A series of land records involving the Rummage family tells a tale that involves Balaam Carter.

And then in the course of 4 years, a major rift and change occured 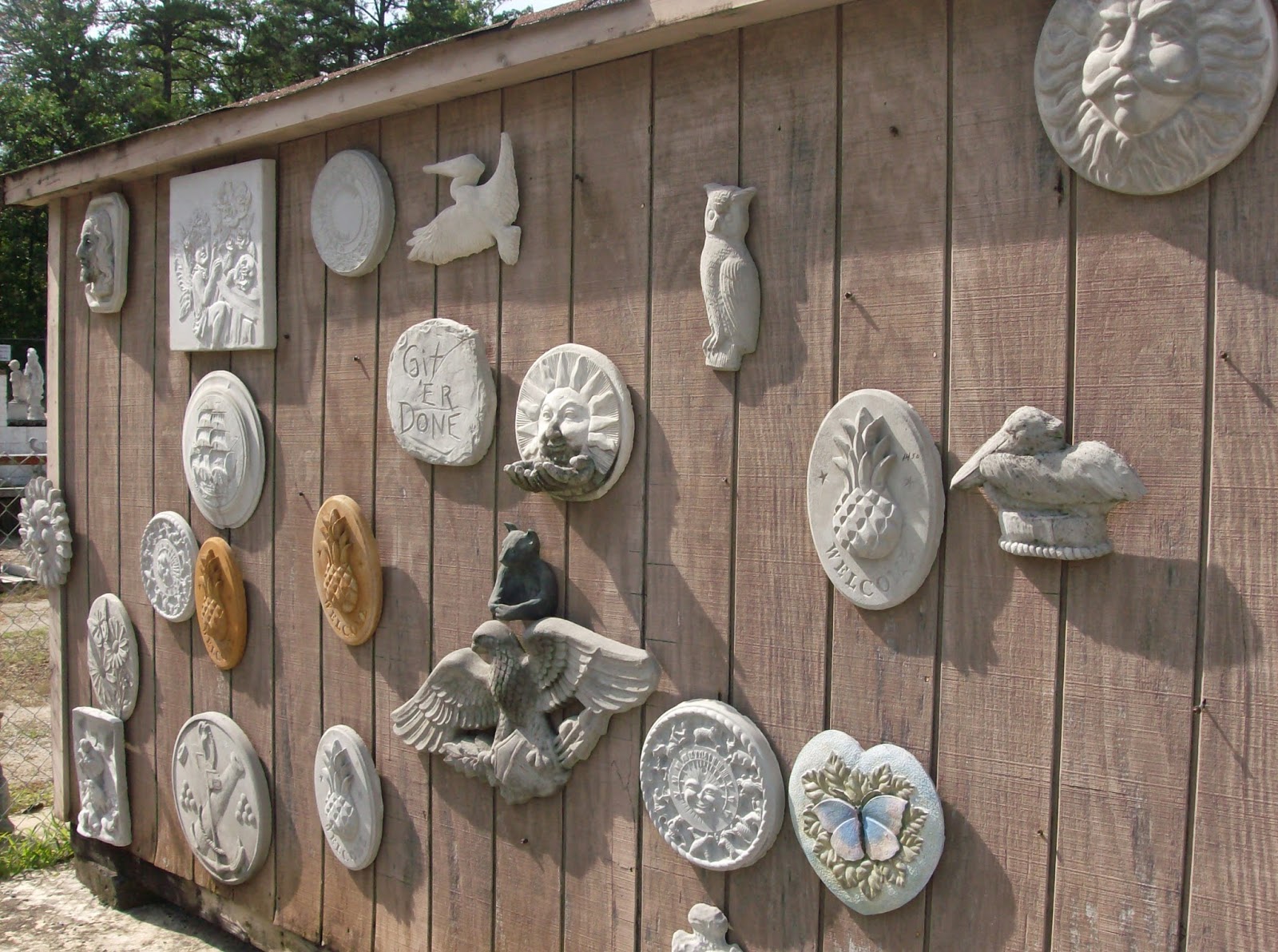 Bettie has dropped the Carter from the end of her name and returned to being a Rummage, and apparently, or possibly, moved back in with her sister Martha Jane or "Mattie". L. O. Rummage was Bettie's son.

In 1900, Balaam's daughter Anna and her husband John F. Russell are living with her father along with George C. Russell, their infant son. The person of Nancy Cranford is another mystery as is her relationship to the Carter family.

Neither B. A. Carter, Ann Eliza or John F. Russell appear in the 1910 census.

And another mystery involving B. A. Carter involves his stepson. Lonnie Oscar Rummage.

Lonnie Oscar Rummage was married twice, first to Mary Ann "Molly" Talbert on September 13, 1885. She was the daughter of Josiah Pinkney Talbert and Sarah C. Melchor Talbert. Secondly to Talitha Cumi Whitley, daugther of  Lloyd Hathcock Whitley and Sarah Susanna Hinson Whitley, on January 7, 1906.
She would also marry Hosea Alexander Simpson prior to the death of Lonnie O. Rummage and have another son, in addition to the four she had with Lonnie, including one who died as an infant.

Another researcher logged a marriage between Mary Ann "Molly" Talbert and a "Balium Carter". Who could "Balium" be, but Balaam A. Carter. No other local Carter came close to sharing his name. The closest being the well-documented Rev. Baldwin Henderson "Baldy" Carter who married Minty Holt.

The case of Balaam Absalom Carter is far from solved. His marriage to Elizabeth "Bettie" A. Rummage was intact from 1879 to at least 1888. By 1892, she had returned to using the name "Rummage". Bettie was buried under the name "Bettie Ann Carter", however. She died on December 2, 1899 and is buried at Anderson Grove Church right outside of Albemarle, North Carolina, her final resting place marked with a slab rock. Balaam Carter's obituary also noted that he was buried at Anderson Grove, but his marker is not to be found. Balaam Carter died in 1910, but did not appear in the census for that year. His obituary is below. 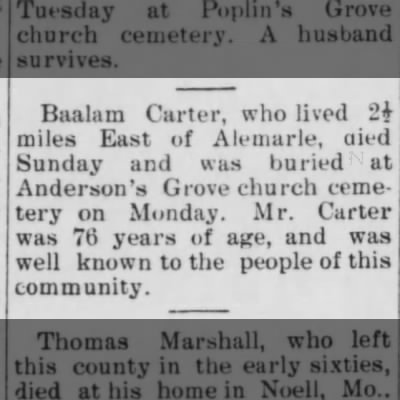