Ledgers and Meltons and related families

In Stanly County, we are fortunate that we have had several store ledgers and even a physcians records from prior to the Civil War digitized and available online. Our local museum is not just a showcase for displays, but an archive of all things historic locally, with a fantastic staff that have worked diligently to preserve, transcribe, and make available, all this information for our research and perusing. 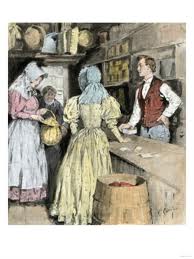 These items can tell us more about an individual or a family than you would think. Not just what they purchased, what medicines they took, or what the cost of things were back then, but other important things genealogically.

These records have names in them that are not listed anywhere else. Some of them of from the 'days of the dashes', where, if you were not a head of a household, your name is not listed.

I've found:
- the names of sons who came of age between censuses and either died or migrated.
-the names of wives who didn't make it to 1850, where they would be listed.
-entries where people of the same surname came in on the same day. This does not prove a relation, but certainly suggests it.
-Proof that certain individuals were still in the area on a certain date, which narrows the window of their time of migration.
-medicines they bought which may indicate an illness they had.
-certain signs of character.
-and some named relationships "son of", "widow of", "with father" and the like.

These books are a treasure.

Below are some examples: 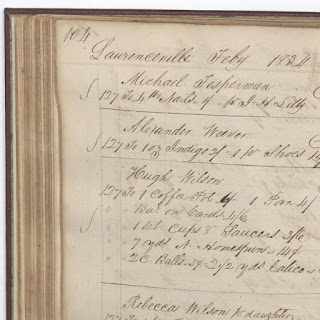 This entry in Daniel Freeman's Ledger from Lawrenceville, Montgomery County, North Carolina, is the only record of a "Weaver" being in the vicinity in the years 1833 to 1837. Lawrenceville was one of the several county seats when Montgomery and Stanly County was one. It was on the east side of the PeeDee and not too incredibly far from the Swift Island area. The families that lived on the Stanly County side of the Swift Island ferry seemed to visit the store at the same time. Perhaps they did this purposely and shared a ferry ride.  Weaver becomes important in the Melton/Milton research later. 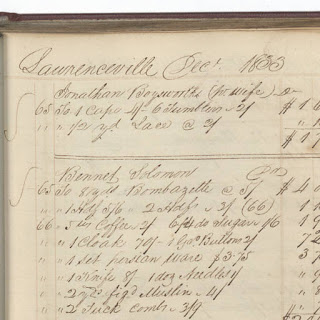 This entry shows Bennett Solomon still in the area in Dec. of 1833. This was probably Bennett Jr. who migrated to Tennesee. Bennett Solomon senior was a minister and married Ava McGregor, daughter of the Rev. William McGregor of the "Mouth of the Uwharrie" Baptist Church. Ava McGregor Solomon is listed as a widow in Warren County, Tennesee. Most of the Solomon family migrated to any of several counties in Tennesse, Warren and Grainger among them. 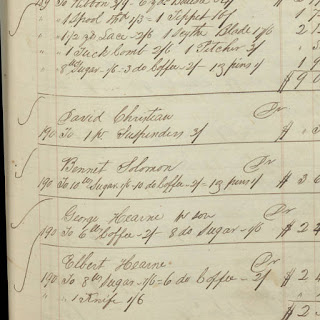 This entry list David Christians purchase of suspenders, Bennett Solomon's purchase of sugar and coffee and George Hearne's purchase of the same for his son. Below him is Elbert Hearne, whom I've not seen mentioned in any Stanly or Montgomery County census record. In 1850, there is one in Chatham County, aged 12, living in the household of John G. Hearne, most likely a son, as the list of children is by age. 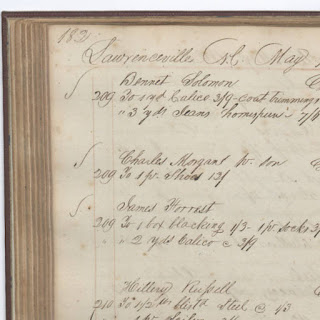 This May 1834 entry for Bennett Solomon also includes a charge for goods he is picking up for James Thompson.

In this entry, Charlotte Melton is buying homespun, a type of cloth, along with the ever popular coffee and sugar. Married women usually did not make purchases, their husbands did that for them. Most of the women who showed up were single or widowed. There were exceptions. Charlotte Melton was not married. 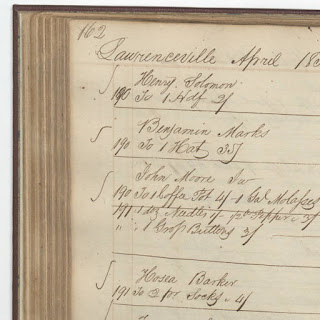 Henry Solomon makes an appearance in the ledger. This Henry is one of those who migrates to Tennesee. He is shopping on the same day as Benjamin Marks. That is important. This entry follows the Bennett Solomon one on the previous page.
Here Polly Melton pays cash on her account and buys a hat. Polly was a very frequent visitor to the store, sometimes multiple times a month. She purchased staples, but also a great deal of finery and medicines.

John Hogan Lilly is on the same page as William B Melton. John Hogan Lilly married Frances Melton, daughter of John Melton, Sr.  William Melton bought silk, which may indicate a wife. Or perhaps he was making the purchase for a mother or sister. He never shows up in a census as Head of Household. He had to have been counted pre-1850 as a member of someone else's household. He either died or migrated before 1850. I am looking to see if I can find a William that could be him in some of the known places other members of the Melton's and connected families migrated to. He is not to be confused with William Jones Melton, son of John Sr., who did migrate to Tennesee. William J Melton would have been a child at this point in time. William B. is clearlly a different person.


John Melton Jr. on the same day as James Boysworth and Joab C. Bird. John Jr. married Nancy Boysworth and James was his brother-in-law. Joab C Bird did migrate and I've spoken to his descendants. Notice that he purchased lead in conjunction with J. Boysworth. It is likely these neighbors/relatives made the trip together. 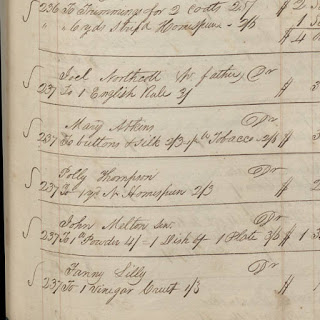 On this page, John Melton Sr. is listed right over his daughter, Fanny (Frances Melton) Lilly.

Apparently John Sr. and his son Henry made the trip together on this day. Henry appeared as Head of his own household by 1840, so he was one of the older sons of John Sr.

John Melton Jr. makes a purchase on the same day as John F Bird. The Bird family was one in which the Melton's had a close alliance. The Forrests, Boysworths, Solomons and Birds seem to have had a connection to the Melton's prior to their arrival in Montgomery/Stanly County. They formed close alliances to the Kirks and Hearne's after their arrival. 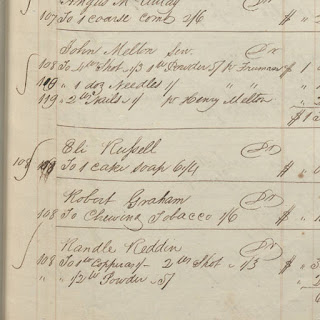 Here Henry Melton is listed within the account of John Melton, Sr. 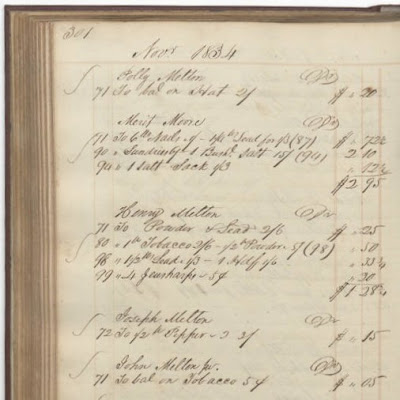 This page from November of 1834 has four Melton's on one page, Polly, Henry, Joseph and John Jr. Polly was also seen as Mary.

Here, Mary Melton (aka Polly) purchases some camphor and other medications. 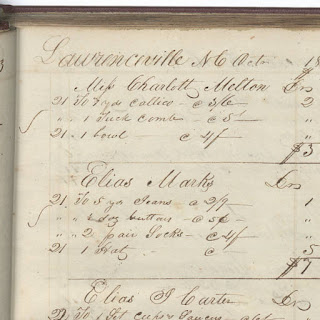 Here Charlotte Melton is referred to as "Miss", indicating that she was a single woman. She purchased calico, tuck combs and a bowl. 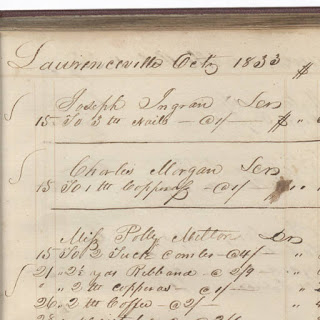 Here Polly Melton is also referred to as "Miss". Mary, or Polly, purchased a great deal of medicines and finery, like lace, silk, ribbon and pearl buttons. She also seemed to suffer from a number of ailments.

Here, Nancy Solomon purchases a cape, among other things.

On this page, Nancy Solomon (top order), Elizabeth Boysworth and Charlotte Melton all appear on the same page. Charlotte was a little more conservative than Polly. She mostly purchased ordinary cloth like checks, homespun and calico. 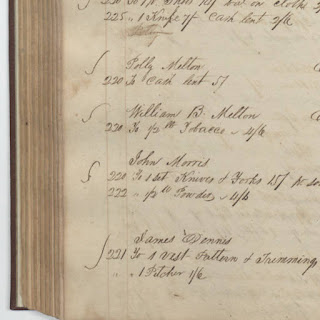 Here Polly buys "British Oil" and "Spanish Brown". I had to look these two items up. Betton's British Oil was a liniment and Spanish Brown was an Oil Cloth, or a paint in terra cotta shades used to weathproof tarps, etc. It was derived from mixing linseed oil and iron oxide. People purchased lots of chemicals used as dyes to dye their own material.

In January of 1834, Polly purchased a set of cups and saucers, needles, side combs and a pair of women's shoes. Side combs were a popular item, they must have been easily lost. Cups and saucers were not a common purchase. . They were expensive. She must have been entertaining. Benjamin Bird also came shopping that day. He made a purchase with Calvin, most likely referring to Calvin Bird.
Polly made a purchase on the same day as William B Christian, Eli Shad and Randall Howell.

Here William B Melton made a purchase following Henry Melton and John Jr. on the previous page. Same date. Turner Scarborough was also a customer. Many of the Scarboroughs migrated to Tennesee about the same time as the Solomons and Jephta Melton, who fought in the War of 1812, from Montgomery County, NC.

William B Melton buying more silk. Who was it for, I wonder? 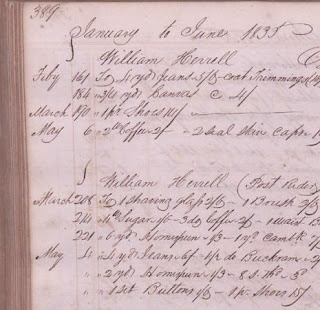 In this entry, William Howell, part of my earlier research on the Howell's, is identified as a Post Rider. 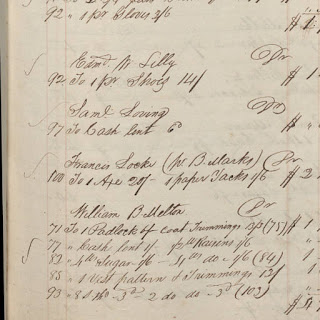 A big order from William B Melton. Below, William Solomon is making a purchase with Catherine Marks. 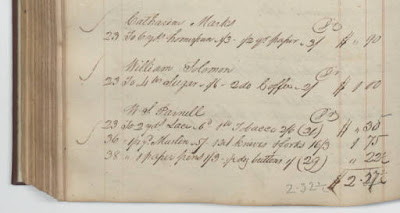 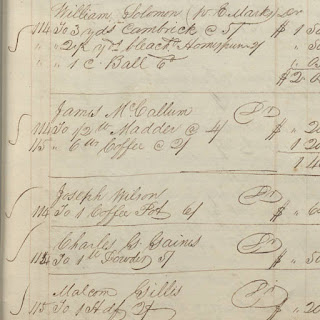 Here, William Solomon is making a purchase for "E. Marks". 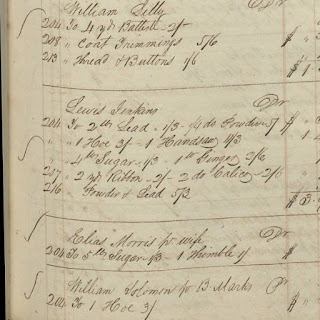 In this one, William Solomon is making a purchase for B. Marks.

William Solomon is my great-grandfather's grandfather. In someone else's research, I have seen his wife as "Tabitha Collins". In the census records, she is just Tabitha Solomon. In other research, she is Tabitha Marks. I have a tendency to believe that "Marks" was the correct maiden name for her, due to William Solomon's involvement with the Marks family. He was probably their son-in-law. I have found no proof, connection, or involvement with any Collins family at all.

While ledgers like these would offer a definitive proof of nothing, they can offer many hints and clues that bring us to our own conclusions. While it is interesting to see what our ancestors purchased, it also offers a glimpse into how they lived. Groups that require proof of ancestry, would probably not allow store journal entries as proof of lineage, but for personal benefit, you can accept that someone named as a relative in the journal, was in fact a relative, or that someone referred to as "Miss" was a single, never married woman.

Dr. Francis Kron treated these families that lived along the Yadkin/PeeDee River. I am now researching his records for mention of them. His observations are lending credence to speculations and corroborations to conjecture.

Posted by Jobs Children at 7:58 AM