The Brief Life and Tragic End of David Rudolph Melton

David Rudolph Melton was the son of William Jones Melton II and Eliza Jane Snuggs Melton. He was the grandson of Davidson "David" Melton, the long living patriarch of the Swift Island area and one of the sons of John Melton, Sr. of Montgomery/Stanly County.

He first shows up in the 1900 census, mistakenly transcribed as "Randolph".

In the Marriage records of Stanly County, North Carolina, is  a license for the marriage of  Rudolph Melton , 19, son of W. J and E J Melton and Maggie Kindley, 24, daughter of George and Betsy Thompson, on August 30th, 1907.

Prior to that, Maggie Thompson, age 20 daughter of George and Betty Thompson was married to Lewis W. Kindley, 23, son of Albert and Susanna Kindley on December 15, 1900.

Shortly after this census, we have David Rudolph Melton's Death Certificate:

Only 22, and a 'Railroad Brakeman' he passed away in Salisbury at the sanitorium on June 29, 1911. "Both Legs ....off. Death due to shock. Railroad accident, cut off by train -accidental", was the written under cause of death. Three local papers reported on the horrific accident.


The Charlotte Observer reported the story this way. "An unfortunate accident occured at New London shortly after noon today, when Mr. Rudolph Melton, a brakeman on the Yadkin Railroad, caught his foot in a guard rail, and was caught beneath the cars, losing both legs. He was hurried to Salisbury on a special train and taken to the Whitehead-Stokes sanatorium. The injured man was accompanied to Salisbury by Dr. T. A. Haithcock of New London."

The Greensboro Daily News, from Greensboro, North Carolina, July 1, 1911 edition, reported the tragedy a little differently: "INJURIES PROVE FATAL TO FIREMAN RUDOLPH MELTON
Spencer, June 30    Following injuries sustained by being ran over by his own train at Norwood yesterday afternoon, Rudolph Melton of Spencer, died at the Whitehead-Stokes sanitarium in Salisbury last night. Both legs were cut off by the wheels of a car under which he fell while making a coupling. He leaves a young wife and two small children."

The July 1, 1911 edition of The Richmond Times Dispatch, of Richmond, Virginia reported the story almost identically to The Greensboro Daily News. David Rudolph Melton is buried at Randall's Methodist Church near Norwood, North Carolina in the same cemetery as the grandfather, David Melton, that he was obviously named for.

His widow, Maggie lived a number of years longer, and never remarried.

In 1920,at 36,  she is living with the family of  Jack and Leona Fesperman, with relationship "sister-in-law" and employed as a nurse.

1n 1930, at 46, she is living with the family of E. Winborn and Dora Saunders with relationship "servant" and occupation as "Housekeeper, Private family".

In 1940, with age given as 58, she is living in the home of Mrs. Della Hagood,  on Brown Avenue in Albemarle, relationship "Lodger",   and her occupation is now a "Seamstress" at a Sewing Room.

Maggie Thompson Melton died on March 2, 1949 in Quewhiffle, Hoke County, North Carolina. She was 67 years old and Norwood, in Stanly County, was given as her residence. She had been diagnosed with Pulminary tuberculosis and had been admitted to the State Hospital in McCain on February 2 and according to the doctor's notes, had suffered many maladies due to the disease. 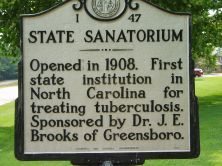 The hospital had been set up to treat tuberculosis. Maggie was buried in the Old Albemarle Cemetery on PeeDee Avenue. There are no records of the two small children mentioned in the obituary of her husband Rudolph. She had no children when she and Rudolph appeared in their only census together in 1910, so she had no children by her first husband Lewis Kindley, who was a boarder in her father's home in 1900.

The newspapers could have made an error and no children ever existed, if they did they were born in late 1910 or 1911 and obviously died as small children, perhaps twins. No possible candidates for the children of Rudolph and Maggie exist in either the Randall's Methodist Church cememtery or the Pee Dee Avenue Cemetery. Posted by Jobs Children at 5:51 PM