In my last post, I made mention of the problematic early life of Robert Thomas Kernachan, Jr. born abt 1827 in Lauderdale County, Alabama.

His father, Abraham, had died in 1833, when Robert was around 6 years old. Within a year, his mother had married his fathers younger brother, for whom he had been named, Robert T. Kernachan, Sr. Robert Sr., raised Robert Jr., his mother passing away while he was ending his teen years. Being the next to the youngest child, and the only son, a heavy burden was passed to Robert, Jr. and he did not wear it well.

While his father and uncle were born in Ireland and had traveled quite a bit, Robert Jr. was a Southern man, an Alabaman, raised in what luxury and wealth that time period had to offer. His father was one of the earliest landowners in the area and had built a large plantation. His uncle had added to the growth of the plantation, and had also built a mill, serviced by a railroad, and had bought stock in the growing industry of the railroads, and the cotton industry.

Cotton would continue to be an important substance in the family for years to come.

Robert Jr. was born into the affluence and attitudes of the time. It would be his undoing.

Robert Jr. was a veteran of the Civil War. He recieved amnesty from President Andrew Johnson and took the oath of amnesty in 1865. 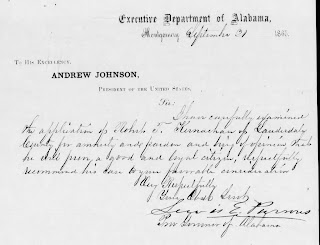 The letter written by his attorney to the President states:

To His Excelllency Andrew Johnson
President of the United States

The undersigned respectfully states that he is a citizen of Lauderdale County, Alabama and as such is an applicant for relief from....your Excellency's proclaimation of the  29th of May, 1865. In  behalf of his application begs leave to represent

1) That he is not under arrest by any authority for any offence whatsoever.......undersigned sole service....private soldier in February 1864 ....until paroled.


2nd The undersigned did not order the taking of Fort Morgan or Mount Vernon....

The document then fades into illegibility. Certain words are discernible: charge with disloyalty, aided in shooting or hanging any person for real or supposed disloyalty to the Confederate States (I believe it is saying that he did not participate in this.)

The document continues for several pages and through the legalese seems to state that Mr. Kernachan was a loyal citizen, but not leader in any offense, but just a gentleman soldier who took up arms in the latter days of the fighting to defend his state and county. His Uncle Robert/Stepfather would have been much too old to fight and therefore was likely not at odds with the government, who probably confiscated a great deal of the younger Kernachans' property.


Robert Jr. had been troubled before the war. He had gotten in several fights, charged with affray and even charge with attempted murder, of which he was found not guilty, but found guilty of the lesser charge of battery.


Afterwards, he was one of the many men in the South, who fell into depression and despair as their lives had been sent into a tailspin and turned upside down. The government was taking everything they had. They could no longer operate their farms and businesses, and could not see the end of the tunnel.


Robert Jr. did not live to see the end of the 1860's play out. On Friday, April 3, 1868 the Memphis Daily Avalanche of Memphis, Tennessee reported the following event in an article entitled ," The Tuscumbia Tragedy". 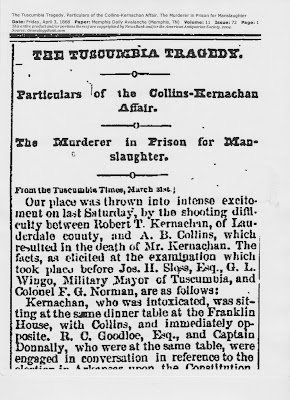