Seventy Dollars and a Horse

A wide variety of professions are found among the branches of my family tree, with farming being the most common, which I believe speaks for most searchers of ancestors past. Second place in my case I find a little odd. There were a large number of men if the cloth in my lineage, one, I've not made much mention of, the Reverend William Fincher. 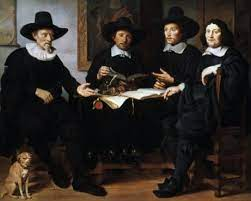 I may never have found out about Rev. Fincher had it not been for a distant cousin who found him first. This distant kin is a walking, talking Encyclopedia Britannica of history, and family history within its realm, to beat.
I had found out quite a bit of information on my second Great Grandfather, Frederick Fincher Starnes, including his roots back to Germany and his many business ventures and land purchases over 6 counties in two states, North and South Carolina. Yet, I could never figure out why he claimed to have been born in Georgia.
It was clear who his father was, as he actually lived with Finch in his older days and beside him in younger. I knew his mother's name, as he named her in his marriage license, though she was long dead before 1850. I knew his younger half siblings were the offspring of his father, Fred Jr.'s, second marriage to Elizabeth Thompson, so the origins of Finches mother, Sarah, was a mystery, until this distant cousin, who should write a book, broke down the wall.
Sarah Fincher, daughter of Rev. William Fincher, had married Frederick Starnes, son of Frederick Starnes, son of John Starnes, son of, you guessed it, another Frederick Starnes. One, possibly two, sons, were born of this union.
Below is the obituary for Rev. William Fincher, and explains exactly why Frederick Fincher Starnes was born in Georgia.

From The Southern Christian Advocate
In 1824, Rev. Fincher visited Monticella, Georgia, which was not his first trip to the land of Peaches. It appears most, if not all, of his large family accompanied him on the journey, including his married daughter, Sallie and son-in-law, Frederick Starnes. There was born Frederick Fincher Starnes, my third Great Grandfather, and this is why he always claimed to be born in Georgia. Finch grew up in what is now Union County, and as a young man in the 1850's, purchased land along the old Rocky River Road in the northernmost part of Lancaster County, South Carolina. His wife, Martha Louise Byram, grew up on the Union County side of the state line and they would live in Union before moving to Cabarrus County, where he would run a mill and own several large tracts of land, some of which crossed into Stanly County near Mission. They would join the old Rocky River Church and Martha and several of  their children are buried there. He would soon after marry the widow of his cousin John Starnes, son of Nathan T. Starnes, a lady named Abigail, who was anxious to join turn-of-the century Charlotte society, so they moved to Mecklenburg County in the Elizabeth section of Charlotte, where Finch would spend his last days. Finch had many business adventures, including investments in Albemarle, in Stanly County, and others, in conjunction with cousins in Asheville, NC, although he never lived there.
He was buried in Meadow Creek Primitive Baptist Church Cemetery near Locust, in Stanly County, NC, on one side of his second wife, Abby, while her third husband, a Misenheimer, is buried on her other side and her first husband, John Starnes, is buried a row in front of her. Abby had no children by any of her marriages.
Finches Grandfather, William Finchers, was born on March 30, 1865, in Rowan County, North Carolina. Some sources give his birthplace as Orange County, NC, and his family certainly did land there after arriving as many did, from Pennsylvania. However, I will go with Rowan as his obituary is the closest thing we have to a birth (and death) record for him and Rowan was pretty expansive in his day, and included present day Davidson County.
Rev. Fincher recieved a land grant of 100 acres, entered March 8, 1792 and issued December 13, 1798, on Carraway Creek in Randolph County, NC, Book 99, Page 177.
Around 1780, he married Mary Jane Grace, from Everleigh, Wiltshire, England, who had migrated from the UK to Pennsylvania at about 15. She was the daughter of  John Grace and wife Sarah Deare Grace. The marriage recorded in 'Hillsborough, Randolph County'. Their first son, Rev. John Finche, was born in 1784. Mary Jane Grace was Sarah Fincher Starnes' mother and my fifth Great Grandmother.
William Fincher first appears in census records in 1800, in Salisbury, Mecklenburg, and by this time has already aquired a large family with his young bride. It records a household of 11 people, and only 2 over 25. That was a large group of children.
By 1810, Rev. Fincher is listed in Captain Hoods section of Mecklenburg County and his family is again, a total of 11 people, with one man and one woman between 25 and 44, some of his older children have moved on and there are 5, 3 boys and 2 girls, under 10.
The 1820 and 1830 census records both found Rev. William Fincher in Mecklenburg County.
The Fincher family has been very well traced and while Williams grandparents are fairly acertained, the matter of which of two brothers was his father seems to be a bit of a conumdrum. I  will be looking into that further, but he was definately of the line of a Jonathan Fincher, born in Chester County, Pennsylvania, who died in Orange County, North Carolina around 1757. Although Rev. William Fincher was a Methodist Minister, his family origins were Quaker.
"Francis Fincher, a Quaker from England, arrived at Philladelphia, PA on July 28, 1683 aboard the ship, 'Bristol Comfort' accompanied by his wife Mary (Achelley) Fincher, his small children and servants."  from: "A History and Genealogy of the Miller Family and Allied Families", by Thelma Kay Miller, 1989.
One of those small children of Francis Fincher was named John, who married a Martha Taylor. John's will is found in Chester County, PA. John and Martha Taylor Fincher had a son named Jonathan, who married Deborah Dix, or Dicks. He was the one who migrated to North Carolina and his will is found in Orange County.
Among Jonathans eight children are found a Jonathan II and a Benjamin. These are the two sons wherein there is a controversy. Jonathan II is found in the 1790 census of Mecklenburg County, NC, while Benjamin settled in Randolph County. Both had sons named William. Some mix them up and claim our Rev. William the son of Benjamin, because he married Mary Jane Grace in Randolph County. However, I am of the belief that our William is the son of Jonathan Jr. There's about a 9 year age difference in the cousin Williams, with my William being born in 1765 and the other William being born in 1774. One is found in the 1800 census of  'Salisbury, Mecklenburg' and the other in Randolph County. As mine was born in Salisbury, it makes more sense to me that he is not the Randolph one. Cousin William moved to Ohio with his brother, Lemuel and died in Indiana in 1841. My thoughts lean towards my Rev. William Fincher being the son of Jonathan II and wife Shirley Wilcox.

Rev. Fincher, as a minister, was known to have travled often. Sometimes his family joined him, other times they did not, or a combination of both, some stayed and some traveled.  I believe this may have been what occurred when it was reported that Mrs William Fincher, (Mary Jane Grace Fincher), had passed away in Spartanburg, South Carolina in 1825, in her 62nd year of life. (Upstate Death Notices in The Charleston Courier, Vol 17 No 1. PHSQ, Upper South Carolina Genealogy and History). 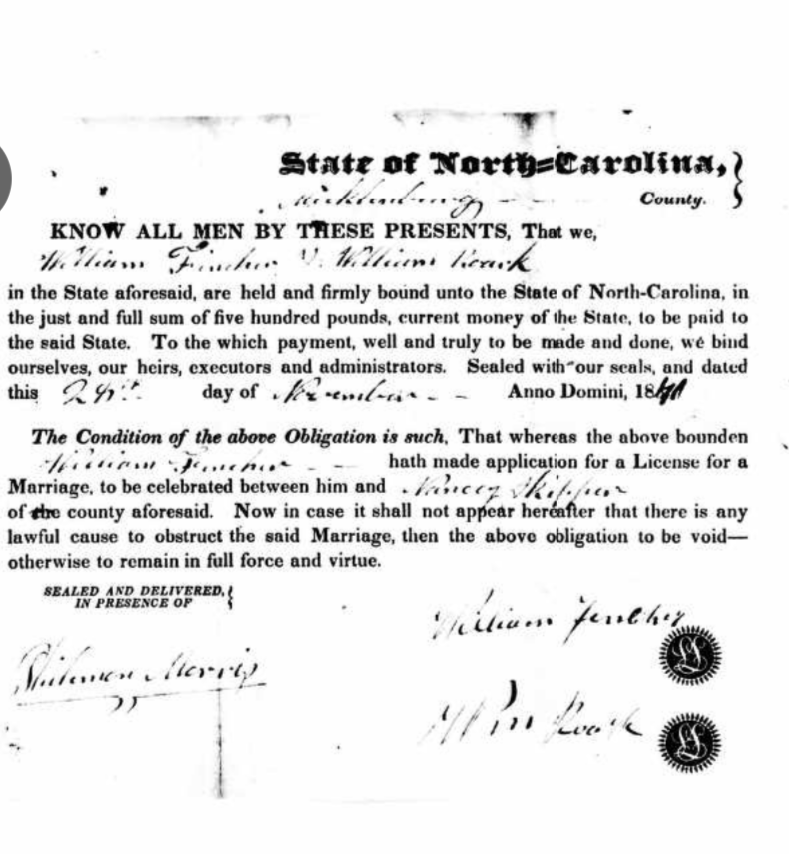 On November 28, 1840, Rev. William Fincher would marry his second wife, Nancy Skipper, in Mecklenburg County, North Carolina. She would become his widow in 1845. Nancy had been born a Henson or Hinson in 1810, in Anson County, North Carolina, so considerably younger than William. She was the daughter of Charles King Hinson III and wife Frances Stewart or Steward. She had married first to a Hiram Skipper and had a number of children with him. She was a widow when she married Rev. Fincher. One known child was born to this union, a son,  Wilson, who is shown with her as a small child in the 1850 census, and who does not appear to have made it to adulthood. Nancy Hinson Skipper Fincher passed away in 1890. 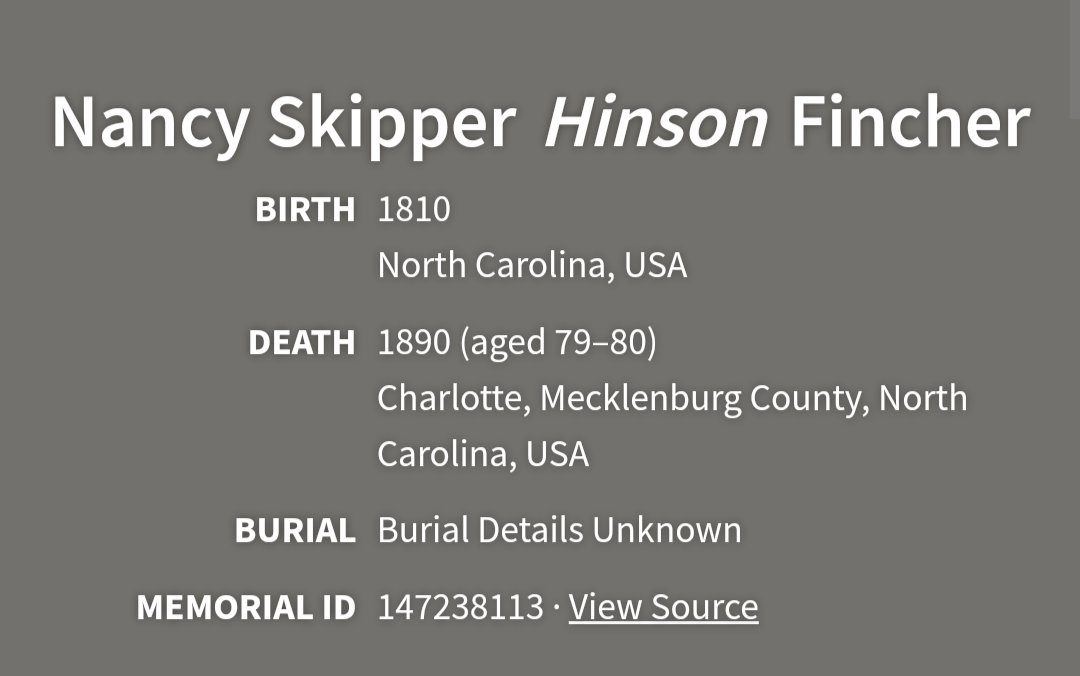