Ancestry DNA has a new feature wherein they have the ability to separate your DNA matches into groups, by which of your two parents the individual is related to you through, Identified as Parent One and Parent Two.  There's another category I refer to as "The Bin", where people have taken DNA tests for unknown reasons, and didn't start a Family Tree, or did with only 3 people in it, so there's not enough information for the program to access a common thread running through them. Ancestry deems this category "Unassigned", as the algorithms don't have enough information to assign the match to one side or another.
Then there's a fourth category named "Both Sides". These are individuals who are related to you more ways than one, and through both parents. 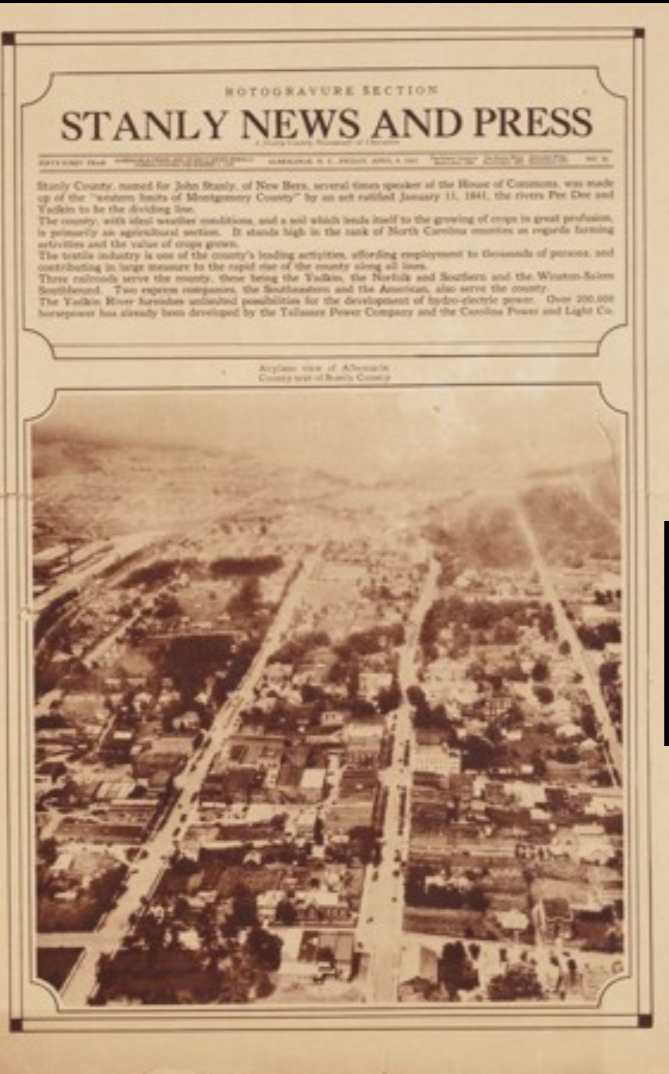 An historic aerial view of the town of Albemarle, NC from "The Stanly News and Press",  digitalnc.com.

The both sides situation can occur, explains ancestry, when the individuals, "come from a small population, (like on a island) that both parents belong to."
My parents are not related to each other. I checked that jack out through a program on gedmatch.com. Fortunately, my mother grew up in Albemarle, but her roots were primarily from the south side of the county, on the Rocky River, and across the river into Anson County. My father grew up in Aquadale in the southern part of the county, but his roots are from the western part of it, and into Union, Cabarrus and Mecklenburg Counties.
According to ancestry, I have 42,728 matches through Parent One. The most common names that show up among the family trees of those matches are Burris, Lambert, Almond and Hatley. Parent One is without a doubt my father.
I have 56,727 matches on Parent Two's side, my mother. The most common names showing up in the family trees of those matches are Smith, Mauldin, Blalock and Brown. Mind you, Mauldin makes sense here, as my grandma was a Mauldin, but I only have one very distant Smith ancestor to my knowledge, one very distant Blalock line, and not one single Brown. However, several of my Aldridge ancestors intermarried with a Brown family down in Cottonville, so I'm not a Brown descendant, just a cousin by marriage.
I have 8922 Unassigned matches who will hopefully work on their trees one day and become assigned.
There are 63 people who match on both sides of my family tree and their most common names are Smith, Almond, Cagle and Brooks. I believe this is just because of the sheer numbers of people with these surnames. I have no Brooks ancestors, either, that I have found. There must have been a large number of Brooks intermarrying with both my mothers and fathers ancestors. 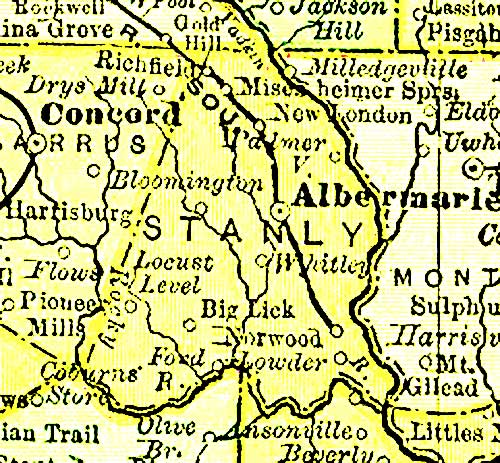 If one were to have made a trip around the circumference of Stanly County in say, 1880, that traveler would have encountered the following family names. In the northernmost part, near the borders with Cabarrus and Rowan, one would have encountered those descended from the early pioneer German settlements, in those counties,  like Ritchies, Misenheimers, Barringers, Arey's, Ridenhours, Isenhours, Millers, and Fraleys. Heading down into the county near New London, which was then Bilesville, there would have been  Biles, Parkers, Moss, Crowells, Harrises. Following the river down the easternmost border would have been the land of the Kirks, the Penningtons, the Latons, the Calloways, the Nobles, the Shavers, the Meltons, the Palmers and several of the names more common to the other side of the river; Thompson, Coggins, Russell, Hall, Morris and Blalock. My Solomon and Marks ancestors lived in this area too, but were not great in number.

Switching over toward the western end of the northern border, crossing just north of Albemarle,  one would travel through the land of the Carters, find more Palmers, Picklers, Kendalls,  Rogers, Eudys, Plylers, Manns, Holts, Culps, Sells, and Sides.
A path directly south out of Albemarle towards the Rocky River down through what is now Aquadale and Cottonville, one would first encounter families of Mabrys and Mauldins, Rummages, Foremans, Tuckers, Coopers, Kimreys and Simpsons, Boysworths, Tuckers, and further south, Crump,  Carpenter,  Davis, Aldridge, Lee, Brown,  McIntyre, Murray and Floyd, McSwain,  Hathcock, Reap, Green, Ross, and lots of Smiths thrown in here too.
If one drove east from this area, known as Tyson, one would encounter the Swaringens, the Hudsons, The Dukes, more Lees, lots of Allens, Walls, Avetts, Tysons, and another group of Kendalls. So many Shankles inhabited the rich area of the forks of the Rocky and Pee Dee Rivers, that this area became known by that name. Heading up river from that, before meeting up with those who inhabited the northeastern border, there would be the area of the Randalls, the Thompsons, and the Forrests.

The southern border of Stanly County is at least thrice as wide as the north. If one had decided to head west out of Cottonville, instead of east,  towards Leo and Morgan Mills, into what was Big Lick, there en masse would be found patches of Efrids, Almonds, Morgans, Brooks,  Hartsells, Coleys, Hills, Mortons, Burris's, Lamberts, Cobles and lots and lots of Huneycutts and Honeycutts. The reason being, in the very earliest of records of settlement in this area of Stanly County, there was not one or two, but eight or nine, patriarchs of the Honeycutt (and Huneycutt) line.
Further west still, even to the point where Stanly stops and follows the extensive border with Cabarrus County northwards, would be the land of the Furrs. This area was also firmly populated with many of the same families before mentioned in Big Lick, but also many Barbees, Brattains, Loves, Reeds, more Morgans, Mortons, Drys, Littles, Osbornes, and Stowes. Add a healthy dash of Cabarrus crossovers like Finks, Shues and Blackwelders and that's a hefty portion of the population. There was an additonal healthy population of Smiths in this area, too.
Sewing the final seam along the county line of Stanly County, we have the area in the middle of the border of Stanly and Cabarrus between the southwest and the northwest, traveling in towards the western side of Albemarle. This area took in the other side of Long Creek up to a portion of Bear Creek, a beautiful area of rolling hills. Leaving Albemarle and the other side of Lowder Mountain one would have found a grove of Burlesons. Here also would have been Whitleys and Underwoods, Bowers and Austins, Eudy's and Pages, Harwoods and Hatleys. A few smaller, but interesting families, like McClures, Herrins, Rices,  Cassels and Meggs, also lived in this area, but not in such numbers as the Burlesons and Bowers.

In the center of all these edges was located the town of Albemarle, the county seat. This was the home of the Hearnes, located on a plot of 50 square acres that had been part of the Hearne Plantation, in an area filled with creeks and where Little Long Creek made contact with Long Creek just after being fed by Town Creek, and shortly after joining with the Melchor Branch, Poplins Branch, Coleys Branch,  Rock Creek,and others. The movers and shakers from around the county had by then, 40 years past the founding of Stanly, moved into the newly former town of Albemarle, some, even, from the eastern side of the Pee Dee River, having abandoned the former county seat, when Stanly and Montgomery were one, called Lawrenceville. Among these were merchant Daniel Freeman, C. W. Wooley, S. J. Pemberton and others.
There remained, surrounding Albemarle, those who had also settled near where the Long Creeks merged,  and the larger Long Creek rippled on; the he Melchors,  Marshalls, Fespermans, Penningtons, a few Lillys, and Iveys, and yet more Smiths, Russells and Meltons.
From the square of  Albemarle looking westward, one can see to this day, Lowder Mountain. That is where a burgeoning tribe of Lowders had taken root, and their related families of Poplins and Cagles.

Albemarle is an island. Semi-isolated and insular farming communities throughout the county had intermarried amongst themselves, a handful of families each, with a rare and occasional dash of fresh blood coming in from outside the county, and outside the state, for generations. As the industrial revolution came to the south, railroads allowed for further and faster travel, and the merchant class expanded, many left the farming communities and settled in towns. This was further impacted by the daming of the Yadkin/ Pee Dee River, with High Rock, Tuckertown, Narrows, Falls, and the Norwood dams, displacing many families who had settled along the river. Many moved to town seeking work and a future. They brought with them their often intermingled and crossed-over genetics,and here, in Albemarle, began a new life in a small town, a 'small population', that both parents belonged to. The result is the 63 people that relate to me on both sides.
Posted by Jobs Children at 5:29 AM