For about three years, (I can't believe it's been that long), I've been pursuing the ancestors of my 3rd Great Grandfather, George Washington Turner (1835-1895),of Anson County, NC. Early on in my research, many, ..many..years ago, I had gotten to him and stopped. Let's put it this way, my grandfather, Lewis Theodore Davis, was aware of the names of his maternal grandfather, William A. Turner, and his great grandfather, G. W. Turner. In fact, he pointed out the beautiful antebellum mansion in Ansonville, NC, where G. W. had worked and lost his life. I was told that this was where his mother had grown up, taken in by the Smith family after the death of her father and grandfather, who had been in their employ.

The Messenger and Intelligencer 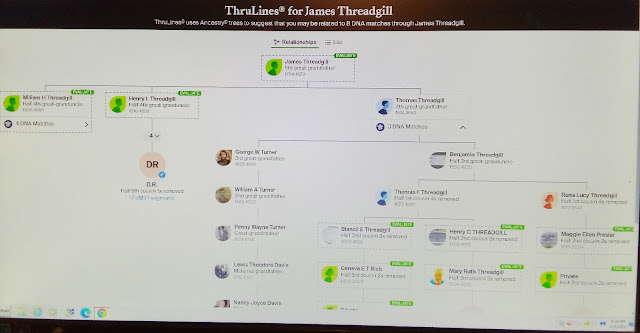 The search is not over, but here, I can visually see I share DNA with not only descendants of Thomas Threadgills legitmate son, Benjamin, just one of the sons he left orphaned very young, but also with descendants of his brothers, William H. Threadgill and Henry L. Threadgill. Now reinspired, I go to dig deeper.
Posted by Jobs Children at 8:09 AM