I like to know who people are. Take for instance, this 11 year old girl, whose name is transcribed as "Pency", living in the home of Reddick Drew of Anson County, NC in 1870.

It took having to look at the actual handwritten census pages to have found this one to start with. First, they have the family transcribed as Dress instead of Drew. They have his much younger wife, Mary, as an inferred child when she was actually Mary Levina Stegall Drew, whom he had married in 1864. The elderly gentleman named James, who was living with them was Mary's father, James Stegall.

Reddick Drew was unarguably entangled with my Turner relatives. My fourth Great Grandaunt, Martha Turner became his second or third wife. I say second or third, because I know his previous wife had been a Widow Gresham and Martha came after, but he may have even had a wife before Mrs. Gresham, but that, I've not been able to acertain.

He did have another wife after Martha, however, but I don't believe Reddick Drew had any actual children of his own by any of his wives. Yet, there seemed to always be children living in his household. 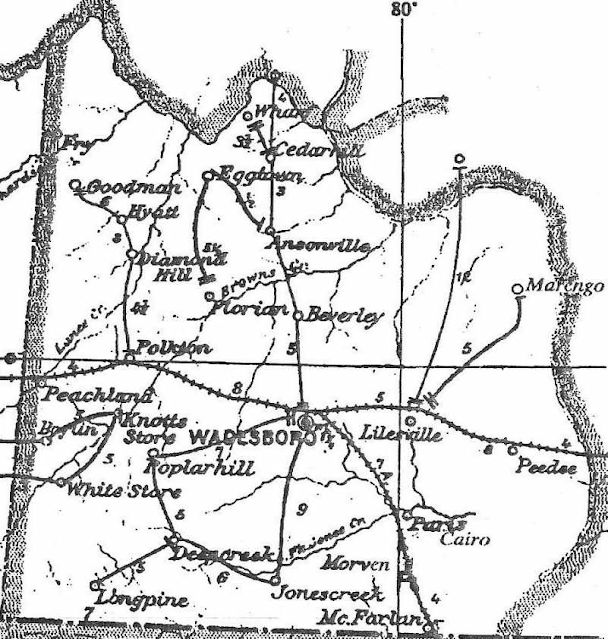 Then there is Pency, an 11 year old girl living in the home of Reddick Drew in 1870. No surname is listed beside her name, which usually meant this person shared a surname with the Head of Household. 1870 was the last year that relationships of the people in the home to the Head of Household, so we aren't told if Pency is the Drew's child or not. His wife was still young to be her mother.

Going forward 10 years, Pency is not to be found. Of course, being a girl, she could have certainly been married and changed her name by 21, or she could have died. It wasn't unusual to die young in those days.

It was never a given to find someone still living 10 years ahead, yet, if they were 10 or over, we know they were living, somewhere, 10 years back. But not only could I not find Pency 10 years ahead in 1880, I couldn't find her 10 years back, in 1860. In fact, I didn't find anyone named Pency, anywhere, at any time. Except for in the 1870 census of Anson County, NC. Most of the Pency's were African American, showing up by name in the census records for the first time, and with a quick look, most of their names were not actually "Pency", but either Penny or Jenny. But then I found a curious Pency,  in the same area, living just two houses below the Drew's. To top it off, she, too, was 11 years old. 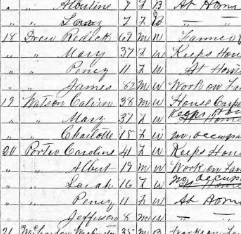 My theory is, there was no Pency Drew. I believe Pency Porter, daughter of neighboring widow, Caroline Porter, was the same child in the house of Reddick Drew. Perhaps she went to the Drew house periodically as an employee, to help Mrs. Drew clean, or help in the garden. Eleven years olds in those days, still fresh from the tragedies of war, did work, both for their families, and as employees of others, simply for survival.

And like the other Pency's, this childs name was not acutually Pency. They all seem to be the victims of  Mr. J. P. McRae's. the census taker or 'Marshall', neat, but misread script, or possibly his bad hearing, because 'Pency's" real name was Genie or Jenny, short for the more formal Mary Eugenia Porter. It wasn't just her name that was incorrectly transcribed, but in the Drew household, the surname had been incorrectly transcribed as 'Dress' and the families race was transcribed as 'mulatto' or "M", instead to the 'W' for white, as it should have been .

Also to be noted from the above clipping, is the family in between the Drew's and the Porters, Calvin Watkins. In 1850, three Watkins boys were living in the home of Reddick Drew, and their mother, Catherine, was living next door. I have learned from a descendant of Calvin Watkins that he actually worked for Drew, on the plantation. Reddick was single at this time. He would marry Martha Turner the very next year. Julia Ann Axum was his border, not his wife, and she was not a Drew. Cornelius, 17, was probably her brother, but Jonas was her son, as would be revealed by future research. So the idea of neighboring children being found in the Drew household was nothing new. 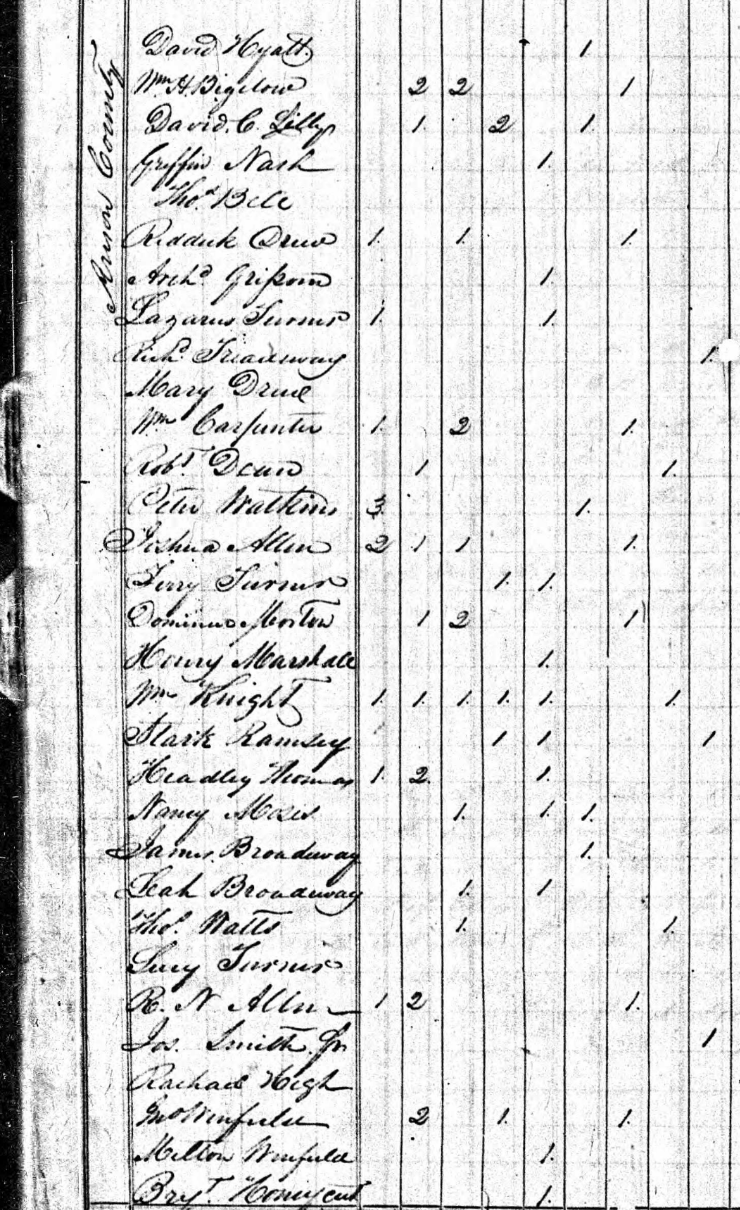 Going back even a decade beyond this last one to 1840, the neighborhood begins to look like a whole family reunion of my gene pool. I see Griffin Nash, who married Jemima Winfield, my several degrees of Great Grandaunt, and Reddick Drew, who was at that time married to the widow, Elizabeth Gresham/Grissom, and her son, Archibald next door. Next is Lazarus Turner, my 4th Great Granduncle, and brother of Drew's future wife, Martha. Two spots down is Reddick's widowed mother, Mary Drew, then William Carpenter, whose daughter married Lazarus Turner, then Peter Watkins, whose sons were living with Reddick in 1850, there's Domick Morton, who I will be blogging on soon, who is related to my Morton line, and Terry Turner, who I believe is tied in to my Turners, then Henry Marshall, who moves to Albemarle and Stark Ramsey, my 4th Great Grandfather, and James and Leah Broadway, related to my two Broadaway lines, that I hoep to explore soon. New the bottom are  John and Milton Winfield, sons of Edward Winfield and nephews of the above mentioned Jemima Winfield Nash and my 4th Great Grandmother, Sarah Winfield Howell Davis. In between are families like the Highs that will intermarry into my Davis line, and R. N. Allen, who I find all over the deeds and records of my family tree as a neighbor and freind.

So Reddick Drew played heavy in the neighborhood, and often took in, or employed, neighborhood kids.

Mary Eugenia 'Genie' Porter was born December 8, 1859 to George Thomas Porter and his wife, Caroline Throgmorton Porter. She was the fourth of their 5 children.

Her father, George, worked as an Overseer on the farm of Thomas Martin in the area of Red Hill between Ansonville and Burnsville. He 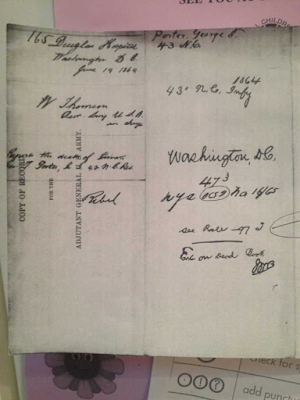 He enlisted in the Civil War, was taken as a prisoner of war, and died in Washington, DC in 1864. So the Caroline Porter who lived near the Drew family in 1870 was a Civil War Widow.

Mary Eugenia would live into adulthood and marry another victim of an embarrassing transcription.

On a spring day in May of 1884, she married Charles H. Harrington, son of Johnson and Catherine. The transcribers, however, have her marrying Charity H. Harrington. No, they were not Anson's first gay marriage. Charlie was a man.

The Harringtons remained in Anson County and raised a family of 8 children, shown above in the 1910 census, less one, who died young.

The family of Charlie and Genie who lived to adulthood were: 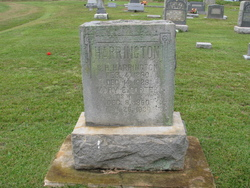 They were buried at Red Hill Baptist Church, not far from where they had grown up and spent most of their lives. Pency has been found.

Posted by Jobs Children at 5:28 AM