In Turn-of-the-Century Stanly County, North Carolina, people like Jenny Simpson did not exist, not in the family trees of the local movers and shakers, or in the Christmas stories told around a snapping fire on a crisp day and Grandma's house while the ham baked. Did not exist in people's facades of their family story, except for the fact that they actually did and Jenny did. Jennette "Ginny" Simpson existed. She was born, she grew up, she married, she separated, she worked, she lived, she breathed, she died.

Born sometime in 1895, Jenny came into a very unfortunate situation. The youngest child of Laura Simpson,  she was in a worse scenario than even her older siblings. Laura Simspon was the mother of 4 children, all of them born out of wedlock, all to different fathers. Laura, herself, was a fatherless child. While the name of her own father was lost to time, thanks to bastardy bonds and other records, the names of her 'baby daddys" are known.

Her oldest daughter, Mamie, was the daughter of a man named Richmond Blalock. Second born, Daisy, was the daughter of George Andrews, who was also the father of Laura's youngest brother from her mother, Nancy, a boy named Thomas. Only son, Odum Asberry "Bud" Simpson, was the son of a Rowan County businessman and blockade runner named William Robert Krider, who would supply the illicit alchohol for Laura's "Blind Tiger", a bootleg and brothel located between Rocky River Springs and Cottonville, in the southern part of Stanly County, North Carolina.

Jenny's father was also in the business of selling untaxed alchohol, and in pretty much the same area. He had a different clientele than Laura Simpson, to be sure. He was a man named Doctor "Dock" Lee, but he was not a doctor. Dock Lee was of African decent and had been born a slave in 1842. Therefore, Jenny was of mixed race.

Many people, when researching their family trees, get stuck in brickwalls when there are things they just can't understand, because they enter on the assumption that people "back then", were above reproach, chaste, and without blemish. Women did not have children out of wedlock, but that is untrue, many did. It was considered horribly shameful, but it happened, in surprising numbers, especially in the years after the civil war when there was an abundance of widows and orphans and a shortage of men. The greatest fallacy, however, is that white women did not have mixed race children. In the years before and after the Civil War, and especially into the years of Jim Crow, that was the greatest sin that a white woman could commit. But it happened, not in great numbers, but it happened, in Stanly, Montgomery and Anson Counties, as well as every other county and state around. There were not many, they didn't number in the hundreds, but they did number in the dozens and Laura Simpson was one of those women.

She was 38 years old upon the birth of  her last child, Jenny. The newspapers of the time described Laura as 'notorious and 'degenerate'. By the time of her arrest in 1904, she had committed every social taboo known to the people of Stanly County, especially those for women. They could think of no one worse.

But who was Dock Lee and how did they meet?

Dock Lee was born in 1842, most likely somewhere along the northern end of Richardson's Creek, not far from the Rocky River near the Anson and Stanly County borders. His parents were Green and Ellen Lee and he was born into slavery. Many boys, and even some girls, during this time were named after doctors, doctors who treated them, or had delivered the child, it was a trend. So, that's probably where his name came from. He was not a doctor.

What he was, however, was a well-respected leader among the Freedmen, or the first generation of free African Americans in the community. He was most likely a looker on top of that, judging from his popularity with the ladies.

He first married Harriett Winfield, daughter of Robert and Sarah Winfield. The Winfield plantation of Peter, then later, his son Edward Winfield, was also located along the Rocky River on the Anson/Stanly County border. Harriett seemed to be the love of his life, because he was with her the longest, and she bore him a houseful of children.

After Harriett's death in 1897, Dock married Ellen Hall. That marriage was not a happy one.

In 1905, he married Ada Tomlinson, after his divorce from Ellen. 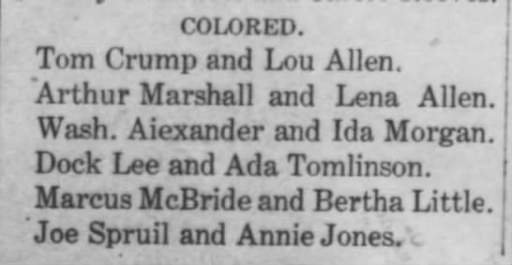 But Dock had relationships with other women, and fathered other children, born outside of wedlock. Besides Laura Simpson, there was supposedly a Cora Daniels, Louise Lee, and Laura Tatum.

The reason we know that Dock was pretty prominent in his neighborhood could be based on just the shear number of newspaper articles who mentioned him, his family, and his life, some good, some not so good. Many people of European heritage got no mention during this time of Jim Crow, but ol Dock gained mention in the press over 14 times, just in Stanly, including notice of ill health and an obituary, at a time when many of the white citizens of the era didn't garner a mention or obituary, so he was well known. 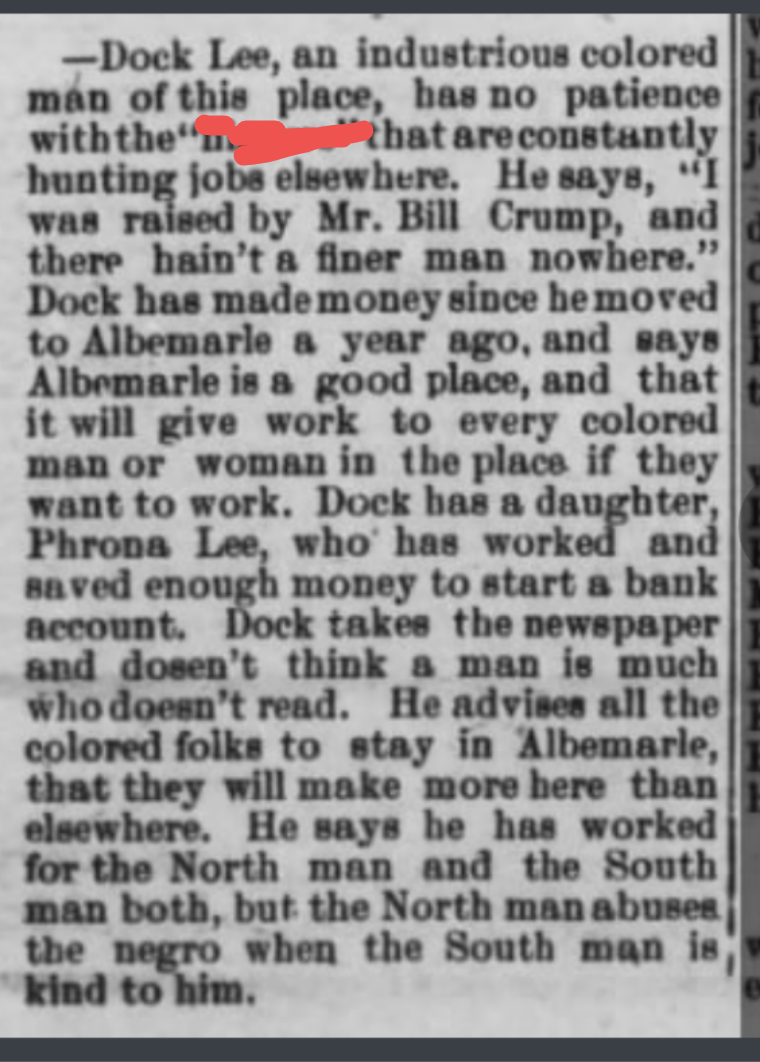 The language of the time was vile and prejudiced at best, but this 1903 article quoting Dock Lee can give one an idea of his personality and his acumen at giving his 'audience' the impression that would get his name in the papers. I don't really think this was how ol' Dock felt, but he seemed to be a master of manipulation and knowing what to say and when to say it. That was the name of the game in 1903. 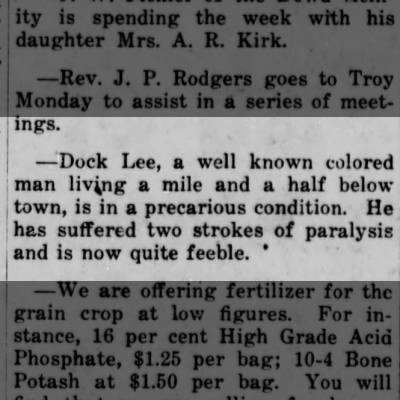 The papers also reported that Dock Lee had a stroke in September of 1912, and died later that month. 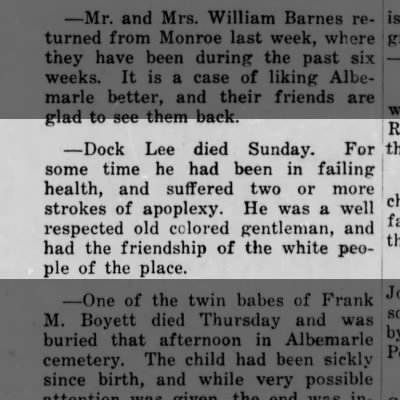 But how did he know Laura Simpson and how did they come together? That we will never know, but it's very likely that their occupation and involvement in retailing, or the sale and distribution of illegal alchohol, may have had something to do with it. In the above clipping, both Dock Lee and Laura Simpson were in court together charge with retailing. This was in 1910, two years before Dock would pass away and four years before Laura did.

So Jenny was born in 1895, in this society of bootlegs and brothels. In the course of society, this was as low as Laura could sink. There was nothing worse in the Jim Crow era as a white woman giving birth to a nonwhite child. Laura was 38 years old when Jennette, her last child was born and Dock was 63. This was the year he married Ada Tomllinson. Thirty-eight in 1905 was more like 58 in 2021. Laura was probably well-worn and aged out, from years of alchohol abuse, and perhaps, just from the hard life she had led as well, although she was still well within her child-bearing years. I harken the 'wear and tear', akin to what we might see on a modern drug addict, a meth-head or crack-head type, where the substance abuse has aged them to a point of hagardness and disshevelment, adding decades to their appearance. This may have been why the newspapers spoke of her in terms that would lead one to think that she was much older than her actual years would convey.

Laura and Jenny were no where to be found in the 1900 census. They were probably together, either hiding out, or just living on Laura's three acre property, that was owned by Bob Krider, her supplier, a place the census taker may have just not wanted to be seen. Her older children, Mamie and Bud, were living near Spencer in Rowan County with Krider, and Daisy was living with a Blalock family, the brother of Mamie's father, in Anson County, where she was working as a housekeeper.

So, Jenny (or Ginny) , first shows up in the 1910 census. She is listed as 20, but was actually only 15, a mulatto, and working as a servant. She is living with her sister Daisy, and brother-in-law, Filmore Aldridge. As the informant for the household, it is no surprise Filmore listed her as a servant and not a sister-in-law. First of all, there is no doubt she worked on the farm and helping Daisy with the children, there were five, 8 years old and under, including newborn, Lillian. Primarily though, it would have been difficult, disturbing and complicated to explain her actual relationship in 1910. Things have changed a great deal in 111 years. That kind of relationship did not exist in 1910, except for the fact that it did.

Where was their mother Laura? Why, she was in jail. It was rather surprising that Uncle Filmore, who left behind a rather troubled reputation, had taken young Ginny in, but he did, which proves there were more sides to Filmore than meets the eye. 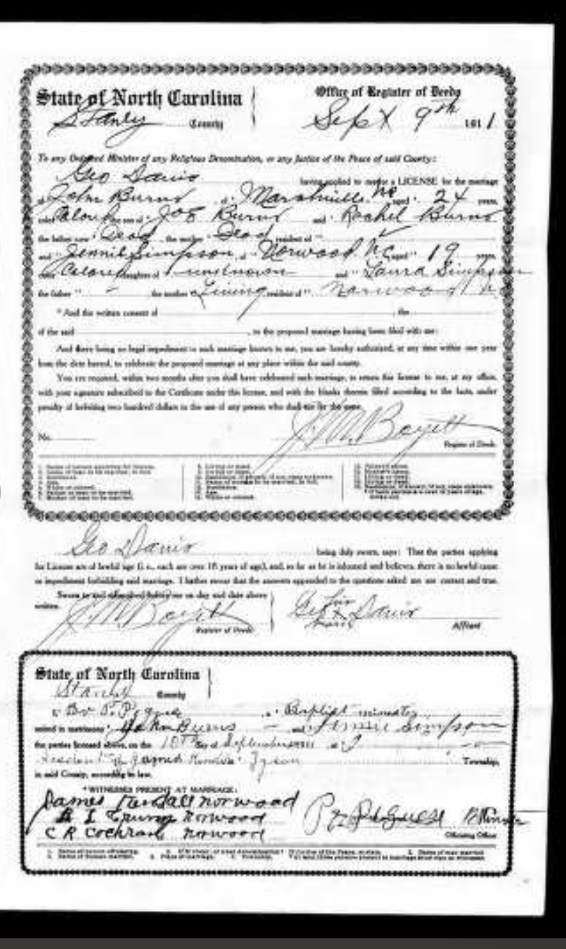 On September 11, of the very next year, Jenny would marry. Now, they were passing her off as 19, when she was actually 16. George Davis, the brother (half-brother to be exact), of Filmore Aldridge, applied for the marriage license, of Jenny Simpson, daughter of Laura Simpson and father unnamed, (written unknown), and 24 year old John Burns of Marshville, Union County, son of Joseph and Rachel Burns, both deceased.

John W Burns was the son of Joe Burns and Rachel Parker Burns and was born in Anson County. He had later crossed over into Union County and there had married Jenny Simpson. John was buried as a Veteran and would serve in World War I.

The marriage does not appear to have been a happy one, as in 1920, Jenny is working as a cook at a boarding house in Badin on Falls Road, catering to those working in the Aluminum Plant that would become to be known as Alcoa, and in the town, that was at the time considered part of Albemarle Township, but would soon be named Badin and given its own Post Office.

Jenny had moved to Durham, NC and was living with some folks she had met at the aluminmum plant, apparently. Now going by her formal name, Jannett. She was working in a factory and again was adjusting her age. Only upon death was it nailed down.

Her husband, John, had returned to Union County after his stint in the army, and some time in New York. He was living with his sister and her husband. Jenny had given her marital status as single in 1930, and John gave his as widowed. I don't believe they liked each other very much at this point. Neither would live to see 1940 and both would die young. 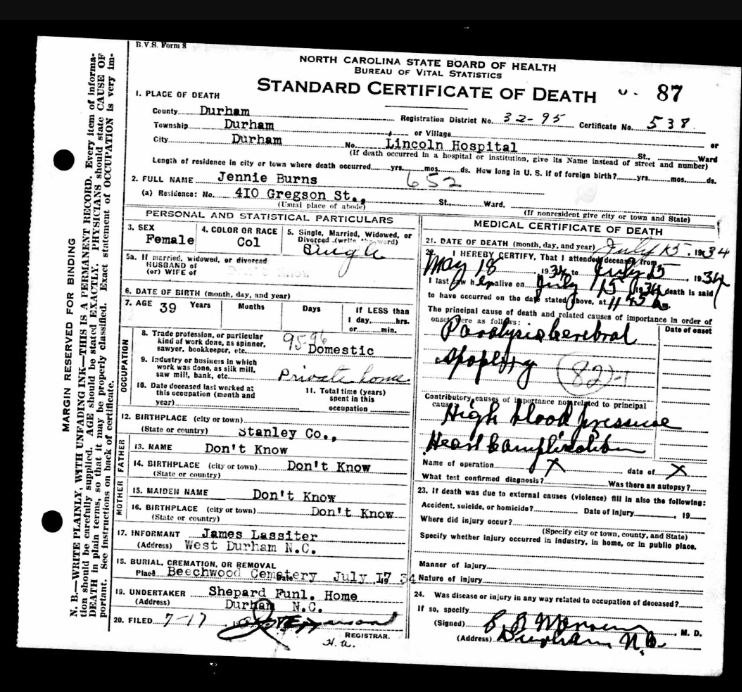 Jenny died on July 15, 1934, of Cerebral apoplexy and paralysis. She had high blood pressure and heart trouble. She was only 39 and never had any children.

Jenny was buried at Beechwood Cemetery in Durham, North Carolina. A sad ending to a short life. 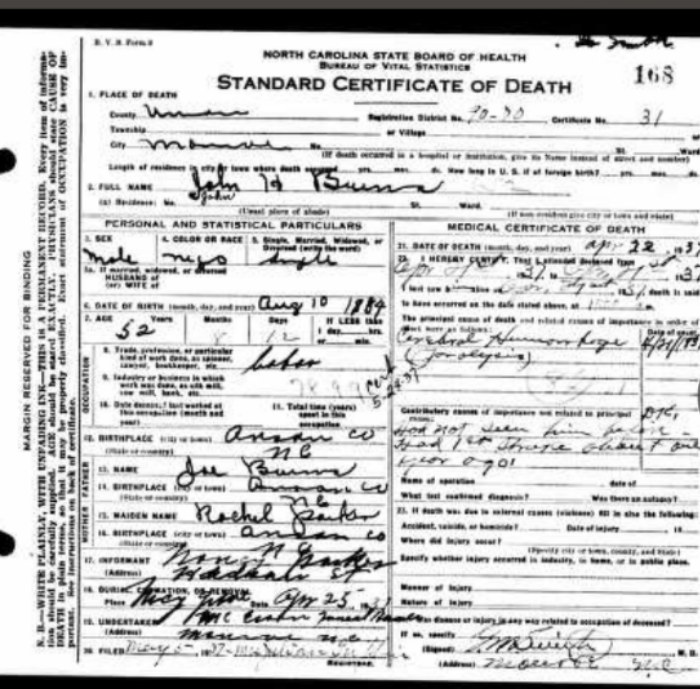 John Burns died April 2, 1937 of a cerebral hemorrage. His sister, Nancy was the informant and he was buried in Monroe.

Posted by Jobs Children at 5:37 AM