Playing the Waiting Game - or - Adventures in DNA

In researching my Turner roots, I discovered that my 3rd Great Grandfather, George Washington Turner, had achieved his surname through his mother's line, not his fathers. As of this moment, we have no idea who his father was, so I have been researching his mothers roots. We are, after all, still Turners, just not down the paternal line.

After blogging about my Turner research,  I was contacted by another who had been researching the same branch of  Turners, a distant cousin of mine. She got me in contact with some other distant cousins I had never met, who actually still lived on property that had been in the family for quite some time. She told me there was an old homeplace down the road, and in the homeplace, portraits of George W. Turner, his wife Wincy Elizabeth Morton Turner, and a Family Bible. I made contact with my unknown family, who are now treasured family, and wrote about this discovery in The Treasure Chest.

And if only to make this adventure more of a blessing, my cousin who lived on the old family lands, and who co-owns the original lands of G. W. Turner near the church where G. W.  is buried, with his siblings, agreed to take a Y-DNA test for me through Family Tree DNA. He is a direct male line to George W. Turner. This test goes from father to son for generations. While it will most likely not nail down the exact father of George W. Turner, we hope that it will give us a clue as to the family line of his father by identifying a predominance of a certain surname in the pool of closest genetic matches.

The reason for this post is that I recently recieved an email from Family Tree DNA stating that they had recieved the test. Now is the waiting game until it is processed, which should take a number of weeks. It all depends on how many people recieved the tests for Christmas and sent them off at once to be processed.

So there, but that is not all. I have a prediction.

George Washington Turner, was by all accounts, a good man. He was loved by his maternal grandfather, James Turner, who died in 1843, and made accommodations for the boy in his will. So he inherited his mothers share of his grandfather's farm when his mother, Mary, passed away. He married well, to the daughter of a well-respected minister, Rev. Sammy Parsons Morton, who had helped establish several Baptist Churches within a multi-county area. George W. Turner, himself, was instrumental in establishing Red Hill Church, near where he lived, and served in several capacities there. He and Wincy raised a large family, and amongst them was one of his younger sons, William Alexander Turner, whose daughter, Penny, became my Great Grandmother, living into my own lifetime. I remember her. 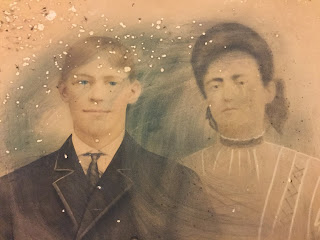 One of George's Uncles's, the oldest, Axom Turner, had served in the War of 1812. As a result, he recieved an alottment of land in Alabama, and with what I've discovered was a large flow of young settlers from Anson and surrounding counties to Alabama in the 1820's, he relocated there. A descendant of Axom Turner has participated in a Turner DNA study. And this study can tell us the origins of our ancestor, James Turner.  I will get into that test later, but one thing to note is that it follows the path of the family that I believe is the family of Jame's wife Susannah. In fact, I had suspected who she was from my research, before I discovered in the family bible that James's wife was indeed named Susannah. The individual whom I suspected she might be, was named Susannah.

But the one thing I do NOT expect to find is the surname of George Washington Turner to be Turner.

But I do have a possibility in mind. This post is to put my suspicions out there, before the test results arrive, to test my theory.

After the Civil War, all of the remnants of these two families packed up and moved to Porter Springs, Texas, and settled there. While I was looking into all of this, I discovered the name of a Charles Frederick Threadgill, who also had Anson County roots, and who lived among the children of Axom Turner and migrated when they did.

While exploring the family trees in which he dwelled to find his exact origins, I made an interesting discovery. I was related to these folks. The first one I opened stated that the person to whom the tree belonged was not a genetic match to me, but I matched with 3 of the trees she managed. The person who managed the tree had married into the family, but I matched actual descendants of C. F. Threadgill. I had to explore more of the family trees. Now, not everyone who has a family tree has taken a dna test, of course. And among those who have, at this distance, is not going to match all distant relatives. But some will. I found a significant number of matches among the descendants of Charles F. Threadgill. The amount of dna shared is not much, and it ranges from 4th to 8th cousins in distance.

For months now, I have been exploring how I could have a common ancestry with these folks who left the area I live in nearly 200 years ago!!!

The only common link I can find is that their ancestor, Joshua Hull Threadgill, owned property that joined that of my ancestor, James Turner. Most of the intermarriage between these Threadgill folks who left Anson, were with people who were not from Anson. Unlike the Turners, who seemed to write home for brides. But there are missing links in my family tree. The father of G. W. Turner is one of those unknowns.

Time will tell if I am right or wrong.

Posted by Jobs Children at 4:45 AM