My Theory on the Origins of Mary Anna Burris

Mary Anna Burris was my third Great Grandmother. That fact is not disputable. Other facts that are not disputable are that she was born in Stanly County, North Carolina around 1833 and died in the same in 1880. She married Charles McKinley Honeycutt on March 11, 1856 in Stanly County and together, they became the parents of 6 children, the firstborn being my Great Great Grandmother, Ellen Honeycutt Burris.

Where the mystery falls is who her parents were.

There is little doubt that she was a granddaughter or great granddaughter of the Patriarchial couple of Solomon Burris and Judith Taylor Burris, who settled in the area and spawned a huge family of Burris's and Burris descendants.

The first census that Mary Anna shows up in is the 1850, as it is the first one that lists the names of women and children. In this census she is living in the home of her future husband, Charels McKinley Honeycutt as a boarder.


I first encounter Mary Anna in the court records, however. The August 1844 Session of the Minutes of the Court of Pleas and Quarters has this entry:

"Sherriff to bring Ann Burris, orphan, to next term of court to be bound out, now lives at Susanna Huneycutt's."

This happened, as during the December 7th, 1844 session of court, we find this additional entry"

Then, of course, Mary Ann Burris shows up in the home of John and Sylva Honeycutt as a 17 year old in 1850 and 6 years later, marries their oldest son, Charles McKinnley Honeycutt.


By 1860, C M and Mary Ann Honeycutt are shown as a farm family with their first two daughters, Ellen and Evy.

By 1870, the family had welcomed 4 children as two sons had joined the family.


By 1880, Ellen was already married and 5 children remained at home. Mary Ann would die later that year, as her husband, "Kin" would remarry to Sarah Ann Hathcock Efird, daughter of Lloyd and Polly Hathcock and widow of Simeon Howell Efird on September 16, 1880.

As Mary Anna was still alive when the census was taken on June 16, 1880, so that narrows the time of her death between those two dates.

So, what was my theory? It goes back to that very first mention of her as a child in court in 1844.


She was the sister of John Honeycutt, who Mary Anna was bound to by the court and whose son, Charles M. Honeycutt, she eventually married.  Susanna apparently lived very near John Honeycutt, right next door, and even more likely, on land he owned. Maybe in a "tenant house".

1860 finds her living near her brothers John and Edmund, with her daughter Sylvia and a 14 year old girl Fanny Robbins. Another neighbor is a 70 year old Francis Robbins.


Ten years later, Susan and Silvia are listed living right next to C M Huneycutt and wife Mary Anna Burris Huneycutt and their family on one side, and the family of Margaret Perry on the other side.

The very next year on March 1871 Silvia Lovina Burris, daughter of Susie Honeycutt and Joshua Burris married next door neighbor, Caswell Perry, son of John and Margaret Perry. Lovina is 28, Caswell is 42.


This document is one that leads me to the conclusion of where the name "Burris" on my GGG Grandmother, Mary Anna Burris came from.

It doesn't appear that Susanna Honeycutt made it to 1880, when she would have been 75.
Caswell Perry and wife Sylvia Lovina Burris (Honeycutt) Perry have had 3 daughters, however, and are still living in the western Stanly community of Big Lick. 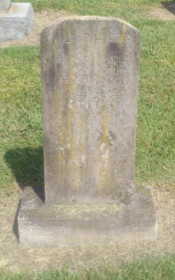 This marriage would last a little while longer and produce 3 children: James Alfred, Mary Ann and Manorah "Nora" Whitley, and then Sarah Elizabeth Perry Whitley would also die young, in 1902, at the age of 25. Her husband would marry a Great Great Aunt of mine, Flora Jane Aldridge, and they would have a large family together.

Third daughter, Sylvia Samara Perry, was the longest lived. She was born on March 10, 1879 and on November 16, 1897, she married Titus Monroe Tucker. They became the parents of 8 children and Samara would pass away on April 11, 1955 in Stanfield, Stanly County, at the age of 78.


Oddly, in the 1900 census, we find Caswell Perry living alone and giving his marital status as "Widowed". His daughters were married and the eldest already passed, but one person who was still very much alive was his wife, Sylvia Lovina.

The 1910 census shows the couple back together, living with their only living child, Sylvia Samira Perry Tucker, and her family.


Caswell and Sylvia Lovena Burris-Honeycutt Perry did not make it to the 1920's.

Sylvia Lavina Burris (Honeycutt) Perry passed away on July 23, 1915 at the age of 73, two months before her husband. She was also buried at Running Creek.

Now, back to Mary Anna. I fully believe that she was the daughter of Joshua Christian Burris Sr and Susanna Huneycutt. And not just Mary Anna. She had a brother, Joshua.

Back to the pleas and quarters. In the February Session of Court, 1844, before Anna was said to be living with Susan Honeycutt and then later to be bound to John Honeycutt in the August and December 1844 Sessions of Court, there was another entry. And it was very telling.

"Sheriff to bring 'Ame' Hunycut and Joshua Hunycut to next term of court to be bound out. (Huneycut or Burris)."

The above is what was transcribed in the book, but having the ability to look at the original script on a CD, it's not 'Ame' but Anne, and at the end of the statement, it clearly identifies the children's surnames as "Huneycut or Burris', meaning they went by either surname.

Then, in the May 1844 session, "Joshua Huneycutt bound out to George Cagle Jr, who gave bond."

What is certain, is that Susan Honeycutt's youngest daughter, Sylvia Lovina, is definately the daughter of Susan and Joshua Burris, Sr. She lists her father on her marriage license and she also went by both Honeycutt and Burris as surnames. In the census records with her mother, she is listed as a Honeycutt, but on her marriage license to Caswell Perry, she is listed as a Burris. 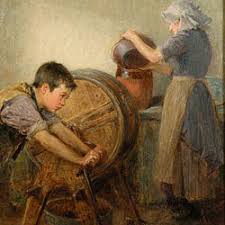 The "bounding out" system for children in the 1800's typically left children born out of wedlock with their mothers for the first several years of their life. A bond, referred to as a bastardy bond, was placed upon the father of the child or children, for their care until the reached the age to be able to be educated or perform manual labor. This was  a much younger age than we would consider in modern times, normally between 7 and 10, to end at age 18 for girls and 21 for boys.

So, in February of 1844, Anne and Joshua were ordered to be brought to court to be bound out. At this time Anne would have been 10/11 and Joshua would have been 8/9. Their surnames were noted to be Burris or Honeycutt, an ambivalence seen in records for person born outside of marriage.

Anna was said to be living with Susan Honeycutt in August of 1844.

She was bound to John Honeycutt, the married brother of Susan Honeycutt, who lived very near to Susan, in December of 1844. Joshua was bound to George Cagle, who also lived in the same community.

Susan's youngest daughter, Sylvia Lovina, is recorded as being the daughter of Joshua Burris. So, we know Susan was one of his mistresses. He had at least one other, Jane Murray, sister of my 3rd Great Grandmother, Priscilla Murray Aldridge. So, he was known to stray outside of marriage. He and his namesake son, both.

With these facts in hand, it certainly appears to me that Susan was one of Joshua Burris's long held mistresses. She named her son for him. All 3 children went by both Honeycutt and Burris. She never married.

The other theory is that Anna was the daughter of William Burris, who was the most mysterious of the sons of Solomon Burris, Sr. and Judith Taylor Burris. The problem with that theory goes back to the court records. The Burris/Honeycutt children were brought to court to be bound out in 1844.

As an aside, there could have been 4 children born to this union of Joshua Burris and Susan Honeycutt.

In the February Session of 1848, a John A. Honeycutt was brought to court and bound out to James W. Hartsell. In the 1850 census he was living with Wiley Hartsell. I am not so sold on this one. There is ambivalence in his surname. Susanna isn't mentioned. It's not sure where exactly this young man came from, it's just possible that he could be a sibling of Mary Anna too. The ages fit. 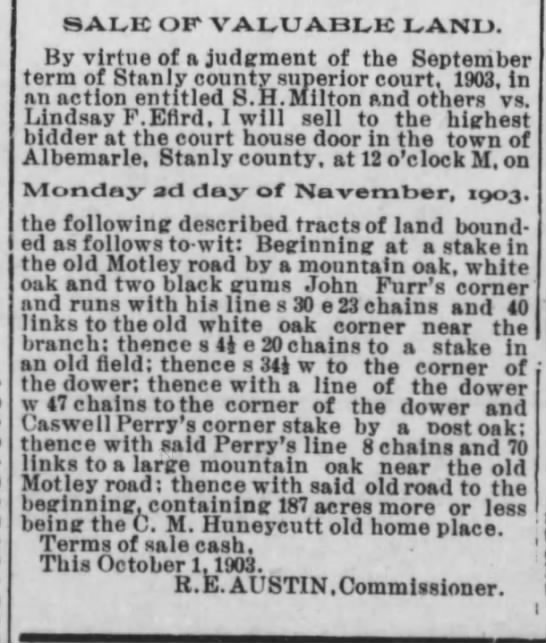 There may never be more known than this about Mary Anna Burris Honeycutt. There is little doubt she was a grandchild of old Solomon and she is definately my third Great Grandmother. If my theory is true, her marriage with C. M. Honeycutt was a first cousin marriage, and was fairly common in those days.

Then, her eldest daughter Ellen, turns around and marries another Burris. Maybe that is why David T. and Ellen look more like siblings than a married couple in this picture. 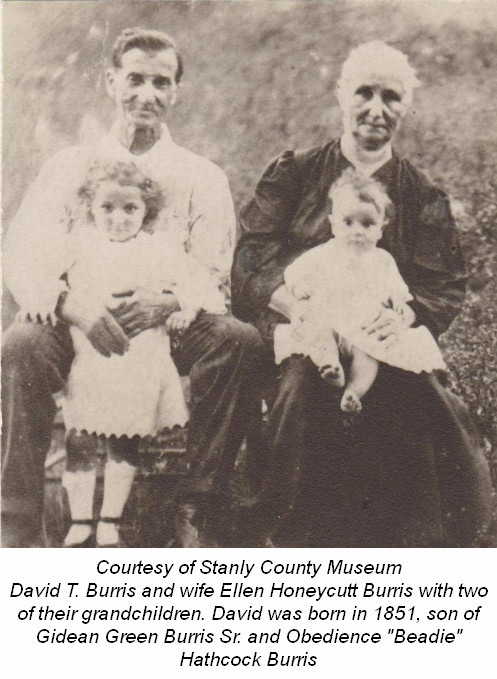 Posted by Jobs Children at 6:34 PM