Every October, at Pleasant Grove Baptist Church, in Frog Pond, North Carolina,  is held a reunion of the descendants of Solomon Burris, a Revolutionary War soldier. This was my second time to be able to attend. This year, I was fortunate enough to be able to attend with my Dad, who is the Burris descendant, in two separate ways. My Dad's Grandmother was Rowena Burris, who married Elias Marion Lambert. 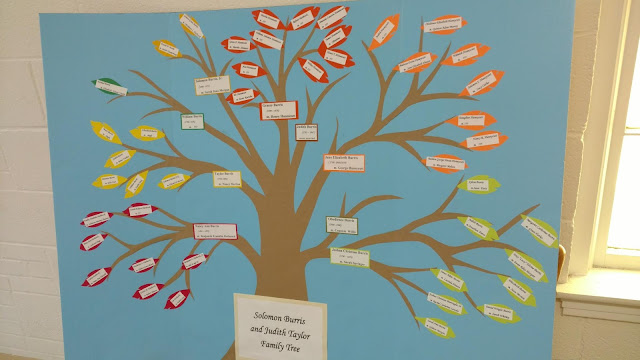 The above chart is an actual family tree created by the amazing Pam Holbrook, which broke down the children and grandchildren in a visually beautiful and comprehensive way. 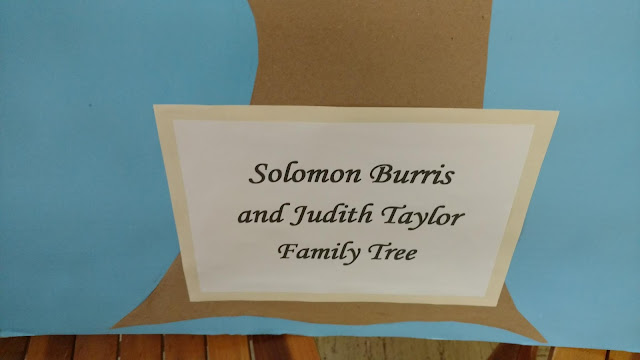 Solomon The First, and his wife, Judith Taylor Burris are the trunk of the tree.

It is popularly accepted that Solomon was the son of Joshua Burris (or Burroughs) 1735-1783 and Elizabeth Brookshire 1734-1787 who were from Southhampton County in England. There are records of  a Joshua Burris in Bertie County and in Anson County, prior to 1780, with a wife named Sarah. It is also commonly accepted that Solomon had brothers Joshua Jr. and James. One of them settled finally in Anderson County, South Carolina.

He married Judith Taylor on December 12, 1783, in Surry County, North Carolina. There seem to be no consensus on her parentage. I've seen her father as John, James or Robert Taylor and her mother as either an Elizabeth or a Nancy and surname Hudson or Herring. I would love to hear anyone make a case toward either one. I, myself, have no clue.

Most of the information we have on Solomon Burris comes from his 1832 Pension Application based on his service in the Revolutionary War. In this application, he states that he is about 80 years old and was born in Anson County. He said he had lived in Montgomery County "upwards of 45 years." (The part -West PeeDee- that became Stanly, his land grant being on Bear Creek). His proof of age was a family bible that his father had taken with him to Bertie County and his father was by this time deceased. He describes his entry into the war and participation in the Battle of Stono Creek.

Copy of Actual Document from Fold3

In the above photo, the third person from the right, sitting, the man with the man with the moustache, is Duncan "Dunk" Burris. He was the brother of Great-Grandmother Rowena Burris Lambert and would become the stepfather of my grandmother, Bertha Lemmons, who would marry Rowena's son Burley.

The Reunion hosted a guest speaker in period dress who read a list of Burris men who fought in the Civil War. She also spoke of the changing roles of women during, before and after the War. Unfortunately, I can't remember her name. I'm sure someone else who was there will help me out.

Member of the NC Militia in 1779, wounded at this battleBattle of Stono Ferry
From Wikipedia, the free encyclopedia
The Battle of Stono Ferry was an American Revolutionary War battle, fought on June 20, 1779, near Charleston, South Carolina. The rear guard from a British expedition retreating from an aborted attempt on taking Charleston held off an assault by poorly-trained militia forces under American General Benjamin Lincoln.
Background

The opening move in Britain's "southern strategy" to regain control of its rebellious colonies, was the December 1778 capture of Savannah, Georgia. This heightened concerns in Charleston, South Carolina, where General Benjamin Lincoln headed the Continental Army's southern command, and the British garrison at Savannah was about the same size as his own.
By mid-April, Charleston was reinforced by the arrival of South Carolina militia, and Lincoln decided to attempt the capture of Augusta, Georgia, which was defended by a smaller garrison of British troops and Loyalists. He marched from Charleston on April 23. When British General Augustine Prevost learned of this movement, he decided to counterthrust against militia forces at Purrysburg, South Carolina, just upriver from Savannah, marching 2,500 men out on April 29. The militia at Purrysburg, about 1,000 men under the command of General William Moultrie, fell back toward Charleston rather than engaging Prevost, and sent messengers to Lincoln warning him of the British movement. Prevost decided to pursue them almost all the way to Charleston.
On May 10, companies from the two forces skirmished near Ashley Ferry, about seven miles (11.3 km) from Charleston. Two days later Prevost intercepted a message from which he learned that Lincoln was rapidly marching back to Charleston, and decided to retreat. His army was slowed by having taken supplies en route, so he decided to leave a rear guard at Stono Ferry, between Johns Island and the mainland, removing most of his army to Savannah by boat on June 16. Prevost placed Lieutenant Colonel John Maitland in charge of the rear guard, which numbered about 900 men. A bridgehead was established on the north side of an area now known as New Cut Church Flats; this was meant to cover Stono Ferry. Three strong redoubts were built, circled by an abatis and manned by Highlanders and Hessians.
Lincoln, on his arrival in Charleston, decided to mount an attack on this outpost. Even though he commanded five to seven thousand men, he was only able to raise about 1,200 men, primarily from the poorly-trained local militia, for the expedition. General Moultrie led a smaller secondary effort to the east against a small group of British soldiers on Johns Island.
Lincoln deployed his troops after a night march of eight miles (13 km) from the Ashley Ferry, located in the present village of Drayton Hall. Immediately upon their arrival at dawn, they began struggling through thick woods. The Americans advanced in two wings; General Jethro Sumner led his Carolina militia on the right, carrying two guns, while their right flank was covered by a company of light infantry, commanded by the Marquis de Malmady. Continental Army troops, under General Isaac Huger, made up the left wing; they carried four guns into battle. With Huger was a group of light infantry under John Henderson, and it was these troops who, shortly before sunrise, made first contact with the enemy.
[edit] Battle

The battle began well for the Patriots. They engaged the British positions with small arms and cannon fire for an hour, at which point they advanced to the abatis. Of the Highlanders, two companies resisted until only 11 men were left standing; a Hessian battalion finally broke. Here Maitland shifted his forces in an attempt to counter the larger threat posed by Huger's wing. The Hessians rallied and returned to the fight, and reserves were brought across the bridge. Lincoln chose this moment to order a withdrawal.
[edit] Aftermath

The American loss in the battle was 34 killed, 113 wounded and 155 missing.[1] Among the dead was Hugh Jackson, brother of future President Andrew Jackson, who was felled by heat and exhaustion. Huger was severely wounded. The British casualties were 26 killed, 93 wounded and 1 missing.[2]
Maitland had decided almost a week prior to the battle to withdraw from battle; however, his action was delayed by a lack of water transportation. Finally, on June 23 he began moving towards Beaufort, although with little prompting from Lincoln's attack.
The site of the battle is still visible today, at the end of S. C. 318 near Rantowles.
-The above information on the Battle of Stono Gap and Solomon's Revolutionary War service was contributed by an individual identified only as "Prepin 57" who is genetically identified as my 4th cousin.

Solomon Burris and Judith Taylor Burris were the parents of 9 children.

On December 26, 1857 Joshua Burris, their son, gave the following list from the Family Bible:

Joshua Christian Burris, above, was another grandson of Solomon, Sr. He was an active charactor in the anuls of Stanly County and made multiple court appearances for a variety of business, civil and legal reasons. He was the son of Joshua C. Burris, Sr. and Sarah Springer. He married Rachel Catherine Lowder in 1867, but maintained a minimum of 3 families. The following is a list of his known children, some by Susanna Whitley, some by Rachel C. Lowder Burris and some by Frances Mary "Frankie" Huneycutt.


Joshua C Burris, Sr. was a son of the Revolutionary Veteran, Solomon. He also maintained more than one family, one by his legitmate wife, Sarah Springer, and one by his neighbor, Jane Murray.

The young life of Solomon Francis Burris was notably explained on his tombstone as being "taken by a tree". Solomon F. was a Great Grandson of Solomon the First, via Solomon Jr and Sarah Morgan Burris, his grandparents, then to David Green Burris and Sarah Ledbetter Burris, his parents. He married Eliza Mary Coley, daughter of Isaiah A. Coley, leaving her a widow with three young children, Rosa, David and Nancy Alice. His widow would marry "Coon" Crayton and have a very large family with him. The 1880 census Mortality Scheudules would list his cause of death as "Hemorrage".

The Whitley Family Tree connecting charactors in the Alec Whitley (Burris) story and their relation. All in all there were many Burris/Whitley family intermarriages. Also Burris/Huneycutt intermarriages.

The lovely, hard-working Pam Holbrook, without whom these Reunions probably would not happen. Pam is collector of all things Burris and is the artist who created the lovely trees I photographed in this blog and keeps the albums of photos and family interconnections. She has also done a tremendous amount of work along with Priscilla Clarke, John Burleson and others on discovering and documenting old abandoned cemeteries throughout the county.

This Branch shows that Obedience L. Hathcock Burris has her own limb on the Burris Family Tree. Her mother was Nancy Ann Burris, who married Benjamin Franklin Hathcock. As Nancy and Solomon Jr. were siblings, Gideon and Obedience were first cousins. This happened alot in small communities in the rural south when people usually didn't wander too far from the farm.

A wider view of the Nancy Ann Burris Hathcock Branch. Gideon Green Burris was most likely named for Revolutionary War Veteran Gideon Green, who lived along the Rocky River in Anson and Montgomery County in the later 1700's. What was his connection to the Burris family? Was he and Solomon the First just compatriots and friends, or were there genetic connections?

Posted by Jobs Children at 4:57 AM