I inherited my love of history and genealogy from both sides of my family, but being raised with my mother's family, and living with my maternal grandparents for awhile during my formative years, I identify the most with my mother's side of the family.

But my Dad is very much interested in family history, too, and has done quite a bit of his own research. He didn't have the convenience of online archives and scanned newspapers to aid him in his search, however. He did the legwork (old cemetaries, pouring through old courthouse records) and the earwork (listening to the recollections of the oldest relatives, which can be a little off-according to whom is talking).  Most of what I found he had for the youngest of generations-his grandparents and great- grandparents, ring true. But I'm finding some of the information for the generations beyond that to be a little off, either easily seen as incorrect, or we have the wrong Mary or John. Not really his fault, too many people named their kids the same old names as everyone else and in the area of the county where his paternal lines originated, there was a great deal of intermarriage between a small number of families.  While his maternal lines were from another county and more unique in the their naming patterns, his paternal lines were straight off of Stony Run Creek in Western Stanly County, North Carolina where multiple Burris and Honeycutt marriages took place, with a few Whitley, Efird, Hatley, Bowers thrown in for good measure. 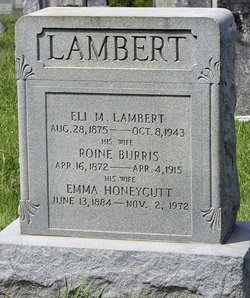 My Grandfather's mother was Rowena Burris Lambert, and this was the most evident Burris line we knew of.  She was born on April 16, 1873, in Stanly County and died on April 4, 1915 in Cabarrus County. She had a death certificate which clearly named her parents, David Burris and Ellen Honeycutt. It also gave her exact age, 41 years, 11 months and 9 days. My grandfather, her youngest child, was was born March 3, 1915. His mother died one month and one day after his birth. She died from a poisonous infection that occurred late in pregnancy, or just after childbirth and caused her kidneys to shut down: Uremic eclampsia, they called it, causing renal failure, acute nephritis.

Rowena (often misspelled as Roena) only appeared in two censuses, the 1880 as a small child, oldest daughter of David and Ellen, and then again in 1900, as a young mother of 4 children with 4 living, having been married only 5 years.


Although alive during the 1910 census, somehow the family fell under the wire that year and did not get enumerated. I am not sure why it only shows three children in the 1900 census. That is the year Roby was born, but it clearly states she was the mother of 4 children and that all four were alive. Roby only lived to be 2 years old and his tombstone at Bear Creek Primitive Baptist Church, where a number of the family are buried, clearly states that he was the son of E. M. and R. L. Lambert. I belived little Roby was actually a Robert and his tombstone gives Rowena's middle initial, although I do not know what it stands for.  Perhaps he was living with another relative at the time, since Rowena had several small children already.


Rowena, in her short life, would become the mother of 11 children.

My Grandfather was such a young child when his mother passed away, that he was sent to live with his Aunt Mettie, Rowena's younger sister. Mettie had married a Smith, and when Burley shows up in his first census in 1920 as "Burley Smith, nephew, age 5, living on Depot Street in Albemarle. The family had moved from Cottonville in Southern Stanly County to Albemarle to work in the textile mills. Rowena and Eli had already moved to Cabarrus County to work in the Concord textile mills when Burley was born there in 1915.


As a teen, they had moved back to Cottonville and Burley was living with his Aunt Mettie, who was now widowed.

They lived along the Cottonville to Norwood Road. My Dad has pointed the house out to me many times. It sits up on a hill and is still standing and occupied.


After Rowena died, Eli married a young widow, Emma Fairybell Honeycutt Eury, daughter of Tillman Franklin Honeycutt and Lucy Burris, and of course with names in her family of Honeycutt and Burris, she was a multi-layed relative of Rowena. Emma had married James William Eury who died in 1916 and left her with 3 children: Walter, Rosetta and Eziella.

Eziella died as a toddler in 1917, so when Emma married Eli on October 4, 1918, she brought her little son and daughter with her, who grew up with their stepsiblings.

Eli and Emma would have 3 children together:

With the two step-children, that raised Eli's brood to a total number of 16 children. They were competeing with the Duggars! Many turn of the century farm families were very large, however, creating an army for the two world wars, and becoming the parents of the future "baby boomers".

I wish I could have met my Great Grandmother Rowena, as I was fortunate to meet my mother's two grandmothers, but fate would not have it.