Maw Maw, where is Paw? "He ran off to Arkansas".

The above rhyme is one I have heard from the old folks of Stanly County, and has survived even to this day.

In my research of the old court record of  the case of Joyce Ann Fisher, and Wiley Monroe Barringer, I found the story of a love story gone wrong. Of the relationship of a young couple who lived on the border of Stanly and Cabarrus Counties in the reconstruction era of the 19th century and who had a daughter, but the relationship did not end in marriage.

Sadly, the young man married another shortly after his daughter was born and started a large family. He met his legal financial obligations, but apparently never looked back and showed no legal recognition, as often, but not always, happened during those years. 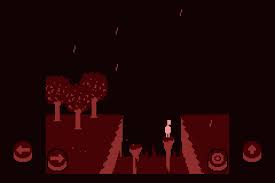 The mother of the child, Joyce Ann Fisher, lived with family, and later, her daughter and son-in-law, for the remainder of her days. She kept herself and her daughter up for awhile, apparently, running a boarding house and renting rooms, while her daughter Ada, found work at a young age in the Cotton Mills of the era.

Wiley Monroe Barringer and his wife BellaZorra or Isabell Zorra Page Barringer went on to have a large family of 11 children, which they raised in Cabarrus County, near Gold Hill, around the Cabarrus/Rowan County line, not far from the northern end of Stanly County. 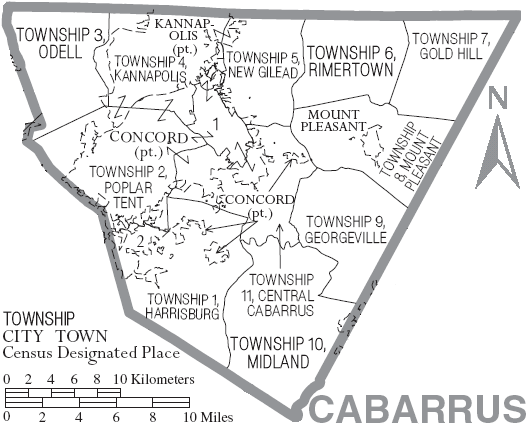 In this story, I want to focus on one son, who seemed to have disappeared, but not so entirely that he was unable to track down.

For whatever reason, Arkansas was a common destination for many area young men and even families, looking for a greener pasture. A well-known and often told story of "the only man to be hanged in Stanly County", was that of Alex Whitley, a local scoundrel and petty criminal, who headed off to Arkansas with his half-sister (and reputed girlfriend) and several associates, to escape from accusations of crimes here, only to commit a proven murder there, of school teacher and Stanly Count resident,  Burt Tucker.

And, for whatever reason, George Wesley Homer Barringer, the fourth child of Wiley and Belle, was another of these Arkansas rangers.

Born in 1887, Wesley, as we will call him, first shows up as a teenager in his parents home in 1900, in the Misenheimer area, which is on the northernmost edge of Stanly County, but they lived on the Cabarrus side of the line.

Shortly afterward, and oddly, on Christmas Day in 1902 , he married Lucy Roxie Isenhour, daughter of  Daniel M F Isenhour and wife Roseann Powles Isenhour of the same area, "Reed Misenheimer's", Cabarrus County. Lucy was a little older than he was, and nearly exactly to the day, nine months later, their first child, Elsie Irene arrived, on September 24, 1903.

The 1910 census shows a typical young farm family of 5, renting a farm in Cabarrus County, North Carolina, having all three of their children survive, and having been married for 7 years.

But something was restless in Wesley's soul. Something was awry, because in the next decade, his world, and that of his family will have changed.

The 1920 census gives this information on Lucy and her children;


She appears to be living in the same house, in the same area. She owns her farm and all three children are listed as farm labour. Many of her neighbors are Isenhours, and possibly, and hopefully, for her benefit, were relatives that could help out. Her marital status is "Married", not widowed, not divorced. Lucy was, obviously, an abandoned woman. Whether she knew the whereabouts of her husband is unknown.

In the Cabarrus land records, a deed exists that can help to explain Lucy's mode of survival.

An Indenture between R. C. Isenhour and Lucy Barringer. For the sum of $1.00, 21.01 acres in Number 7 Township, Cabarrus County. "The conditions of the above declare that at her death the said lands divert to her three children.

However, this is the family of George Wesley Homer Barringer in 1920.

Upon first glance, it looks like, "Whoa, this is not the right person." He's a grademan for the railroad, but it has him as "Wesley" and not ""George" and it claims his birth place is Tennessee.

And oddly, on his application for Social Security, he also goes by only his middle two names, and lists his birthplace as "Chattanooga, Tennessee", HOWEVER, his parents are listed as Wiley Barringer and Belle Page.  But the 1900 census claims his birthplace as North Carolina with the rest of his siblings.


The fact is, there was no other combination of a Wiley Barringer and Bell Page living anywhere in America at this time that could have produced this son, only our Wiley and Bell, and certainly none in Tennessee at the time. Wesley H. Barringer HAD to be George Wiley H. Barringer of Gold Hill Township, Cabarrus County, North Carolina.

His Veteran's Administration Pension Payment Card corroborates the fact that his first name WAS, Actually "George". As does the Headstone Application for US Veterans, Listing Fayetteville, Arkansas as his residence. While listing the "H" in his name as Homer in some instances,  on his WWI draft registration card, in 1914, his middle name is listed as "Howard" instead. He apparently was ambivalent there for awhile about what his middle, or third name should be.

His WWII Draft Card, part of "The Old Man's Draft" for those aged 45 to 64, gives ambivalence a new oddity, on the same card. Under "name" he is listed as Wesley Homer Barringer, yet he signs it, Wesley Herman Barringer. 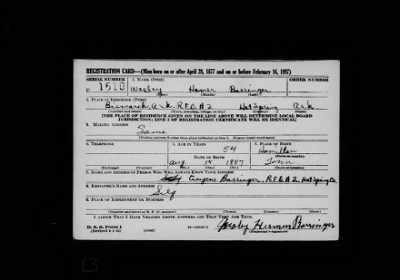 So......Where did the Hamilton, Tennessee come from and who was Nina Barringer?

Nina Irma Wagner was born on September 15, 1893 in Danbury, Red Willow County, Nebraska. She was the daughter of George Leroy Wagner and Alverda Emily Wagner. She grew up in Jaspar County, Missouri, and the family is there by the 1900 census. Her father was born in Ohio and her mother in Kentucky, yet the 1920 census also gives her birthplace as Tennesse and the same for both parents. Neither was true.

Nina and Wesley claim to have married, yet I've not been able to find a marriage license. It could be that Hamilton County, Tennesse is where they met, and thus became "reborn". Wesley may have figured being guilty of fornication was a lot less trouble than being guilty of bigamy, as the former was not prosecuted in the 1920's as it was in the 1880's, but the latter most certainly was.

There is not a marriage license listed for them in Hamilton County, Tennesse or in Arkansas.


Wesley Barringer and  Nina Wagoner's first census together was the 1920 one. It gives us a few clues as to how their relationship may have came about.

It tells us that Wesley was working for the Railroad, which gave citizens greater mobility. It claims their place of origin as Tennessee, where no one who could be mistaken for either of them existed.

Their 8 year old son Albert is said to be born in Arkansas, which would place them in Arkansas by 1912. This means that shortly after the 1910 census, George Wesley Barringer obtained a job with the railroad, probably in nearby Salisbury or Spencer, most likely ended up in Tennessee or Missouri, where Nina's family was in 1910. There began their relationship and they somehow chose the popular destination of Arkansas to begin their family.

Two more sons have joined the family. They claimed to be married and Wesley gave his age for first marriage as 20 while Nina gave hers as 15. Here, Wesley claims to only be 4 years older than Nina, while in 1920, he was 10 years older than her. Oldest son Albert had already married by 1930 and had established his own household by age 18. 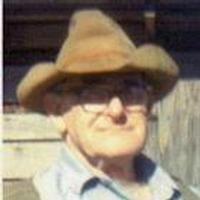 ( February 17, 1921 - December 18, 2006 )
Ralph “Slim” Barringer, age 85, of New DeRoche, Arkansas passed away December 18, 2006 at his home. He was born February 17, 1921 at New DeRoche, the son of Wesley and Nina (Wagner) Barringer. He was a WWII Army veteran serving in an Infantry 30th Division “Old Hickory”, and was also in the Airborne and Engineers Division. He served in the invasion at Normandy and received a Purple Heart and 2 Oak Leaf Clusters. He worked for General Motors, and for Reynolds Metals Company in the holding furnace, and was a farmer. He was also affiliated with Bismarck United Methodist Church.

He is preceded in death by his parents, a daughter, Tonya Barringer, and two brothers, Albert and Eugene Barringer.

Survivors are his wife of forty years, Sandra (Hudgens) Barringer; daughter, Rhonda Barringer and granddaughter, Whitney Barringer, all of New DeRoche; niece, Louise Loy of Natches, Mississippi; great-niece and nephew, Debbie Draper, of New DeRoche, and Steve Loy of Dallas, Texas; and a host of friends.

Visitation will be Tuesday, December 19th from 6:00 to8:00 p.m. at Regency Funeral Home in Malvern.

Lucy is still living on her property with her daughter Elsie and claiming to be married, still waiting on her missing husband, George Wesley Barringer.

By 1940, she has assumed he is dead, and listed herself as a widow. Her daughter Elsie still with her. Elsie did not marry until later.


But Wesley was not dead, he was very much alive.

He was buried next to his second wife Nina Wagoner Barringer.

Her death certificate lists her as a widow and her husband as George Wesley Barringer.


The Complete Lineage of George Wesley H. Barringer is as follows: