I finally threw enough dates, pages and sessions concerning the various suites involving the children of Benjamin Franklin Davis and Julia Ann Sibley Davis at the State Archives to find a record.

The treasure I received in the mail helps to clear up one small mystery, but intensely deepens another.

To understand what I am talking about, one would probably have to go back and read a couple of my older posts"

The Obituaries of Frank and Julia Davis

The Children of Benjamin Franklin Davis

The Relationship of Susan Davis and Martin L. Schenck


The Mystery of E M Davis

Ok. Now you are a little bit more prepared to understand who, what and where these lawsuits apply to, extend from and are targeted at. Somewhat. I've not even uncovered all there is to know, or even whom all they are talking about.

The package I recieved is a bit incomplete and a bit repetitive with overlapping xeroxed pages and some interesting added information.


Included is a letter and an attached map, or perhaps the letter was written on the map and that is how is was to be included. Below is the content of the letter. It concerns E. M. Davis, who is sometimes seen as "Elizer" Davis, but I believe to have been correctly named Elijah Marion Davis in honor of his maternal grandfather, Elijah Marion Sibley.

The letter included in the lawsuit documents read:

I have just received yours of  Jan 16 in answer to my letter to the Probate Judge of your county. I hardly see other way out of this matter in conditions and as you describe them Then to sell the land under the law in your state governing partition suits. Hence, I authorize to proceed to do so at once so far as the interest of my client Mr. E. M. Davis is concerned as I have Power of Attorney for Mr. Davis to act for him in this matter. I would suggest that you (illegible) myself  b mem as attorneys  in this partition, sent signed Smith and Johnson Attorneys for Plaintiffs. Please send me the probable cost (mostly illegible) cost, sent , please, copy of, as may appear in your official paper.
And oblige J F. Johnson, Attorney for E. M. Davis, Riviera, Texas.

And if there was any doubt as to where Riviera, Texas was, on the back of this letter is a map of the Texas coast from Gavelston to Brownsville, with a railroad line and adverts for locations of "Koch and Company", with all of the new little towns that had popped up. Riviera was one of the largest and listed as a location for "Koch and Co." and lay just a bit south of Corpus Christi. 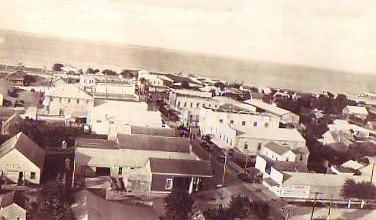 The Handbook of Texas by the Texas State Historical Association gives the following information.

RIVIERA, TEXAS. Riviera is on U.S. Highway 77 fifteen miles south of Kingsville in Kleberg County. It was founded by Theodore F. Koch, a land promoter from St. Paul, Minnesota. In 1907 Koch purchased from Henrietta King a large tract, which he had surveyed and divided to be sold to landseekers. He laid out a townsite adjacent to the St. Louis, Brownsville and Mexico Railway (the line had been completed in 1904) and named it Riviera because the area reminded him of the southern coast of France. After a railroad depot was built, Koch began running a train from Chicago to Riviera once or twice a month to bring potential customers to see the land. To make a good impression on these visitors, Koch had a hotel constructed and a flowing artesian well located near the depot. His guests were taken down a wide boulevard through Riviera; in the middle of the boulevard grew tropical trees, plants, and flowers. Those interested in buying farms were carried in buggies and later, automobiles, to see Koch's land. Many bought land and established homes in the community. Several businesses were started, including a general mercantile establishment and seed store. In 1907 a post office was established; in 1908, a school; and in 1910, a jail. The first few years of Riviera witnessed considerable growth, and optimism about the future was high. But in 1915 a severe drought discouraged many residents, and they left. The next year a devastating hurricane hit. Many settlers remained, however, and others moved in.
Sterling Bass, History of Kleberg County (M.A. thesis, University of Texas, 1931). Kleberg County Historical Commission, Kleberg County, Texas (Austin: Hart Graphics, 1979). Tom Lea, The King Ranch (2 vols., Boston: Little, Brown, 1957). 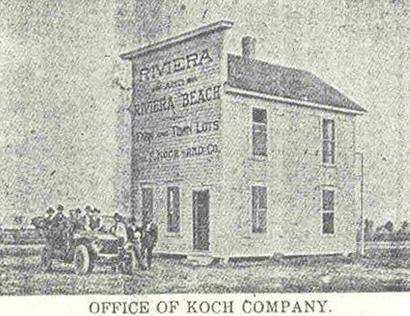 The page with the map is followed by a summons from Robeson County, North Carolina, for the surviving children of Thomas F. Davis, who passed away in 1906.

That is followed by one for the sheriff of Anson County for Mary McIntyre and her husband Jesse, who were found in Burnsville, Anson County, in the 1910 census.

The next one is to the sheriff of Burke County, North Carolina for Mrs. W. C. Cox, Mrs. Sallie Whitaker and Miss Sallie Davis, who were confined in the Broughton State Hospital.

There is a description of the lands adjoining the lands of Mrs. Julia A. Davis and lying in Tyson Township. First tract is described as lying on the East Side of the Winfield Road. The Second tract lying along Jack's Branch (see deed from W. F. Crump to H. A. (Hartwell Alexander) Davis.

All of those sharing the one eleventh as a group, except for Annie Campbell, are listed as minors without a guardian.

Susie Davis, Mrs. W. C. Cox, Mrs. Sallie Whitaker are all non compos mentis and are now confined in the state hospital for the insane at Morganton, North Carolina and are without any guardian.

That the petitioners desire to hold their interests in said lands, or the proceeds thereof in severalty.

In short, the reminder of this page said that a division could not be made without injury to the parties involved due to the small number of acres each would get and that a sale of the property would be more beneficial to all.

Then guardians were appointed for the sisters in Morganton and for the minor children of Thomas Davis, deceased. Appointed was "Next Friend" R. E. Austin.

Purchasers of the property were A. E. Hendley of a few tracts, J. W. Dry, a few tracts and  George Crump of the rest.

In March of 1913, E. M. Davis is now in Benton, Arkansas and he and his wife sell property to his brother-in-law H. L. McIntyre.


In 1922, with the death of Wincie Catherine Davis Cox, it began again. Another hearing in the Superior Court before the Clerk.

Wincy Catherine Davis Cox, otherwise known as "Kitty", spent the last years of her life at Broughton Hospital in Morganton and is buried there. She died childless and had been long estranged from her husband, Mr. Cox. Her death spurred a property division among her surviving siblings.

(Note: Noticeably missing is Sallie Whitaker and E. M. Davis. Mysteriously appearing is Mabel Davis. Could Mable be the missing "M" in the names of either E. M. Davis or Sarah "Sallie" Davis Whitaker? Susan had married and was now a Schenk, misspelled "Shank".)

Lillie McIntyre, one of the petitioners in the above entitled action, makes oath that the defendants above named can not, after due diligence, be found within the state of North Carolina, that said petitioners has a meritorious cause of action against the defendants for a partition of certain land, that said defendants formerly lived in Stanly County, North Carolina and has (sic) departed  from the State, and living some in Texas, Arkansas and other places unknown to this affiant.

The next section orders the action be advertised in the News Herald, a Stanly County newspaper.

The most interesting thing in the next section was that all parties were entitled to one tenth of the property, with the heirs of T. F. Davis entitled to one tenth as a whole, meaning the mysterious Mable Davis was indeed a child of Benjamin Franklin Davis and wife Julia A. Sibley Davis. This could only mean that either Sallie divorced Mr. Whitaker (and perhaps her older sister and married him) and that she was going by her middle name of Mabel, or that E. M. Davis was oddly named "Mabel" for his middle name. One of them was deceased, and the other still alive.

The land was sold in two parts, one purchased by  H. L. McIntyre and the other by William H. Davis, their cousin and my great-grandfather.

I know that Lorena A. Davis Whitaker would marry an Oscar Antonson in Boone County, Arkansas in 1928, with both of their residences being given as Hasty, Newton County, Arkansas and then she would pass away and be buried in Aiken County, South Carollina. The informant on her death certificate being one Arthur Antonson of White Pond, Aiken County, South Carolina, although no Oscar or Arthur Antonson can be found in census records of South Carolina at no time. Her date of birth, place of birth and names of parents being correct.

The search goes on

Posted by Jobs Children at 7:15 PM