The Obituaries of Frank and Julia Davis

Benjamin Franklin Davis was the eldest son of my 3rd Great Grandfather, Henry Davis, a grandson of Job and a brother to 2nd Great Grandfather Hawk Davis. His mother was Sarah Kendall Davis, Henry's first wife, by whom his first two sons were born. She was a daughter of Reuben Kendall, a successful and influential farmer of the forks/later known as "Wharf" area on the Stanly/Anson border. Frank Davis, as Benjamin Franklin Davis was known, would later record in his family Bible that his mother Sarah was buried at Hopewell Church, which is in the northern part of Anson County. 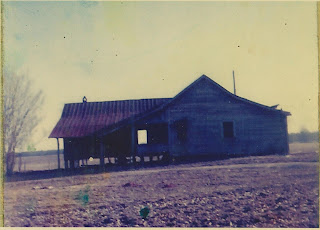 Franks location in 1850 is unknown, although his younger brother John E. Davis was working as an Overseer on the farm of their grandfather Reuben Kendall.

Frank, like most young men of his day, fought in the Civil War. Along with his younger brothers, John E. Hampton H. Davis, Horton H. Davis   and first cousin, William E. Davis, he signed up for the war in an Anson County unit, Company E of the 4th NC Calvary.


He would survive the war.

About 1856, Frank Davis had married Julia Ann Sibley, the daughter of another planter along the ilk of his own family, successful farmer and owner of large river tracts and businessman, Elijah Sibley.

Elijah Sibley would state in his will that he desired for "my children to have a good practical English Education and those of my sons who exhibit inclinations to engage in any of the merchantile trades....they be encouraged to do so."  Elijah owned land in Stanly, Anson and Union Counties. Possibly Richmond County as well. These were well-educated and provential people for their days. The Davis's and their associates were men of influence and wealth.


By the time Frank left for war, he and Julia had 4 children, Henry Edward "Holm", Mathew A., J. Franklin, who would pass away as a child, and Lorena A. Davis. The 1860 census counted only the oldest two sons, Hollum and Mathew.


The 1870 census showed a growing family

Holm, Henry Edward, and Mathew A. Davis have been joined by Lorena A., Thomas F., "Eliza" or Elijah M. (a son), and Hartwell Alexander Davis.

The 1880 census would show the slowdown of the arrival of sons, only one, John S. born after 1870 and the run of daughters would begin.  Not shown was youngest daughters Nannie A. and  Lilly Mae, who were born after 1880.


The family had moved to Richmond County by 1880, but at some point would move back to their family land on the Rocky River, where their final resting place would be.

Lorena (shown as Louvena) would later marry a Whitaker and lastly, an Oscar Antonson. An early division of property lists an "Ann Campbell" with the same status as the other siblings, and only Lorena is missing in the list, so she was probably married to a Campbell first. By the time her mother Julia deeded her a share of the property in 1912, she was listed as Lorena A. Whitaker, widow.

Eliza/Elijah M. Davis was recorded as having moved to Boone County, Arkansas and his wife listed only with the initials J. A. or A. J. Davis. 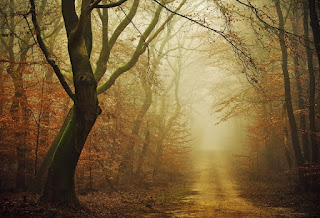 Three Davis sisters would marry 3 McIntyre brothers. Mary Ann was the oldest of these, as Nannie and Lillie would be the other two.

Wincy Catherine aka "Kitty" would marry an "E. W." Cox. This mystery was the subject of an earlier post.

Sarah A.,  aka "Sallie", would marry a Whitaker as well, his first name not certain, but most likely a William, as a William and Sallie Whitaker show up in the 1900 census of Burnsville, Anson County, and this William is the right age to be the son of Benjamin Frankllin Whitaker.

Susan E. , aka "Susie" Davis would marry Martin Luther Schenck of Rowan County, but not stay married very long, as  her spouse is seen living with his parents, abeit with a status of married, the first census after the wedding.

Benjamin Franklin Davis would pass away on December 21, 1898, just before Christmas, at the age of  69. Below is his short obituary.


The mystery afterwards is what happened to Julia?

She was found in the 1900 census, living in Tyson, with son Hartwell Alexander Davis, who never married, and Susie,E. Davis, who was not yet married.


As her name was listed in the wrong order by the census taker, the family name came out "July", a nickname for Julia, and her first name as Davis, but this was the correct family. The mystery in this census is the appearance of an 8 year old granddaughter, "Victory", a nickname for Victoria. Whose Daughter was she and what happened to her afterwards is unknown. July was shown as having been the mother of 14 children with 13 living.


In 1910, Julia Ann Sibley Davis is still living at age 71. She was in the same place in Tyson as in 1900, with the same neighbors. This census lists the name of the road, Winfield Road. Winfield Road was an old road that I have researched the origins of, that ran from Albemarle across the river into Anson County. It was named for the Winfield plantation of first Peter Winfield and later, his only son Edward, that was located on both sides of the river, and thus, in both Montgomery (later Stanly) and Anson Counties. A short portion of the Winfield road remains just east of Aquadale in Stanly County, between there and Norwood. It picks up in Anson County, where a longer section remains. I also know that it ran past Rehobeth Church, which still stands off of Plank Road currently and through the lands of Benjamin Murray, from whom the property for the church and cemetery was purchased by other ancestors and relatives of mine, including Caleb Aldridge. The old cemetery, which contains the body of B. F. Davis and descendants of his, is located on a loop road off of Plank Road, which pretty much looks like Plank Road runs the coarse, with a few exceptions, of the old Winfield road.


In 1909, Julia would divide her remaining property among her surviving children. In her last census, the 1910, it states that she was the mother of 14 children with only 8 surviving. Franks bible lists 14 children. Only one, a son called "J. Franklin", never appears in a census, so it seems clear between this record, and the 1900 and 1910 censuses, that B. F. and Julia had 14 children:

The 8 living in 1910 is probably incorrect. We know Tom died in 1906 and Hart died in 1902. The land records indicate that in 1912, Julia transferred property to the following in separate deeds: H. E. (Holm) Davis, J. S. Davis (John), S. E. Davis (Susan), M. A. Davis (Mathew), L. M. McIntyre (Lilly), N. A. McIntyre (Nannie), L. A. Whitaker (Lorena), E. M. Davis (Elijah/Arkansas), M. E. McIntyre (Maryann Eliza), W. C. Cox (Kitty). That is ten. Sallie Davis Whitaker is missing, however, she is mentioned in another legal document on the division of property of Hartwell Alexander Davis in 1911, lists her as alive. The status of some of the Davis daughters needs further investigation and a further post. 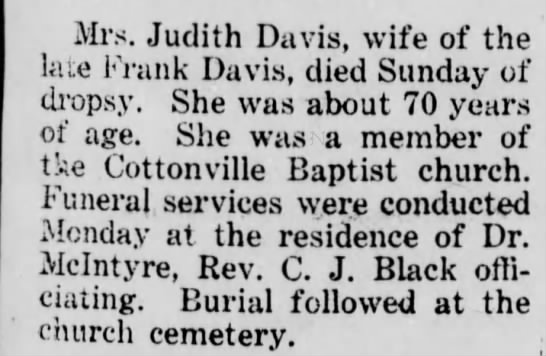