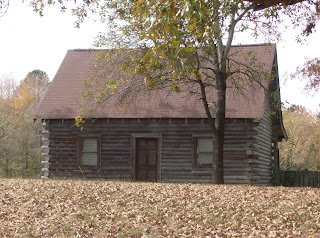 To evaluate the family of John Randle (or Randall) Howell, son of Jordan Howell (Sr.) and Martha Randle Howell, of early Stanly County, North Carolina, I need to begin at the end. His will.

Sound of mind & memory but considering the uncertainty of my earthly existance.

To my Beloved wife, Elizabeth M. : 100 acres of land to include my Mansion House, all outhouses and improvements to be set out where she thinks proper; 1 negro man, Buck, 1 negro woman Eliza, 1 young sorrel horse 5/6 years old, my buggy & harness, all household & kitchen furniture, farming tools for 2 hands, $40.00 cash to buy a one-horse wagon, 2 cows and calf her choice, half of all my hogs, corn, wheat for support of family and herself one year, 250 lbs sugar, 200 lbs coffee, 1 barrel molasses, 2 sacks salt t be furnished by executors to said Elizabeth M. Howell during her widowhood in lieu of her dower.

To my daughter Sarah A. J. McSwain wife of Martin M. McSwain: use of interest on $300.00; use of the tract of land on which Martin McSwain now lives during her lifetime, then to her bodily heirs.

To my daughter Martha C. Earnhardt wife of James A. Earnhardt: a negro girl Harriet about 12 years old to be hers for life; then to belong to her bodily heirs.

To my grandson William J. Earnhardt: 1 pided colt about 5/6 months old which James A. Earnhardt his father is to raise & use, in fee simple.

To my son, Lemuel M. my daughters Mary J. wife of Benjamin F. Thompson, my son Griffin G., my daughter Margaret A., wife of James W. Britt, my son James W., my daughters Tirzah W. and Samantha E. : an equal portion in remainder of my land, & Amy, a negro woman about 50 years old, Freeman, about 34 years old and Freeman about 18 years old, George about 40 and also, my two thirds of a negro man Mack, now in my possession to them and their heirs in fee simple.

The above negros, except Buck and Eliza, willed to my wife Elizabeth M., and Harriett, willed to my daughter Martha C. Earnhardt, to be hired out until my youngest child becomes 21 years old.

Edy, a negro woman about 48 & all residue of my estate after devises above mentioned to be sold, debts to me collected and surplus over debt payment & legacies to be loaned out until youngest child comes of age, then divided equally among them, viz: Lemuel M. Howell, Mary J Thompson, wife of B. F. Thompson, Griffin G. Howell, Margaret A. wife of James W. Britt, James W. Howell, Tirzah W. Howell, Samantha E. Howell.

Codicil: To my daughter, Sarah A J McSwain, wife of Martin M. McSwain, all cattle she has in her possession belonging to me; my ball horse about 17 years old, if she outlives Martin M. McSwain, she is to have full power to sell any property mentioned in will or codicil in fee simple. Property deeded wife to be divided equally among my heirs at her death or marriage, Martin M. McSwain and wife, Sarah A. J. McSwain excepted.

Whereas, I am lawful guardian of my mother, Martha Howell, she is to be allowed to select a home & be provided the necessaries  of life for life. August 26, 1860 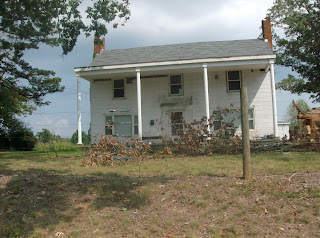 John R. Howell left a very thorough and informative will. Not only did he name all of his children, including middle initials, he named the spouses of his married daughters, and gave the exact birth dates of his youngest three children.

I've seen other persons try to hook him up with additional children, and as well he and Betsy may have had additional children that passed away young, as most families did, medical care and lack of cures for common childhood illnesses being what it was in those days. However, he did not have any other children who lived to adulthood, or past the date of his will. 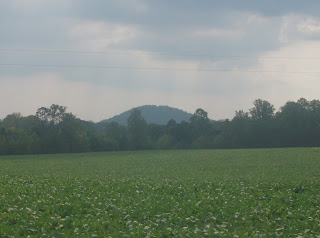 1840. John R. Howell first appears as a Head of Household. 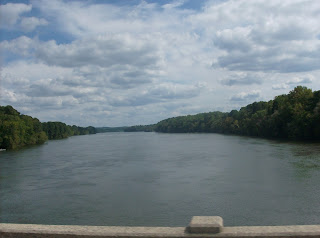 His homestead was in West Pee Dee, or the Stanly County side of the river. His neighbors were Isham Randle, John Duke, Howell Upchurch, George Blaylock, names and neighbors that were reflected in the earlier censuses his father, Jordan Howell appeared in.

John's year of birth is given as 1805 and he is listed as a farmer with neighbors as William Allen, Merritt Blalock, Charles McSwain, and William H. Randle. His mother Martha, of whom he was guardian, is living with them. 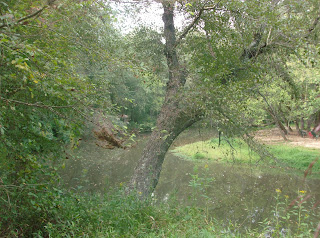 1860 John, at 56, has established himself and even had young Dr. Richard Anderson living with him.

It was to be his last census.

2) November 2, 1843  "Mrs. Martha Howell, declared by jury summoned by sherriff to declare state of her mind, is non compos mentis and incapable of attending to her affairs. John R. Howell appointed guardian of Martha Howell. gave bond of $6000 with John H. Treadwell, George Shankle and William Allen as securites.

9) John R. Howell, guardian of Martha Howell, renewed his bond of $2000 with William H. Randle and Andrew Huneycutt as securities. 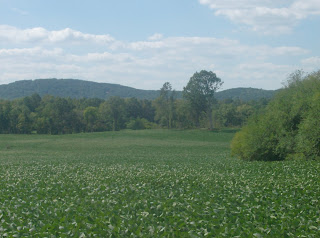 Prior to his death, only 3 documents list the name of John R Howell in the Stanly County records. Others involve his widow, Elizabeth and his children, after his death, but only the following three named John R. Howell. His acquisitions likely were in the Montgomery County records and inheritance after his father, Jordan died, would have been destroyed in one or more of the Montgomery Courthouse fires.

Nov 22, 1848 James G. Howell receipt. Recieved of John R. Howell, Guardian of Martha Howell, $650 dollars in full, my distributive share of my father's estate, with the exception of my interest in one negro man named Mack, left with said John R. Howell to support and maintain my mother aforesaid.

November Session 1848, James G. to John R. Howell "This indenture made the 5th day of January, 1847 between John R. Howell of the County of Stanly and the State of North Carolina and James G. Howell of the State of Mississippi and the County of Carroll,.....my interest to an in the lands which descended to me from my father Jordan Howell lying in the county of Stanly.....signed James G. Howell. Witnesses: E F Lilly, William Allen. 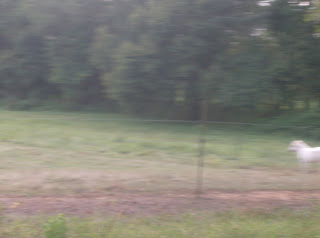 Road Orders
Stanly County Road Orders issued during the May Session of Court in 1841.

This one record leads to a great mystery. The list are neighbors and relatives of John R. Howell. Richmond Blalock was married to his sister Catherine, George and Jordan Blalock were his nephews, Martha Howell was his mother and the Watkins were related to his brother-in-law, Thomas Watkins. Richard Howell was his brother....but who was Thomas C. Howell? This is the first time I've ever seen this name. Was he an unbeknownst brother or a teenaged son who died before 1850? Many times workers and "chain carriers" mentioned in land records were minors under 21, mere teenagers sometimes. Or was this a transcription error? Maybe it said "James G. Howell?". At any rate, I've never came across this Thomas C. Howell before. The older Thomas Howell, if he were still alive at this juncture, as he was 70 to 80 years old in the 1840 census, would have been too elderly to work on a road. 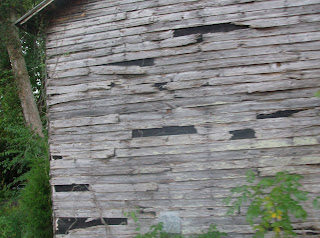 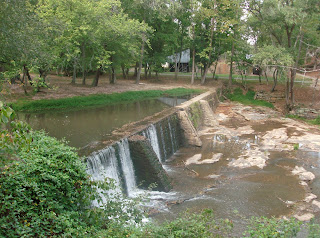 Guardian records recorded payments made to individuals who were taking care of persons for the county who were unable to take care of themselves due to health, condition, disability or age.

John R. Howell was paid as the guardian of his mother Martha, who had been declared an "idiot" by the court. This condition arrived as she aged, as she was clearly not mentally incapacitated in earlier times. She may have suffered an injury or illness that rendered her so, or may have had a form of dementia. Returns were dated Feb. 1844 and Aug. 1845.

I looked into the possibility that James Harward may have been a relative, but found no connections. He seems to have been a neighbor and a Good Samaritan, as he performed other good deeds for persons in the community. He and his wife were childless and this may have afforded him the availability to care for the unwell.

Also, David Howell is recorded as the guardian for a William Woods, who passed away in 1850. 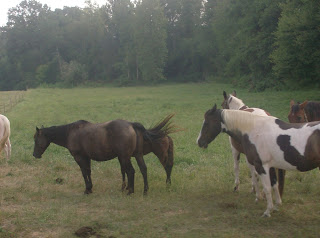 All available records add up to John Randle Howell and Elizabeth M. Nash Howell having 9 known children. They were:

8) Turza W. "Turzy" Howell
Born: July 28, 1847 in Stanly County, NC
Died: Unknown. Followed mother, sister Margaret A. Howell Britt, younger sister Samantha and
nephew John T. Britt to Mississippi via Tennessee to live with mother's Nash and Winfield family.     Appears in 1880 census, but is not buried with mother and siblings. May have married.


John Randle Howell is most likely buried in the old  abandoned Poplar Springs Cemetery near Cedar Creek, just outside of Norwood, North Carolina. He farmed the same land he grew up on and raised his family there. While many of his family moved west, he was one that stayed. His family ties are woven in to many of the existing families around Norwood today. Several of his daughters and grandchildren have marked graves at Poplar Springs.

Posted by Jobs Children at 6:34 AM