Falling From the Sky: Who was James Frank Melton?

J. Frank Melton was not a Melton I had really thought about in my earlier research. Certain he was a member of Generation Next, I did not research him, and it just seemed logical that he would be a son of one of the Melton's alive in the mid-19th century. I had came across a few records in which his name appeared, his marriage license and such.

But recently, as I was looking into the younger generations, those who lived past the turn of the century, James Frank Melton became an anomaly.

What I do know, is that he is buried at Randall's Methodist Church, near Norwood, North Carolina. His tombstone records his birth as October 29, 1846 and his death as August 28, 1926.

He has a marriage license and a death certificate, so....what makes him a mystery?

Patriarch David Melton b Oct 12, 1817 d Aug 10, 1907. Dave lived a long time. He was one of the sons of John Melton Sr. The death certificate of his son John Alexander Melton names his father as "Davidson", so David might have been the shortened form. The name "Davidson" was popular in the Melton family. James R Melton named a son "Davidson Hearne Melton", probably named for his business partner, Davidson Hearne. and David Melton named a son, "Davidson Alexander Melton".

So, in odd summary, every other Melton in the Randall's Church cemetery is related to David Melton and Mary Boysworth Melton, either a child, grandchild, great-grandchild or a spouse of one of those. All, except for James Frank Melton and his wife Dockey Jane Simpson Melton.

Dockey is simple. She was born in Stanly County, her parents are clear. Frank, however remains a mystery.

He first appears in his and Dockey's marriage license:

A John W. Leonard applied for the license. The couple was married on October 12, 1899 in Norwood by a Mr. Snuggs, JP. Witnesses were Dora E. Snuggs, Bertha Snuggs and Mary A. Snuggs, all of Norwood.

Dockey Jane Simpson was the daughter of John B Simpson and Ursula Lowder Simpson. In her day, she would have been considered and 'old maid' as she had not yet married by 35.

Not knowing his exact origins, I can not locate Frank in any prior Census records. Being born in 1846, he should appear somewhere in 1850, 1860, 1870 and 1880. A closer look at the existing records gives us a few hints.
1) They all agree that he was born in North Carolina.
2) The 1900 census says that he was born in August of 1847, and that he was working as a sawmill hand and that both parents were born in NC.
3) The 1910 census agrees that all parties were born in NC, and reveals that this was Frank's second marriage and Dockey's first. Frank was working as a watchman at a Furniture Shop.
4) The 1920 census has the whole family working in a Cotton Mill. Frank, now 74 on the record, is sweeping, while wife Dockey is a 'Spooler' and 15 year old son Oliver was a Doffer.

Frank did not make it to the next census. He passed away on August 28, 1926. He has a death certificate. It lists parents. You would think it would be cut and dried.

The informant was Willis B Kirk. The Melton's of Stanly were closely related to the Kirks. There were multiple marriage between the two families. What did Willis know? Or did he simply guess?

The problem is, Mr. Kirk gave the names of Oliver and Fannie Melton for Frank's parents. The 1850 was 4 years after Frank's birth. Would it not be feasible that he would be listed in their home that year? But there is no Oliver and Fanny Melton. Anywhere. Period.

Doing a search of all census and other records pulls up plenty of Olivers, but all of them younger than J. Frank. Normally, he should have shown up as a little boy, with his parents in the 1850 census, but there is no Oliver and Fanny. What if he were orphaned very young, his parents should have at least been alive before he was born. But there is no Oliver Melton in the 1840 census.

There was an Obediah Melton in Jackson County, Alabama in 1840 and an Owen Melton in Onslow County, North Carolina. But no Oliver.

So who was W. B. Kirk and how would he have knowledge of J. Frank Melton, that was not even revealed on his marriage license?

Wilson Boon Kirk was the son of Thomas Martin Kirk, Jr.  and Mary Frances Andrews Kirk. Thomas Martin Kirk Jr. was the brother of Mary Ann Kirk Melton, wife of James Roberson Melton. James R. Melton and wife named their only daughter Ellen Douglas Melton. James Frank Melton and wife Dockey named their only son Oliver Douglas Melton. It is possible that there was some relation and that the Scottish Douglas family had intermarried at some point with the Melton's and that these were related.

W. B. Kirk's family was also the last family that Dockey Jane Simpson Melton resided with before her death.
In 1930, she was boarding with George Thomas Dennis and family.

Her last days were spent with W. B. Kirk and family. In the meantime, where was their only son, Oliver Douglas Melton, and what became of him? Could Frank have made a comment at some point that he named his son for his father and W. B. Kirk assumed his father's name was Oliver? Perhaps his middle name was Douglas instead.

In 1930, he was in the army, at Fort Bliss in El Paso, Texas and was a Sergeant.
In 1940, he was still at Fort Bliss, but it said he was married, however, he is listed as alone and marries the next year in Missouri.

He married Grethal Elizabeth McQuire in 1941, perhaps before leaving for WWII.

He and Grethal would have one son, named for his father, who would grow up and reside in California.
This son remains in California with his wife and two daughters and is now a grandfather.

Oliver would die in 1966 in California during the emergence of the hippie movement.

There are no hints in Oliver D Melton/Milton's life that indicates where his father came from.

Not being able to pin down James Frank Milton prior to his marriage in Stanly County in 1899, I went to look in other sources. There were several Frank Melton's or Milton's that could have been him.
There were also James Melton's who might have been him. But none a son of an Oliver and Fanny.

I went to the library to look in a specific book. Around the turn of the century, when Frank Melton lived here, there existed a roll called the "Permanent Voters". Powers that be in south were trying to find a way during the Jim Crow era to prevent non-white persons from voting. 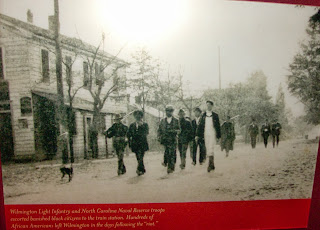 They enacted a law that stated all voters must be able to read and write. As the education system suffered greatly after the Civil War and many orphaned children and half-orphans were put to work and not afforded the opportunity to learn to read and write, they created this "Permanent Voter" list to allow any man who had voted, or who was descended from a voter on the rolls prior to 1867, to be able to vote. This knocked out anyone descended from a former slave. It was a tumultuous and irrational time, but the books remain a tool to determining ancestry.

The following Melton's were in this book, followed by the name of the ancestor they gave as a permanent voter. Most men gave the name of their father, others of their grandfather, depending on their age. I noticed this by looking at other people I was familiar with and who they had listed as their Permanent Voter ancestor. The Murrays, for example, one of the first families I've attempted to entangle.

John R Murray and B. E. Murray gave Edmund Murray as their ancestor. In this case, Edmund was the father of John and Ben Murray. The age of the voter and the year the list was made also helps separate men of the same name who might have lived in the county at the same time.

Now several of these men were mentioned above in the section on the Melton's buried at Randall's church. All were sons or grandsons of David Melton or his brother Henry Harrison Melton, who was killed in the Civil War.

The "J. Frank Melton, age 61 in 1906, is clearly the right Frank, and he lists William Melton as his ancestor. Born in 1846 would put him at 60. Close. David and Henry had a brother William Jones Melton the first, who would later migrate to Missouri. The family was still in Stanly County in 1850. The only child living with them then was their oldest daughter Mary F. The young man, John Lilly, living with them was the only son of sister Francis or Fanny Melton Lilly and her husband John Hogan Lilly.

But what about the Frank Melton who listed his ancestor as "Jim" Melton?

Seems the only Frank Melton in Stanly County around the turn of the century was the same, J. Frank Melton.  There was a Frank Melton living in Lilesville, who was born in South Carolina, but he was Benjamin Franklin Melton, son of a John and Amanda Melton. Not a Jim or a William. And "Jim" Melton of Stanly County was James Roberson Melton, who had only 3 children, Davidson Hearne Melton, Ellen Douglas Melton and Henry T. Melton.

So far, searches for a James or a William Melton who had a son named James Frank has been to no avail. Was he the son of the mysterious William B Melton, in the early ledgers, who disappears before 1850 and is not a head of household in the pre-1850 census records? Or has he a tie to John Sr.'s brother James, who is in early land records and married Elizabeth Pettypool?

Is James Frank Melton buried at Randall's a key to unlock the early Melton's or did he just fall from the sky? Is he a new path or a dead-end road?

His tombstone gives one more clue. It says that he was a Confederate Veteran. Will it lead anywhere?

So far, he remains a mystery.

Posted by Jobs Children at 7:17 AM