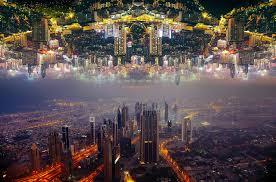 The concept of a parallel universe has inspired many a Sci-Fi movie or TV show. I am currently binge-watching "Fringe", which incorporates this idea in its premise. This does not suggest I believe they exist, but neither does it discredit the idea that it might. While looking at the Ford family of Richmond County, North Carolina, I began to wonder if this family had been caught up in a parallel universe, they were so - unclear.

It seems people kept mixing up Solomon and Thomas Ford, and still do, apparently. Both were sons of  Jacob Ford and wife, Hannah Sheppard Ford. I believe I am still missing one Ford child in the fold, one living still in 1910, according to Hannah, who lived to be 100, but they had more daughters than sons, that I know. I have identified three sons, Solomon, Thomas and George, the latter having died during service in the Civil War.

No little amount of confusion was brought about by the 1850 census, wherein Jacob and Hannah were listed with 8 children who were not theirs, or either, who all promptly died, while children who were theres', and should have been listed as living in their parents home, were not, and were not anywhere to be found for that matter. I tend to think the enumerator had made just one whole big mistake and gave someone else's children to them, while he was under a tree unwrapping his 2 pm snack, having promptly forgotten the names of the correct children.

The first authentic census, beyond the 1840 census, which shows Jacob's household as a young couple with one small boy in the home, which would mesh well with being Solomon, as he was born in 1838 or 1839, was the 1860. Here, Thomas, the youngest brother, is a 13 year old still living at home, while older brothers, Solomon and George, are out on their own. George, who died during service in the Civil War, is just next door, working as an Overseer for a Mrs. Covington, while Simon has already married and is living in his own home.

That leads to another source of confusion between the brothers, both had wives named Martha. Solomon had married Martha Northam in October of 1859, a lady older than himself. Thomas would later marry Martha Shepherd, who was younger than he, in 1867, meaning there was a noticable age gap between the two Martha's and that would come into play later.

By 1870, both brothers were married and running their own households. In 1860, Solomon was shown living near Bear Branch Post Office in the Fairgrounds District. He was a 21 year old man living with 33 year old Martha, so there we saw the big age difference between himself and his bride.
Ten years later, the couple had 2 little boys, John and George. Solomon is 32 and his wife, "Marth" incorrectly transcribed as "Nath", was 43. Littleton Ingram was a farm hand hired living with them.
Whereas his brother Thomas, a relative newlywed, was working as a farm hand himself, and living in the city of Rockingham, with his wife Martha and  a baby daughter named Rebecca, after his sister possibly, who was 1 year old, although that part was missed in transcription. They lived next to Maston Sheppard.
A ten year jump to 1880 shows how fluid age was in these things. In 1870, it showed Tom as 21, while his wife Martha was 35. In 1880, Tom has aged 17 years and is shown as 38, while is wife Martha has gotten 15 years younger, from 35 to 20. Other, more reliable records give Thomas's year of birth around 1848 and his wife Martha's as 1849, meaning they were only one year apart in age. He was only 21 or 22 in 1870, and she was  20 or 21 and here in 1880, he was 31 or 32 and she was 30, not 20.
Rebecca, who should have been 11, not 9, as she was a year old in 1870, was joined by sisters Mary and Mattie, short for Martha, a brother, Thomas Jr. and a baby sister Carrie. Carrie, being a more identifiable name is very important here. They are still in Rockingham.

Solomon and his wife Martha, are farming in Black Jack District, which may have been the area previously called Fairgrounds, I'm not certain.
They are living with their 10 year old son, William, whom Martha was probably pregnant with in 1870. Martha, being considerably older than Solomon, would only have the 3 boys. The two older ones, John Monroe Ford and George Washington Ford, were alive and traceable. Both had already joined the workforce. John was staying with a relative, south of the border, in Marlboro County, South Carolina and George was working as a farm hand, helping out a neighbor, a young farmer named Robert Manship, with his wife, Cornelia and small children, Cornelia 4 and Collier 2. Not unlike his namesake Uncle George 20 years earlier.
It was the 1900 census that would throw a cog into the machine and confuse nearly all 20th and 21st century descendants.
Before 1900, Solomon's first wife, Martha Northam Ford, who might have been a widow when he married her, as son John Monroe Ford's records list his mother as Martha Covington, a common name in the area in which they lived. It's not hard to imagine Solomon marrying an older, but still young, widow who owned property, as in their first census, he is 21 and she is 33. So she could have been Martha Covington Northam when she married.
In 1900, Solomon is 62, his second wife, Eliza Sheppard Ford, is 49 and his youngest son, Robert Lee Ford is the only one still at home. It gives his years married as One. We're going to have an issue with that shortly.  Many folks have ignored this record. Below is the one they all pay attention to.
There's alot wrong with this record. First of all, these aren't the children of Solomon, with one exception. Secondly, the transcriber has Martha Sheppard Ford's name as "Montia", making some people create a new, nonexistant wife for him. A quick peruse of the actual document reveals that it is indeed "Martha". Another clue  is that they were married in 1867, the year Thomas and Martha got married, and have been married for 33 years. The exception is that Thomas doesn't have a son named Robert. Now, it's possible, as he was born after the 1880 census, for two brothers to have a son of the same name. However, I can trace all of these chileren beyond this census, except Robert. There was a Robert, but he was Solomnons's son. He married Thomas's daughter, Carrie. I believe this was NOT his son, but his nephew.
Things become a little more clear in 1910, the last census for both brothers.
Solomon and his wife Eliza Sheppard Ford were living in Black Jack District. Oddly, they went from being married 1 year in 1900 to 40 in 1910. Eliza reports being the mother of 5 children with 3 living. Who were they? Oddly enough, in 1900, she had reported being the mother of 6 children with 3 Living. Was she counting Solomons's sons by Martha Northam Ford?
In 1910, Thomas is a widower, his wife, Martha Sheppard having passed away n 1903. She was buried at Zion Church, north of Rockinham. Children Loula, Peter and Hassie were still at home. In 1900, Martha had reported being the mother of 11 children, with 10 living. Those 11 children were very clear.
1)    Mary Ford b 1872 died before 1900. No record of marriage.
2) Martha "Mattie" Ford 1873-1942. Married Robert "Bob" Hasty. 3 daughters.
3) Rebecca "Becky" Ford (1875 - 1928) Married William C. Covington.
4) John Thomas Ford ((1877- ?)
5) Cariie Mae Ford (1879-1959) Married Robert Lee Ford. 1st cousin. 6 children. 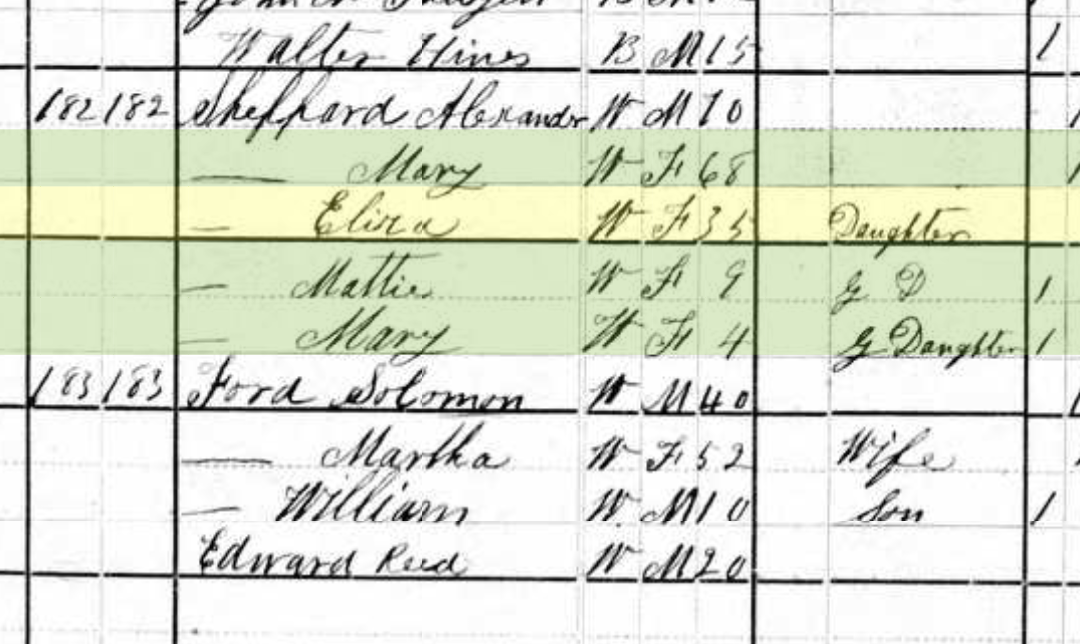 In 1880, as shown above, we see Alexander "Sandy" Sheppard, his wife, Mary and thier 35 year old daughter, Eliza, living right next to 40 year old Solomon Ford, his wife, Martha, 52 and their youngest son, William. Eliza has two daughters, Mattie, 9. born about 1871 and Mary, 4, born about 1876. These girls were not Sheppards, they were Luncefords (or Lunsfoud).
Sandy and Mary McCaskills Sheppards daughter, Elizabeth , aka Eliza, had married Aris Lunceford in September of 1868. She was his third wife. He had married Jane McDonald in 1850 and Eliza Jane Taylor in 1852.
The marriage produced 3 children, Willliam, Mattie and Mary. William, an infant in 1870,does not appear with Eliza in 1880, when she had to return to her parents house, so it appears both William and Aris died before 1880.
So there are the three children living in 1900 and 1910 that Eliza Sheppard Lunceford Ford claimed to be the mother of, Mattie, Mollie and Robert,  and one of the deceased ones, William.
Mary "Mollie" Lunceford married  John Thomas Liles, son of Malcolm and Pollie Liles, both parents deceased and her father deceased and mohter, living on January 14, 1895. The wedding took place at the home of Stev Paul (Stephen Tebe Paal) and  witnesses were  Z. O. Ellerbe, A. P. Covington and John Paul. in Black Jack District, Richmond County. At this juncture, I do not know who Mattie married or where she ended up.
This sums up the entanglement of the Ford brothers. There were two different  Marthas; Solomon was married twice and only had the 4 sons. Thomas had the larger family and it was his Martha that is buried at Zion.. Solomons Martha may be there too, but her marker no longer exists.
Posted by Jobs Children at 1:28 PM