Jerry McQueen had more than dna in common with his Scottish-born father, Alexander "Marcus" McQueen, a love of the land and an eye for the ladies.

Jerry McQueen was born November 12, 1848 in Montgomery County, North Carolina, in what was called "Holllingsworth District". He was the oldest son of Linda "Len" or "Lindy" McQueen. His mother, Lindy, was a slave, and his father, Alexander "Sandy" McQueen was the Scottish-born man who held her in slavery. The racially mixed Jerry McQueen, was born into slavery, as it did not end until he was a teenager.  I believe the below record probably refers to Lindy and Jerry.

Sandy McQueen had a legal wife, Sarah Batten McQueen, who was of his own complexion. Together they had born and raised 9 children. The youngest of those 9 legitimate children was Neil McQueen. Neil was 8 years younger than his youngest full sibling, Sarah. He was also born in 1848, the same year as Jerry. As an adult, Neil McQueen would record the various platitudes of his family in a Family Bible, as was typical of the day. He recorded his grandparents arrival in Wilmington as immigrants from Scotland. He recorded the births and marriages of his siblings. But what was quite unusual for the time, Neil also recorded the birthdates of his mixed-race half-siblings, with his own father listed as theirs. His father had 12 children with three enslaved women, Hannah, Lea and Lindy. Jerry was one of them.

In the 1870 census, the first in which formerly enslaved people are listed by name, Jerry is seen working as a laborer in Mineral Springs, Richmond County.

The Yates family he is working for lives right next door to the family of his half-brother, James Murdock McQueen, so there is the connection to Richmond County.

The very next year, in 1871, Jerry would marry his first wife, Clarice "Clara" McCaskill, daughter of  Alexander "Sandy" Morrison and Violet McCaskill. Together, they would have 8 children:

It appears Clara was prone to have twins.


In 1880, they are living in the Hollingsworth Township section of Montgomery County, where Jerry grew up. Clarice is also listed as mulatto, so she was, like Jerry, of mixed race. Fifteen year old Calvin Jones is listed as a nephew. Their 3 oldest children have been born. Jerry is a farmer, but the record holds other surprises. Both other children are noted as having attended school and can read and write, and right next door is a McCaskill family and the head of the household, Darions, is only a year older than Clarice. Could he be her brother?

Also nearby is the septigenarian Cager Brewer, who keeps coming up amongst or near the families I have been researching.


Shortly after this census, Jerry McQueen would establish a long-term relationship with Mary Jane Ward. Mary Jane was a granddaughter of Micajah "Cager" Brewer, a child of his daughter Elizabeth Brewer and her husband, Henry Ward. There was another factor in the relationship of Jane Ward and Jerry McQueen, besides the fact she was a single woman and he was a married man. Against all social norms of the era, Jerry McQueen being half Scottish and half African, was a man of color. Mary Jane Ward was of European decent, and white.


It would be really interesting to be able to look back in time and  see the dynamics of these relationships. Did the women know about each other? I'm sure the mistress, Jane, must have known about the wife, Clara. Did Clara know Jerry was spending time with Jane? Did he rotate from one to another?

The first child of Jerry McQueen and Jane Ward was  a daughter, Alice, born in 1883, the same year as his fourth child with his wife Clarice, Robert.

1887 was a very busy year for Jerry. He had twins Eliza Roxanna and Archibald with wife Clarice, while also fathering a second child, Lillie, with Jane.

Clarice would pass away sometime after the birth of Mollie and Stella in 1891, and before 1893.

Jane also had a child in 1891, Rebecca and a son, Ollie, the next year in 1892. This did not mean that Jerry was now all hers or true to her. The last child of Jerry McQueen and Jane Ward was James Eldridge, born in 1894. And that did not mean their relationship was over.


Jerry married his second wife, Mariah Jones Morrison on May 7, 1894. Mariah was a widow, having been married previously to Robert Benjamin Morrison. She had been born Mariah Jones, the daughter of Charles and Harriett Jones, and with R. B. Morrison had 3 sons who would travel the country.


The 1900 census of Hollingsworth Township, Montgomery County, North Carolina is very faint and barely legible. From what I have been able to decipher looking at the actual document, I see Jerry McQueen 50, with his wife Moriah 35, having been married 7 years. It appears his mother "Len" might have been living with them. Also listed are Theo W, 17 and John R. 16. Although they are listed under McQueen, these were Mariah's sons and they were actually Morrisons. Daniel Arthur was


Also in the household was Rebecca McQueen 15. Rebecca was, oddly, the daughter of Jerry McQueen by Mary Jean Ward. Then there was Archibald M 13 and Stella, 10 and Mary 4. The illegible names must have been Isabelle and Minnie, and perhaps Mariah's son, Daniel. 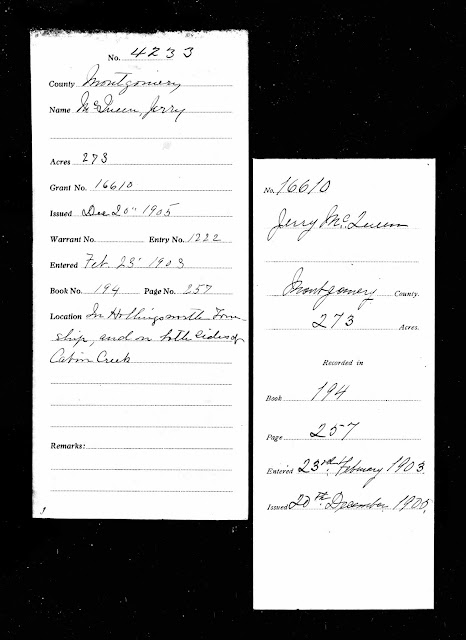 Jerry recieved a grant, in December of 1905, for 273 acres in Hollingsworth Township, on both sides of Cabin Creek.


Cabin Creek is located near the Montgomery/ Moore County lines and near the present town of Biscoe. 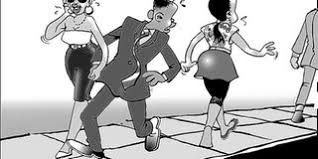 But despite having remarried and having children with his wife, Jerry had apparently not left Jane alone. She had inherited land from her father, and by some means, it ended up in Jerry's name. 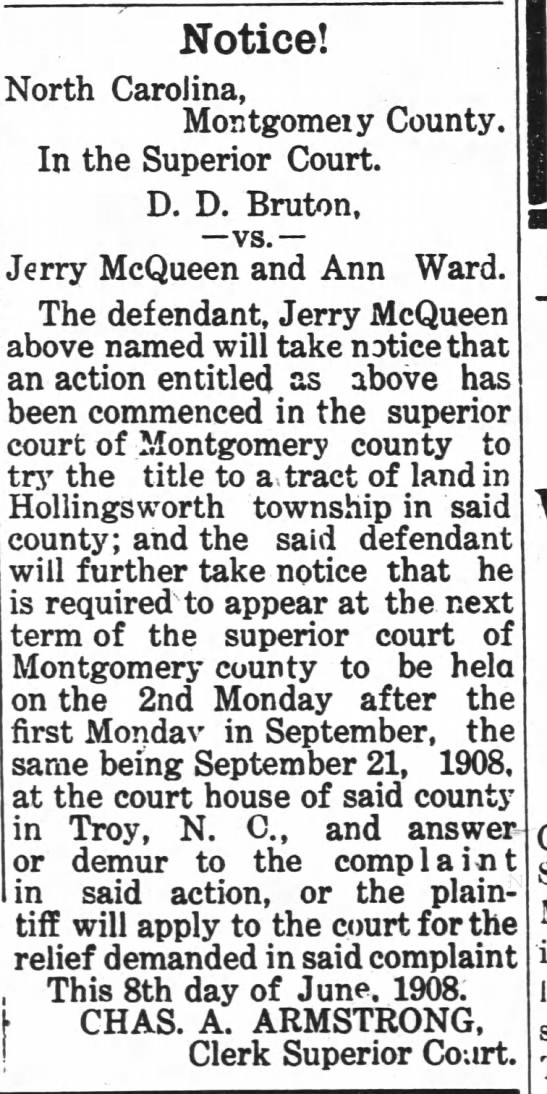 The above court case was in 1908. Jerry was taxed for 273 acres on Cabin Creek the same year.

CLIPPED FROM
The MontgomerianTroy, North Carolina02 Apr 1908, Thu  •  Page 2
Mariah must have had the last word, as two years later, in 1910, the family had relocated to Florida.


Several of Jerry's children went with them, because they married in Florida and several stayed. Jerry worked as a Cooper in a Naval Store and Florence Evens, (seen here as 'Florena', was Mariah's niece by marriage, her mother being Emma Morrison. 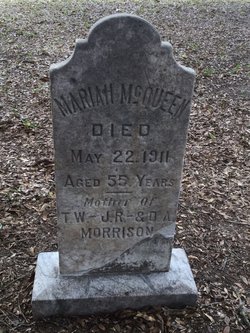 Mariah didn't live in Florida for very long. She died May 22, 1911 and is buried in Pensacola, Escambia County, Florida. She was 55 years old. The sons mentioned on her tombstone are her 3 sons by Robert B. Morrison.Jerry returned to North Carolina, fairly quickly it appears. Some of his children remained in Florida and several of them traveled far and wide across the country.


In 1912, Jerry was again paying taxes for property on Cabin Creek.


Jerry died on August 6, 1915, of Chronic Nephritis at the age of 73. It was also noted that he had Bright's Disease. The informant on his death certificates name is illegible and not recognizable, "Haddin Kavedbush" is the closest I can get and there is no such person, nor was there a "John" McQueen. Often times, the name John served as an unknown first name, much in the way of "John Doe".

Jerry McQueen had a large family with 3 different women. His relationship with Jane Ward requires closer scrunity and his brother, also of mixed race, married her sister Susan, which was also very unique for the time. The McQueens continue.